When it comes to travelling and trying to pack light, I always seem to run into a dilemma: cram the tripod in my bag or leave it at home. Ideally, I’d always want a tripod around for taking things like landscape shots or long exposures, but the bulky nature of most tripods usually means it’s the last item that gets cut from the trip. And as I get older, carrying heavy tripods around during trade shows on top of anything else I might be hauling around can mean the difference between days of aches (and a few paracetamol) and being able to work and sleep pain-free.

But with Peak Design’s new Travel Tripod it feels like I’ve finally found an answer to my problem. Weighing in at 3.44 pounds for the aluminium model or a mere 2.84 pounds for the carbon fibre version, the Travel Tripod is fantastically light. And if that lightness was the only thing it offered, it would already be a worthy competitor to other superlight tripods from companies like Manfrotto, Gitzo, and others.

What is it?: A super compact travel tripod

At $350 (£281), the aluminium Travel Tripod is slightly more expensive but also lighter than MeFoto’s £249 GlobeTrotter Classic, but it’s cheaper than Gitzo’s £630 895-gram Series 0 Traveler Tripod. Yet the Gitzo doesn’t include a head (which would tack on a little additional weight). So when it comes to price and weight, the PD Travel Tripod fits right in with the other top-tier tripods on the market.

Where the PD Travel Tripod really shines though is when it comes to design. Practically everywhere you look, there’s a thoughtful tweak that makes you appreciate how clever and carefully this thing was put together. Starting with its legs, instead of using legs made out of hollow tubes, Peak Design uses a vaguely trapezoidal shape that allows all three legs to curve around the tripod’s centre column, resulting in less wasted space and a much more compact overall package. And for me, this is one of the PD Travel Tripod’s biggest advantages, because between its light weight and dimensions that measure 15.4 inches tall and just 3.125 inches in diameter when fully collapsed, you’re looking at something that’s not much bigger than a water bottle. 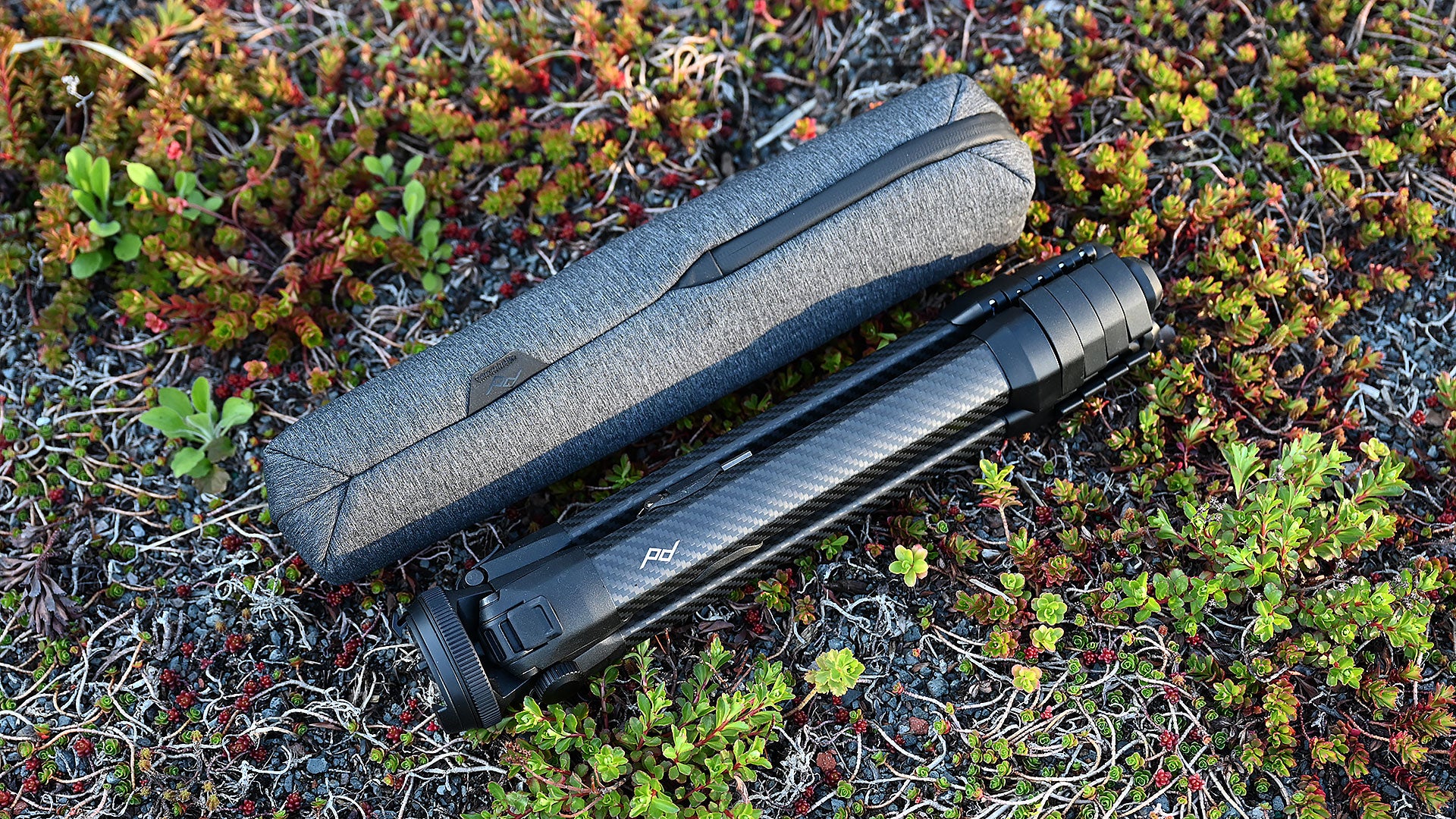 While the included soft case adds a tiny bit of weight, its built-in straps makes it easy to strap the tripod to the outside of a bag for easy carrying. (Photo: Sam Rutherford/Gizmodo)

That means you can easily stuff the Travel Tripod in the side pocket on your backpack instead of trying to stuff it into a carry-on or some other larger gear bag. Furthermore, unlike some of its competitors, you don’t need to fold the Travel Tripod’s legs 180-degrees up just to make it as compact as possible, which saves time when you’re packing up. And I’d be remiss not to mention that when compacted all the way down, the PD Travel Tripod feels really sturdy and is thin enough that you can use the tripod as a one-handed vlogging stick, even if your hands aren’t very big.

Then there’s the built-in ball head, which is so compact I didn’t know it was there at first. Unlike other tripods with built-in heads, the PD Travel Tripod doesn’t have a bunch of knobs or dials that stick out like a sore thumb, everything is neatly integrated into the tripod itself. To adjust the height of the centre column, there’s a retractable knob that pops out when you need it, or sits flush against the side of the tripod when you don’t. And when you want to adjust the ball head, there’s a super simple control ring which you can twist right to loosen, or left to tighten. With a listed capacity for cameras up to 20 pounds, you can use a wide range of cameras and long telephoto lenses without worrying about the ball head dropping your gear. 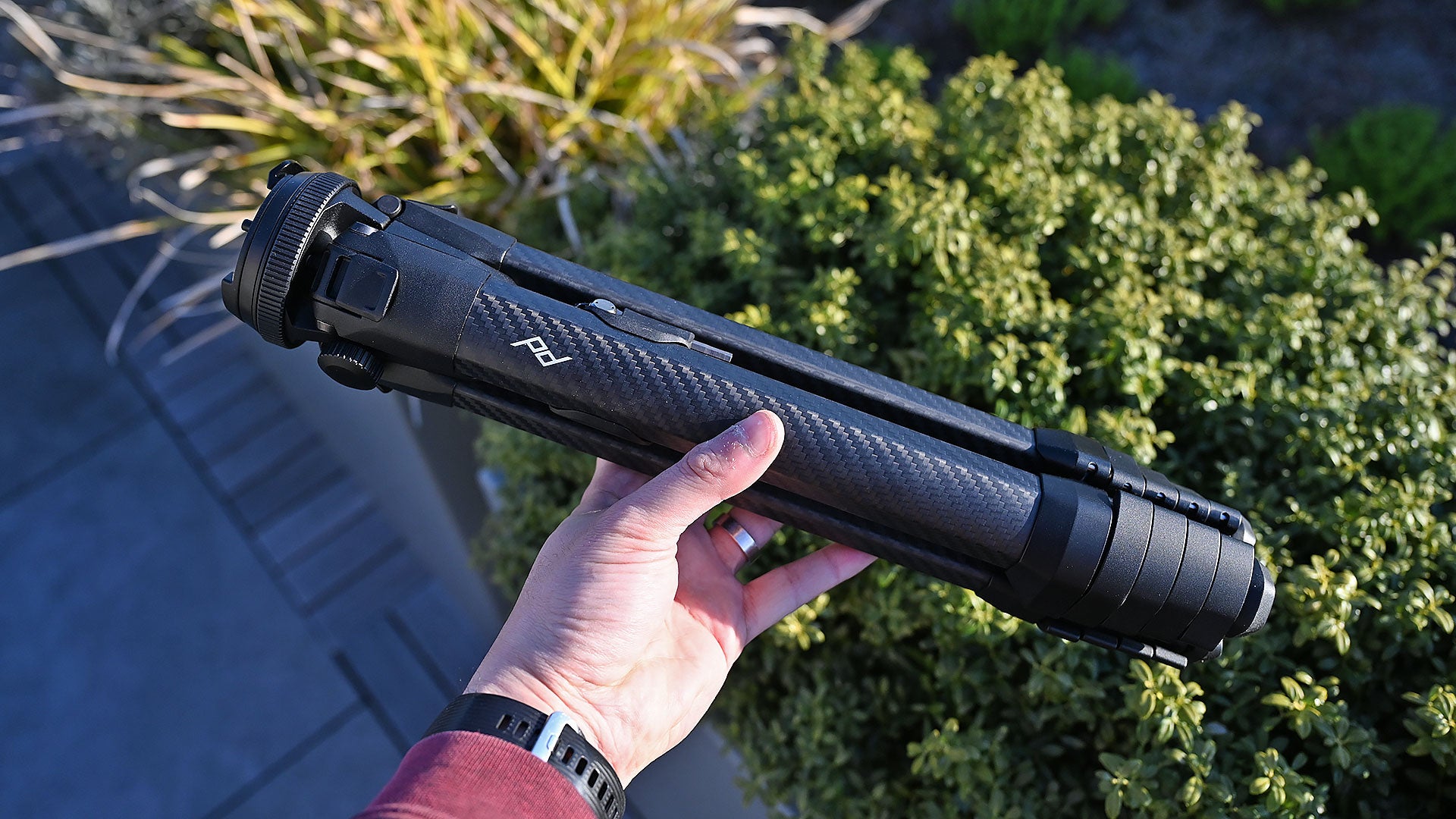 On top, the Travel Tripod features a small Arca Swiss compatible quick release plate that easily clips into place and features a built-in lock to make sure nothing accidentally falls off. There are even a couple standoff pins that you can remove with the included Allen wrench (more on that later) if you need to use a wider L-shaped Arca plate. That said, while a ball head is good for shooting stills, it doesn’t really offer the sort of fluidity or control you need to shoot smooth pans in video. Thankfully, you can get Peak Design’s $30 (£24) Universal Head Adapter and then put whatever head you want on there.

But perhaps my favourite little innovation on the Travel Tripod is found at the bottom of the centre column (which can also be flipped upside if you want to shoot straight down), where Peak Design has hidden a tiny smartphone mount. To access it, all you need to do is pull down and twist, and suddenly you get a springy extendable mounting bracket that can hold basically any phone on the market. (I tested more than 15 different phones, and they all fit just fine.) This allows the Travel Tripod to pull double duty for both your camera and phone, which is perfect for when you want to capture something quick for social media.

The carbon fibre model weighs just 2.81 pounds, but costs twice as much as the aluminium version which weighs 3.44 pounds.

The only phone I can think of that might not fit properly in the included smartphone mount is a Samsung Galaxy Fold. (Photo: Sam Rutherford/Gizmodo)

The control ring for adjusting the ball head is very simple and intuitive to use. (Photo: Sam Rutherford/Gizmodo)

You can use the built-in Allen wrench to remove those posts if you want to attach an L-shaped Arca plate. (Photo: Sam Rutherford/Gizmodo)

As for its legs, the Travel Tripod has five-section legs with simple clamps that allow it to stand 60 inches tall when fully extended, while the cams on each leg allow you to extend its legs out almost 90 degrees in case you need a wider, more stable setup. And while having five-sections on each leg might sound a bit finicky, even with almost zero practice, it’s easy for the Travel Tripod to go from fully compact to fully extended in under 20 seconds. All you have to do is grab all the levers on one leg at the same time, flip, and extend.

The Travel Tripod even comes with its own weatherproof soft carrying case which not only helps protect the tripod from standard wear and tear, it also has a couple of attachment points so you can easily strap the tripod to the outside of a bag. Peak Design makes a few optional carrying straps meant to work specifically with their bags, but if you have some spare rope, it doesn’t take much to tie it down to pretty much anything you want. 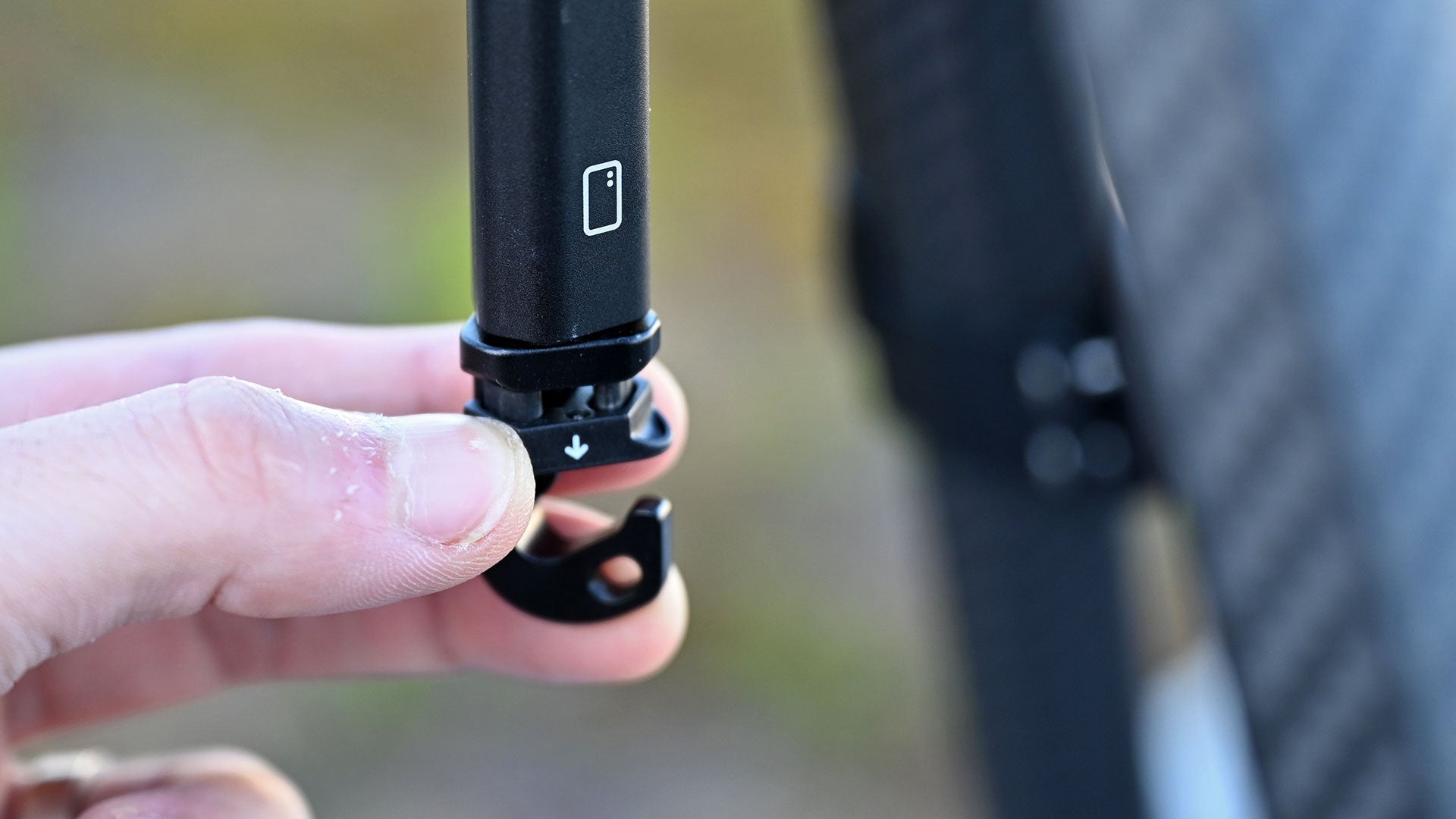 Peak Design’s hidden mount for smartphones is incredibly useful and something I would like to see on more tripods in general. (Photo: Sam Rutherford/Gizmodo)

All this said, the Travel Tripod isn’t perfect. The most obvious demerit is that the screw on the mounting plate requires a hex key to get it tight, there’s no slot where you could fit a coin or folding metal flap that would let you tighten it with your fingers. And while Peak Design does include a two-sided Allen key that has its own compartment built into one of the tripod’s legs, that’s still an extra step you need to take when trying to mount your camera. Somewhat more worryingly, the Allen wrench isn’t as securely attached as everything else on the tripod, and I did have it fall out once accidentally while using it. So if you’re concerned about losing the included Allen key, it’s best to just put the tripod back in its bag while travelling.

The other small consideration is that because the Travel Tripod’s legs are quite thin (especially the carbon fibre model), the tripod is somewhat prone to vibrations, which could result in slightly shaky or softer images. Thankfully, this is easily remedied simply by hanging a sandbag or a backpack from the hook at the bottom of the centre column. Also, while I appreciate that Peak Design included a built-in bubble level, because the level is positioned on top of the ball head, it’s difficult to see when mounting anything much bigger than a pocket-sized compact camera. 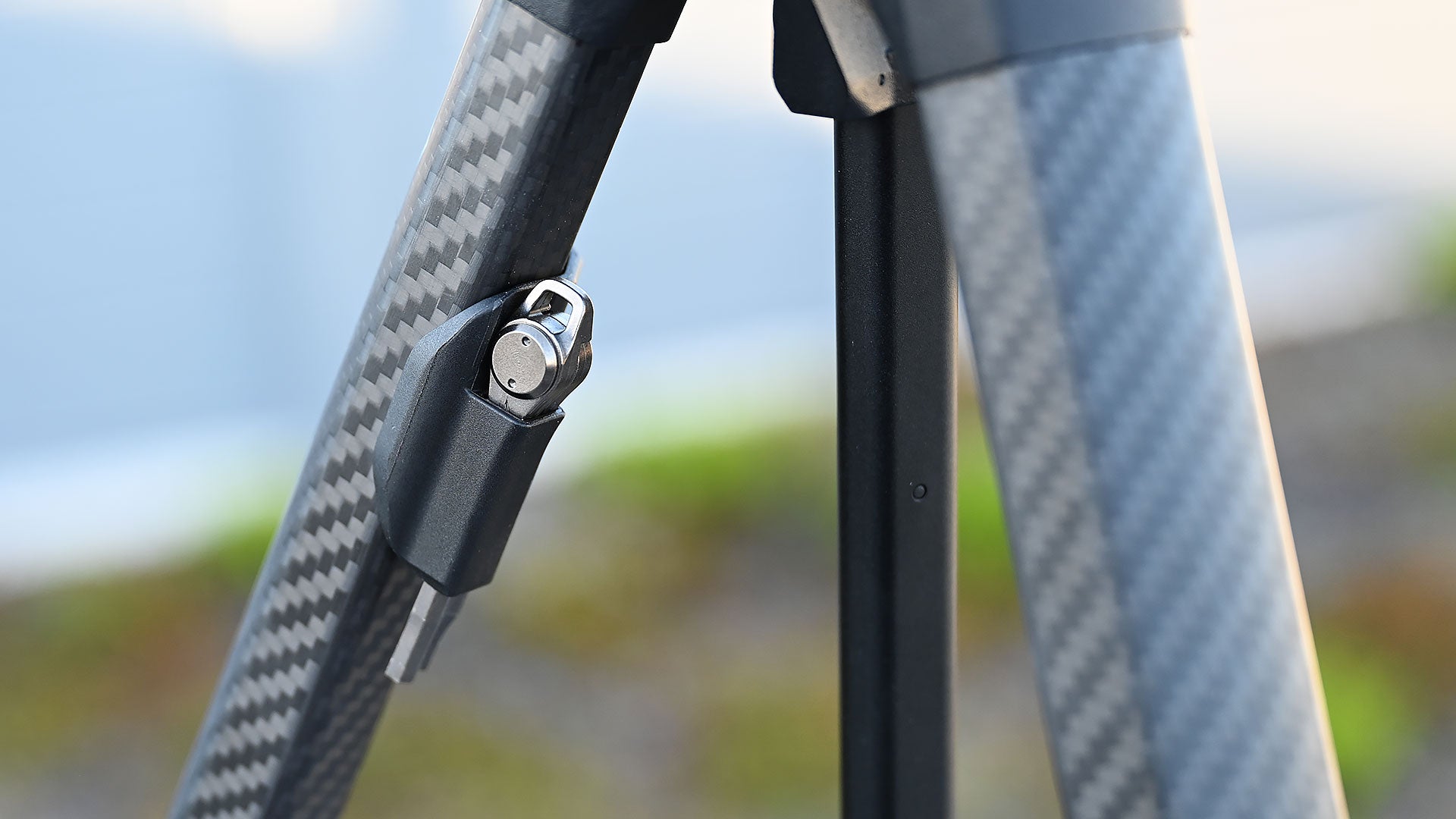 Yet the real impact of the Travel Tripod is that between its light weight and all the clever bonuses Peak Design has included, I’m no longer questioning whether or not a tripod deserves to go on a trip. I’m not worried about my back or how I’ll feel in the morning. I want to bring the tripod with me and see what it can help me shoot. In some ways, the Travel Tripod does what all really great gadgets are supposed to do, it gets out of the way and lets me focus on being creative, while sometimes letting me capture shots I simply couldn’t get any other way. The Peak Design Travel Tripod is more than deserving of a place in your gear bag. Next time, something else is getting cut to make weight.