Dell is running into a real issue with the XPS 13, though in this case, it’s a good problem. Over the past couple of years, Dell has tweaked and refined its flagship 13-inch laptop to the point that we thought last year’s model was practically perfect. And now, Dell has released the new XPS 13 9300 with a more useful 16:10 screen, a larger touchpad and keycaps, slimmer bezels, and even better performance. At this point, the new XPS 13's only significant shortcoming is that it has just two USB-C ports instead of three, though in return you do get a built-in microSD card reader. Pretty soon, Dell isn’t going to have anything left to improve, and even though this new XPS 13 isn’t completely flawless, there’s no doubt it’s the best ultraportable on the market.

In terms of design, the XPS 13 9300 is actually a tiny bit heavier and slightly smaller than the previous model, but the differences are so minute that even when holding both at the same time, it’s hard to tell. Around the edges of the laptop, Dell has opted for a shinier anodised finish that adds a bit of sparkle to the system without crossing the border into “Look at me!” territory.

What is it?: Dell's flagship 13-inch ultraportable laptop

You also get two USB-C ports with Thunderbolt 3 (one on each side) for transferring data and power, along with a headphone jack on the right and a new microSD card slot on the left. Typically, I like when laptops makers add built SD card readers on laptops, though on something like the XPS 13 whose main duty probably won’t be editing photos and videos, I think most people would prefer a third USB-C port instead – especially considering one USB-C port will usually be reserved for charging.

Speaking of charging, I appreciate that Dell includes two different plugs for the XPS 13's 45-watt power brick: one is a compact plug that you can jam right into the wall, while the other is a three-foot extension for when you need a little extra reach. However, with a battery life that lasted 9 hours and 59 minutes on our video rundown test, there’s a good chance you can make it through most or maybe all of your workday without actually needing to plug in. That time is half an hour better than what we got from the previous XPS 13 (9:26) and nearly three hours better than HP’s Envy 13.

You get two USB-C ports with Thunderbolt 3, one on each side of the laptop. (Photo: Sam Rutherford/Gizmodo)

Even though the XPS 13's bezels are tiny, Dell still managed to cram in a web cam and an IR cam for Windows Hello face login.

Up top, Dell has also stepped up to a new 16:10 display (from the 16:9 panel it was previously using) which might not sound like much, but gives the XPS 13 a much-needed boost in vertical screen real estate. At the same time, Dell kept the XPS 13's tiny webcams (which includes an IR camera for Windows Hello face login) while also decreasing the bezels around its 13.4-inch screen to the point that they are practically non-existent. Actual web cam image quality could be a tiny bit better, but it’ll more than suffice for all everyone stuck working from home right now.

For years, Dell has been talking about its Infinity Edge displays, but until now, there was always one side that was way fatter than the others which served as a strange disconnect between promise and reality. But for 2020, Dell has really delivered and the pay off is an extremely thin and sleek system with a screen that’s seven percent larger than before. 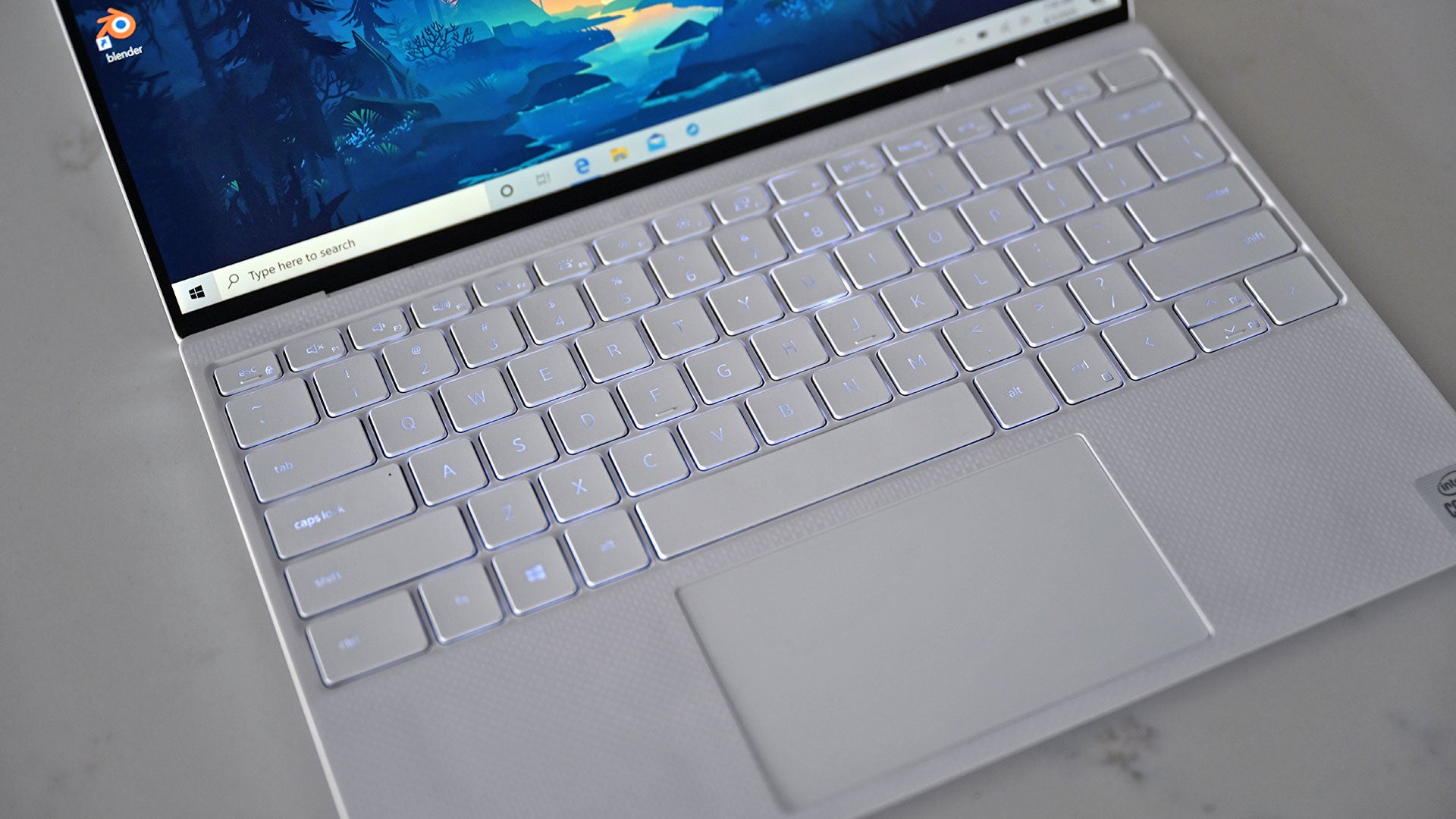 The XPS 13's backlighting could be better, but one interesting thing about the white model is that you can feel the weave of the fibreglass on the laptops deck, which is something that doesn’t happen if you go for the black carbon fibre version. (Photo: Sam Rutherford/Gizmodo)

And despite the 2020 XPS 13 having smaller dimensions than before, it also has a 17 per cent larger touchpad and slightly larger keycaps that deliver excellent bounce and key travel. And in light of Apple recently switching back to scissor switches on its new MacBooks, Dell not messing with the typing experience is something I’ve come to appreciate even more. One small critique I have though – and I realise I may be reaching a bit – is that the backlighting on the XPS 13's keyboard appears a bit uneven. Normally, something like that would barely even register as a complaint, but when there’s so little to nitpick and after seeing what a lot of gaming laptops makers are doing (including Alienware), I know there’s room for improvement.

For performance, the XPS 13 is no slouch either, as pretty much across the board, the XPS 13 beat out its competitors on both benchmarks and real-world tests including WebXPRT 2015 for measuring browser performance, Handbrake for video editing, and Geekbench 4 for overall metrics. And even when you’re really pushing it, the XPS 13 generally delivers stable performance, with the fans only whining a bit under full load. 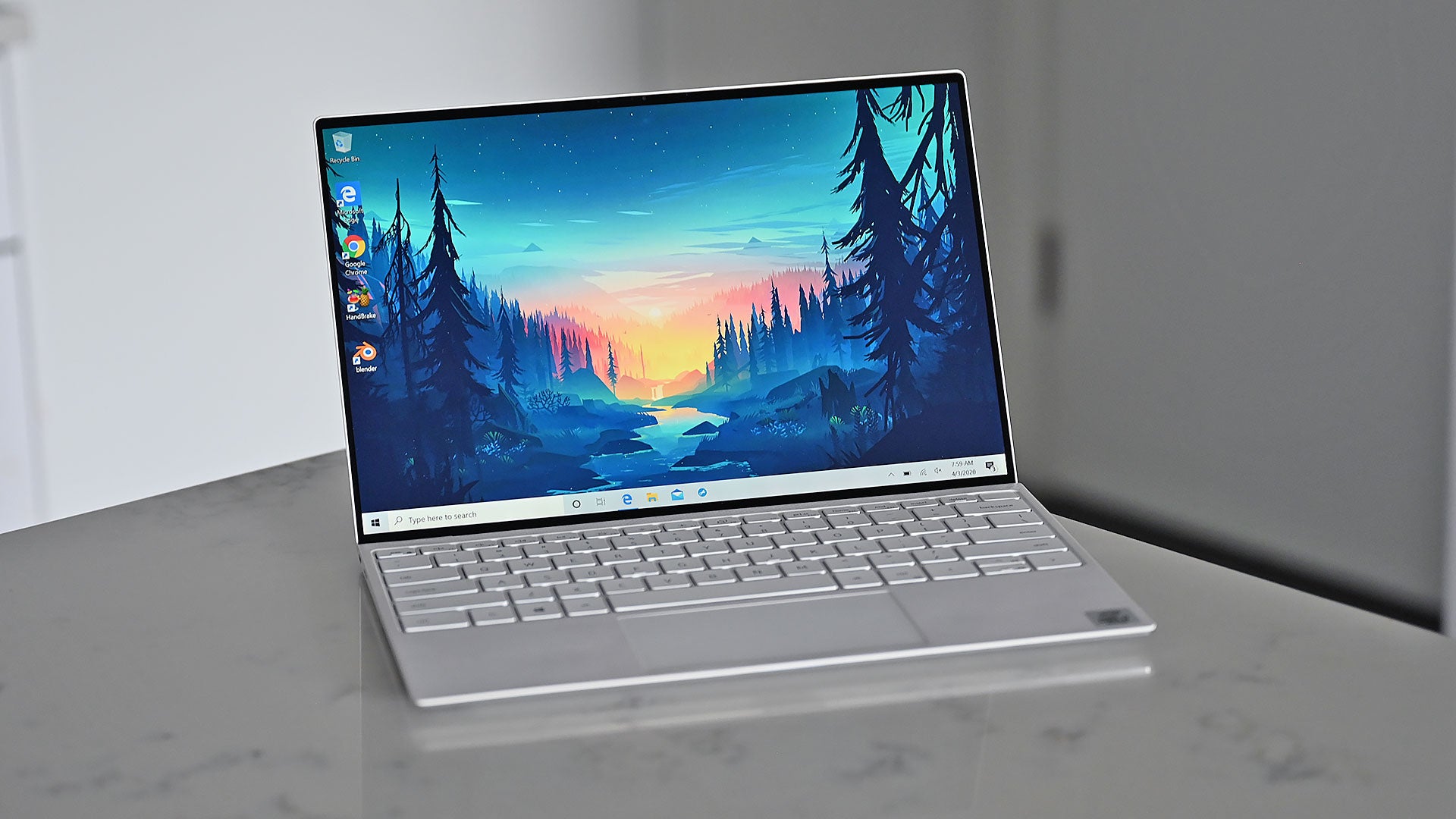 Admittedly, there are a couple of more enterprisey options that you won’t find on the XPS 13 like the built-in privacy screen found on some Lenovo and HP laptops or optional vPro CPUs, but for everything else, the XPS 13 is simply the best 13-inch ultraportable laptop you can get right now. Yes, depending on the config it can be a bit pricey and I wish it had just one more USB-C port. But the XPS 13's excellent build, iconic design, and strong performance is the result of years of polish, and now like its anodised aluminium sides, Dell’s 13-inch flagship laptop is really shining.