When Timex announced earlier this year that it was getting back into the smartwatch game, I was a little perplexed. That’s mainly because, at a glance, the new Ironman GPS R300 looks much more like the kind of smartwatch-fitness tracker hybrid that was popular back in 2016 than a device you’d relaunch a product line with in 2020.

It’s not just that the Ironman GPS R300 looks retro. But, I mean...the bezels. They’re gigantic! Then there’s the interface, which relies on a mix of buttons and swiping. The Timex app isn’t the worst I’ve used, but the device itself isn’t as zippy when it comes to syncing or installing over-the-air updates as newer fitness trackers and smartwatches. But overall, the Ironman GPS R300 isn’t offering anything you haven’t already seen in a GPS watch. It has push notifications, limited on-wrist coaching, a transflective colour touchscreen, music control, continuous heart rate-monitoring, and, of course, built-in GPS. It also tracks sleep. That’s all on par with other fitness trackers. But calling it a smartwatch? That’s a bit of a stretch. There’s no NFC payments, no app store, no third-party app integrations, no voice assistant capability – basically, the new Timex lacks most of the features you’d expect from a smartwatch in 2020.

What is it?: A running GPS smartwatch that feels more like a tracker

Don't Like: Beeps way too loud. Doesn't offer anything that really stands out. Limited coaching options. Interface is a little clunky.

I’ve been wearing the R300 for about two weeks now, and while I’m not a fan of its 1980s look, it’s lightweight and comfortable enough for 24/7 wear. It does what it’s supposed to when it comes to tracking workouts, even if the experience isn’t the smoothest. But this is a fairly mediocre watch, even if it’s quite affordable at $120 (£97). For reference, the Fitbit Charge 3 and the Fitbit Versa Lite  – two comparable alternatives to the R300 –are £130 and £150 respectively.

But there’s one thing the R300 truly excels at: battery life. In its announcement, Timex said this thing will last around 25 days on a charge with every feature enabled, and 20 hours with continuous GPS. At first, that sounded too good to be true. But my review unit came out of the box with 55 per cent battery, and I haven’t charged it in about two weeks. I still have 29 per cent left. Granted, I am not quite as active as I was pre-social distancing, and I turned off continuous heart rate-monitoring outside of exercise for that reason. Even so, I have been using GPS for at least 30 minutes per day for 15 days straight. Any way you slice it, the battery life on this thing is impressive.

While some people discount long battery life, in my experience it’s an important factor in whether someone is likely to stick with a wearable for any length of time. The less often you have to charge, the more likely you are to keep the device strapped to your wrist, which means you’ll get a better picture of your activity over time. I often forget I have the R300 on, and while I personally think it’s is an eyesore, it’s less likely to sit forgotten on my nightstand when I have a busy morning. I make a point of taking off wearables before I hop in the shower, but the R300 is water-resistant up to 50 metres, so you actually don’t have to.

But other than battery life, the R300 is also accurate at tracking GPS during your activities – although there is one caveat. It takes the watch a bit to find a GPS signal compared to your phone or other wearables I’ve tested. It’s nothing too major, but I found if I tried to start a workout and just stayed in place, the watch just wouldn’t pick up a signal. Conversely, if I started walking or running, about a half-block later I’d get a beep notifying me it had. Once or twice during testing, I forgot to hit the centre button on the watch’s right side to start the workout once I got that confirmation beep. That’s frustrating, and I feel like it could be prevented with a more thoughtful interface.

Three of the four buttons you use. They’re fine, but sometimes you can navigate by swiping and sometimes it doesn’t seem to register, so you have to use buttons. (Photo: Victoria Song/Gizmodo)

But I found the impact of the GPS lag on the overall distance recorded or my individual mile splits was negligible. The watch underreported by a few hundredths of a mile at worst. For instance, a 3.13-mile run on my phone was logged as 3.1 miles on the R300. Likewise, a 2.13-mile walk on my Apple Watch Series 5 was logged by the Timex as 2.08 miles. That said, being mindful of that lag and remembering to hit that record button results in more accurate results than when I skipped GPS tracking. On test runs where I felt too impatient to wait for GPS and opted to forego it, my results were way off. The watch logged a 3.4 mile run on my phone as 2 miles, which, at that point, it’s not worth recording. On GPS-less runs, I was able to edit the distance at the end, but that’s not helpful for people who are looking to run without a phone.

Technically you can run without a phone, but only if you like running in silence. You can control music from your wrist, but there’s no real way to load any offline playlists or pair Bluetooth headphones. You can also load “coaching” workouts onto the device with the app – a mechanism that I actually like, but the available options are limited and require more futzing around to customise than I’d prefer.

Heart rate-monitoring was accurate during exercise, varying from my Polar H10 chest strap by about 5 beats per minute at most – not too shabby. Sleep-monitoring was also fairly accurate when it came to logging sleep duration, what time I fell asleep, and when I woke up. However, I was somewhat baffled by the arbitrary scores the watch assigned me. On a night where my cat decided to yowl for no good reason at 5 am, the app told me I ended up losing over 2 hours and 12 minutes of sleep – but still gave me a score of 92. 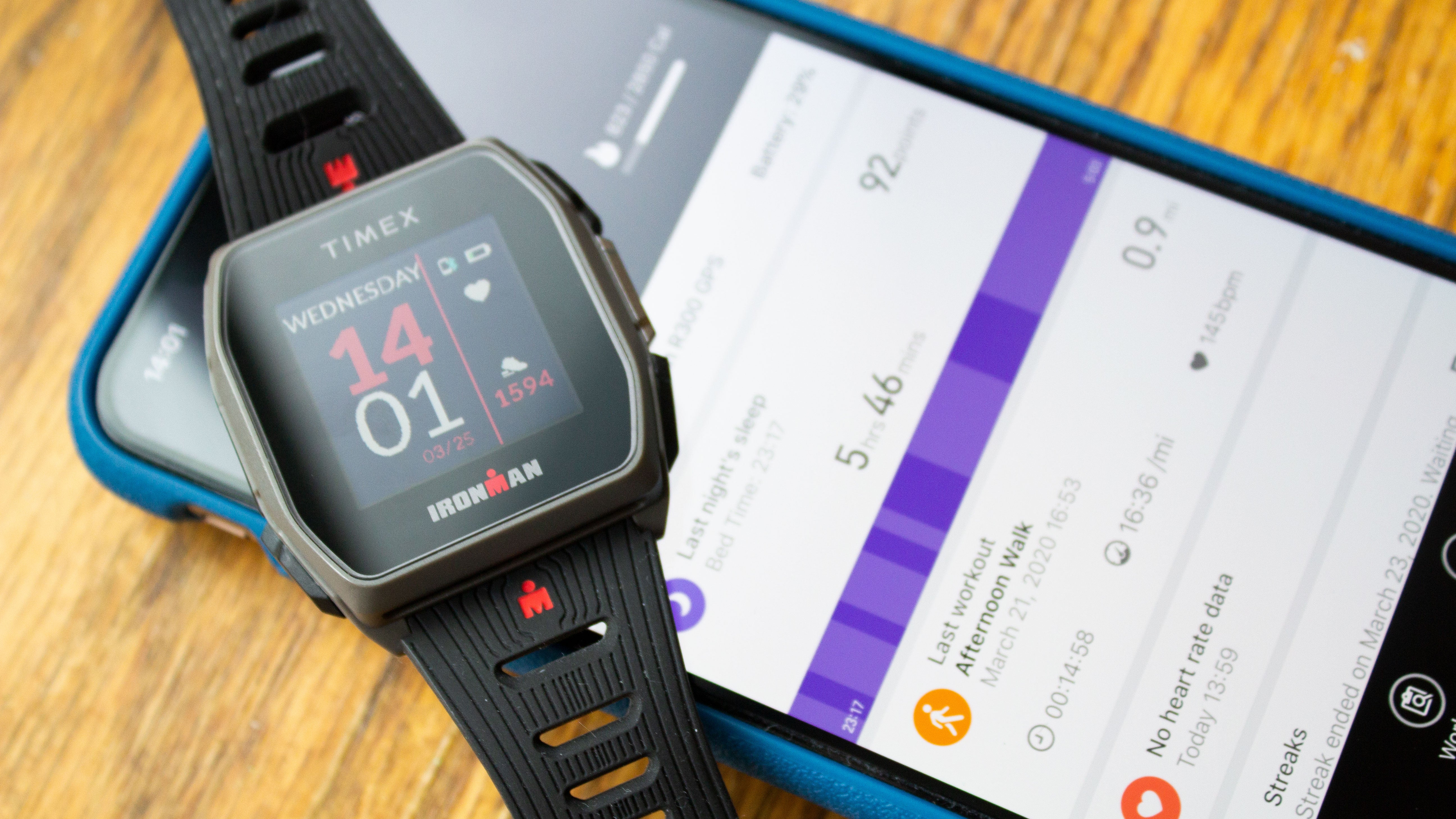 The app is also fine, though somewhat limited in comparison to competitors. (Photo: Victoria Song/Gizmodo)

Another thing I found irksome was connectivity. Syncing and over-the-air-updates with the R300 feel dated compared to some other smartwatches. It takes longer than it should, sort of like with older Polars and Garmins from a few years ago. Those syncing issues extended to notifications. Occasionally, I’d look down and see my watch had lost its Bluetooth connection to my phone. So while I was reliably getting notifications from my Apple Watch, I was missing out for hours at a time on the Timex until I reconnected. Not everyone will see this as a negative – lord knows I was actually grateful last week to be missing news alerts when notifications started triggering my anxieties. But if you want to see all of your notifications – apps, calls, texts, emails, and even disconnections from your phone – those have to be manually turned on. I did like that you can pick and choose which apps you got notifications from via the Timex Smart app, but the list to choose from wasn’t what I’d call comprehensive. Slack, for instance, wasn’t on there except as part of a blanket “other apps” option.

I eventually turned off the Timex’s notifications for a completely different reason. Each time you get one, the watch loudly beeps in addition to vibrating. It’s mostly fine when you’re working from home, but I found it annoying whenever I was on a video call or in the zone while writing a blog. Navigating settings in the Timex app isn’t hard, but I didn’t find any options to turn off sound under notifications. Even if I could, the vibrations on this watch are definitely audible compared to other smartwatches and fitness trackers I’ve tested.

Do you love the bezels? This is also as bright as the display gets on its transflective screen. That said, the 41mm watch is comfortable to wear 24/7. (Photo: Victoria Song/Gizmodo)

All in all, the Timex GPS R300 could be a lot worse. I’m just not sure what the play is here. The trend lately has been fitness-y, full-featured smartwatches, and more stylish hybrids for folks looking for more casual activity-tracking. Yes, the Timex is more affordable than some of its rivals, but it’s really only worth it if you want built-in GPS. Which, to be fair, some people do! But what you’re sacrificing in exchange for that is a more fully-featured app, a stylish design, and third-party integrations. If you’re a runner only looking for a basic watch with accurate built-in GPS, Timex is solid and cheap. For everyone else, there are better options.