Vanishing Exoplanet Might Actually Be the Aftermath of a 'Supercatastrophic' Collision

A known exoplanet has disappeared from sight, prompting speculation among astronomers that it was never a planet in the first place and is instead the shattered remnants of a celestial smash-up.

Now you see it, now you don’t.

A nearby exoplanet known as Fomalhaut b has gradually faded from view, which is obviously something planets aren’t predisposed to do. Well, unless an Imperial Death Star is making the rounds, which seems unlikely.

A more reasonable explanation, published yesterday in Proceedings of the National Academy of Sciences, suggests this not-a-planet is actually an expanding cloud of dust. The authors of the new study, led by András Gáspár from the University of Arizona, point to a “massive planetesimal collision” as the likely cause of the observations.

Fomalhaut b was first spotted by the Hubble Space Telescope in 2004 and confirmed as a massive exoplanet in 2008. This was a rare case in which an extrasolar planet was directly imaged rather than indirectly detected; in most cases, exoplanets are discovered when they cause their host stars to wobble or experience a temporary dip in brightness. Almost immediately, however, astronomers started to notice a few things about Fomalhaut b that left them scratching their heads.

In addition to having an unusually exaggerated orbit, this supposed exoplanet was surprisingly bright, yet with no infrared heat signature to speak of. It also featured a low mass, but it was growing in size. By 2014, the object had disappeared completely. Which, weird. 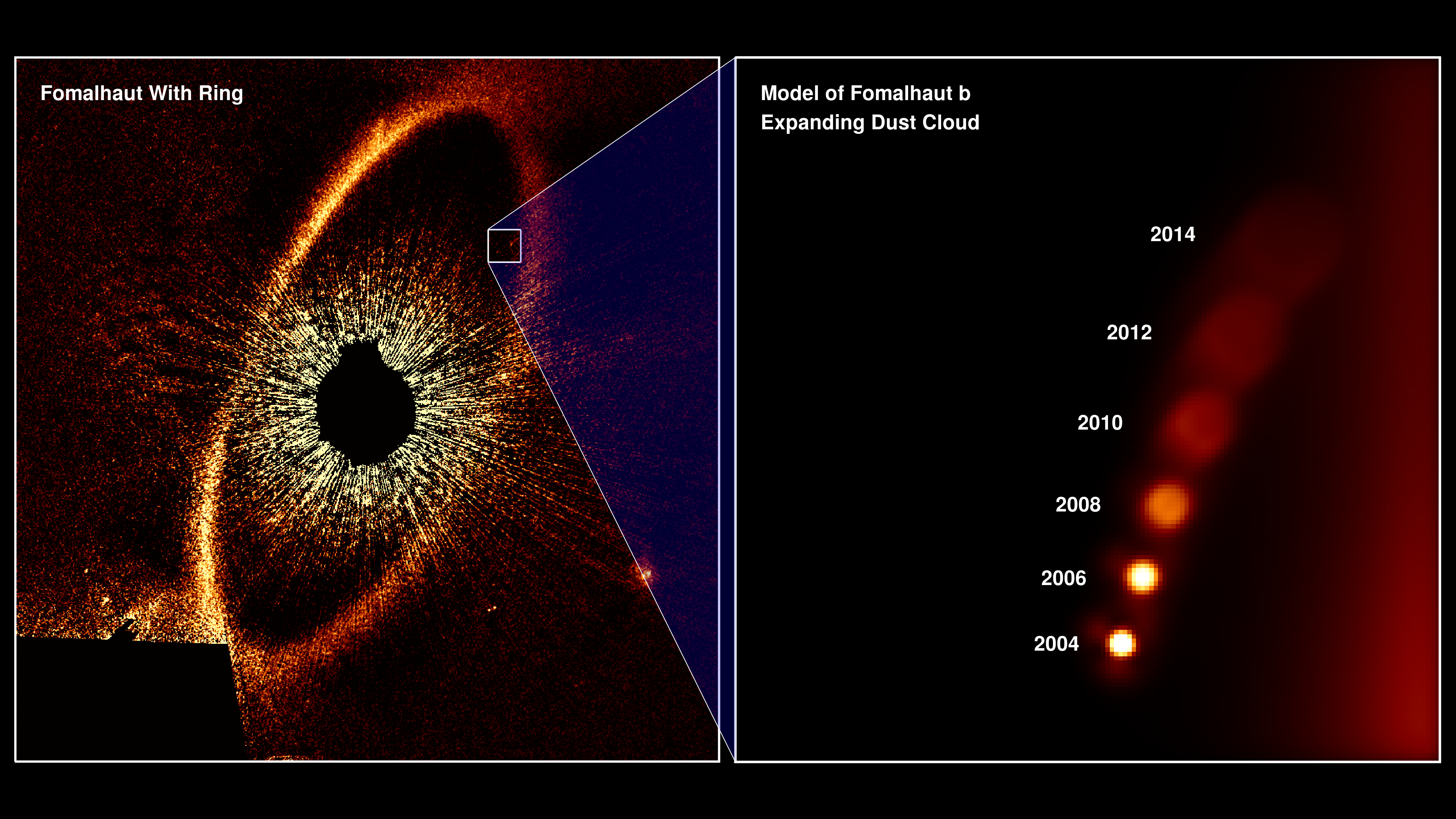 Left: The Fomalhaut system, including a massive debris disk (the dark splotch at centre blocks out the central star). Right: Observed changes to Fomalhaut b over time, showing gradual dispersal consisting with an expanding debris field. (Image: NASA, ESA, and A. Gáspár and G. Rieke/University of Arizona)

This combination of oddities sparked an investigation in which Gáspár, along with George Rieke, also from the University of Arizona, “analysed all available archival Hubble data on Fomalhaut,” resulting in the conclusion that this “planet-sized object may never have existed in the first place,” as Gáspár explained in a Hubble press release. The researchers looked at data from 2004 to 2014, including unpublished Hubble data from 2013 to 2014.

The hypothesised collision would have happened around 2004, which means Hubble chronicled this event from its very early stages. Two massive asteroids smashed into each other, creating a large dust cloud that is gradually dispersing, according to the new interpretation.

“While Fomalhaut b is not likely to be a directly imaged exoplanet, it is probably an extraordinary supercatastrophic planetesimal collision observed in an exoplanetary system!” wrote the authors in the new study.

Timelapse of the expanding dust cloud. (Image: NASA, ESA, and A. Gáspár and G. Rieke/University of Arizona)

These sorts of collisions are expected to be exceptionally rare, so Gáspár and Rieke crunched the numbers to determine just how rare. They modeled the conditions in the Fomalhaut system, which happens to host a significant debris disk filled with dust, asteroids, and planetesimals. Based on the density of this debris disk, the authors estimate that a smash-up like this should happen about once every 200,000 years.

Once every 200,000 years! That Hubble was observing this system shortly after the collision is an extraordinary occurrence and a colossal stroke of good luck.

A collision involving asteroids, or more accurately planetesimals, roughly 200 kilometres (120 miles) in diameter likely produced the observed results, the authors say. For comparison, Vesta – one of the largest objects in the asteroid belt – is 525 kilometres (326 miles) wide. This would have been one hell of a fender bender.

Other calculations show that the expanding debris field is on an escaping orbit – travelling away from the star such that it will not be pulled back in – not a highly elliptical orbit, as initially presumed.

“A recently created massive dust cloud, experiencing considerable radiative forces from the central star Fomalhaut, would be placed on such a trajectory,” explained Gáspár. “Our model is naturally able to explain all independent observable parameters of the system: its expansion rate, its fading and its trajectory.”

The debris field is now thin and dispersed, stretching around 1 AU in length, which is the average distance between Earth and Sun. Looking ahead, the astronomers plan to observe the system once the James Webb Space Telescope goes online. In addition to searching for actual planets around Fomalhaut, the scientists would like to analyse the chemical composition of the system’s prominent debris disk.