Brain geniuses like Elon Musk may want to colonise Mars, which sure. But for simpletons like me, keeping Earth mostly habitable seems like a better use of time and resources.

If carbon emissions are allowed to continue unchecked, though, that may be a tough proposition. According to a new study, extreme heat now only found in parts of the Sahara could spread to nearly 20 per cent of the globe (and nearly a third of humanity) if carbon emissions aren’t curtailed. The paper, published on Monday in the Proceedings of the National Academy of Sciences, makes a pretty compelling case to cut carbon emissions and not fry the world.

The authors of the new paper use a host of historical data going back 6,000 years ago to uncover just what conditions make humans tick. It turns out people can make do with all levels of rainfall, with humans living in all but the very driest places on Earth. Civilisation has also adapted to all types of soil fertility. The biggest limiting factor in terms of human habitation is how hot it gets.

The results of the study show people thrive in a narrow temperature band, where the average annual temperature spans 11 to 15 degrees Celsius, or roughly the 50s if you’re into Fahrenheit. It’s in that belt where many staple crops grow best and livestock can be highly productive, and it’s why the authors define it as the “human climate niche.” That’s not say there aren’t other confounding factors for human thriving, but temperature is one of the key elements linked with well-being.

Unfortunately for us, there’s a shock on the way if climate change continues unchecked. We’re already seeing the toll rising heat is taking on people around the world, from heat wave-related deaths to billions of hours in lost productivity because it was simply too hot to be outside. Still, humans have made it work in many hot places, from the southwestern US to New Delhi to Dubai. But eventually, climate change could overwhelm us.

The study uses RCP8.5, a scenario where carbon emissions rise on an extreme level, to model what the end of the century would look like for our little human climate niche. The results show it would contract substantially. The Sahara is one of the only places on Earth where the annual average temperature cranks above 29 degrees Celsius (84 degrees Fahrenheit) and where the human climate niche basically ends. The areas with that much heat only cover 0.8 per cent of the world’s land. But by 2070, that type of heat would become commonplace over nearly 20 per cent of land on Earth. That area is home to up to 3 billion people who, if they don’t migrate, will be living in conditions humans have never been able to tolerate for year-round existence. 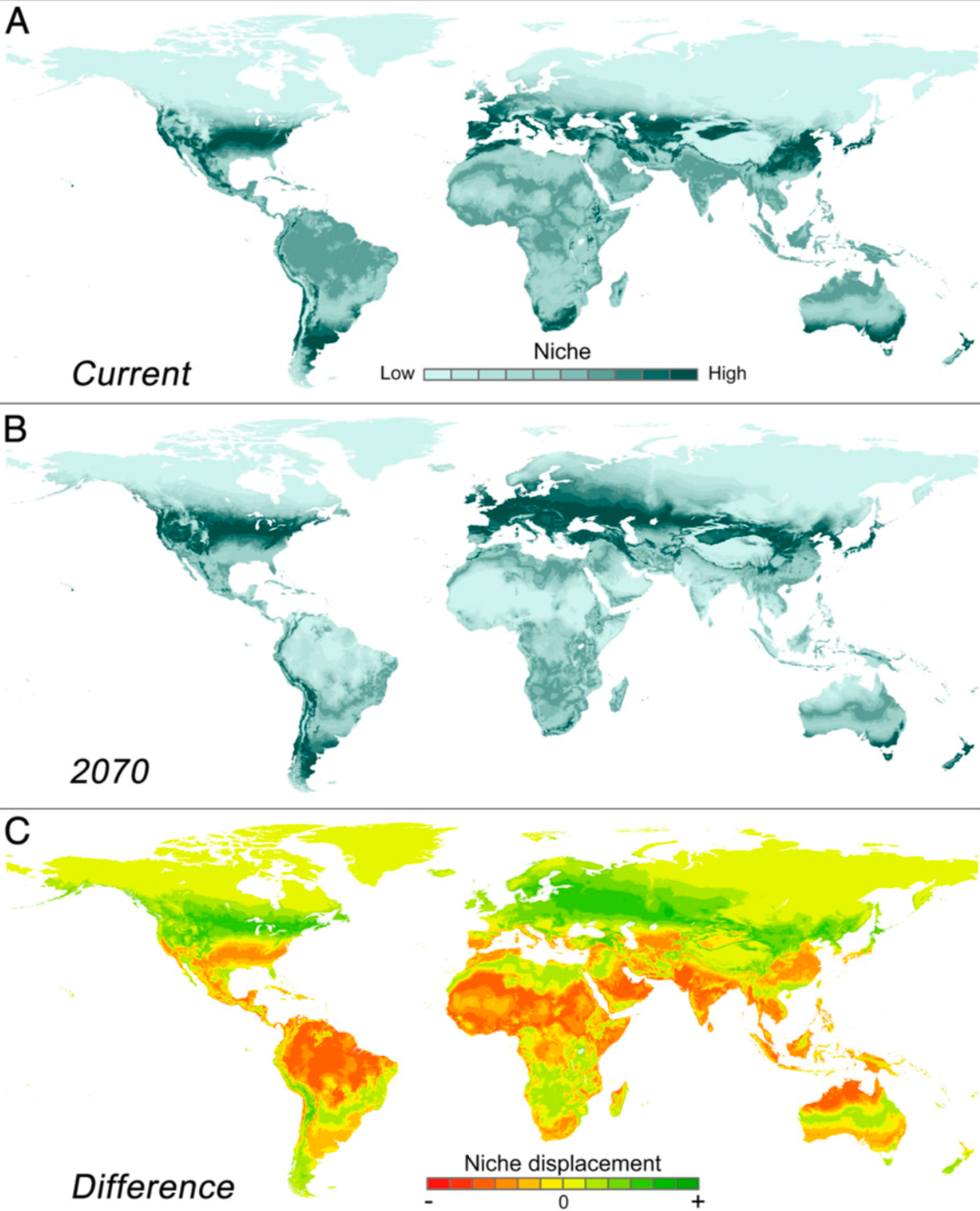 What’s more, this spike in temperature over the intervening 50 years will be more dramatic than anything experienced in at least 6,000 years. You know, the period where human civilisation really hit its groove.

The results are truly shocking in map form. Nearly all of Brazil will become essentially uninhabitable, as will huge chunks of the Middle East and India, showing the poorest areas will be hit the hardest. But the impacts aren’t limited to developing countries; the southern US, parts of Australia, and Mediterranean Europe will also see temperatures beyond the niche. The flip, though, that North America and Europe will also make habitability gains. When scientists found last year that we were all going to want to move to Siberia by the end of the century, they weren’t kidding.

That’s what’s most alarming about the results. They show that, absent curbing emissions, there will almost certainly be mass migrations out of the hot zones. It won’t all happen in 2070 like a switch flipped. Rather, some areas will pass the climate niche threshold first, potentially triggering waves of migration. The results show that, first and foremost, we need to start cutting emissions now. But just as important is the need to prepare for climate-induced migration in the future. And not in the ecofascist kind of way.