The Bluetooth keyboard turns the iPad Pro into a touchscreen laptop in a way I never really thought would happen, given Apple’s stance on touchscreen laptops. I’ve used the new iPad Pro paired with the fabric-covered Smart Keyboard Folio case and the Magic Trackpad, the combination of which approximates the Magic Keyboard’s functionality, but feels more like a workaround than an experience that just works.

Starting at £300, the Magic Keyboard is expensive as hell. But using this thing is damn near delightful, which is a sentence I can’t believe I just typed. But it’s true.

What is it?: Apple’s priciest Bluetooth keyboard for iPad Pros

Like: Floating design that allows you to tilt the iPad for easier viewing; satisfying key travel; responsive trackpad; makes the iPad Pro more like a laptop.

I’ve come to view Apple’s last attempt at an iPad Pro keyboard, the Smart Keyboard Folio, as my nemesis. Particularly after a recent 2-week-long stint using that keyboard case with a 12.9-inch iPad Pro as my work machine. Even alongside with a Magic Trackpad taking advantage of iPadOS 13.4’s support for trackpads and mice, the Smart Keyboard Folio felt like Apple’s half-hearted attempt to make the iPad Pro more usable. Typing on the fabric-covered keys is a mushy nightmare, and a separate trackpad isn’t exactly ideal for a portable machine. (The trackpad needs its own carrying case, and while I appreciate that level of extra, it’s not ideal when I travel for work.)

The Bluetooth Magic Keyboard instantly pairs to the iPad Pro when the Smart Connector magnets align and snap together. Unlike the Smart Keyboard Folio, the Magic Keyboard has a trackpad beneath the space bar the way god herself intended and elevates the iPad above the keys with a floating cantilevered design that allows you to subtly adjust the angle of the screen. And I do mean subtle – you can adjust the iPad back and forth by just 130 degrees – but it works for me. It’s so thoughtful that I almost resent Apple for waiting a trillion years to release this thing. Another thoughtful touch is the placement of a charge-through USB-C port on the left hinge, so you can use the iPad’s USB-C port for peripherals and still charge up.

The keyboard sports a USB-C charging port that allows for charge-through, freeing up the iPad’s USB-C port for peripherals. (Photo: Caitlin McGarry/Gizmodo)

I’m not one to extol the virtues of key travel, but this just feels good to type on. (Photo: Caitlin McGarry/Gizmodo)

I prefer typing on the Magic Keyboard to typing on any other Apple device in my life right now, including the Smart Keyboard Folio and a 2017-era 13-inch MacBook Pro with cursed butterfly keyboard. The Magic Keyboard’s scissor keys with 1-millimetre travel feel satisfyingly clicky. Apple just finished updating the entire MacBook lineup with Magic Keyboards after years of complaints (for good reason), so it’s nice that iPad Pro users get the same refreshed typing experience. The only downside is that the iPad Pro and Magic Keyboard together weigh 3 pounds, which is heavy if you’re accustomed to using a MacBook Air. Yet it weighs the exact same as my MacBook Pro.

I love the Magic Keyboard’s design and feel, but what I really wanted to know when I started using it was how it would change my experience using an iPad. With other iPad accessories, I always felt like I could probably get most things done if I just changed a few habits. Only I just...don’t want to do that. For instance, you have to change how you multitask on the iPad – sometimes I just want to cycle through layers of open windows without sliding an app over or snapping it to the right side of my screen. But the Magic Keyboard has changed my attitude toward working on an iPad, because I feel like I’m using a MacBook with a touchscreen – most of the time.

There are a few apps I rely on for work that are easier for me to use on the Mac than the iPad, but I hope that divide will continue to shrink with time. I’m also still trying to figure out a way to make the iPad’s multitasking features work for me (I’ve seen others do it, so I believe in myself!). But the Magic Keyboard turns the iPad into an almost-not-quite-but-so-close laptop when I need it, with the ability to accomplish tasks by touch when I want to. Now when I reach for my MacBook, I often thoughtlessly swipe on its screen, which is truly embarrassing every time it happens. I can see myself using the iPad Pro with Magic Keyboard on a plane one day when air travel is a thing we’re not terrified of anymore, getting work done and then binging a show I’ve downloaded from Netflix to pass the time. (Quarantine has made my daydreams extremely boring. Sorry.) 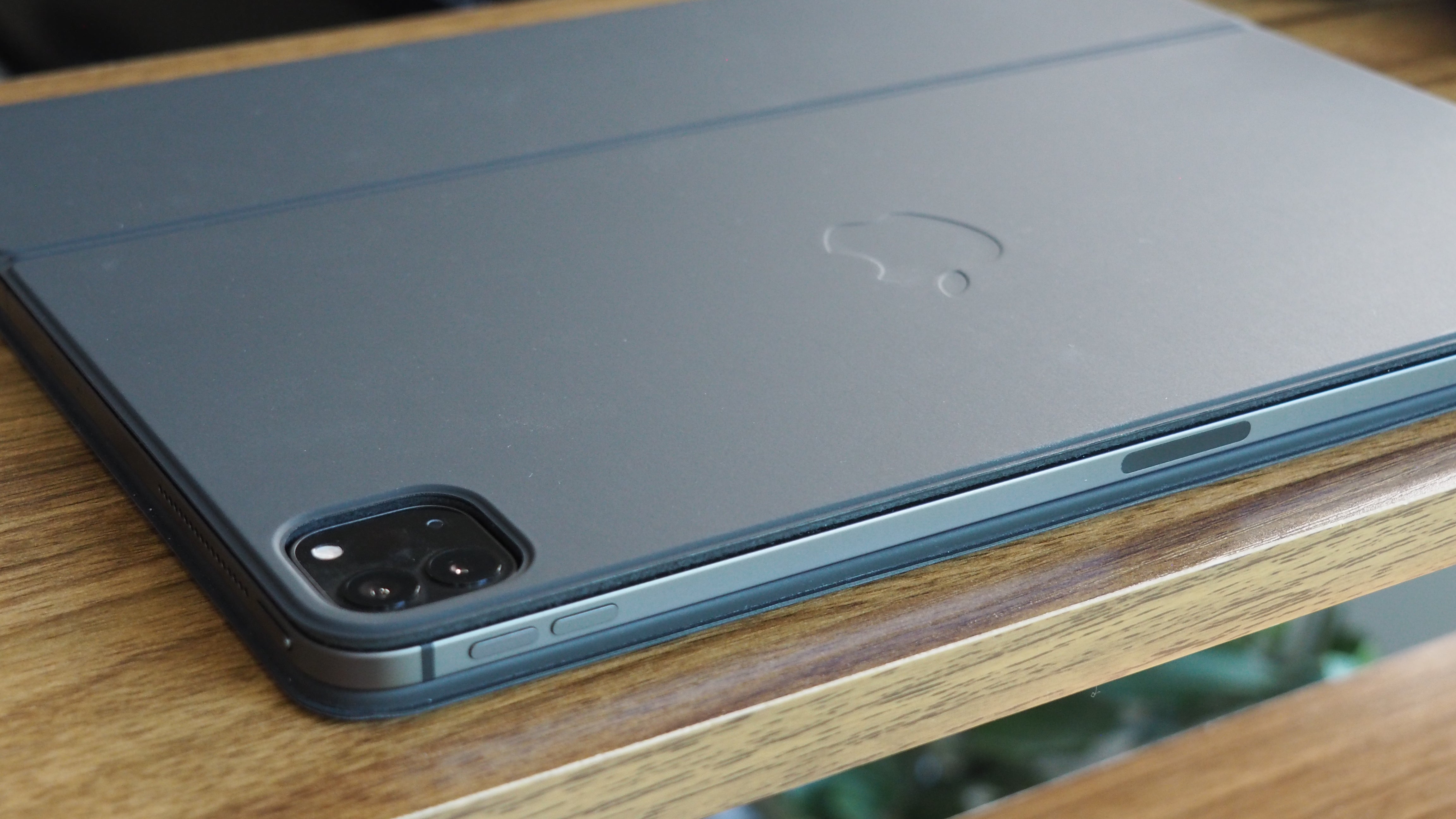 My dream is to tote this on an aeroplane to work and watch movies. (Photo: Caitlin McGarry/Gizmodo)

Some might be thrown off by the inability to lay the Magic Keyboard flat or to tent it, as you can with the Surface Pro and the 2-in-1 laptops from Apple’s rivals. But that doesn’t bother me. When I want to use the iPad as an iPad, like when I’m reading an ebook or mindlessly shopping online, I simply pull it from the keyboard.

But let’s address the biggest issue: the Magic Keyboard’s price. Apple provided me with the £350 version compatible with the 12.9-inch Pro, and, frankly, I balk at that, despite how much I love this thing. Brydge announced its own keyboard-with-trackpad combo accessory for iPad Pros that starts at £190 for the 11-inch version, which could be a worthwhile alternative (stay tuned for a review). And for those who want a keyboard/trackpad case without buying a pricey Pro, Logitech recently announced its own version for cheaper iPads. (We’ll be testing that one out, too.) But, look, Apple products are designed to work seamlessly together and the Magic Keyboard does exactly that. It’s expensive, but it offers such an amazing experience – from pairing to typing to charging – that I recommend it, despite the high price.

The Magic Keyboard is the first Apple product since AirPods that just feels...pleasant to use. No thought required. It just works. If you buy an iPad Pro, you need to buy this accessory. It will actually improve your life, even if it’ll hurt your bank account.