It’s neither an asteroid nor a comet but something in between. It’s also parked within Jupiter’s orbit, making this object the first of its kind to ever be detected.

Say hello to 2019 LD2, the only active Jupiter Trojan known to science. Trojans are a large group of asteroids located in the same orbital path as Jupiter, and they’re all dead, inert asteroids – well, except apparently this one, which now boasts a very comet-like tail, according to a press release put out by the University of Hawaii’s Institute for Astronomy.

Small-bodied celestial objects tend to be categorised as either asteroids or comets. Asteroids are fairly boring, but comets – often described as dirty snowballs – shed their volatile surface materials when venturing close to the Sun. This creates a visible tail and a glowing coma around the nucleus.

But there’s a kind of in-between class of objects, known as active asteroids. These are asteroids that have suddenly sprung to life, such as the self-destructive, wildly spinning asteroid (6478) Gault.

As its name suggests, 2019 LD2 was discovered last year, specifically in early June. It was spotted by astronomers at University of Hawaii’s Asteroid Terrestrial-impact Last Alert System (ATLAS), which is typically used to find Earth-threatening objects. Sometimes, however, it finds harmless astronomical curiosities, like this one.

When 2019 LD2 was first spotted, its fuzzy appearance led to suspicions that it might be a comet or at least comet-like. A collaborating team from Queen’s University Belfast supported these suspicions. A second set of ATLAS observations in July 2019 strengthened the case, with images revealing a faint comet-like tail, likely composed of gas and dust. Observations in late 2019 and early 2020 showed that 2019 LD2 remains active, according to the press release.

Active asteroids are rare, but the discovery of an active Jupiter Trojan is unprecedented. The gas giant has two massive swarms of asteroids along its orbital path, one out front and one behind. Jupiter amassed these celestial groupies over a billion years ago, thanks to its tremendous charm, otherwise known as gravity. 2019 LD2 is located in the Trojan clump ahead of the planet. 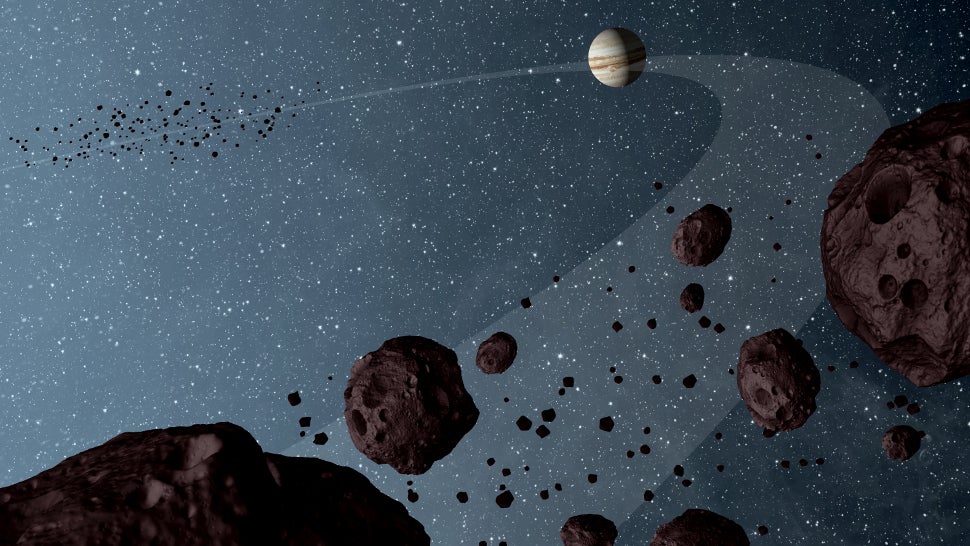 Artist’s impression of the Jupiter Trojans (not to scale). (Illustration: NASA/JPL-Caltech)

This discovery is a bit perplexing, because Trojan asteroids, due to their extreme age, should have surfaces sucked dry of volatile materials like water ice. They should be dead and boring like the vast majority of other asteroids, but the discovery of a lone active Trojan suggests something else might be going on – namely the sudden exposure of deeper materials to the surface.

“We have believed for decades that Trojan asteroids should have large amounts of ice beneath their surfaces, but never had any evidence until now,” said Alan Fitzsimmons, an astronomy professor at Queen’s University Belfast who’s been studying 2019 LD2, in the press release. “ATLAS has shown that the predictions of their icy nature may well be correct.”

As to how these deeper layers became exposed, the object could have experienced a landslide or smashed into a smaller asteroid. Another possibility is that this object only recently joined the Trojan community, having drifted in from farther away, where it was able to retain its surface volatiles. The scientists don’t know, but they’re going to keep their eye on 2019 LD2.

Excitingly, NASA will be launching a probe to visit the Trojan asteroids. Called Lucy, the spacecraft will investigate a half-dozen Trojans between 2027 and 2033. This mission will shed new light on these mysterious objects, including their chemical composition and how they found themselves within Jupiter’s orbital path.