Meeting up with friends and family is difficult (if not impossible) right now, which is why we’re all experimenting with different ways to keep in touch. Not every form of communication has to be a live video chat, though – there are tonnes of options that allow you to leave audio and video messages for friends and family any time.

If you don’t have the time or the patience or the internet speed for a Zoom or FaceTime, think about leaving video (or audio) messages instead. You’re probably using some of these apps already, and you can use them in different ways to leave notes for those you love. Who knows? You just might brighten someone’s day.

Marco Polo goes all in on the idea of asynchronous video chat, prioritising prerecorded messages that you can then respond to as quickly or as slowly as you like. It’s like exchanging text messages, but you’re sending video clips back and forth instead.

Marco Polo supports groups of up to 200 people, if you want to keep a family or friend group together in the app. Video chats are all kept together, ordered chronologically, along the bottom of a group or individual conversation window.

Just dive into any conversation and hit Start to begin recording, then tap Stop when you’re done. It gets sent just about instantly, but you can long press on a video thumbnail to forward it to someone else or another group, or to delete it from the chat record. 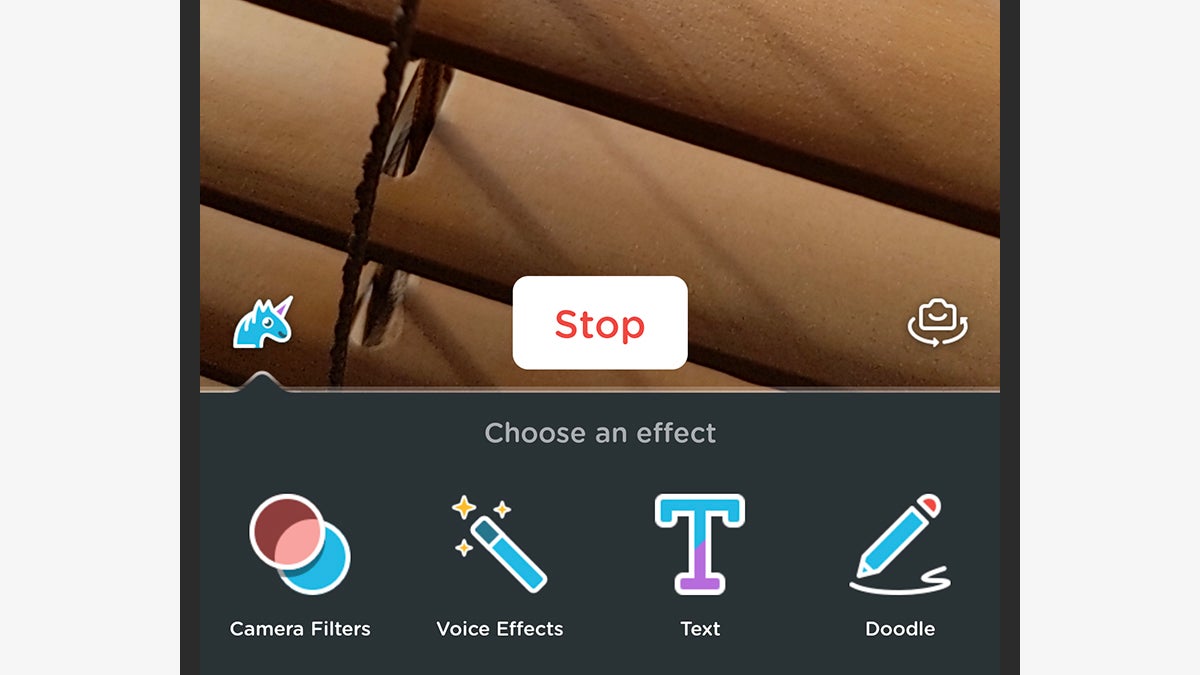 Marco Polo has filters for your video and your voice. (Screenshot: Gizmodo)

You do get a few filters and fun effects to play around with, though Marco Polo doesn’t go as sticker and filter crazy as some of the other apps we’re covering here. You can also load up photos and videos already saved on your phone if you don’t want to record live.

Snapchat is perhaps best known for disappearing photos and Stories (though Instagram has since stolen its spotlight). But the app lets you send video messages, too. Video clips that you send to contacts will vanish after they’ve been viewed, so it’s perfect if you don’t want to leave any trace of your message.

You can send video messages to a specific person from the Chat screen (swipe right from the camera view). Tap on the contact name (use the search box if you need to), then the Camera button (lower left), then record your video by holding down the Shutter button. 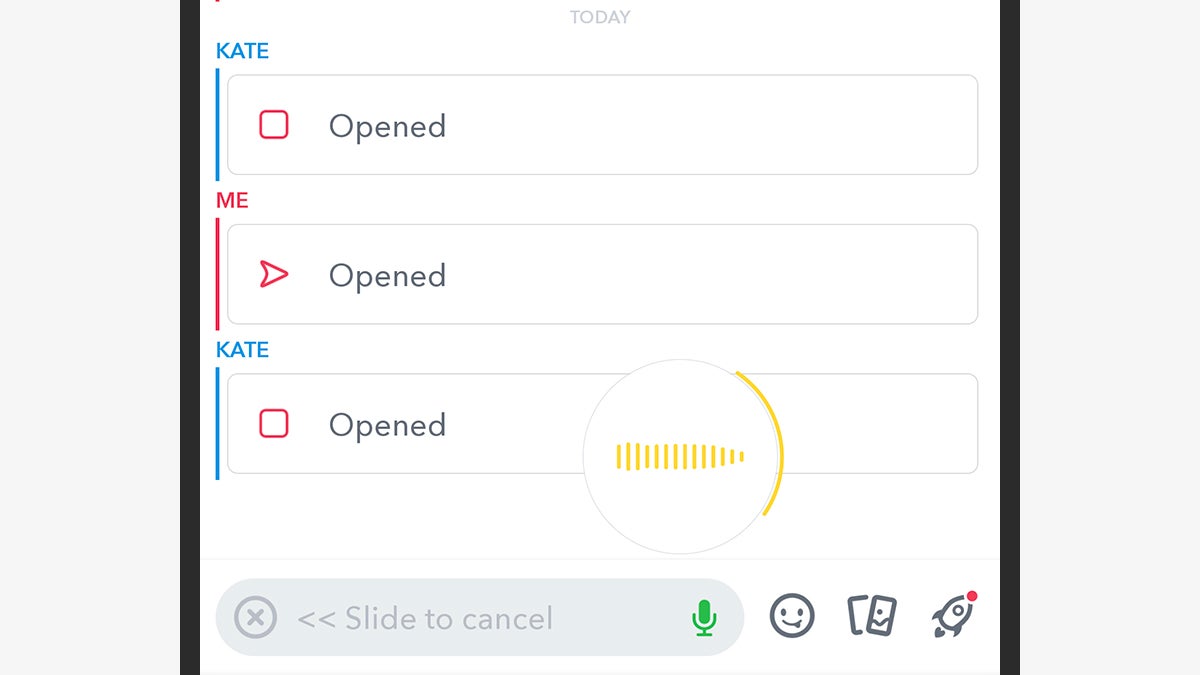 Tap and hold the microphone button to send audio in Snapchat. (Screenshot: Gizmodo)

As usual with Snapchat, you can add text and annotations and stickers needed. The recipient can view and replay it once, but after that it’s gone forever (you can’t save videos like you can text). To send a video to a group, just add multiple contacts before recording.

Audio works in a similar way, but you need to dive into a chat with an individual or with a group first. At the bottom you’ll see a Microphone button: Tap and hold this to record an audio message, which will automatically erase itself (like the videos) once it’s been played.

Instagram gives you a variety of video options, but if you want to send a specific video to a specific person, then you need to dive into your DMs. Tap the paper aeroplane Send button up in the top right to get started.

Pick a contact from the list or use the Compose button (the pen in a box, top right) to search for one. Once you’ve done that, you’ll see your recent exchanges on screen. Tap the Camera icon (lower left), which will take you to the Instagram Stories capture screen. 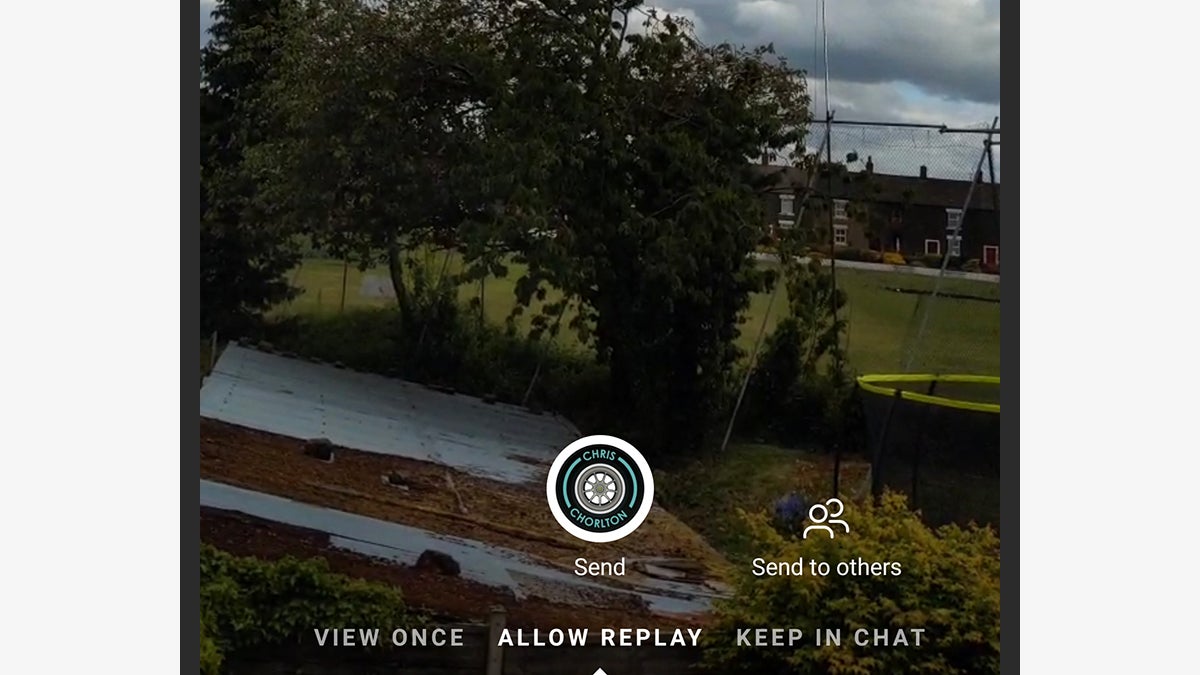 Instagram lets you choose whether video messages get deleted or stick around permanently. (Screenshot: Gizmodo)

In the Normal mode, press and hold the Shutter button to record a video, and when you’re done you can add stickers and text if needed. Unlike with Snapchat, you also get to choose whether the video will disappear after viewing or remain in the chat conversation.

At the bottom of every conversation is a Microphone button: Tap on this to record a brief bit of audio, which always stays permanently in the chat. As on Snapchat, you can send these videos and audio clips to group chats as well as individuals.

WhatsApp can handle just about every form of conversation – you can make live video and audio calls through the app, but if live chatting isn’t possible, then it’s easy enough to leave recorded video messages and audio clips in the app.

Open up the contact conversation or the group chat that you want to send your message to. To shoot a video, tap the Camera icon down in the lower-right hand corner, then press and hold the Shutter button to record a clip. Tap Send when you’re happy with it. 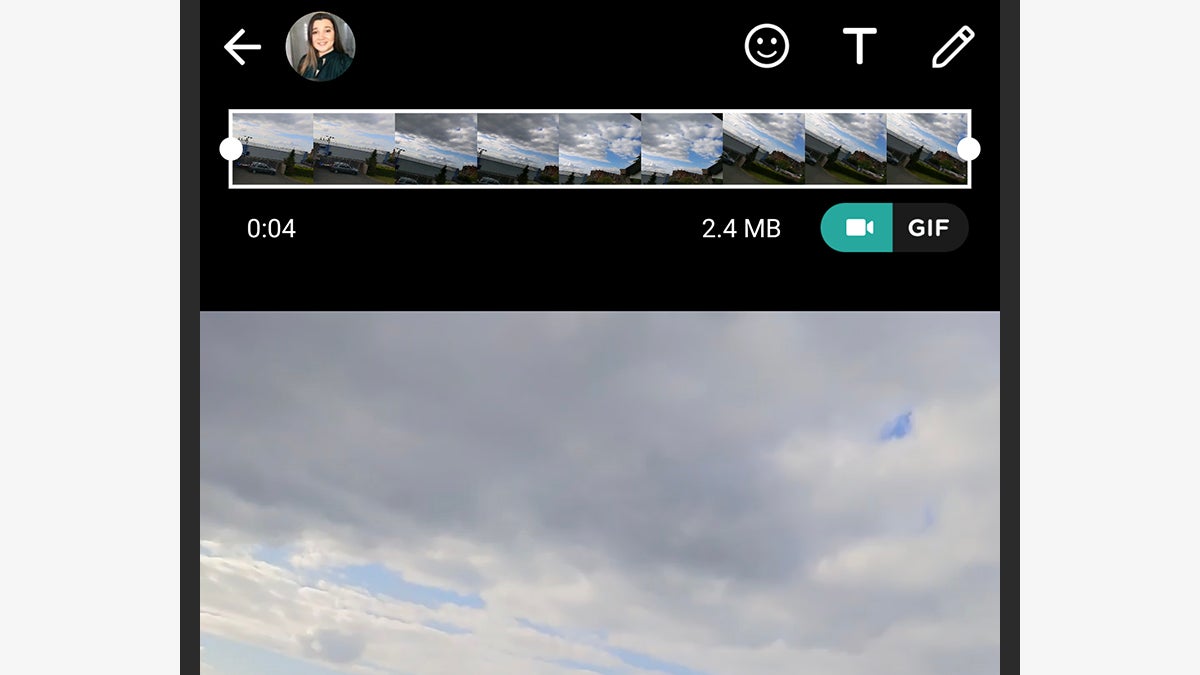 As you’ll notice, WhatsApp offers a mini video-editing studio right after you’ve finished recording. You can trim the edges of your video to shorten it, you can drop on stickers, text and scribbles, and you can even convert the whole thing into a GIF if you want.

To send an audio clip, tap the Microphone just to the right of the Camera button at the bottom of conversation threads. Press and hold to record, and slide up to ‘lock’ the recording (which means you can carry on recording without holding down the button).

Facebook wants Messenger to be your one-stop stop for all communications, so there are a plethora of tools available every time you open up a conversation. Video and audio clips can be posted to individuals or to group chats.

To shoot a video, tap the Camera button on the lower left inside a conversation (or in the top right corner on the conversation list view). Use Normal, then press and hold the Shutter button to record video, or switch to the Video mode for one-tap recording. 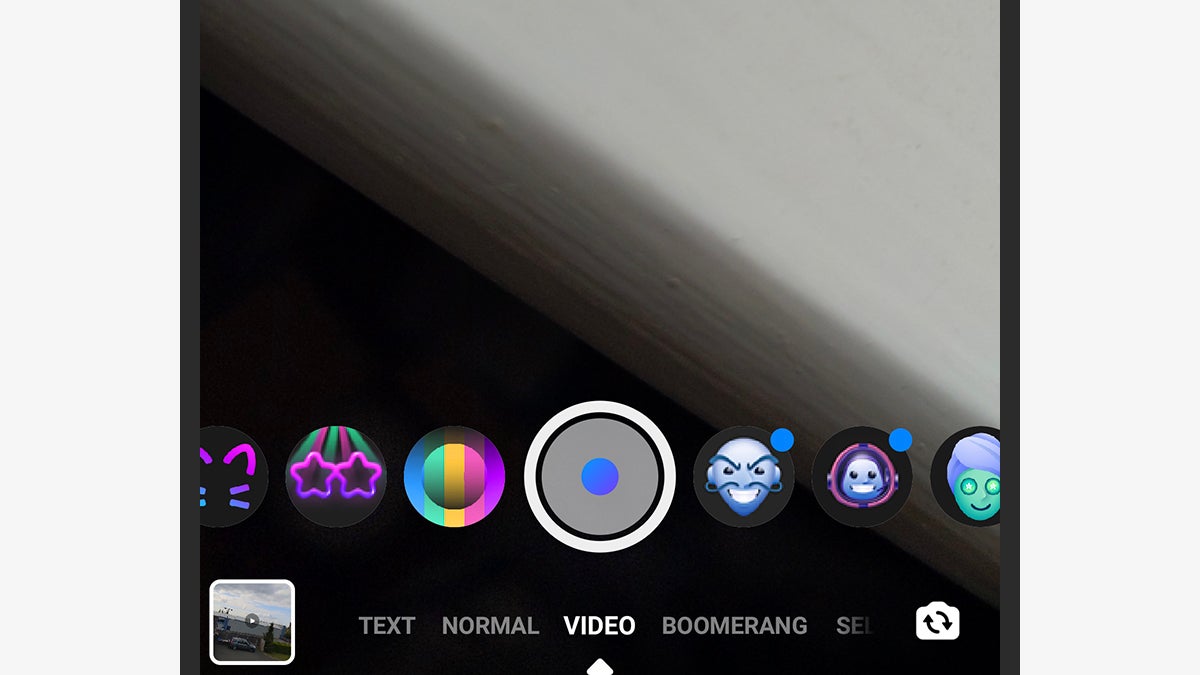 You’ll be presented with an overwhelming number of filters, effects, and options while you’re recording the video and afterwards, so you can really dress your clip up if you want to. There’s also an edit feature so you can trim down the start and the end of the video.

The Microphone button is just to the right of the Camera, ready to record a spoken message for one or several people. Tap and hold the button to start the recording, then let go to send your message, or drag upwards to cancel and start again.

One of the reasons you might choose Duo over any other video-calling app is its simplicity, and recording messages for other people to watch at their leisure is just as easy. To get started, you can just swipe down from the screen that appears when you open the app. 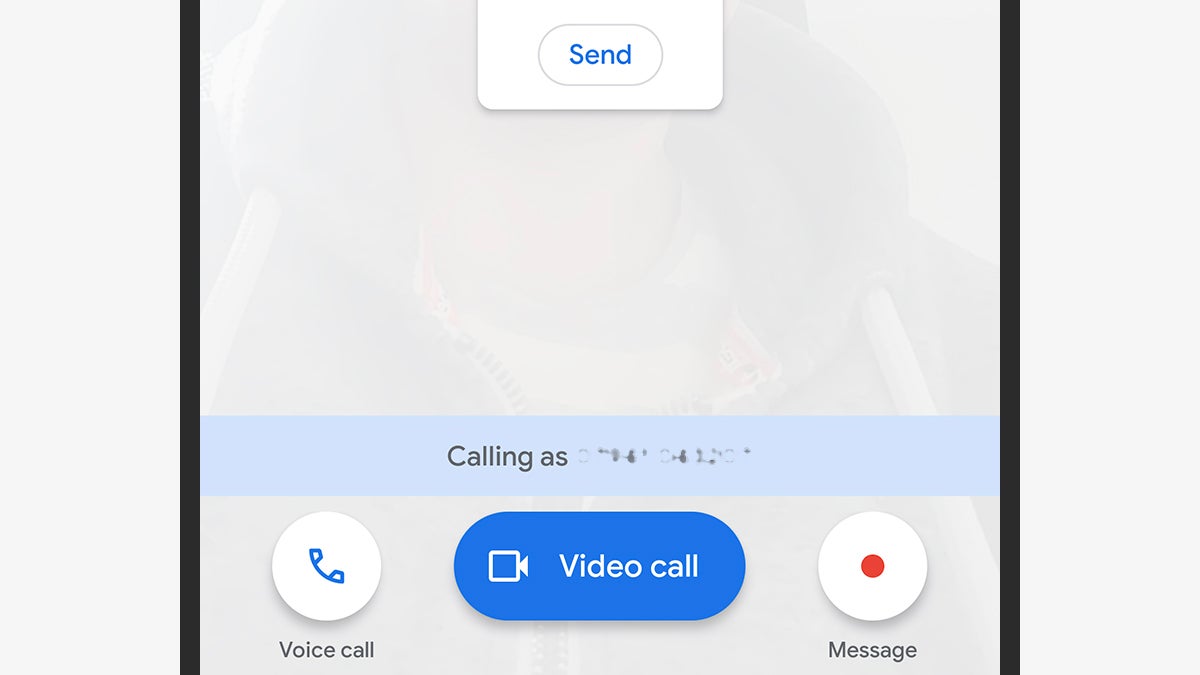 Duo lets you leave a message if you don’t want to make a call. (Screenshot: Gizmodo)

You’ll immediately see an option to Re-record your message if something’s gone terribly wrong, or you can send it by tapping Next. With video, you have the option to add some stickers and scribbles on top of the footage before sending it.

You can get at the same options by first selecting a contact from the list in Duo, and then tapping Message. Duo certainly doesn’t have as many options as some of the other apps here, but its ease of use counts in its favour – if your friends and family use it, of course.

You can’t use FaceTime to send a prerecorded message to a friend or family member – it’s face-to-face time only – but you can use iMessage through the Messages app on your iPhone instead, as long as the person you’re sending a video to is also an iPhone user.

Open up a conversation (or tap the Compose button at the top of the list to search for someone), then tap the Camera button (lower left). The standard iPhone camera interface appears, and you can tap Video to start recording a message to add to the chat thread. 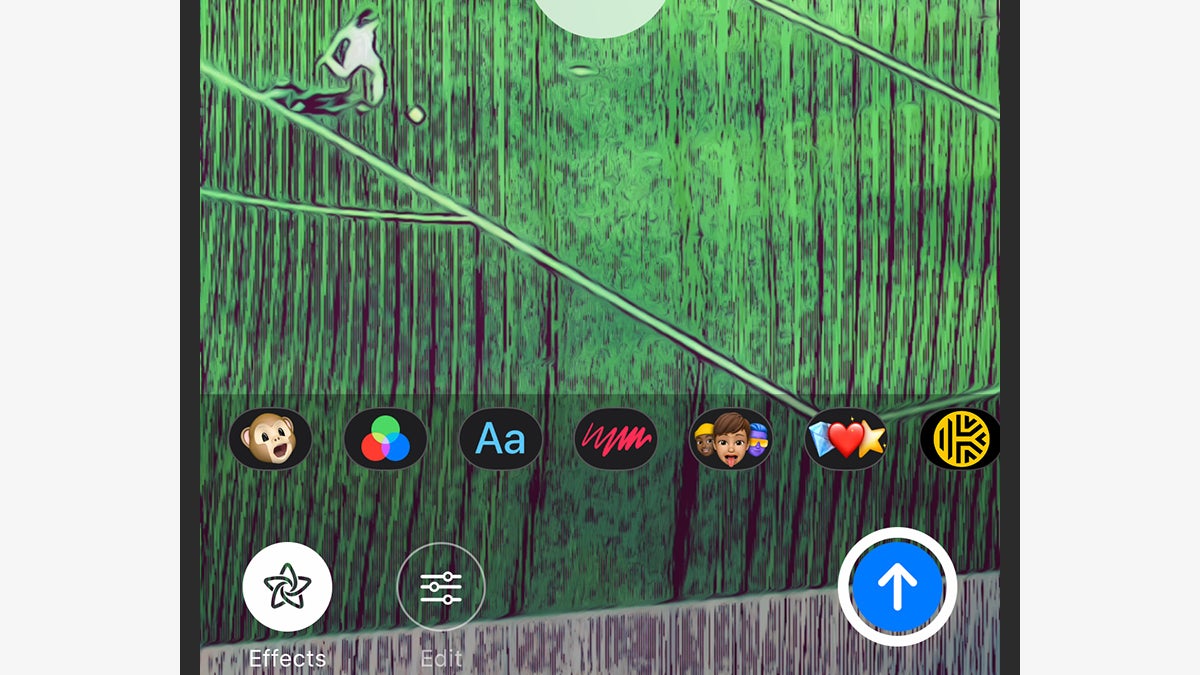 iMessage comes with plenty of video filters to try out. (Screenshot: Gizmodo)

Apple offers more effects and edit options than you might expect: You can drop in Animojis and Memojis, trim the start and the end of your video, crop the frames, change the colour balance, apply special effects, add text overlays, and more before sending it.

To send audio, tap the Sound wave button down in the lower right corner of the conversation. You need to tap and hold on this to make a recording. Swipe up while still holding to send it immediately, or stop holding to preview the audio before sending.