iPadOS vs Windows vs Chrome OS: Which is the Best Tablet Experience Right Now?

If you’re choosing a new tablet, or a new tablet that can turn into a laptop if you attach a keyboard to it, then you’ve got three choices: iPadOS, Windows, or ChromeOS. One dedicated tablet OS, recently split from the iPhone, and two converted desktop OSes doing double duty on tablets. Which one is best for you?

While we can’t cover every single usage scenario here – and ultimately your choice does come down to how you’re going to use your tablet, and the apps you want to run – the three operating systems do differ in their approaches in some interesting ways. It’s worth knowing about those differences before buying.

Windows has been attempting to put forward a tablet-friendly face since 2012 and the days of Windows 8. Those early attempts were rather disastrous. In Windows 10, the join between desktop mode and tablet mode is much less obvious and jarring, and Microsoft’s operating system is all the better for it.

It’s smart-looking devices like the Surface and the flexibility of Windows and the ease with which it can now move in and out of a tablet-friendly mode that have given rise to all the 2-in-1 devices on the market – these laptop-tablet hybrids are trying to give users the best of both worlds in some respects, and though the move seemed daring to begin with, it’s paying off now. 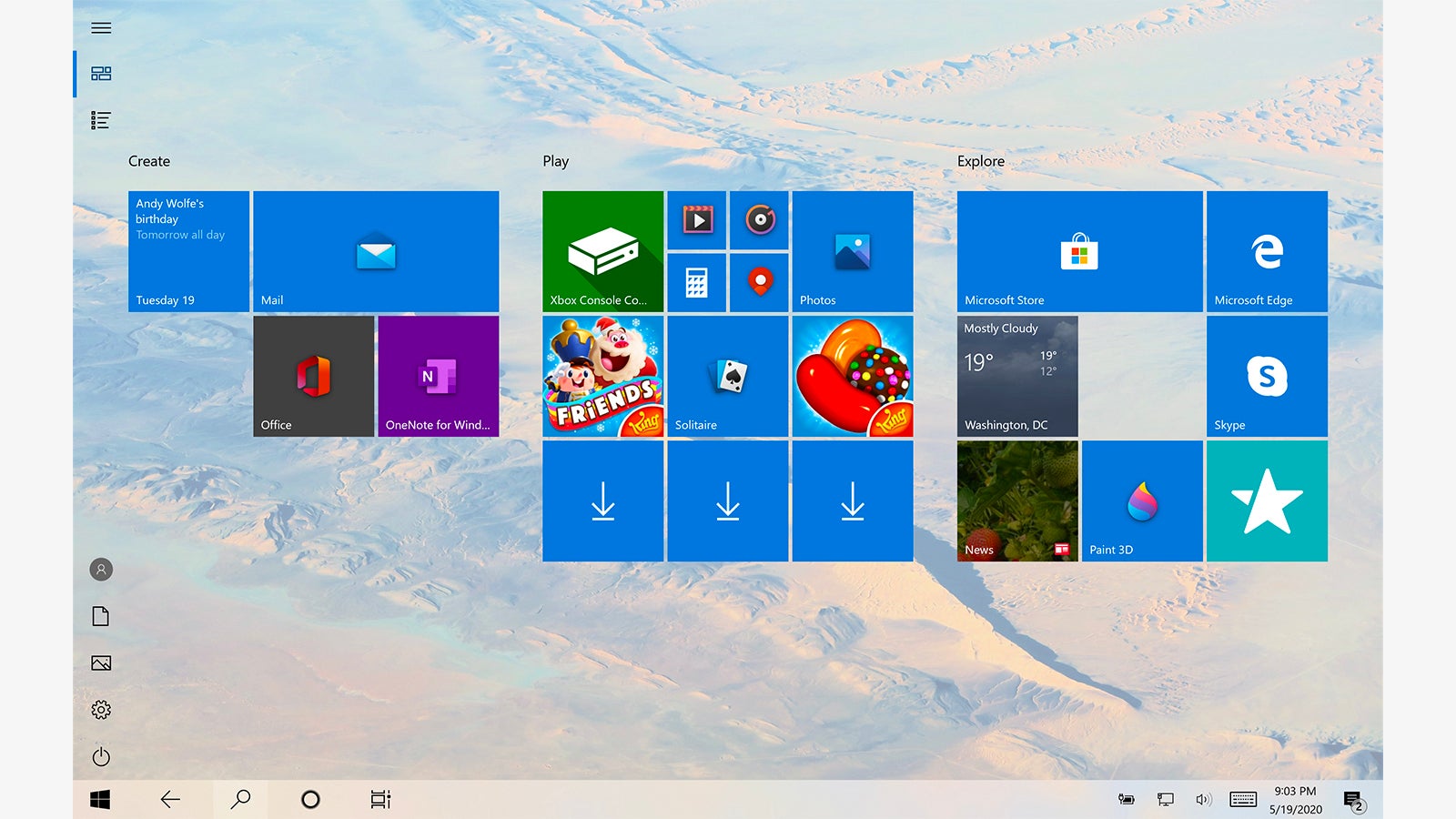 Windows should flip between tablet mode and normal mode automatically on most 2-in-1 devices (when you disconnect and connect the keyboard cover, for example). You can also jump between the modes manually by opening the Action Centre pane on the right and tapping the Tablet mode button.

The Start menu expands to fill the whole screen, the taskbar grows bigger, the touchscreen keyboard comes into play, and the usual Windows snap grid (for docking windows to the left or right) shrinks to two panels instead of four (so you can split the screen between two apps, essentially). It’s still clumsy, in places – File Explorer essentially just has bigger buttons and text – but it just about works.

When it comes to judging just how effective Windows is as a tablet OS, it really depends on the software you’re using. Microsoft’s own programs, like Office or the built-in Mail client, have obviously been designed with this alternative mode in mind, and even the Office ribbon isn’t too difficult to operate on a touchscreen. 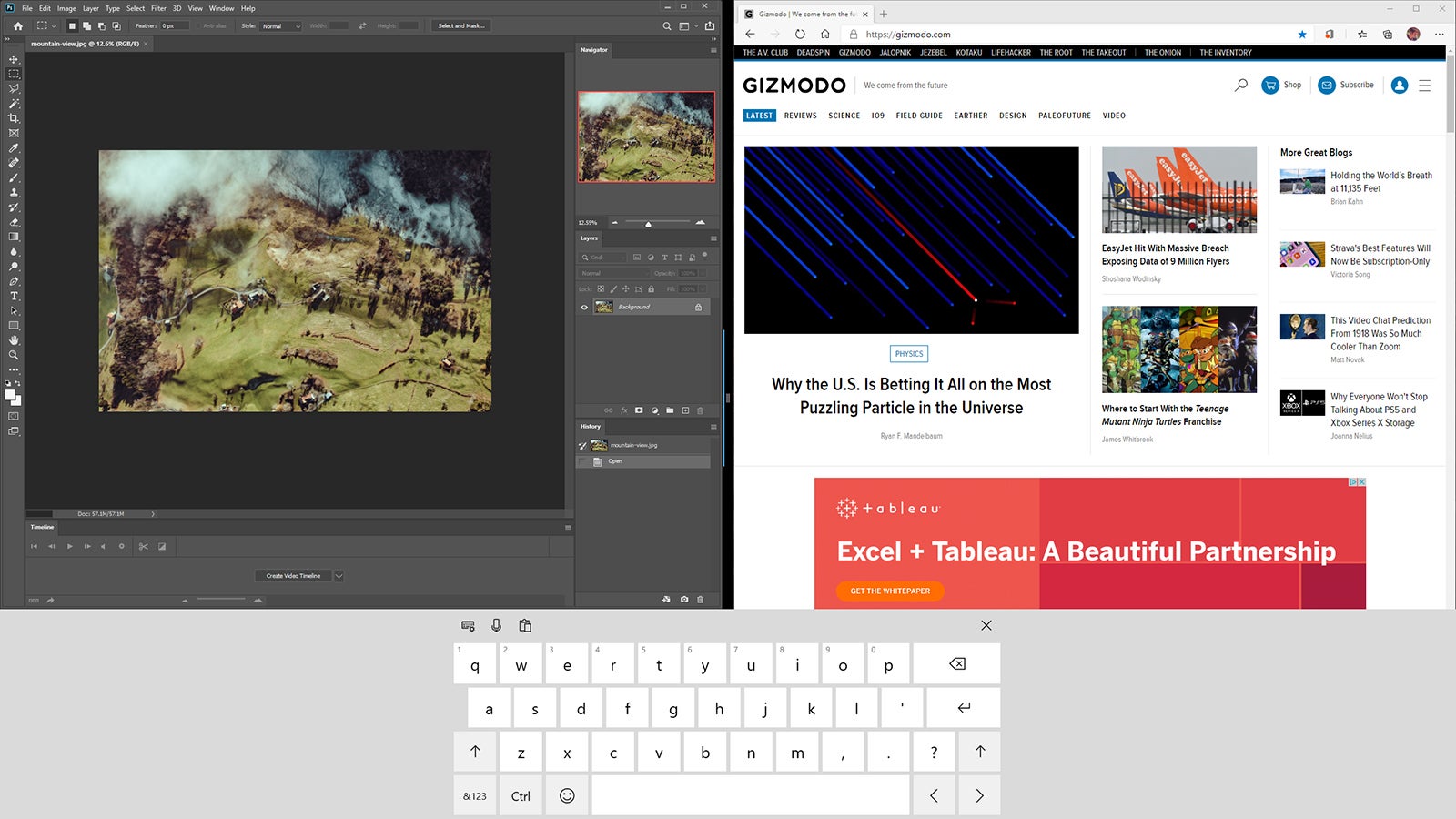 For non-Microsoft software, it’s a bit more hit and miss. Google Chrome adapts fine, with an interface that’s just slightly bigger – and it’s fantastic, by the way, to have the full desktop web available – but a more detailed and complex program like Photoshop doesn’t look comfortable in tablet mode. It works, but it’s not really designed to be operated with the stab of a finger (like, say, Photoshop for iPad is).

Windows is a desktop OS adapted for tablet use, and it still feels like it, despite all the improvements that have been made since 2012. The actual menus, keyboard, settings and other OS furniture all work fine, but they’ll work better if you plug in a mouse and keyboard. Just be aware that not all your desktop programs are going to make the jump smoothly – though you might consider that awkwardness worth it in return for being able to run desktop programs on a tablet device at all.

iPadOS has now made the break from iOS, which was probably a smart move from Apple: It means tablet-specific components like the Dock, Split View and Split Screen can be developed independently. Most recently, and perhaps most significantly, iPadOS got proper mouse and trackpad support. 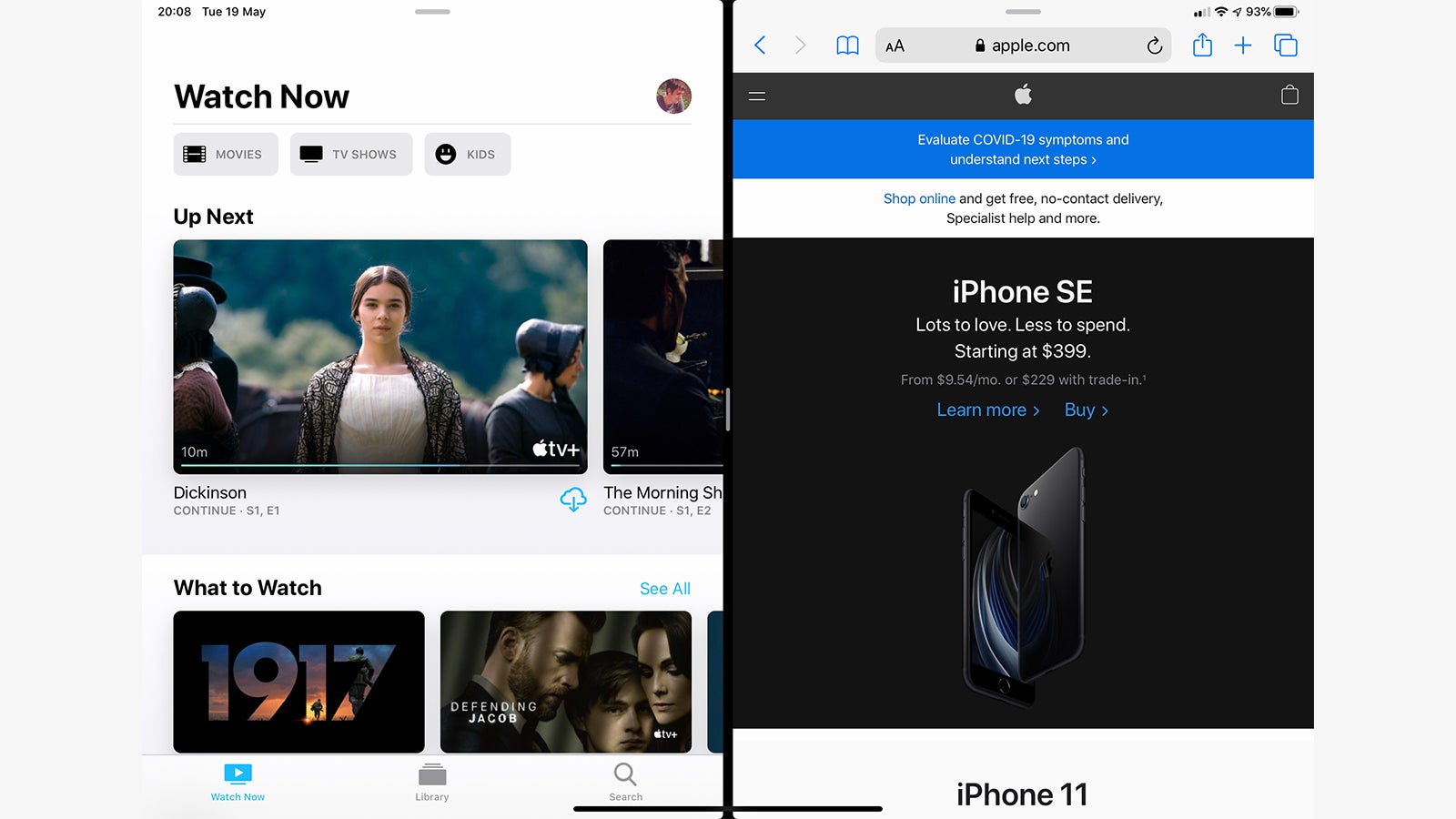 The Split Screen feature doesn’t work quite as well as the Windows equivalent, because iPadOS apps aren’t quite as comfortable working inside variably sized windows as the Microsoft OS apps are. Plus, despite Safari for iPad’s attempts to emulate a desktop browser, you’ll still come across some hiccups – to get the full power of the web on your tablet, Windows remains the better choice.

We do like a lot of the iPadOS experience though. Elements like the settings screens and native apps such as email and maps just feel more natural and comfortable than they do on Windows. These are apps built for touchscreen use of course, rather than apps built for mouse and keyboard operation that have then been adapted.

As on Windows, your experience is going to vary depending on the apps you’re using. For example, if you’re using your device purely as a tablet, then Photoshop for iPad is easier to use than Photoshop for Windows (albeit not as powerful). Even the Microsoft Office apps work better on an iPad, if you’re going to be sticking it in tablet mode for all or most of the time. 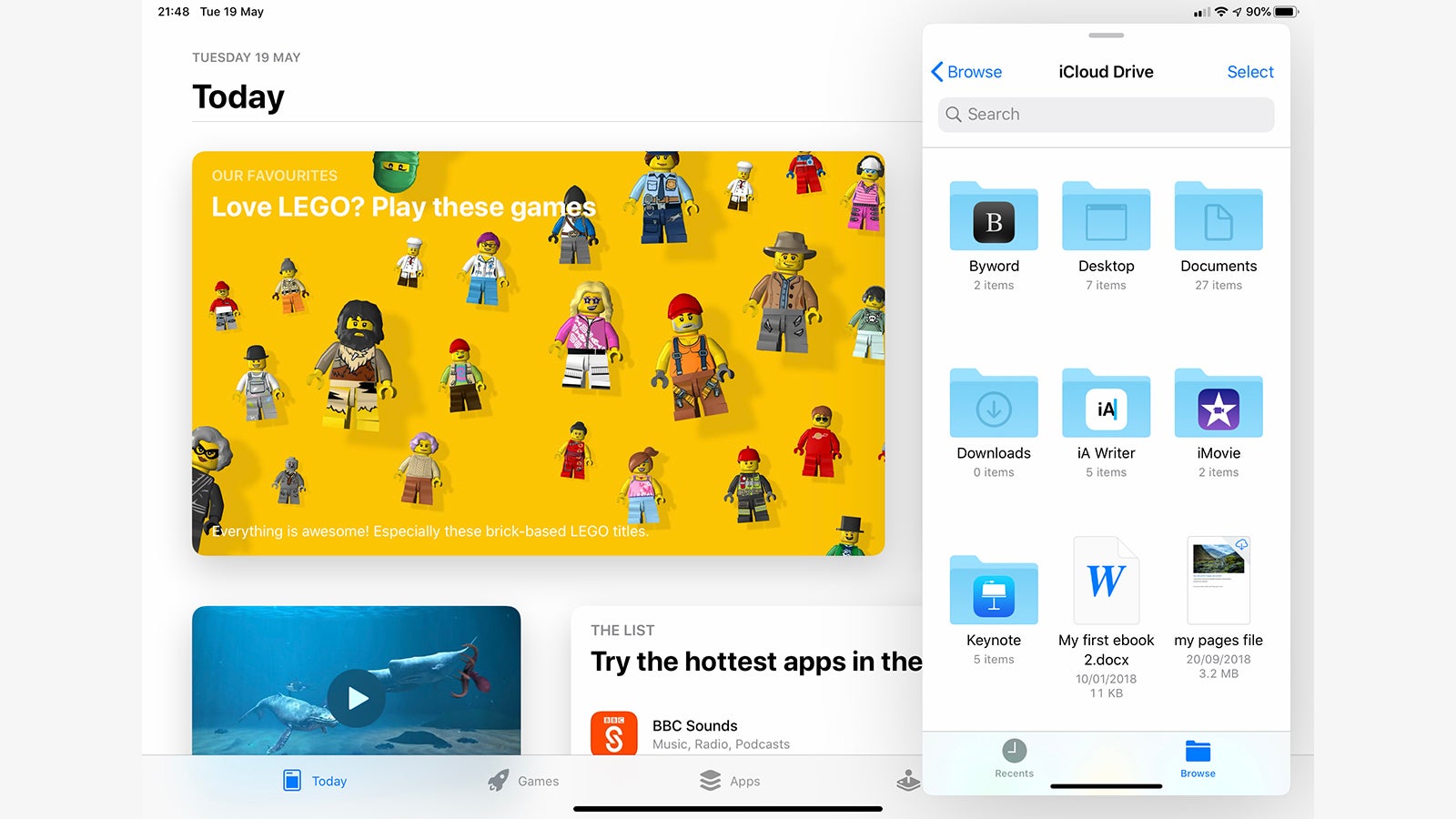 Almost everything you do on iPadOS is slick and intuitive. (Screenshot: Gizmodo)

With the likes of Netflix, Gmail, Dropbox and most other popular programs, the experience of a dedicated, long-developed iPad app usually beats out the web (or limited app) experience on Windows in tablet mode. If you really need the web interface for something, Windows usually wins out; otherwise the iPad app is going to feel more intuitive.

So what’s your use case? For a tablet that’s going to stay a tablet mode for most of the time, we prefer iPadOS, and the home screen plus dock plus widgets is a better starting interface than Windows’ expanded Start menu. On the other hand, Windows and its programs do a better job of switching between a tablet and a desktop OS, because it still treats them as distinct modes. The question is how many of your apps you want to use in mobile form, and how many you want to use in desktop or desktop web form.

Chrome OS is much less concerned with the tablet form factor than either Windows or iPadOS, but considering a lot of Chromebooks are 2-in-1s, it’s worth covering as well. Switch to tablet mode on a Chromebook, or buy Chrome OS on a tablet, and the interface changes just slightly – you get a home screen covered in app icons, while a new app switcher button appears in the lower right.

Basically, it equates to trying to use the Chrome browser with just your fingertips, which isn’t as bad as you might expect (unless you need to do a serious amount of word processing, but that’s a pain on any tablet OS). Obviously some sites are better geared towards this than others, but we didn’t find it much of a problem – most Chromebooks have relatively low-resolution screens, which helps. 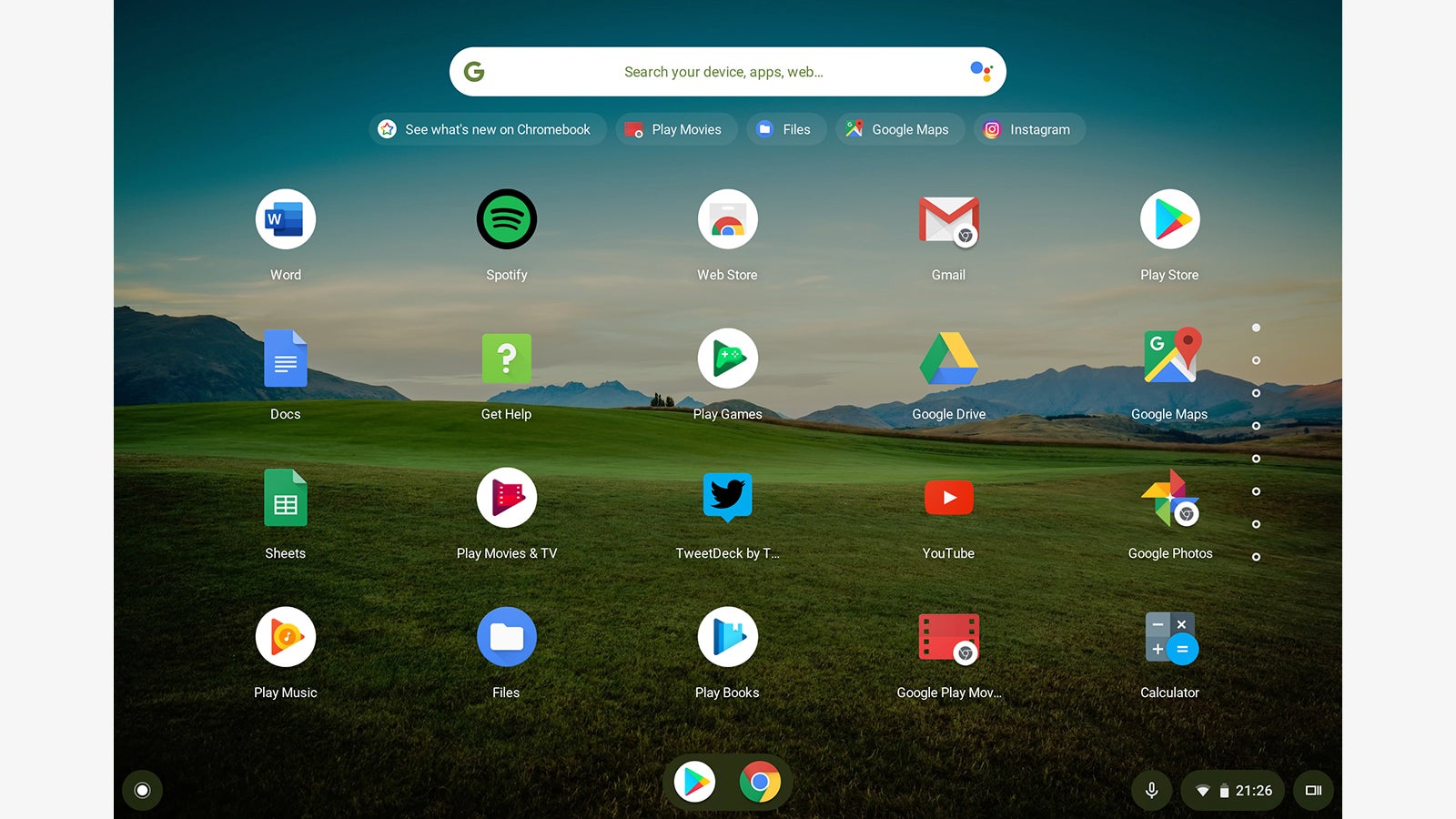 Using Gmail on the web is fine, for example, though perhaps not as smooth as using the Gmail app on iPadOS. Again, your mileage is going to vary depending on your apps of choice and whether you need a full-fledged web browser for whatever you’re trying to do on your tablet.

The support for Android apps that now comes baked into Chrome OS helps here too: You’ve essentially got a device that’s both a Chrome OS tablet and an Android tablet. Android tablet apps have never been great, but the staples like Netflix and Spotify and Plex work just fine, as do the Office apps from Microsoft. If you don’t want to use the Android apps, switch to the web apps instead.

And really that’s the one area where Chrome OS shines as a tablet OS – in getting you access to full web apps. If this is where you’re going to be spending most of your tablet time, then you might prefer Chrome OS to the bloat of Windows or to the complications that Safari on iPadOS occasionally throws up on the web. 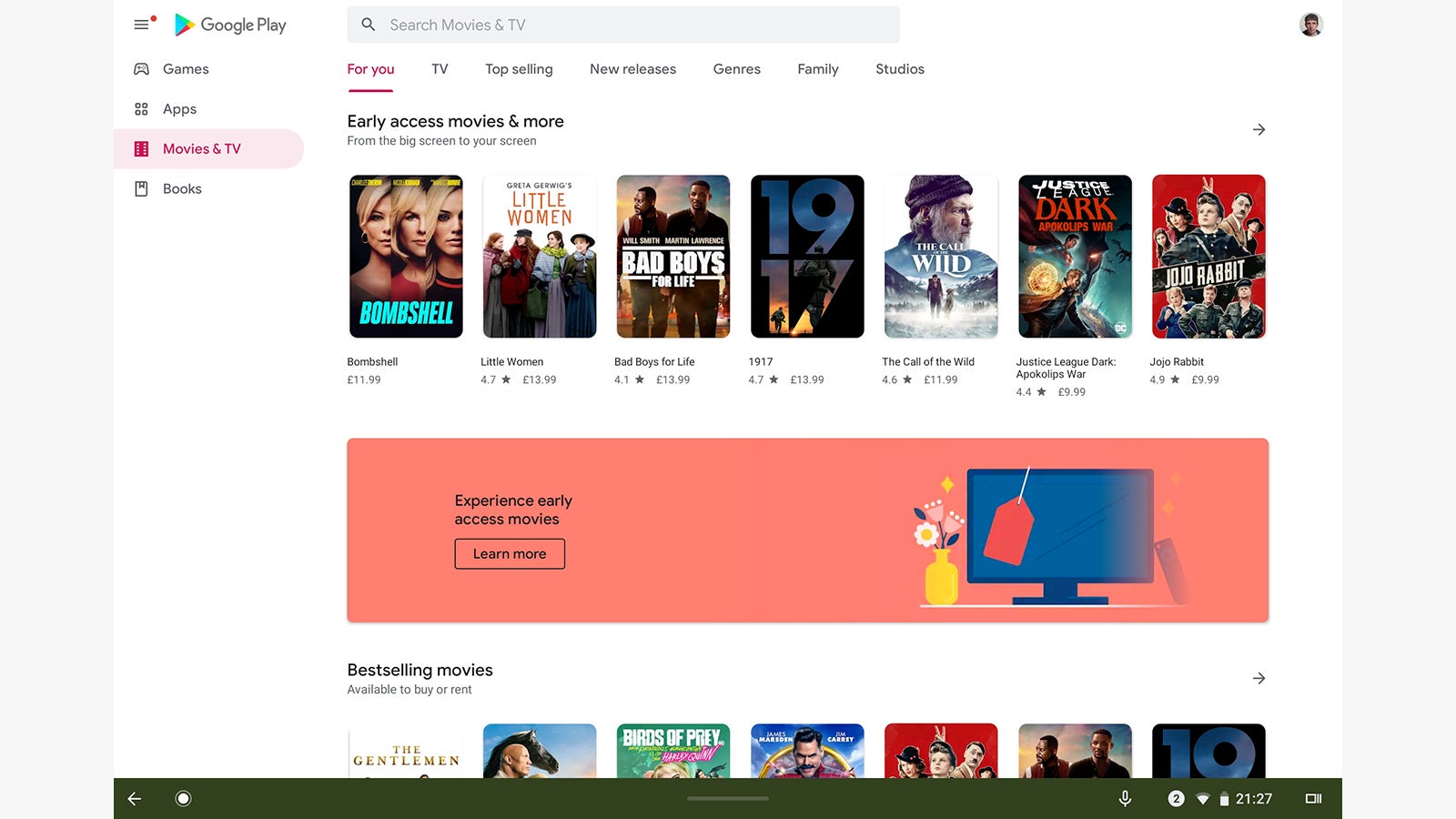 Chrome OS definitely doesn’t have the polish of iPadOS or Windows when it comes to switching between apps, or getting two apps side-by-side on screen, or using the on-screen keyboard – the keyboard can’t be undocked and moved around like it can on Apple and Microsoft devices, for example.

There’s one other point worth mentioning though, and that’s Google Assistant: This is easier to access on a tablet running Chrome OS than it is on a Windows tablet or an iPad. If you live a lot of your life through the Assistant or in web apps, then a Chrome OS tablet – or at least a 2-in-1 – might not be such a bad idea after all.