Jupiter Looks Like a Fireball in This ‘Lucky’ Infrared Image

Hard to believe, but this stunning infrared image of Jupiter was taken from Earth’s surface, specifically from the Gemini North Telescope in Hawaii. Combined with other observational data, the new image is casting revealing more about the gas giant’s epic storms and an odd feature seen in its Great Red Spot.

New research published in the Astrophysical Journal analyses three years’ worth of Jupiter data gathered by three very different sources: the Gemini North Telescope on Hawaii’s Maunakea, the Hubble Space Telescope, and NASA’s Juno spacecraft, which is current in orbit around the gas giant. A crowning achievement of this new study, led by astronomer Michael Wong from UC Berkeley, is an exceptionally detailed image of Jupiter, showing the planet in infrared.

“These images rival the view from space."

A technique called “lucky imaging” was employed to build this mosaic view. After taking hundreds of short-exposure images of a target area, astronomers keep images taken during times of atmospheric stability and toss the others onto the rubbish heap. Only the best images are used to create a mosaic of the entire planet, resulting in a super-crisp, high-definition view of Jupiter, as seen from Earth’s surface.

“These images rival the view from space,” said Wong in a press release. 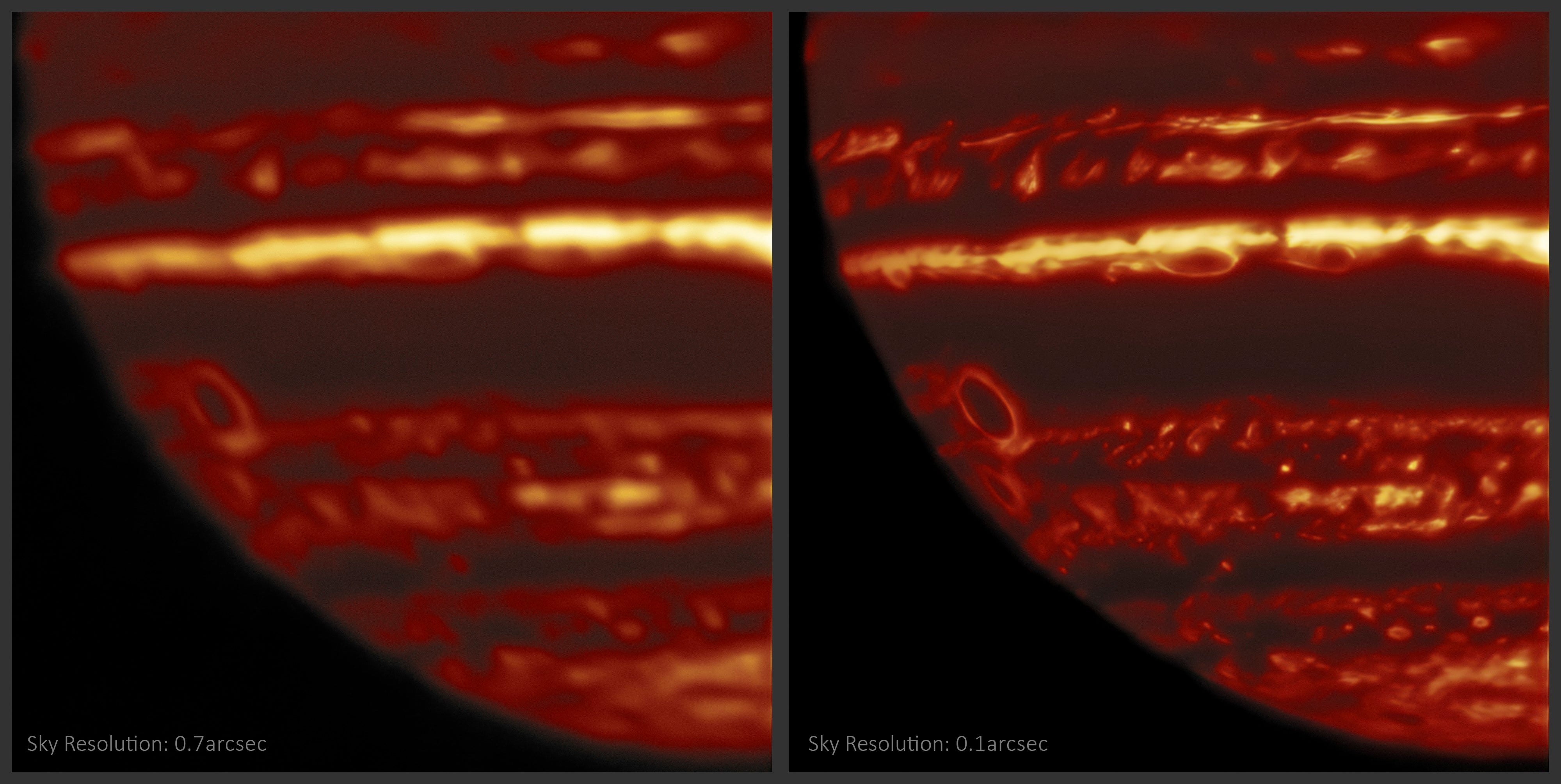 Gemini visualised Jupiter at resolutions reaching 500 kilometres (300 miles), on a planet measuring 139,820 kilometres (86,880 miles) wide and an average distance of 778 million kilometres from Earth (484 million miles). At this resolution, “the telescope could resolve the two headlights of a car in Miami, seen from New York City”, said Andrew Stephens, a Gemini astronomer and a co-author of the study, in the press release.

Jupiter’s roiling interior produces heat that seeps through to its upper atmosphere, which the Gemini telescope can detect using its Near-Infrared Imager. But Jupiter’s cloud layers are unevenly thick, resulting in the jack-o-lantern effect. Looking at the image, you can instantly see where the clouds are thickest – the dark parts – and where they’re thinner and hazier – the bright parts. 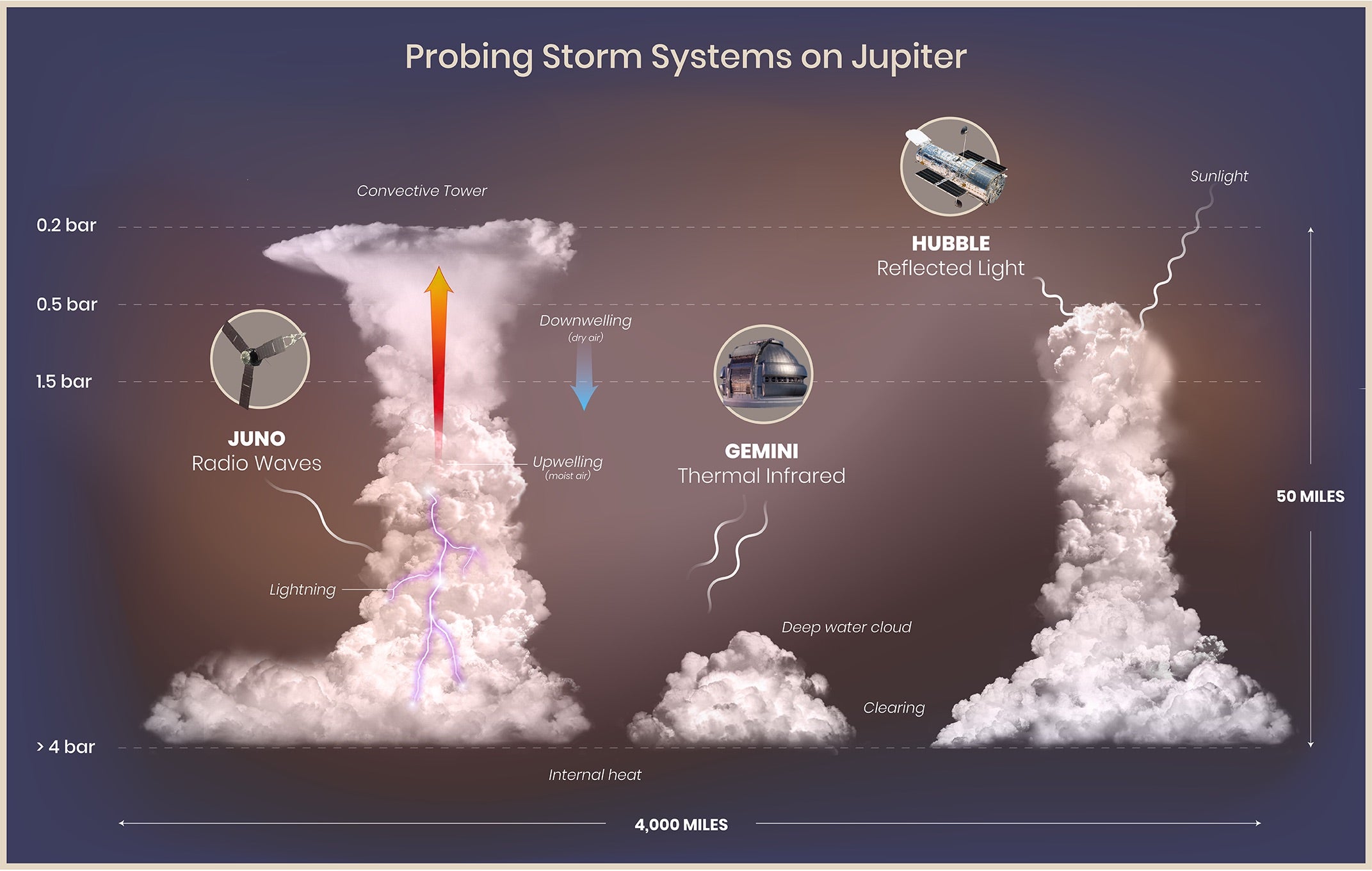 Illustration depicting storm formation on Jupiter, and the instruments that contributed to this finding. Image: NASA, ESA, M.H. Wong (UC Berkeley), and A. James and M.W. Carruthers (STScI)

With the addition of Hubble data, the researchers acquired multi-wavelength views of Jupiter in both infrared and ultraviolet, and Juno endowed them with the power to detect the planet’s radio emissions. This let the team study atmospheric effects such as wind patterns, atmospheric waves and cyclonic storms, the latter of which can last for years and even centuries.

Juno recorded occasional radio spikes caused by lightning flashes in the Jovian atmosphere. The researchers managed to pinpoint the location of these lightning flashes and match them with concurrent observations made by Gemini and Hubble. This led to the discovery that lightning and the big storms that produce it form in the vicinity of gigantic convective cells, which loom above deeper clouds made up of water and other liquid. 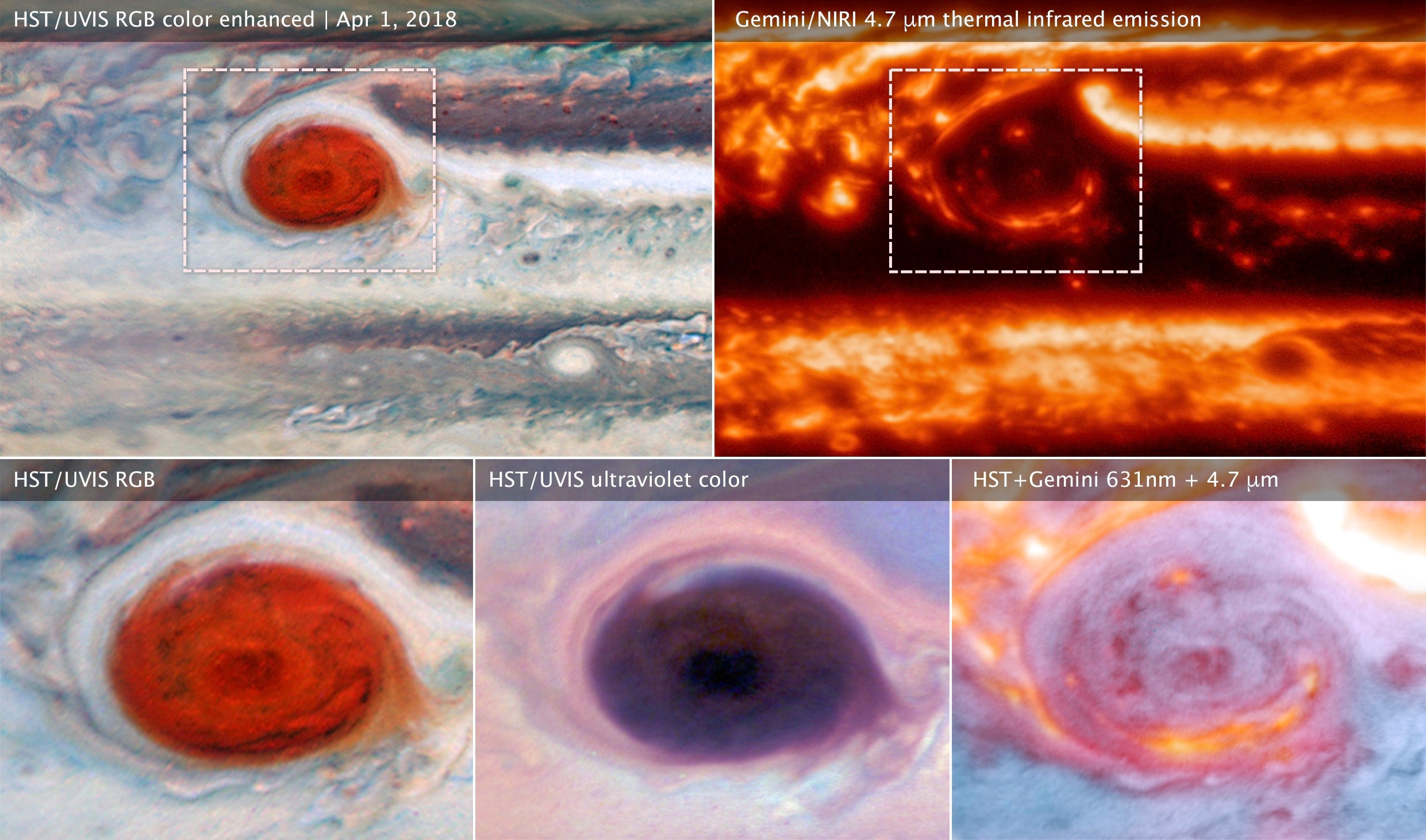 These observations also helped to solve a mystery about certain shapes within Jupiter’s Great Red Spot. Turns out these blotches aren’t strangely coloured areas within the swirling vortex itself but rather holes in the cloud cover, as revealed by Gemini’s hi-res infrared views.

A single instrument can’t be expected to do it all, but when you combine these powerful tools, some pretty amazing things can happen.