Here’s our roundup of the latest developments and research into covid-19, including more insight into its deadly effects on the body, how ready the world's most infected country is for reopening, and a massively disappointing result for two potential treatments that were once hailed as “game-changers” by US President Donald Trump.

A study published today in the Lancet is the latest – and by far the largest – to examine whether the drugs hydroxychloroquine and chloroquine can provide any benefit to covid-19 patients. The researchers analysed the medical records of over 96,000 covid-19 patients across 671 hospitals on six continents. They compared 14,000 patients who had been given hydroxychloroquine or chloroquine, either alone or with an antibiotic, to a control group not given those drugs.

Those who took any combination of hydroxychloroquine or chloroquine weren’t any more likely to survive than people in the control group; in fact, they actually had a greater risk of dying and higher odds of developing a specific type of irregular heartbeat. The pattern was seen after adjusting for other factors like the age of the patients, their underlying health problems, and the baseline severity of their illness upon hospital admission.

“We were unable to confirm a benefit of hydroxychloroquine or chloroquine, when used alone or with a macrolide [an antibiotic], on in-hospital outcomes for COVID-19,” the authors wrote.

The study has its limitations, primarily because it’s observational, rather than a carefully controlled and randomised trial. But its large sample size dwarfs that of any other study of these drugs to date, including those that have found a potential benefit. As the authors note, it’s the most extensive real-world analysis of the drugs so far reported.

There are still randomised trials of hydroxychloroquine underway, but it’s becoming more and more unlikely that either drug will turn out to help the people most in need of life-saving treatment. Instead, they could very well further endanger a patient’s health.

The grisly damage wrought by covid-19

Most people who contract covid-19 will survive, but a new study in JAMA this week highlights the gruesome bodily harm it causes in those who die of it. Researchers in Germany published their findings from the autopsies of 10 covid-19 patients who died in April. 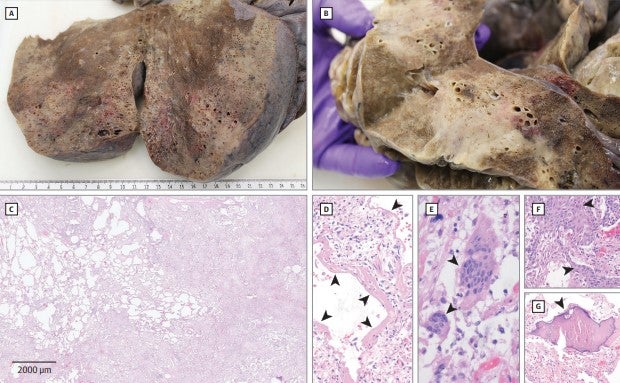 The lungs of someone who died from covid-19, with the images from the bottom taken under a microscope. (Image: Schaller, Tina; Hirschbühl, Klaus, et al/JAMA)

In all the cases, the virus had caused extensive damage to the lungs, leading to a condition known as acute respiratory distress syndrome, or ARDS. The lungs of people with ARDS fill up with fluid, which then effectively drowns them, depriving them of oxygen. One patient’s lungs had become so scarred that practically all lung tissue involved in processing oxygen and carbon dioxide had been destroyed.

Some patients also seemed to develop secondary infections or aspiration, which is when someone inhales a foreign object or fluid down their windpipe. A few had evidence of heart inflammation, but it wasn’t clear whether this inflammation was part of the immune system’s response to infection or something directly caused by the virus, as other research has suggested. They found no evidence in these patients that the virus had migrated to the central nervous system, as some scientists speculate that it can.

Some people who survive the infection are expected to suffer long-term complications, such as breathing problems, loss of their sense of smell, and other organ damage. And it’ll take years to understand all the ways that covid-19 can harm us.

A marker for reopening

This week, Johns Hopkins University, which has been running a tracker of covid-19 cases and deaths since nearly the beginning of its global spread, unveiled another handy tool.

The World Health Organization has recommended that countries should only start considering lifting restrictions on distancing and businesses once the rate of positive covid-19 results from daily testing has dropped below 5 per cent for at least two weeks. That threshold likely indicates that countries have a widespread testing system in place and are managing the outbreak with enough resources, like hospital beds, to spare.

Johns Hopkins researchers applied that same criteria to all 50 US states as well as Puerto Rico and Washington DC.

As of today, according to their data, 29 regions in the US – the country with the most cases of and deaths from coronavirus – have yet to reach the reopening point. These include Maryland, Virginia, D.C., and Colorado, which all have a seven-day rolling average of positive tests above 10 per cent. Puerto Rico has a rolling seven-day average of 100 per cent positive tests, though that may more signal the lack of available testing data from the territory. The states with the lowest positive rates include Hawaii, Alaska, Montana, and Vermont, all below 1 per cent. New York State, which has sustained the largest reported number of cases and deaths in the US, is hovering just over 5 per cent, a reflection of its improving situation (at its peak, nearly 50 per cent of daily tests were positive).

Positive test rates aren’t the only indicator of a state’s safety to reopen – other important metrics include trends in hospitalisations and reported deaths, as well as the raw number of cases. Recently, there have been concerns that several American states have been muddling their numbers by including two different types of testing in their tally. But even under the simplest measure, it seems that much of the US is still unprepared for reopening.