Looming Landslide in Alaska Could Trigger Enormous Tsunami at Any Moment, Scientists Warn

The collapse of an unstable mountain slope in the US state of Alaska could trigger a catastrophic tsunami in Harriman Fjord. A retreating glacier is producing this precarious situation, highlighting yet another type of hazard caused by climate change.

An open letter signed by 14 experts in landslides, tsunamis, and climate change describes an unstable mountain slope above the leading edge of the retreating Barry Glacier in Alaska. Frighteningly, this pending landslide could spawn an enormous tsunami in Harriman Fjord, which is located some 60 miles (100 kilometres) from Anchorage. Rolling through Prince William Sound, this massive wall of water would threaten “potentially hundreds of people at one time,” as the region is popular among tourists, fishers, and hunters, according to the letter, co-authored by Steve Masterman, director of the Division of Geological and Geophysical Surveys.

The slope is currently creeping very slowly, but it could turn into a fast-moving landslide at virtually any moment. Factors that could trigger a catastrophic collapse include earthquakes, significant rainfall, and lots of snow. The ongoing retreat of Barry Glacier could also contribute to the timing of the imminent collapse. 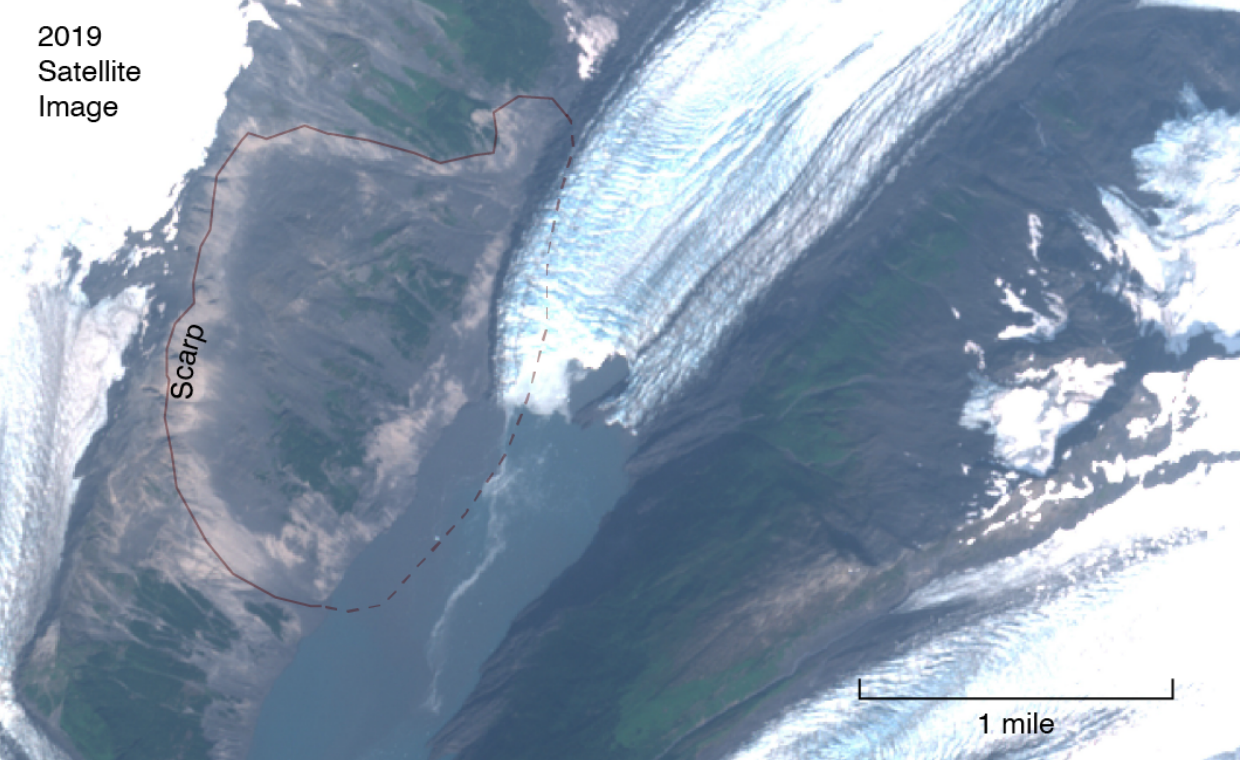 The slow-moving landslide along Barry Arm, as seen by the band of terrain known as a scarp. (Image: DGGS)

Predicting precisely when this unstable slope might fail is not easy, but the scientists said this “landslide-generated tsunami will happen within the next year, and likely within 20 years.” Importantly, large landslides are commonly “preceded by rockfalls and other signs of increasing instability,” wrote the authors.

The group’s findings are still preliminary and in need of peer review, but their computer models paint a grim picture, as the authors explain in their letter:

“The effects would be especially severe near where the landslide enters the water at the head of Barry Arm. Additionally, areas of shallow water, or low-lying land near the shore, would be in danger even further from the source. A minor failure may not produce significant impacts beyond the inner parts of the fiord, while a complete failure could be destructive throughout Barry Arm, Harriman Fiord, and parts of Port Wells. Our initial results show complex impacts further from the landslide than Barry Arm, with over 30 foot waves [9 metres] in some distant bays, including Whittier. Field measurements and further analysis could allow us to make these estimates more accurate and specific.”

Climate change could be what’s making matters worse. The northern part of the world, including Alaska, is heating, up twice as fast as elsewhere and causing glaciers to melt away. The walls of valleys lose their support when glaciers retreat, creating situations in which rockfalls and landslides can generate tsunamis, provided a body of water exists at the zone of accumulation.

These types of events could become more common in a warming world. Anna Liljedahl, a scientist at Woods Hole Research Center in the US state of Massachusetts, said in a press release that it’s not just Alaska but “places like British Columbia and Norway” that could face similar issues as ice melts in precarious ways.

“This deforming area of rock has been active for several years, but it is in a remote location,” Dave Petley, a geologist at the University of Sheffield, told Gizmodo. “Thus, it has not been identified previously. The change is that it has been identified, and of course using archive satellite imagery we can now go back to see how it has developed over time. The interesting aspect of this landslide is that it is located at the very snout of a glacier that is retreating. We know that retreating glaciers can cause adjacent slopes to destabilise, a process that we call debuttressing. Worldwide glaciers are retreating in response to climate change, so we are seeing more of these large rock slope failures develop.” 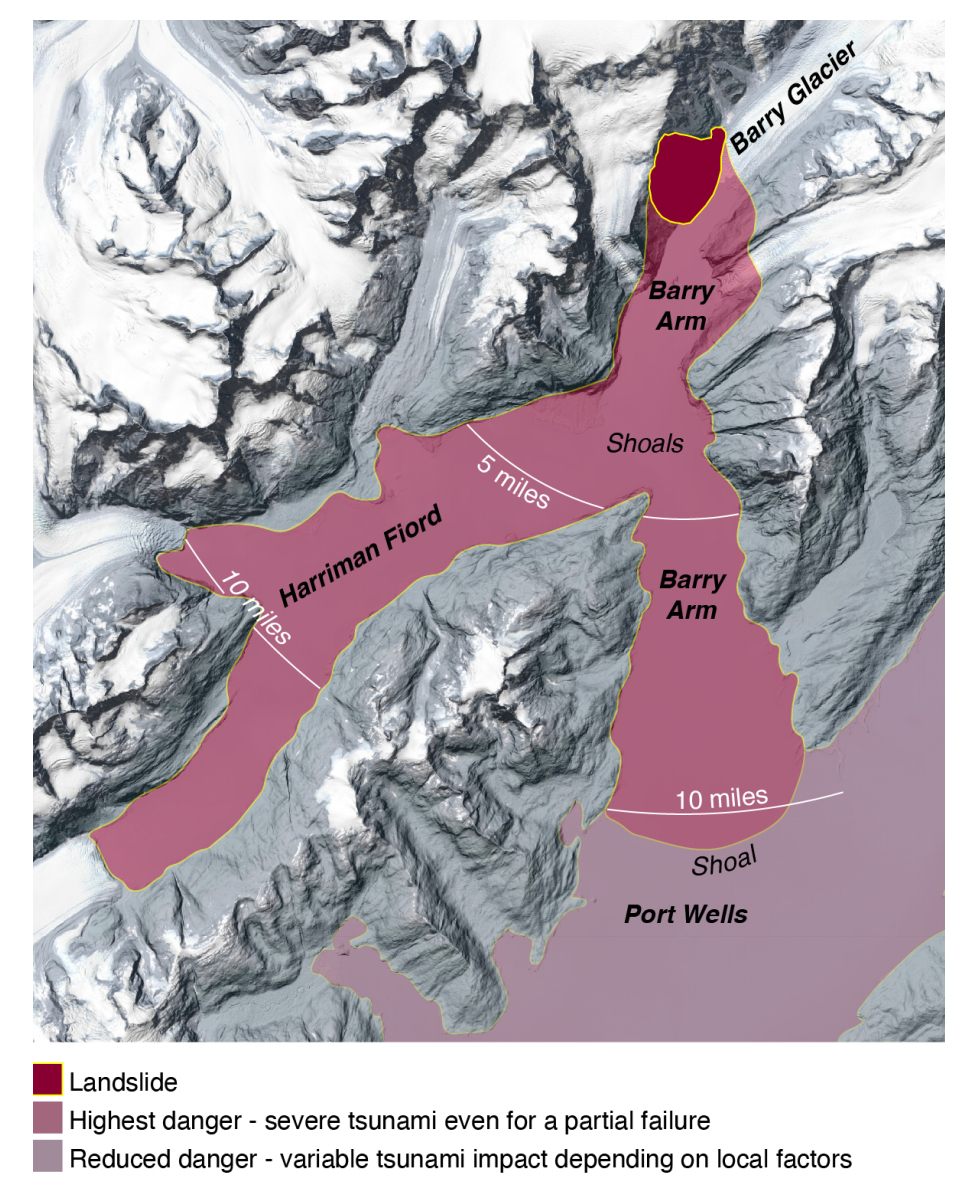 The risk from tsunamis is very high in Barry Arm and Harriman Fjord, as this model of the pending tsunami suggests. (Image: DGGS)

Alaska is no stranger to landslide-induced tsunamis. On 9 July 1958, an earthquake triggered a landslide in Lituya Bay, releasing an estimated 40 million cubic yards (30 million cubic metres) of material. The ensuing splash reached more than 1,700 feet (530 metres) in height. A gigantic wave then rolled through the fjord, knocking over trees and killing five people.

More recently, a 2015 landslide near Alaska’s Taan Glacier produced a 633-foot (193 metre) wave in Taan Fjord that smashed into the opposite wall of the glacial valley. And in 2017, a landslide in Greenland produced a tsunami that roared into a small, isolated community.

The looming tsunami in Harriman Fjord, however, would dwarf these previous examples. The scientists estimate a potential volume of collapsing material could be as high as 500 million cubic metres, and with a potential energy roughly 10 times greater than any of the previous events in Alaska. As the New York Times reported, this amount of material is “several hundred times the volume of the Hoover Dam.”

“This is an enormous slope – the mass that could fail weighs over a billion tonnes,” said Petley. “The internal structure of that rock mass, which will determine whether it collapses, is very complex. At the moment we don’t know enough about it to be able to forecast its future behaviour.”

In terms of what research needs to happen next, Petley said the slope should be monitored, such as with GPS stations, which could signal a pending collapse. He said geologists should conduct a more detailed investigation to understand the rock slope better, and a plan be put into place for managing the risks should the avalanche start to accelerate.

“The State of Alaska has identified danger areas and is advising that people stay away from them until the hazard has been assessed better,” said Petley. “This is good advice.”