On Wednesday, NASA and SpaceX will launch two astronauts into orbit on a Crew Dragon spacecraft in what’s the most anticipated launch of the year.

When the Space Shuttle Atlantis took off from Kennedy Space Center on 8 July 2011, few of us would have imagined that the next crewed launch from US soil wouldn’t happen for another nine years (unless you count the launch of Virgin Galactic’s VSS Unity space plane in 2018). But here we are, as the space agency, with help from SpaceX, is busily preparing for the launch of a crewed Crew Dragon spacecraft.

NASA astronauts Robert Behnken and Douglas Hurley are scheduled to launch at 4:33 pm local time (9:33 pm BST) on Wednesday, 27 May, from Kennedy Space Center in the US state of Florida. Should all go according to plan, the two will arrive at the International Space Station some 24 hours later. The Crew Dragon spacecraft will be delivered to low Earth orbit by a SpaceX Falcon 9 rocket.

They're preparing to launch aboard a @SpaceX Crew Dragon spacecraft and fly to the @Space_Station. Liftoff is slated for May 27 at 4:33 pm ET: https://t.co/HoG4JhRE2O pic.twitter.com/2HUrGJTKsx

The Demo-2 launch, should it proceed as planned, will mark a major step forward for NASA’s Commercial Crew program. The US is currently having to rely on Russian Soyuz spacecraft to transport NASA astronauts to the ISS – and at the unfathomable cost of $86 million (£71 million) per seat. In 2016, NASA tapped SpaceX and Boeing to develop crew-friendly orbital capsules, with SpaceX’s Crew Dragon being the first to cross the finish line. Boeing’s CST-100 Starliner system is almost ready, but a glitchy uncrewed test late last year set the program back.

Behnken and Hurley are veterans of the Space Shuttle Program, and both have extensive test pilot and flight experience. The astronauts have been in quarantine since 13 May, and with extra precautions given the ongoing covid-19 pandemic.

The Demo-2 mission passed an important Flight Readiness Review on Friday 22 May, with NASA giving its approval for the scheduled liftoff. A successful static fire test of the Falcon 9’s nine Merlin first-stage engines was also conducted on Friday. Behnken and Hurley performed a dress rehearsal this past weekend, in which they adorned their fancy new SpaceX spacesuits. A Tesla Model X with NASA livery transported the pair to Launch Complex 39A, where they tested the communications system and ran through the go/no-go protocols among other final preparations. Today, NASA will be conducting its final Launch Readiness Review. 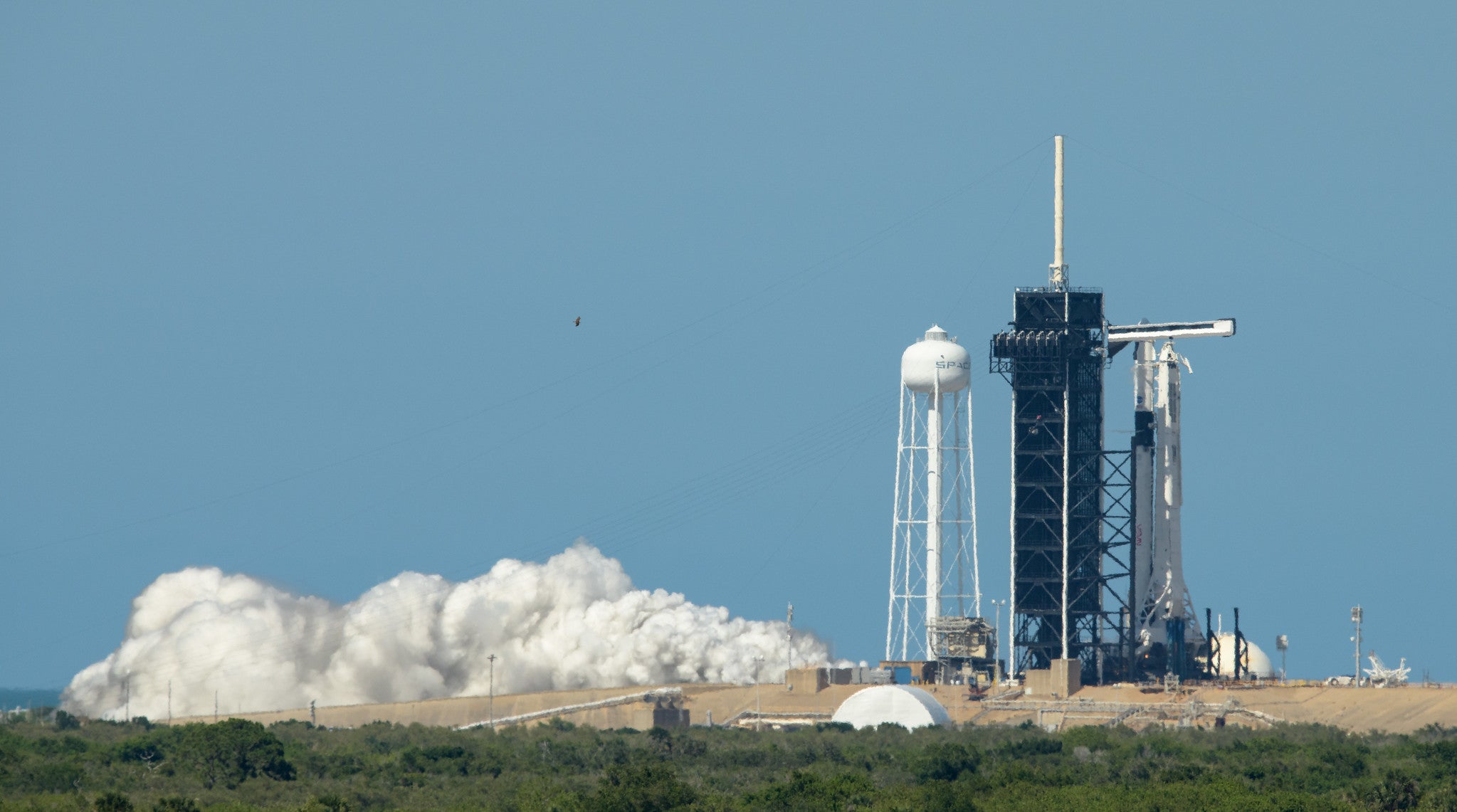 A static fire test of the SpaceX Falcon 9 rocket, performed on 22 May. (Image: NASA)

Reports are circulating that US President Donald Trump will attend Wednesday’s launch, highlighting both the symbolic and practical importance of the Demo-2 mission. But while Trump might be in attendance, the general public will not; for the first time ever, NASA won’t allow public access to the space centre, in a measure prompted by the covid-19 pandemic.

During the mission, Behnken and Hurley will test critical components of the Crew Dragon, such as its artificial environment, displays, control system, manoeuvring thrusters, and so on. The rendezvous with the ISS will be performed autonomously, but the astronauts can take manual control in the event that things don’t look right. Once aboard the ISS, Behnken and Hurley will join NASA astronaut Chris Cassidy and cosmonauts Anatoly Ivanishin and Ivan Vagner. The duo will then continue to test the Crew Dragon, in addition to scheduled tasks and research responsibilities aboard the ISS.

Demo-2 is an end-to-end mission, but no return date has been set for the Crew Dragon. This capsule is currently fitted such that it can stay in orbit for 110 days. Eventually, Crew Dragons will be capable of staying in space for 210 days, per a NASA requirement. During the return, the astronauts will re-enter the Crew Dragon, perform an atmospheric re-entry, and splash down in the Atlantic Ocean.

NASA and SpaceX will then review the mission, as the Commercial Crew program commences towards the ultimate goal of having the spacecraft certified for long-duration missions. Assuming all goes well, NASA will launch four astronauts, including one woman, aboard a Crew Dragon this coming autumn.

The Demo-2 mission is proceeding despite the sudden resignation of Doug Loverro, NASA’s associate administrator for human exploration and operations. No specific reason was given for the departure, aside from a cryptic memo issued by Loverro in which he admitted to an unspecified “mistake.” Loverro said this mistake had nothing to do with the Demo-2 mission, and there’s speculation that his gaffe was related to a procurement issue for the upcoming Artemis mission to the Moon.