Sony’s WF-1000XM3s raised the bar for noise cancelling capabilities on wireless earbuds, but a lack of waterproofing and a £200 price tag limited where they could be used. Wearing them on rainy days or during sweaty workouts just wasn’t worth the risk. But Sony’s new WF-SP800N earbuds, out now in the US and available from July 2020 in the UK, not only pair noise-cancellation with IP55 water resistance, they do so with a fitness-focused design that’s more comfortable to wear – and they even come with a cheaper price tag.

We were impressed with the noise-cancelling capabilities that Sony managed to squeeze into its WF-1000XM3 earbuds without crippling their battery life when those earbuds were released in July of last year. While not as capable at submerging you in silence as Sony’s larger ear-isolating WH-1000XM3 headphones are (they’re still our top choice for those seeking silence) the WF-1000XM3 earbuds outperformed everything else on the market – but they weren’t perfect.

What is it?: A cheaper version of Sony's excellent WF-1000XM3 wireless earbuds that pair noise cancellation with IP55 water resistance and a fitness-focused design.

Like: Some of Sony's best fitting and most comfortable wireless earbuds with solid noise cancellation.

Dislike: Charging case is bulky; touch controls on the side of the earbuds are easy to accidentally tap and activate.

The extra tech needed for that industry-leading noise cancellation, including multiple mics and a battery good for six hours between charges, meant Sony’s flagship earbuds were a bit on the bulky side. I’ve struggled with finding the proper sized silicone tips to keep the WF-1000XM3 earbuds securely in my ears, and have never really managed to achieve the perfect fit. So I usually reach for Apple’s AirPods Pro instead when I’m headed out the door and want noise-cancelling earbuds that I know will stay put. But that’s no longer the case. As far as my ears are concerned, Sony’s new WF-SP800N wireless earbuds deliver the same excellent sound and noise-cancelling performance as the WF-1000XM3s do, but with an improved design that stays put.

The size difference can probably be attributed to the WF-SP800N’s (left) improved battery life, but thanks to silicone ear hooks, they’re easier and more comfortable to securely wear than the Sony WF-1000XM3’s (right). (Photo: Andrew Liszewski/Gizmodo)

Apple’s AirPods Pro (left) are much smaller than the WF-SP800Ns (right) but have a mere 4.5 hours of battery life compared to 9 hours for the new Sonys. (Photo: Andrew Liszewski/Gizmodo)

Included with the Sony WF-SP800Ns are two different sizes of silicone ear hooks that can be swapped as needed to fit your ear. (Photo: Andrew Liszewski/Gizmodo)

I’m surprised at how well the WF-SP800Ns stay perched in my years, because sitting side by side they actually seem ever so slightly larger than the WF-1000XM3s. But with the SP800Ns, Sony has included silicone arc supporters in two different sizes that not only help the earbuds better secure themselves in your ear, they also help take some of the pressure off the silicone tips that rest in your ear canal. That makes them more comfortable to wear for longer periods. Try as I might, even with vigorous head-shaking, I can’t dislodge them. 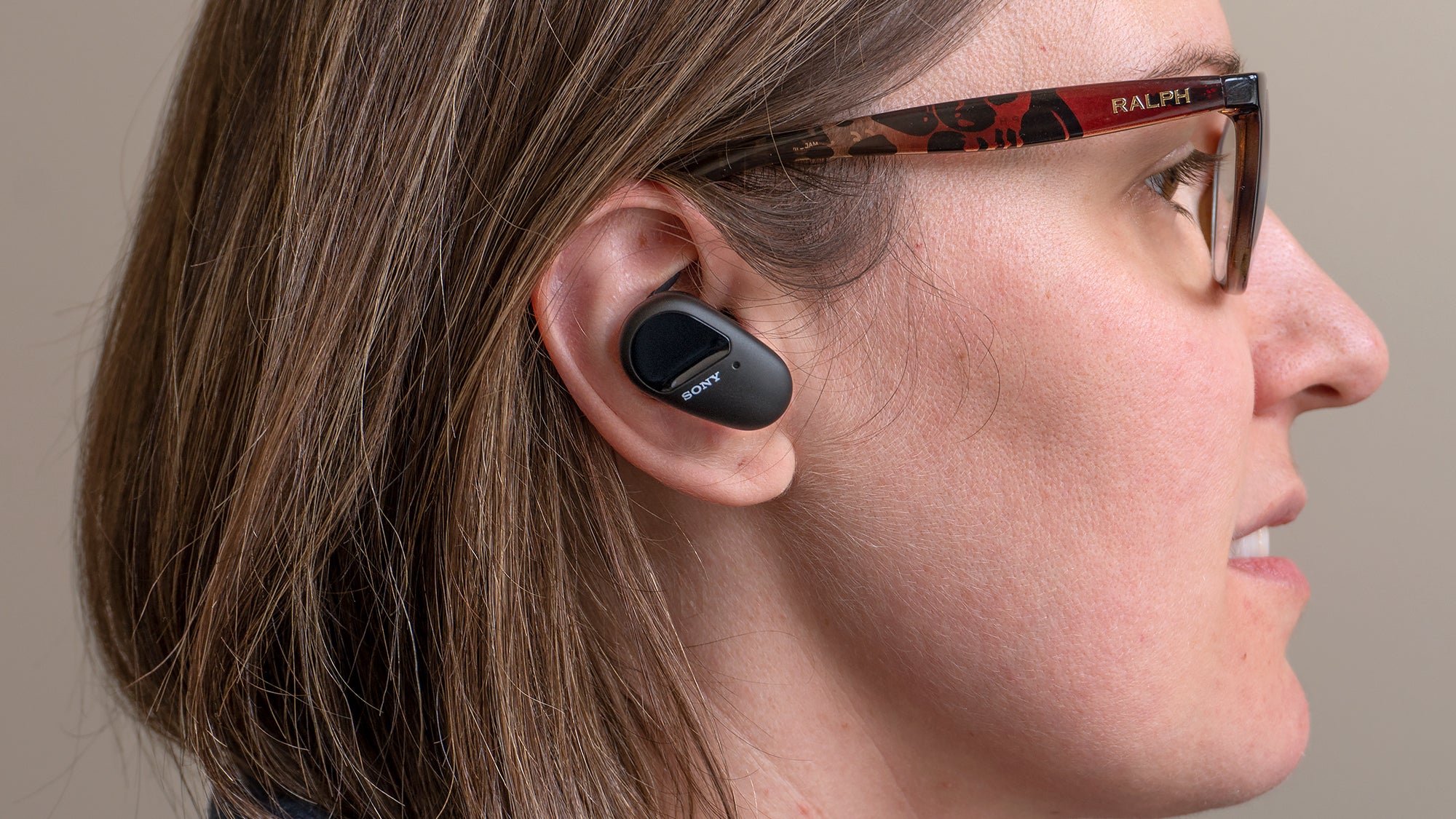 The Sony WF-SP800Ns don’t disappear into your ears like the excellent Jabra Elite Active 75t earbuds do, but they’re not gigantic, either, given they boast excellent noise-cancelling capabilities. (Photo: Andrew Liszewski/Gizmodo)

Being able to wear them comfortably for hours is great, because whereas the WF-1000XM3s boasted six hours of battery life per charge, the new WF-SP800Ns can run for up to nine hours with noise cancellation activated, or 13 with NC turned off. It also explains why they’re so much larger than Apple’s AirPods Pro, which can only offer about 4.5 hours of music playback with noise cancellation turned on. 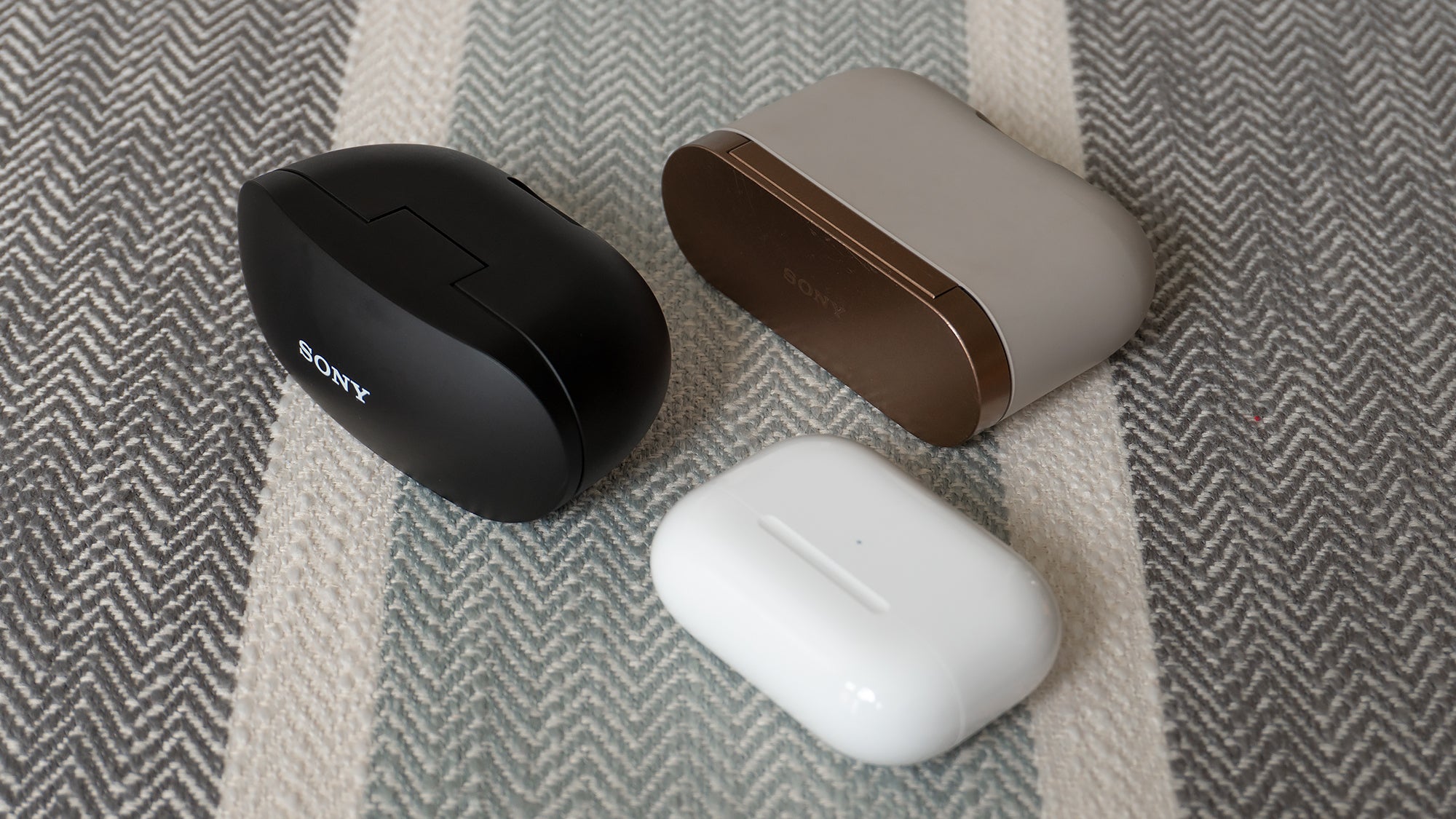 One area where Sony still lags behind Apple and even Google in wireless earbuds is the design of its charging cases – they are absolutely massive by comparison. I find the AirPods Pro case, which expands the earbuds’ battery life from 4.5 to 24 hours, very easy to slip into a pocket. I can’t say the same for the WF-SP800Ns charging case, which doubles the earbuds’ battery life from 9 to 18 hours. (Sony also promises just 10 minutes of charging will give you at least a full hour of music playback.) The case fits in a jacket pocket, but feels too bulky to stash away in a pair of jeans. It would also be nice if Sony introduced wireless charging to its earbud cases, instead of just USB-C. Being able to simply drop my AirPods Pro case on a wireless charging pad is wonderfully convenient, and it’s something I miss when using Sony’s earbuds. 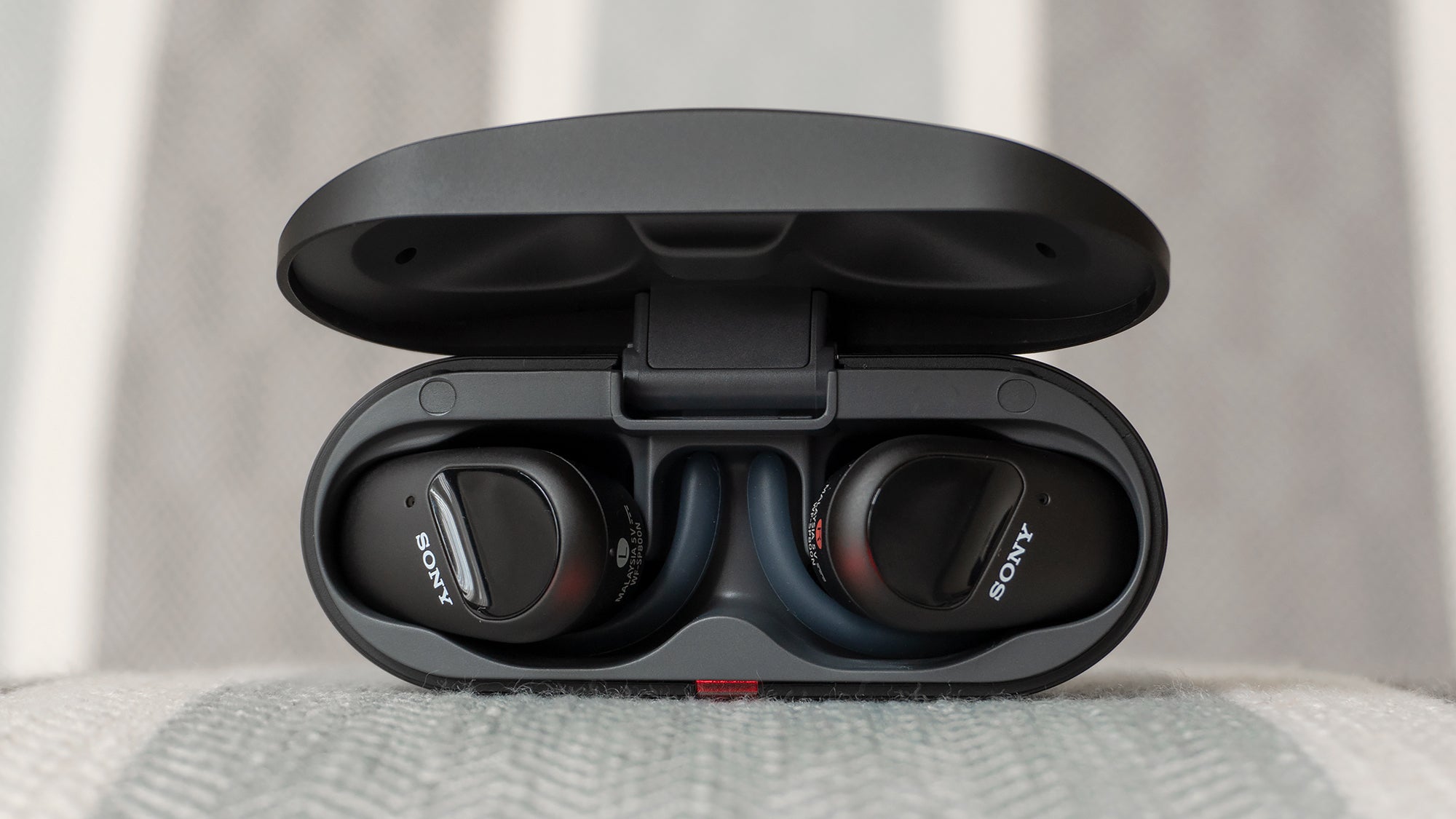 Of all the wireless earbuds I’ve tested, the Sony WF-SP800Ns are the easiest to remove from their charging case, which is occasionally a minor source of frustration for me. (Photo: Andrew Liszewski/Gizmodo)

The noise cancellation included with the new WF-SP800N earbuds isn’t quite as advanced as what the older WF-1000XM3s use, because the new ‘buds lack the company’s fancy QN1e noise-cancelling processor, but I can’t really hear the difference between the two. Given the current pandemic, I had to simulate sounds such as a noisy office setting for my testing (hopping on a crowded train unfortunately wasn’t an option), and if you were to strain your ears and focus all of your attention on the noise-cancelling performance between each pair, you might find a sound or two that slips through the new SP800Ns. But with music-playing, as far as I’m concerned, Sony’s new earbuds perform just as well as their predecessors did for day-to-day activities.

I’d still give slightly higher marks to the sound quality coming from the WF-1000XM3s, but I’ve long preferred earbuds with heavier bass performance, and while the 800Ns and 1000XM3s both use six-millimetre drivers, Sony’s newer earbuds provided some much appreciated extra kick in the low-end. But as with the noise cancellation, I’d say the difference in sound quality between both pairs is negligible for the average user. They both sound great, and each allow you to tweak and customise the sound using Sony’s companion app on iOS and Android so you’re not necessarily stuck with how they perform right out of the box.

With the WF-SP800N earbuds, Sony is also introducing a new feature to its headphones app. Using a mobile device’s sensors, it can already detect when a user is sitting, walking, or running, and automatically adjust sound settings so they’re optimised, say turning on ambient sound boosting while you’re out for a run. The update (which wasn’t available while I was testing the WF-SP800Ns) introduces location-based profiles so you can customise how the earbuds work based on GPS. Options include turning on noise cancellation when you get to the office or tweaking the EQ for extra thump when you arrive at the gym for a workout. 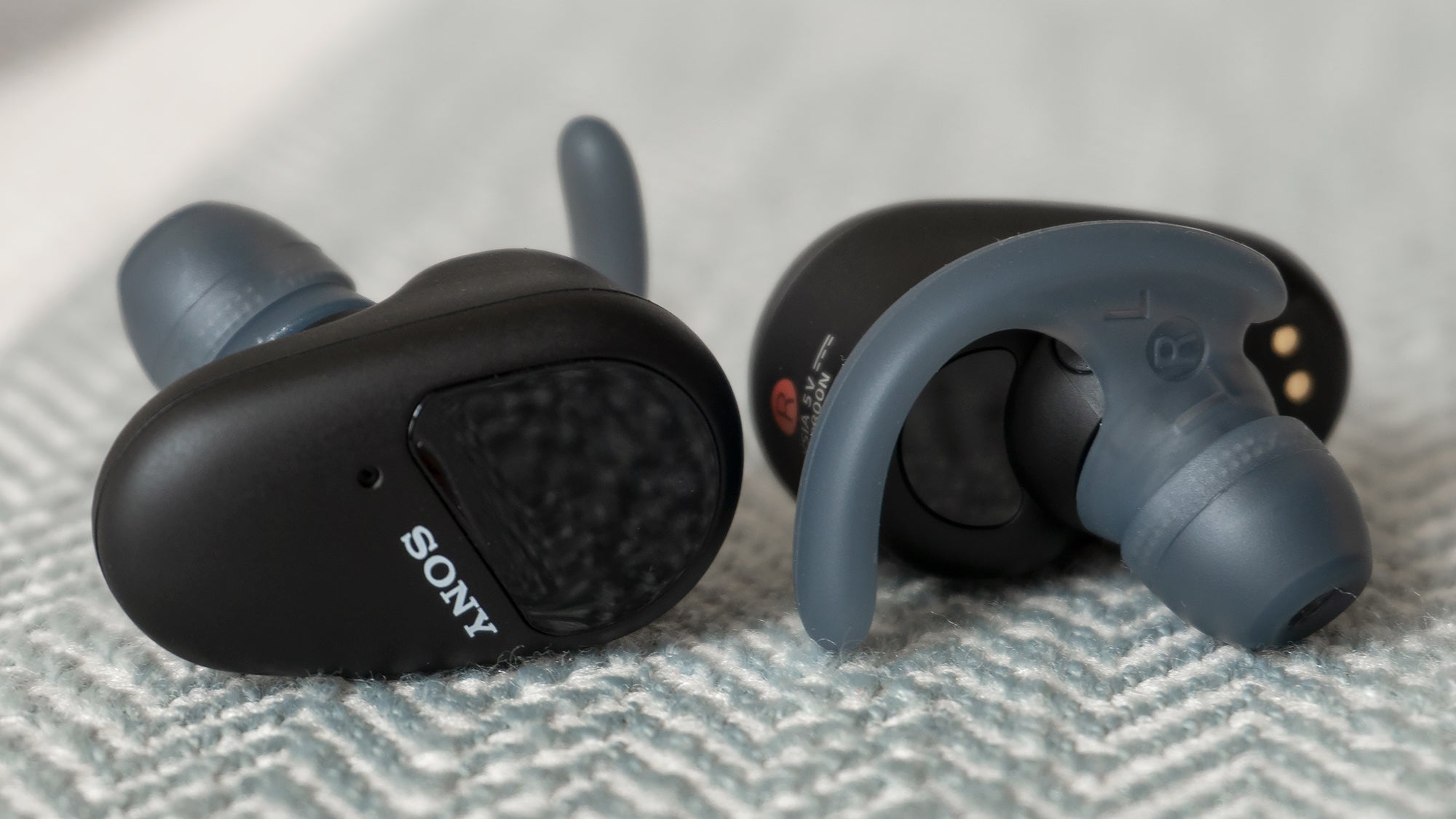 The glossy panel on the outside of the WF-SP800Ns detects gentle touches for quick access to certain functions (like playback control) but it’s very sensitive and easy to accidentally trigger. (Photo: Andrew Liszewski/Gizmodo)

Aside from the bulky charging case, my only other real complaint with the new Sony WF-SP800N earbuds is that they carry over the same ultra-sensitive exterior touch panel from the WF-1000XM3s. Having quick access to playback controls, noise cancellation, and volume is nice, but it’s too easy to accidentally tap and activate the panels, especially when handling the earbuds while you put them in or take them out. There’s also a slight delay between when you tap the panel and when a function is performed, which is often long enough for you to assume the tap wasn’t registered and try it again. The overall experience is a bit on the frustrating side, and I tend to just stick to my smartwatch for controlling my music.

If you’re looking for some peace and quiet but don’t want the bulk of over-the-ear headphones, Sony’s earbuds continue to offer the best noise cancellation in a compact package, but the company has managed to best its top-of-the-line offering with an alternative that’s actually £20 cheaper. At around £180, the new WF-SP800N earbuds deliver sound and noise cancellation that’s just as impressive as Sony’s flagship earbuds, but with an improved design that’s more comfortable and secure to wear whether you’re being active or just sprawled out on the couch. With added IP55 dust and water resistance, meaning you can simply wash them off after a sweaty workout, these are now the Sony earbuds to beat.