The Big Bass on Sony’s New Cheap Earbuds Is Incredible

When headphone makers claim their devices offer boosted bass performance, it often means they’ve tweaked the sound through software to artificially emphasise low-end frequencies. Sony’s new WF-XB700 wireless earbuds do it the right way, with drivers twice as large as what you’ll find in most other earbuds. They’re loud, they thump, and if that’s the only feature you care about, you won’t feel cheated spending £130 on these.

As truly wireless earbuds become more common (just try and name a company who doesn’t offer them these days), the devices have become much more affordable. Many companies are now offering cheap alternatives to help them compete with Apple’s popular AirPods. Sony’s top-of-the-line WF-1000XM3s might offer industry-leading sound and noise cancellation in a wireless earbud, but not everyone is prepared to spend £220 on a gadget that’s easy to accidentally drop in a toilet. The company’s new WF-XB700s are primarily targeted at those hunting for wireless earbuds on a budget, but they might also appeal to those, myself included, who have so far been disappointed with the sound performance of what’s already out there.

What is it?: Sony's cheapest wireless earbuds, which trade special features for impressive bass performance.

Like: Loud, excellent bass reproduction without distortion. Physical buttons easier to use than the touch sensitive pads used on other Sony earbuds.

It’s not that Sony’s WF-1000XM3s or the Apple AirPods Pro sound cheap or disappointing; you just really notice the difference when you pop Sony’s WF-XB700s into your ears. Most wireless earbuds use 6-millimetre drivers – the moving part of the tiny speaker inside headphones that pushes the air and creates sound waves – the WF-XB700s feature 12-millimetre drivers, which are twice as large. That doesn’t necessarily translate to sounds that are twice as loud, but bass performance is noticeably more pronounced, and the WF-XB700s are undoubtedly louder at peak volume than Sony and Apple’s other offerings.

I’ve long preferred earbuds with 12-millimetre drivers, which meant I had to stick with Sony’s wired offerings for many, many years. It’s only recently, wooed by the convenience of wireless earbuds, that I’ve capitulated and settled for smaller alternatives. But despite the feature compromises, the sound profile alone has me often reaching for the Sony WF-XB700s over my AirPods Pro. 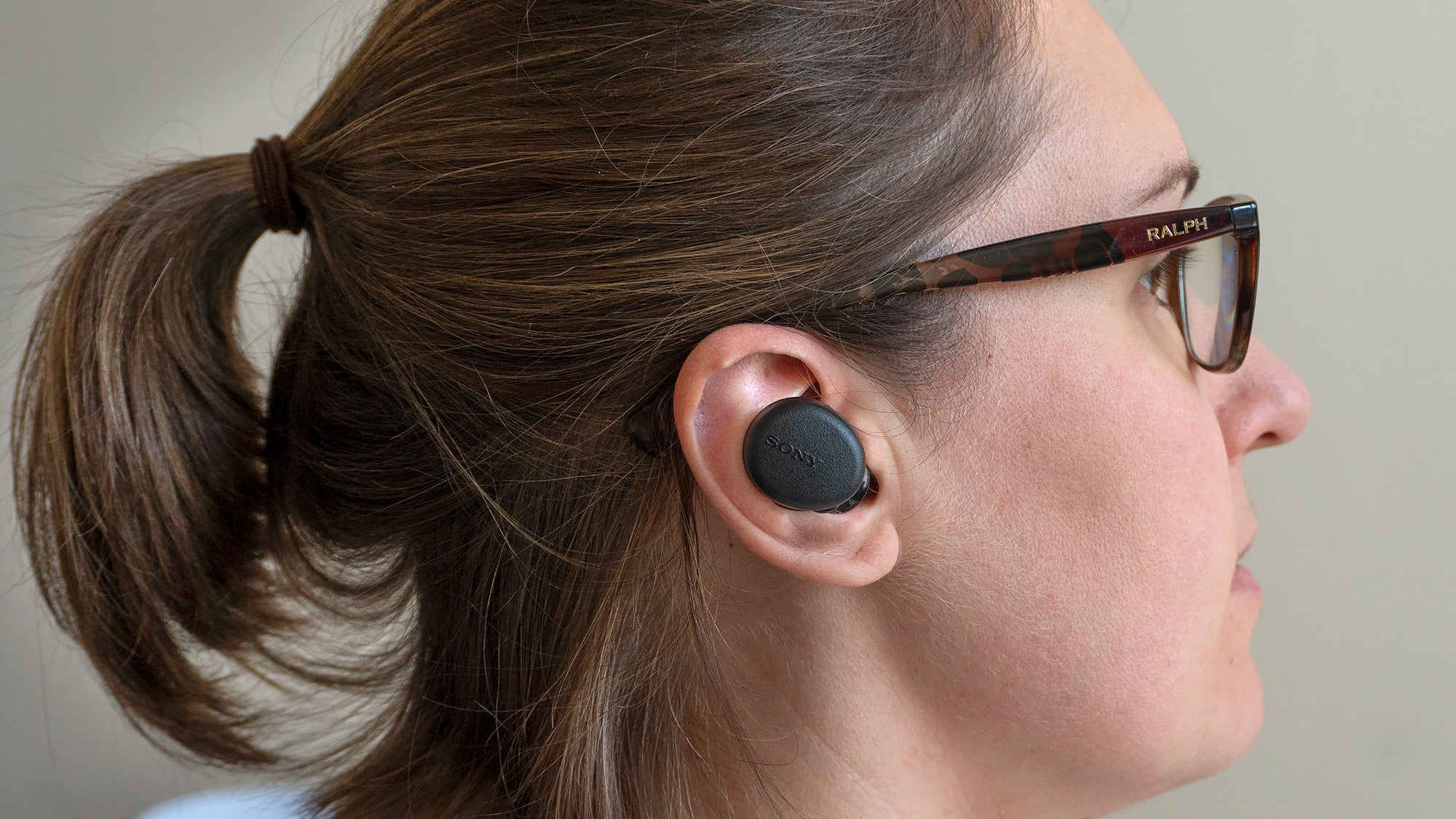 It’s no surprise that £130 wireless earbuds are not the smallest option out there, but they’re definitely not the largest earbuds we’ve ever seen. (Photo: Andrew Liszewski/Gizmodo)

To accommodate the larger drivers, and a battery big enough to work for nine hours between charges, the WF-XB700 wireless earbuds have a rather bizarre design with an oversized pod that sticks far out of your ear. They’re definitely one of the more conspicuous earbuds you can wear. 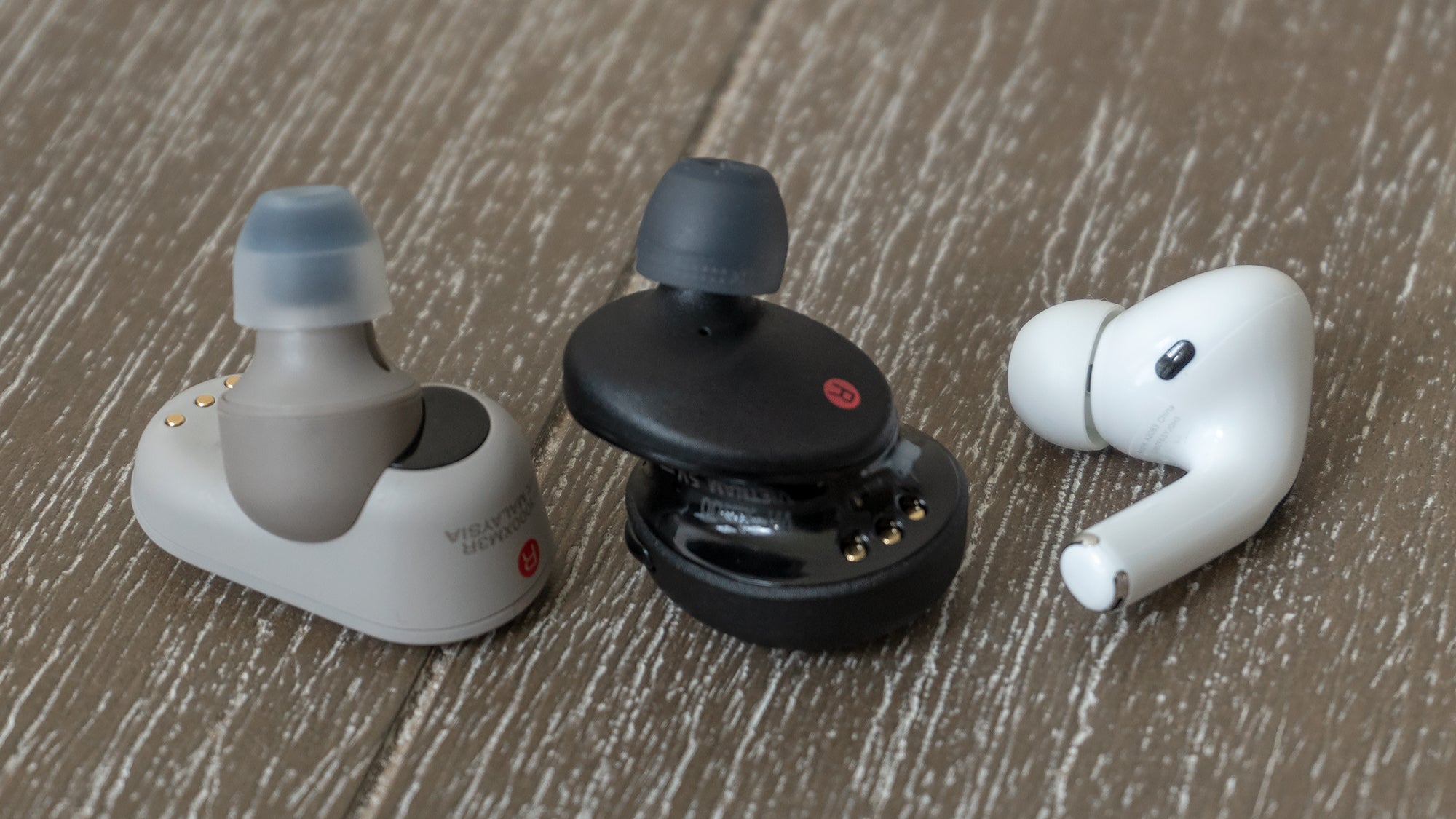 The Sony WF-XB700s are big earbuds, and they stick out of your ears. But they’re comfortable, and tend to stay in place better than the AirPods Pro. (Photo: Andrew Liszewski/Gizmodo)

But while the WF-XB700s earbuds are larger than the Apple AirPods Pro and even the beefy Sony WF-1000XM3s, I actually find them to be more comfortable to wear than Sony’s flagships. They’re not as comfortable as the AirPods Pro, but I find they stay in my ears much better while out for a walk or activities more vigorous than sitting at a computer. Despite the price tag, Sony has ensured these earbuds won’t make you hate your ears after a long listening session. 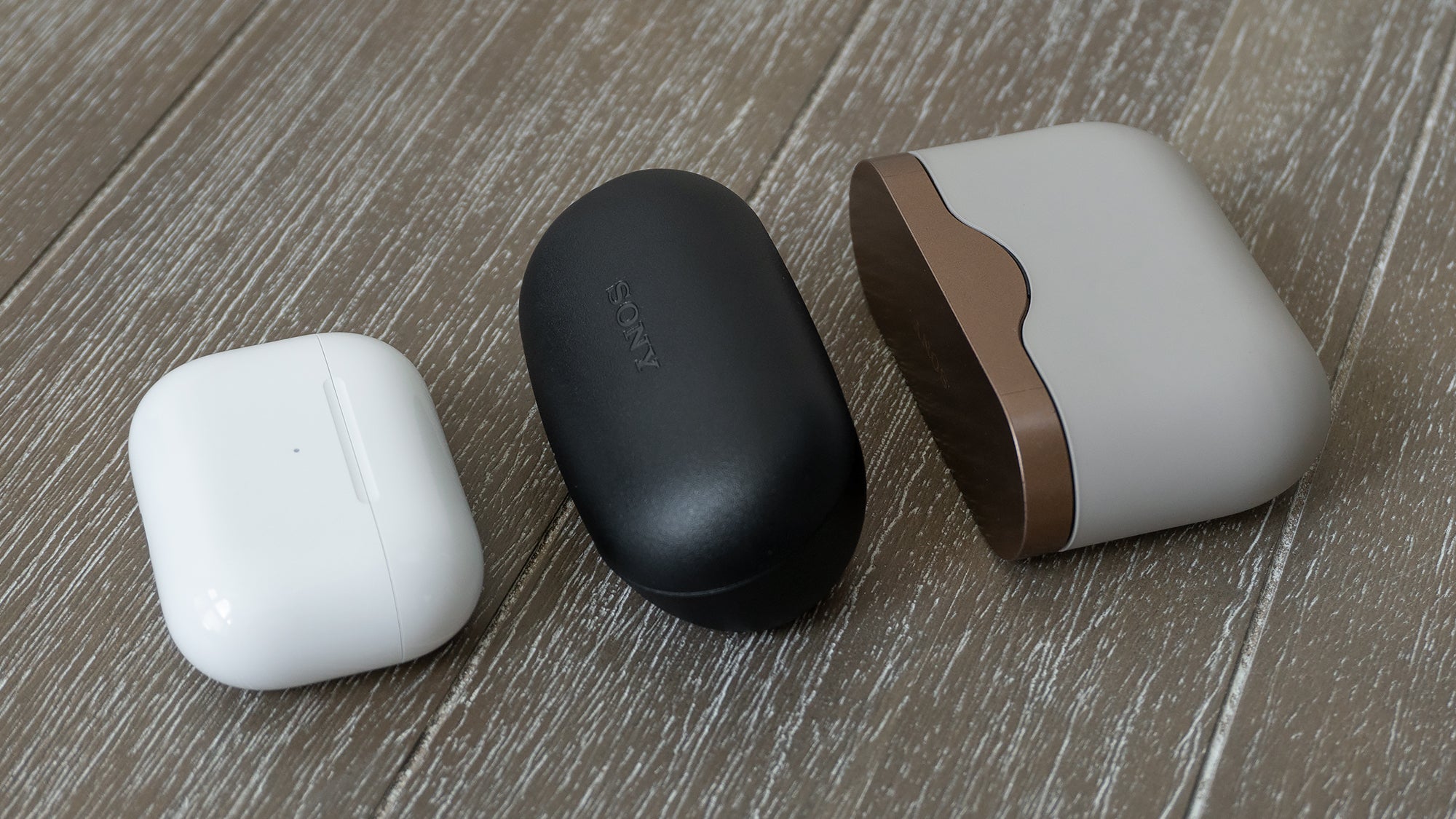 The WF-XB700s’ charging case is still larger than what you get with the Apple AirPods Pro, but it’s smaller than the case included with Sony’s top-of-the-line earbuds, and much easier to slip into a pocket. (Photo: Andrew Liszewski/Gizmodo)

The included charging case is just as bare bones as the earbuds themselves, featuring a textured plastic all over that feels comparatively cheap. It will double the WF-XB700s' battery life from nine to 18 hours, and charges over USB-C – like Sony’s pricier wireless earbuds, there’s no wireless charging offered here. 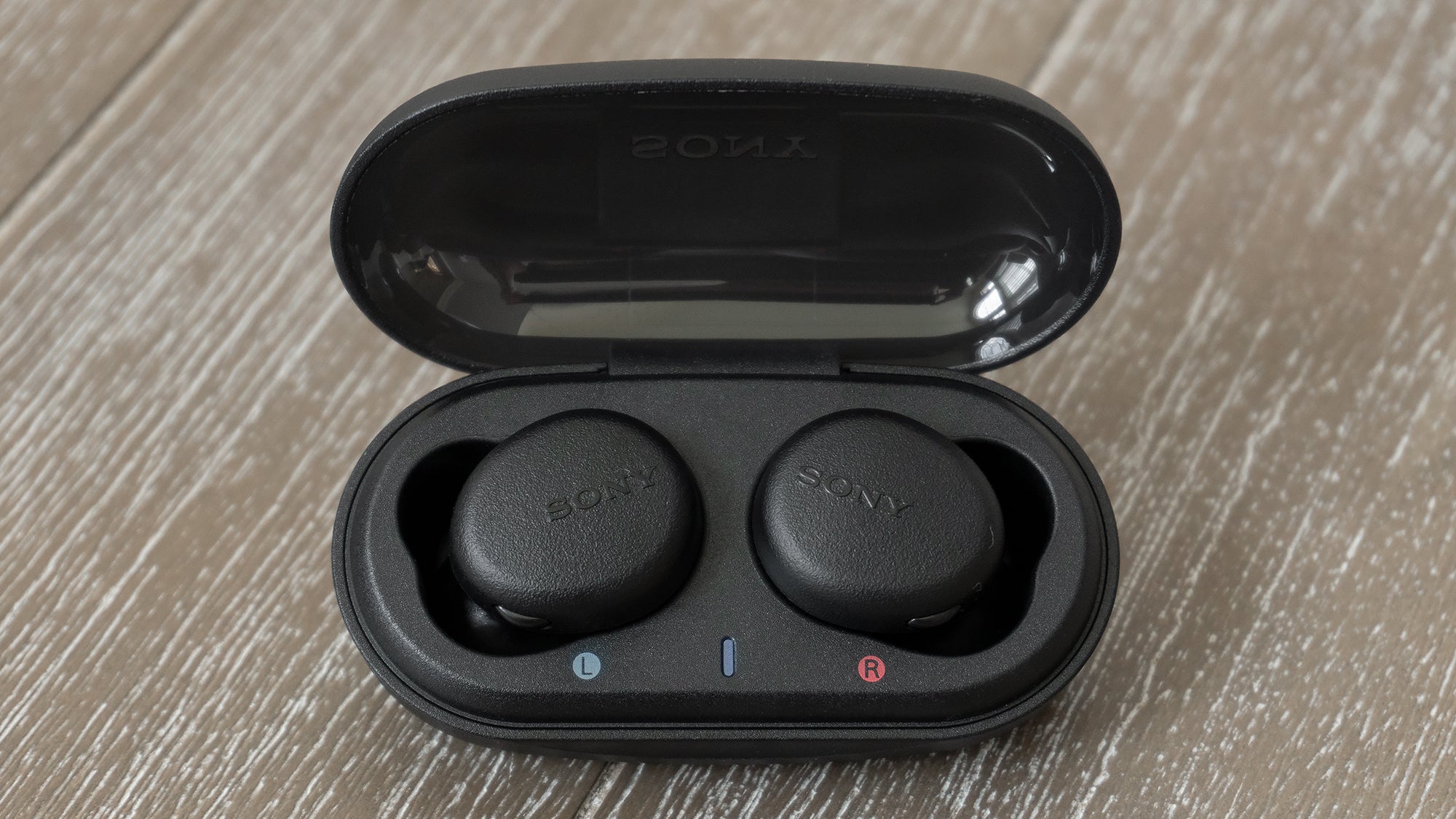 The WF-XB700s’ charging case feels cheap, but its flat bottom design means it can be placed on a desk while still providing easy access to the earbuds. (Photo: Andrew Liszewski/Gizmodo)

But unlike the charging cases included with the Sony WF-1000XM3s and the recent WF-SP800Ns, the WF-XB700s’ case includes a simple design improvement with a flat bottom allowing the earbuds to be easily removed and reinserted with the case sitting on a desk. It’s a small thing, and something you wouldn’t necessary think was noteworthy, but it makes for a big usability improvement, while still allowing the case to be compact enough to slide into a pocket with relative ease. 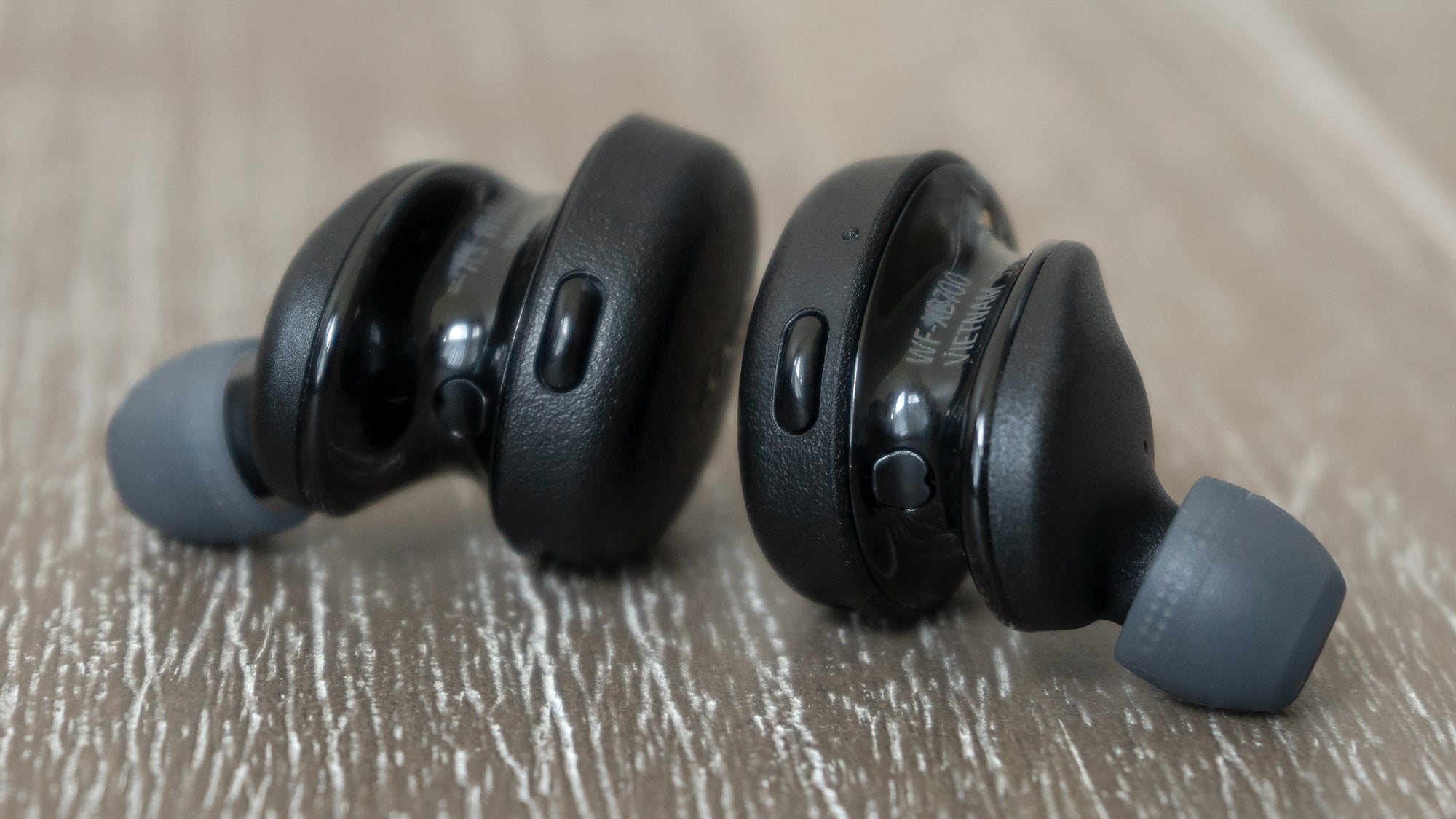 The Sony WF-XB700 earbuds feature physical buttons instead of touchpads that are more responsive and harder to accidentally press. (Photo: Andrew Liszewski/Gizmodo)

That £130 price tag means there are a lot of features missing from Sony’s new low-end offering. There’s no noise cancellation, no ambient sound boosting to better hear what’s going on around you, no ear detection to automatically pause music playback when removed, and the WF-XB700s can’t connect to Sony’s mobile headphone app, which means you’re unable to tweak the sound profile.

They’re about as basic as wireless earbuds can get, but there is one feature I much prefer over Sony’s higher-end models. I’m not a fan of the overly sensitive touch-sensing pads used on the Sony WF-1000XM3s and WF-SP800Ns to access playback controls and other shortcuts. The WF-XB700s instead feature physical buttons positioned in a way that can be pressed by securely pinching the entire earbud. They’re almost impossible to accidentally activate, they respond immediately, and you can press them without dislodging the earbud from your ear.

It’s doubtful that Sony is going to sway iPhone users away from Apple’s £159 AirPods – for an extra £29 you’re getting a lot of great features, like solid connectivity and decent sound quality, from those white buds. But for Android users, whose cheaper options include the excellent £159 Samsung Galaxy Buds+, Sony’s WF-XB700s, which one-up Samsung with IPX4 water and sweat resistance, make an excellent case for themselves for just £130. If you’re already a wireless earbud user you might find yourself missing some more advanced and common features. But if you’re on the hunt for your first pair, Sony’s nailed an excellent price point for what these wireless earbuds can do.