The PumPiX Asks: What if Spider-Man's Web Slingers Shot Hand Sanitiser Instead?

As impressive as Spider-Man’s abilities are, there’s not much that a superhero who shoots webs from his wrists can do to combat covid-19. But what if you upgraded Spidey’s web-slingers with virus-killing hand sanitiser instead? That’s the idea behind the wrist-worn PumPiX blaster.

Everyone is getting anxious for life to return to normal in the near future, but that ‘normal’ is going to include social distancing, mask-wearing, and diligent hygiene habits until a vaccine for covid-19 is available. We can also expect to see a variety of new gadgets that promise to help make the new norm more tolerable, as well as gadgets like the PumPiX that maybe aren’t quite as useful as they claim to be.

Well before the world was gripped by this pandemic, hand sanitiser was readily available in containers of all shapes and sizes. You probably have a small squeeze bottle of Purell hanging off your keychain or in your bag right now, conveniently accessible for when you accidentally handle or touch something you’re not sure is clean. But the creators of the PumPiX worry that’s not convenient enough. In these trying times, they believe everyone should walk around with hand sanitiser strapped to their wrists so they can blast it on everything from door handles, to groceries, to even smartphones. 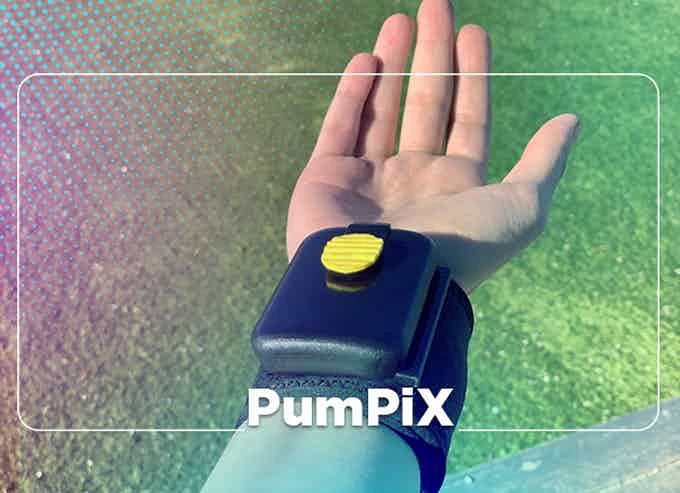 The PumPiX seems easy enough to use; you fill its chamber with sanitiser or disinfectant that’s viscous enough to be sprayed and then yank on a sliding trigger that blasts whatever surface you’re targeting. It’s good for over 100 pumps before needing a refill, so it should easily last for a run to the shops or trip to the pharmacy, assuming you don’t get too carried away. What’s most problematic about the PumPiX is its design. If it were as invisible as Peter Parker’s web-slingers (the mechanical versions, not the biological ones) then yeah, it would be hard to argue against how convenient the PumPiX would be. But the device looks even beefier than the largest smartwatches, with a thick cuff wrapped around the user’s wrist. It seems like you’d have a hard time even getting a coat’s sleeve over it, making you wonder why anyone would opt for this over a tiny bottle of Purell.

If you’re prone to forgetting your hand sanitiser when you venture outside your home, then maybe the PumPiX could be a useful way to ensure you always have sanitiser on hand. In that case, you can pre-order one through a Kickstarter crowdfunding campaign with a $29 (£24) contribution towards the $5,000 (£4,101) funding goal which has already been surpassed. There are the usual risks that come with any crowdfunded product; snags during production could result in the estimated delivery date of sometime in August getting pushed back until later this year – or worse. In the meantime, before your superhero upgrade arrives you can just keep diligently washing your hands like the rest of us, and using common sense.