The Weirdest Images Ever Taken on Mars

In the 19th century, Italian astronomer Giovanni Schiaparelli thought he spotted canals on Mars through his telescope. Since then, we’ve seen lots of things on the Red Planet that aren’t really there. From spoons and squirrels to campfires and women wearing dresses, we present to you the most notorious false sightings on Mars.

We so very, very badly want to find life on Mars, making the planet a gigantic Rorschach test onto which we can project our hopes and dreams. It doesn’t help that these images, taken by satellites and rovers, are often grainy, ambiguous, and lacking a sense of scale. As our wishful eyes gaze upon this alien landscape, our minds play tricks, causing us to substitute the known for the unknown.

Below is a selection of our favourite Martian optical illusions.

The Face on Mars

The Face on Mars. (Image: NASA)

One of the most iconic illusions came in 1976 when NASA’s Viking 1 probe captured the Face on Mars in the Cydonia region. NASA described the feature as a “huge rock formation...which resembles a human head...formed by shadows giving the illusion of eyes, nose and mouth.”

Naturally, some people interpreted this apparent face, which measures nearly 2 miles long, as a monument from a long-lost Martian civilisation. Subsequent photos of the feature revealed it to be a mesa – basically an unremarkable flat-topped hill. The Face on Mars is now used as a classic example of pareidolia, a psychological phenomenon in which we project faces and other familiar things onto otherwise inanimate and mundane objects.

Oh hey, a spoon on Mars. Either NASA’s Curiosity rover crashed a Martian picnic, or it’s a fortuitously shaped rock formation. And weirdly, it’s not the first spoon to be spotted on the Red Planet. If it is a bona fide spoon, however, Martians probably used it to eat this jelly doughnut.

A Light in the Distance

A speck of light, which turned out to be a visual artefact created by a cosmic ray. (Image: NASA/JPL-Caltech/Gizmodo)

In 2016, Curiosity took a sweet photo of the Kimberley Waypoint in Gale Crater, but a number of people noticed a strange light off in the distance, prompting outlandish theories, such as an alien civilisation living beneath the surface. In reality, the speck of light was likely caused by a cosmic ray, which created a visual artefact on the photograph. Personally, I’d like to think it’s Marvin the Martian enjoying some s’mores around the campfire. As to how Marvin managed to start a fire in this oxygen-starved environment, I’ll leave you to figure that out.

A shiny rock bearing a resemblance to a chunk of gold. (Image: NASA/JPL-Caltech/LANL)

There’s gold in them thar Martian hills! Or least that’s what it looked like when Curiosity stumbled upon this shiny rock in November 2018. The rover was exploring an outcrop along Vera Rubin Ridge when it made the discovery. The object is likely a nickel-iron meteorite. Curiosity has seen this sort of thing before, including a large metal meteorite in 2015 and a small meteorite similar to this one in 2016.

The strange “blueberries” observed by Opportunity rover on the Martian surface. (Image: NASA/JPL-Caltech/Cornell/USGS)

In 2004, NASA’s Opportunity rover explored an area at Meridiani Planum where the surface was covered with unusually round grey pebbles. NASA scientists saw “strange round objects we’re calling ‘spherules’ embedded in the outcrop, like blueberries in a muffin,” said Steve Squyres, member of the Mars Exploration Team, at the time. The balls varied in size, ranging from 100 micrometres to 602 millimetres in diameter. 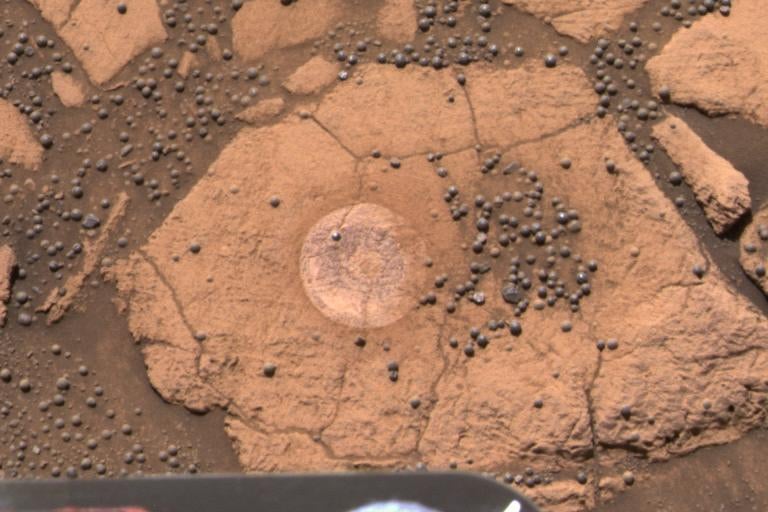 Some 16 years later, scientists remain in disagreement about these so-called “blueberries,” but they’re (probably) not biological in nature. Prevailing theories include hematite concretions formed from water, spheres produced by meteorite impacts (i.e. accretionary lapilli), and balls that formed from calcite minerals.

Nothing to see here, EXCEPT A HUMAN THIGH BONE. Or a rock. You decide.

On 28 September 2012, Curiosity photographed a cluster of dark rocks called Rocknest. It didn’t take long for eagle-eyed UFOlogist Scott C. Waring to identify an apparent squirrel in the picture, saying it’s “a cute rodent on Mars,” with its “lighter colour upper and lower eyelids, its nose and cheek areas, its ear, its front leg and stomach” are clearly visible. Panning back, however, it’s clear that the alleged squirrel is a tiny rock among many others like it.

Soon after arriving on the Red Planet, Curiosity found an apparent piece of plastic wrap on the surface, which turned out to be... plastic wrap. After some head-scratching moments at NASA, the Curiosity team concluded that the plastic fragment came from the rover itself, specifically a piece of wrap from a cable that likely came loose during landing.

In 2018, another plastic-like object was seen on Mars, but it turned out to be a thin flake of rock.

The Woman on Mars

The supposed woman on Mars, with zoomed up view inset. (Image: NASA/JPL-Caltech/Cornell University/Gizmodo)

NASA’s Spirit rover captured a stunning panoramic view within Gusev Crater on 5 September 2007, resulting in the spooky appearance of a female figure wearing a dress, her arm extended horizontally. Like the squirrel on Mars, however, a view in context reveals the woman to be a fortuitously positioned rock. That said, it is a pretty cool – and haunting – illusion.

A similar sighting happened in 2015, when Curiosity spotted a figure-like entity in the rocks.

Statue of an Ancient Neo-Assyrian Deity

The head of a limestone statue on Mars? (Image: NASA/British Museum/Gizmodo)

A photo captured by Opportunity in 2010 at Concepción Crater bore a striking resemblance to an ancient Mesopotamian sculpture, specifically a Neo-Assyrian attendant god dedicated to Nabu by Adad-Nirari III and Sammuramat. Or at least that’s what it looked like to UFOlogists.