The Polaroid camera might be back from the dead, but at £1.75 for every instant photo you snap, it makes photography an expensive hobby again. If you’re okay with a black-and-white, grainy, high-contrast aesthetic – or happen to miss the Game Boy Camera as much as I do – Oaxis’s myFirst instant camera for kids uses a built-in thermal printer so instant prints cost less than a penny each.

I can’t say I’ve ever been a big fan of lo-fi film photography. Give me lots of megapixels, a sharp lens, and Photoshop, and I’m a happy snapper. But long before digital cameras toppled the film industry, the Game Boy Camera made instant photography cheap and accessible. The four-colour, greyscale, 128x112 pixel photos Nintendo’s camera snapped now seem like cave paintings compared to what a smartphone’s camera can capture, let alone a DSLR, and those images looked even worse coming out of the Game Boy Printer accessory.

What is it?: A basic digital instant camera that prints photos in black and white on cheap thermal paper.

Like: You can buy thermal paper rolls in bulk, which makes each print cost less than a penny.

Dislike: As basic as digital point-and-shoot cameras can get; no manual controls whatsoever.

But somehow, the Game Boy camera still captured my heart, and not only because it was my first digital camera. It was simple, it was forgiving, it was fun, and it was cheap – which is probably why I’ve also developed a soft spot for Oaxis’ myFirst Camera Insta 2. Like the Game Boy Camera and Game Boy Printer, it’s a device primarily designed for kids to explore photography with the added satisfaction of easily immortalising their shots as physical prints.

On a technical level, it’s as basic as a digital camera can get, and its relatively affordable $100 (£82) price tag is reflected in the quality of the photos it takes. (They’re not pretty.) But taken as a whole, the myFirst Camera Insta 2 is a fun and affordable alternative to a Polaroid and other pricier instant camera options available now.

The myFirst Camera Insta 2's chunky design is kind of cute, but also necessary to accommodate a thermal printer and a roll of paper. (Photo: Andrew Liszewski/Gizmodo)

The large buttons on the back are all labelled with their functions, as several do double-duty. The icons are easy enough to understand, but the camera’s user interface can occasionally still be confusing. (Photo: Andrew Liszewski/Gizmodo)

The plus and minus buttons are used to navigate menu options and browse through photos, but a pair of arrow buttons would have probably been easier to understand. (Photo: Andrew Liszewski/Gizmodo)

The teal parts of the camera have a soft silicone finish making it easier to grip, and the flattened bottom allows it to stand on its own, which is a nice design touch. (Photo: Andrew Liszewski/Gizmodo)

A microUSB port hidden beneath a protective door is used for charging, while a microSD slot allows you to expand the camera’s photo or video capacity. (Photo: Andrew Liszewski/Gizmodo)

There’s even a second camera on the back of the myFirst Camera Insta 2 for snapping selfies. (Photo: Andrew Liszewski/Gizmodo)

As kid-friendly designs for gadgets go, the myFirst Camera Insta 2 is admittedly kind of adorable. It looks like a one-eyed monster from the front, with a pair of ears that double as loops for a neck strap. It’s mostly made from plastic, but the teal accents are actually soft silicone, making the chunky camera easier for smaller hands to grip, and more resistant to damage if dropped.

On the back you’ll find a set of seven buttons, including a trigger on the right, playback and print buttons across the bottom, and power and settings on the left. They’re all labelled with graphics that are fairly easy to understand if you’ve used a digital camera before, but you might have to walk a 5-year-old through what each one does a few times. I still find myself having to randomly poke at buttons to switch back to camera mode after reviewing a shot because the UI isn’t entirely intuitive, but the limited number of buttons make the process of elimination mostly painless – assuming you don’t accidentally hit the print button.

Experienced photographers will probably notice a lack of any shooting modes or settings that could help optimise a shot. The myFirst Camera Insta 2 is completely automatic: You point at a scene, press the shutter button, and hope for the best. You do have access to some pre-made novelty templates and overlays that can be added (wacky sunglasses etc.) but that’s about it in terms of image editing or enhancements. 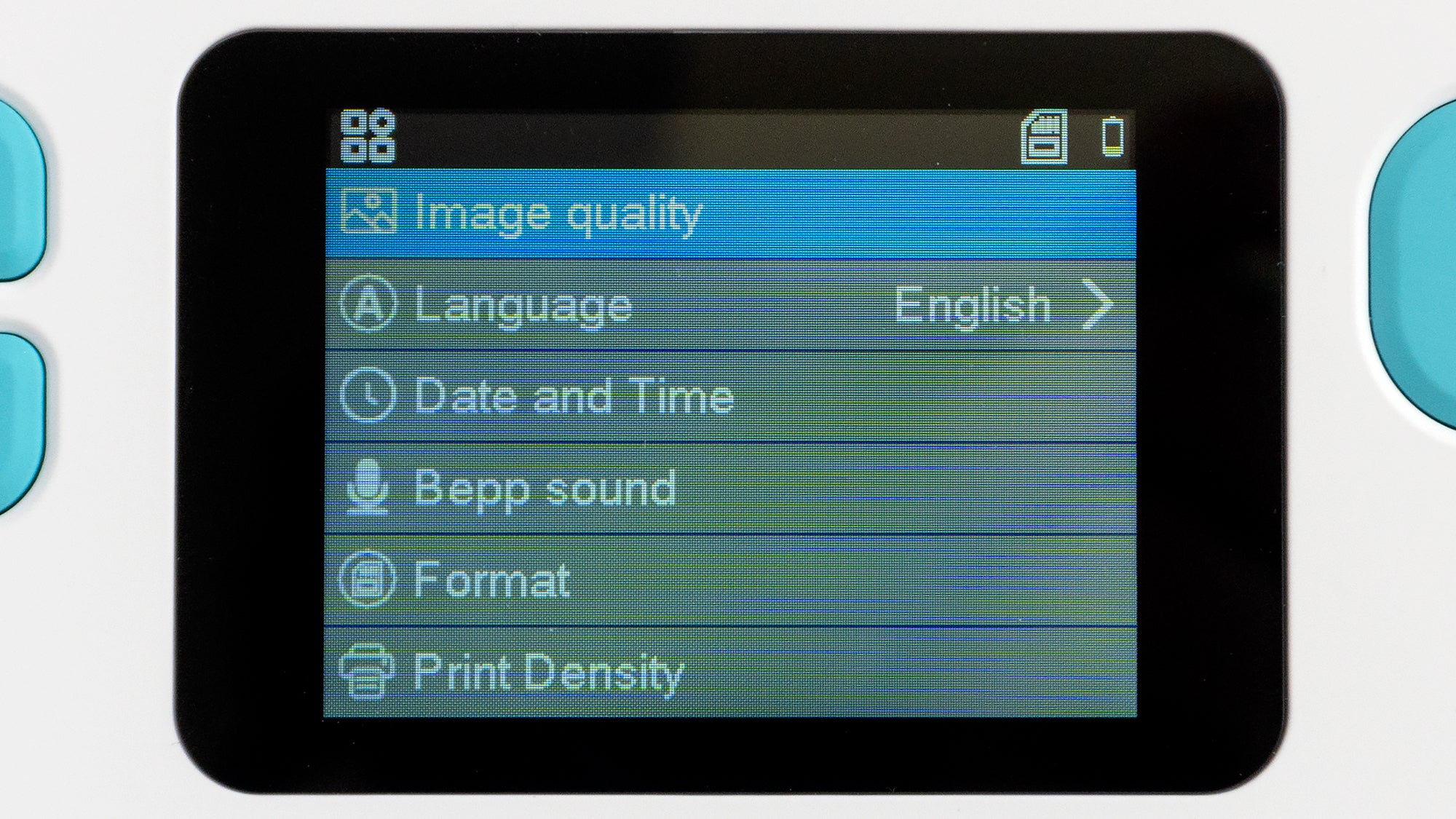 The camera’s 2.4-inch display is kind of awful, but passable as your only way for framing or reviewing shots. (Photo: Andrew Liszewski/Gizmodo)

The 2.4-inch LCD screen on the back of the camera isn’t going to win any technical achievement awards. Colour reproduction is awful, contrast is terrible, and the viewing angle is extremely limited. But it gets the job done.

The camera’s settings menu is also, not surprisingly, very limited. You can adjust the resolution of photos down from a full 12-megapixels if you’re trying to maximise how many shots you can fit on an inserted microSD card, adjust the date and time, turn off beeps when buttons are pressed, and a few other minor tweaks. One option I was hoping to find but unfortunately didn’t was the ability to turn off the date and time that’s overlaid in the corner of every photo you take.

There’s no getting around it: the quality of the photos the myFirst Camera Insta 2 shoots is really awful. (Photo: Andrew Liszewski/Gizmodo)

Even when shooting outside with lots of sunlight, the focus is soft, colours are muted, and image compression wreaks havoc with fine details. (Photo: Andrew Liszewski/Gizmodo)

It’s a camera designed for kids, so I don’t expect it to compete with a pricier point-and-shoot camera, but even cheap tablets can muster better shots than the myFirst Camera Insta 2 can. (Photo: Andrew Liszewski/Gizmodo)

As modern digital cameras go, the quality of the images the myFirst Camera Insta 2 takes is...well...abysmal. You will never choose it over your mirrorless camera, your smartphone, or probably even the camera on your tablet. Colours are muted, the image compression is unforgiving, the focus is soft, and it’s a noise smorgasbord if you’re shooting anywhere with limited light. Even a 5-year-old who’s used a smartphone or tablet’s camera will wonder why images look so bad, and the quality is comparable to what I would have expected from a webcam 15 years ago.

Installing a roll of thermal paper couldn’t be easier: You just open a door on the front of the camera, drop the roll in, and then ensure the end sticks out of a thin slot when you close the camera up again. (Photo: Andrew Liszewski/Gizmodo)

You can use a pair of scissors to separate a printed photo from the roll, but a set of serrated teeth work just as well for quickly tearing each print off. (Photo: Andrew Liszewski/Gizmodo)

But as with the Game Boy Camera, the image quality of the myFirst Camera Insta 2's sensor isn’t really a deal breaker because most users aren’t going to even bother transferring photos to a computer. The device’s real appeal is its ability to instantly print out shots using the same rolls of cheap thermal paper that a cash register does. The instructions specify the camera can only accommodate rolls measuring 57 millimetres wide with a diameter no larger than 26 millimetres. From my testing, that means a roll less than 30 feet long; any longer and you’ll have to manually unravel it until it fits inside the camera.

Thirty feet is still enough length to let you print roughly 60 shots per roll, and I’ve found 20 packs of the appropriately-sized thermal paper on Amazon for about £10. Crunch the numbers and that works out to less than a penny per print. It only takes about 10 seconds for a printout with the camera’s print density at its highest setting, and the immediate satisfaction means that it probably won’t take long for a kid to go through an entire roll. But an afternoon’s worth of distraction is easily worth that kind of a bargain.

If you’re expecting Ansel Adams quality prints from the myFirst Camera Insta 2, you’re going to be disappointed. Thermal printers are mostly designed and optimised to print out letters and numbers, not full colour photos with subtle gradients and fine details. That being said, the results here are definitely a step up from the Game Boy Printer, and the high-contrast black and white shots have a charming aesthetic. More importantly, kids won’t really care. As long as they can make out the goofy face they just made, they’ll be happy.

The quality of your prints will vary depending on the quality of thermal paper you use. The rolls included with the camera, which feel like they have a glossier finish, produced much better results than the cheaper rolls I purchased in bulk from Amazon. The cheaper rolls crushed details in the darker areas of an image, and all but eliminated mid-tones. Again, I don’t think kids will particularly care, but if you’re going to embrace the aesthetic of using a thermal printer as a photo printer, maybe just splurge a bit on your paper rolls. 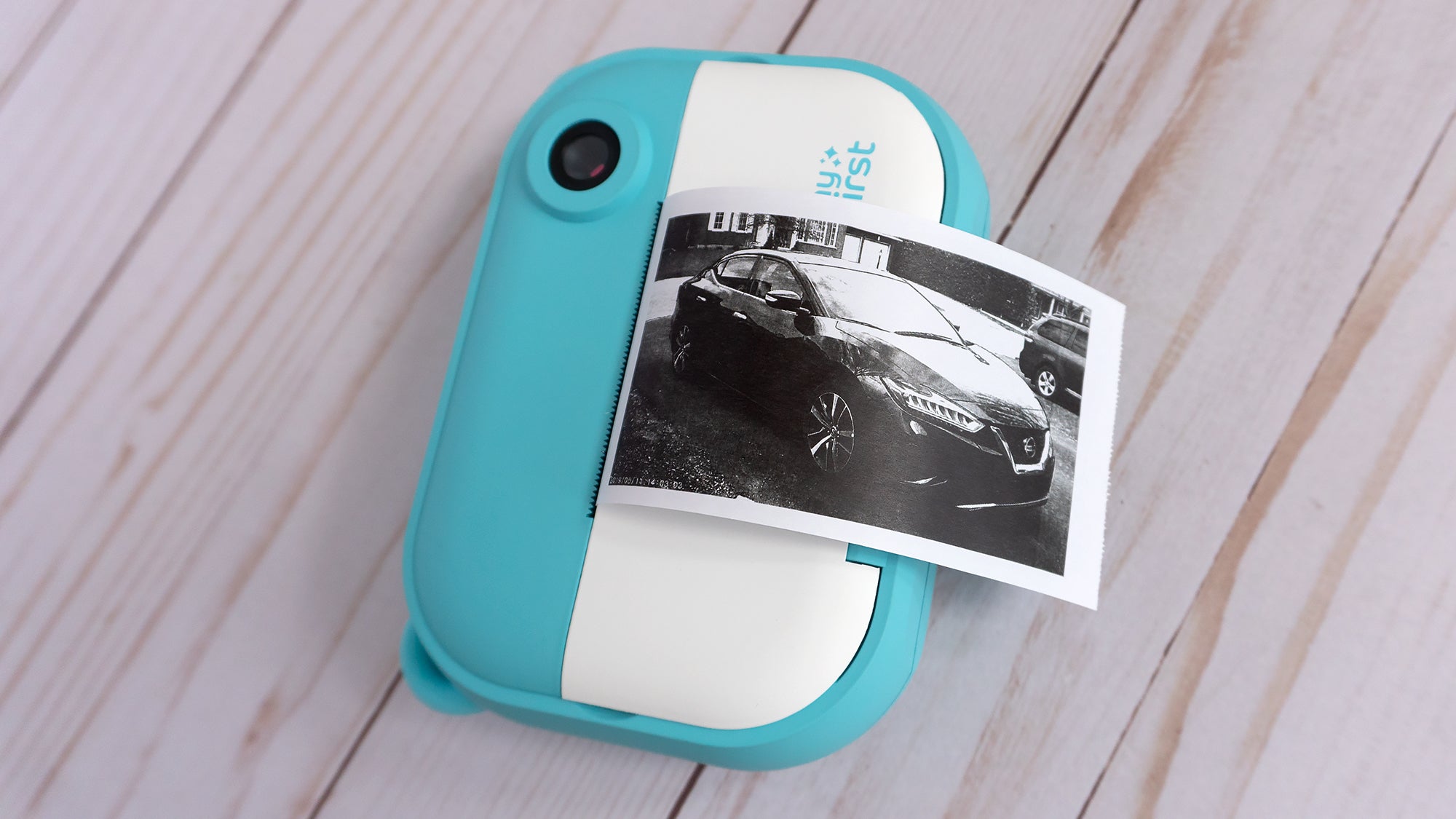 The whole is definitely greater than the sum of its parts with this camera. (Photo: Andrew Liszewski/Gizmodo)

If you’re comparing the various functions of the myFirst Camera Insta 2 to other products on the market, it doesn’t stand a chance. But when you step back and look at it as a whole, as a gadget designed to get kids interested in photography by letting them print out their shots by the hundreds at minimal cost, it succeeds in delivering a satisfying experience. A thermal printer will never be able to compete with the colour inkjet printer sitting in your office, but how often do you print out photos on it? Very rarely, I bet, given the costs. Like the Game Boy Camera, the myFirst Camera Insta 2's limitations are actually what make it so enjoyable.