When stay-at-home orders were first issued, wearing the Muse S headband, a smart headband intended to help you practice mindfulness and meditation, seemed like a good idea. I am an overly anxious person with too much brain poisoning from Twitter and I’m weathering lockdown in a cramped studio flat with my partner and two needy pets. Now seemed like a great time to get on board the mindfulness train. There was just one hitch.

Over the years, I’ve tried several YouTube meditation channels and apps – Headspace, Smiling Mind, and Calm, to name a few – but none of them have ever stuck. The whispery voices and wind chimes didn’t help me chill; they just made me roll my eyes. Still, the health benefits of meditation are real, and the whole pitch of the Muse S headband is that it helps you get into that meditative zone that I struggle to find by providing real-time feedback based on your brain waves.

What is it?: A smart meditation headband

Like: Headband is comfortable, nicely made. Lots of different types of meditation sessions.

This thing packs in electroencephalography (EEG) sensors – which measure your brain’s electrical activity – as well as an optical heart rate sensor, accelerometer, and gyroscope. The idea is that the sensors monitor your vitals in real time, and uses that data to help you focus via audio cues. For someone like me who hates the woo-woo spiritualism often associated with mindfulness, this seemed like the perfect, data-based compromise.

The first thing I noticed after unboxing the Muse S is it’s less futuristic-looking than its predecessor, the Muse 2. It’s fabric, for one, instead of rigid plastic. The inside of the headband is lined with EEG contacts that roughly align with your forehead and ears. There’s also a small, detachable pod at the front of the band that holds the optical heart rate sensor, battery, and all the other components. Aesthetically, it’s reminiscent of the headbands the shinobi in Naruto wear, if they were going with a high-tech pyjama vibe instead of an anime ninja one.

The physical product itself is nicely made, but don’t get me wrong: You look ridiculous wearing it. That said, the fabric is comfortable to wear for longer sessions – even for a whole night, which I did once after falling asleep with it on. I didn’t have any trouble attaching and detaching the pod, which connects via magnets. You also get an estimated 10 hours of battery life, so unless you’re logging marathon meditation sessions, you shouldn’t need to charge often. I only had to juice up once over three weeks, though I mostly kept to 5-10 minute sessions, so your mileage may vary. 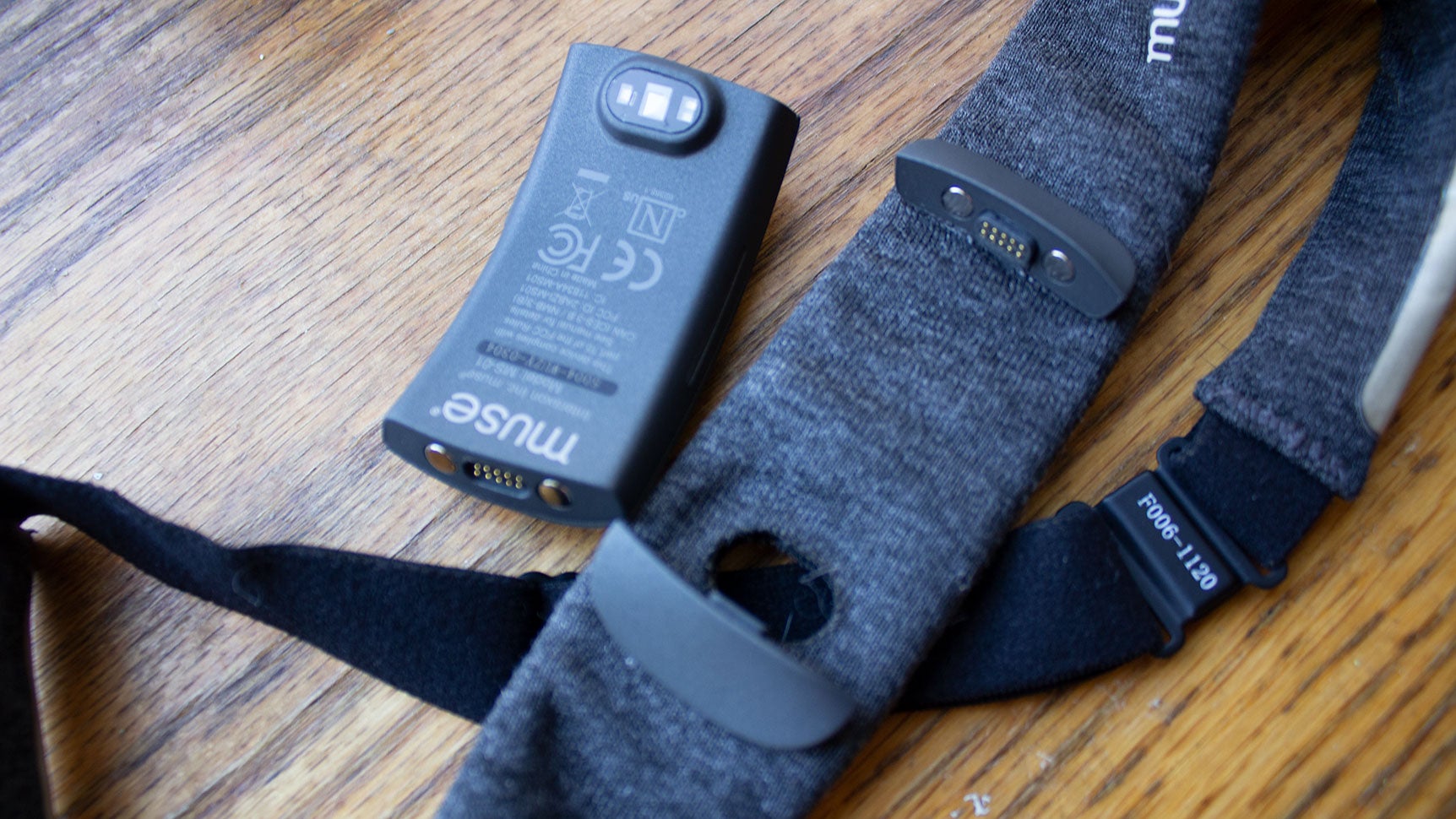 But while the headband itself was nice, I’m not sure that the overall quantified meditating experience worked for me the way it was supposed to.

Compared to more well-known, phone-only meditation apps, meditating with the Muse S has one main difference: real-time feedback. To start a session, you choose between one of several meditation types (mind, heart, body, breathing, guided, etc.), and you receive a set of audio instructions. While each of the types has its own focus, the common thread is listening to a calming soundscape. When the headband detects a lot of brain activity, your soundscape will change to reflect that – a gentle nudge to signify your mind has wandered. Likewise, when you’re calm, the soundscape will play some bird chirps to let you know you’re in a ‘calm’ state of mind. Subtle.

But this changes a bit depending on the meditation session you select. For instance, the heart-based meditation soundscapes are really into harmonic waves and drum beats that reflect your heart rate. The mind-based meditation uses rain – a calm brain results in a light drizzle, whereas an unsettled one triggers a rainstorm. The new Go-to-Sleep meditation sessions are longer, typically around 20 minutes, and have guided visualisations through an underwater island paradise and a field of lavender. After your selected session is done, you can review charts of how meditative your meditation was based on metrics like how many times you got distracted and how many birds noises you got. Those unlock achievements.

I get why Muse opts to do this. The whole pitch for wearing one of these headbands is you’re approaching something that’s quasi-spiritual with a more science-y, data-driven approach. If you’re going to measure brainwaves to give real-time feedback, you might as well stick it in a chart for self-quantifying nerds to pore over after. 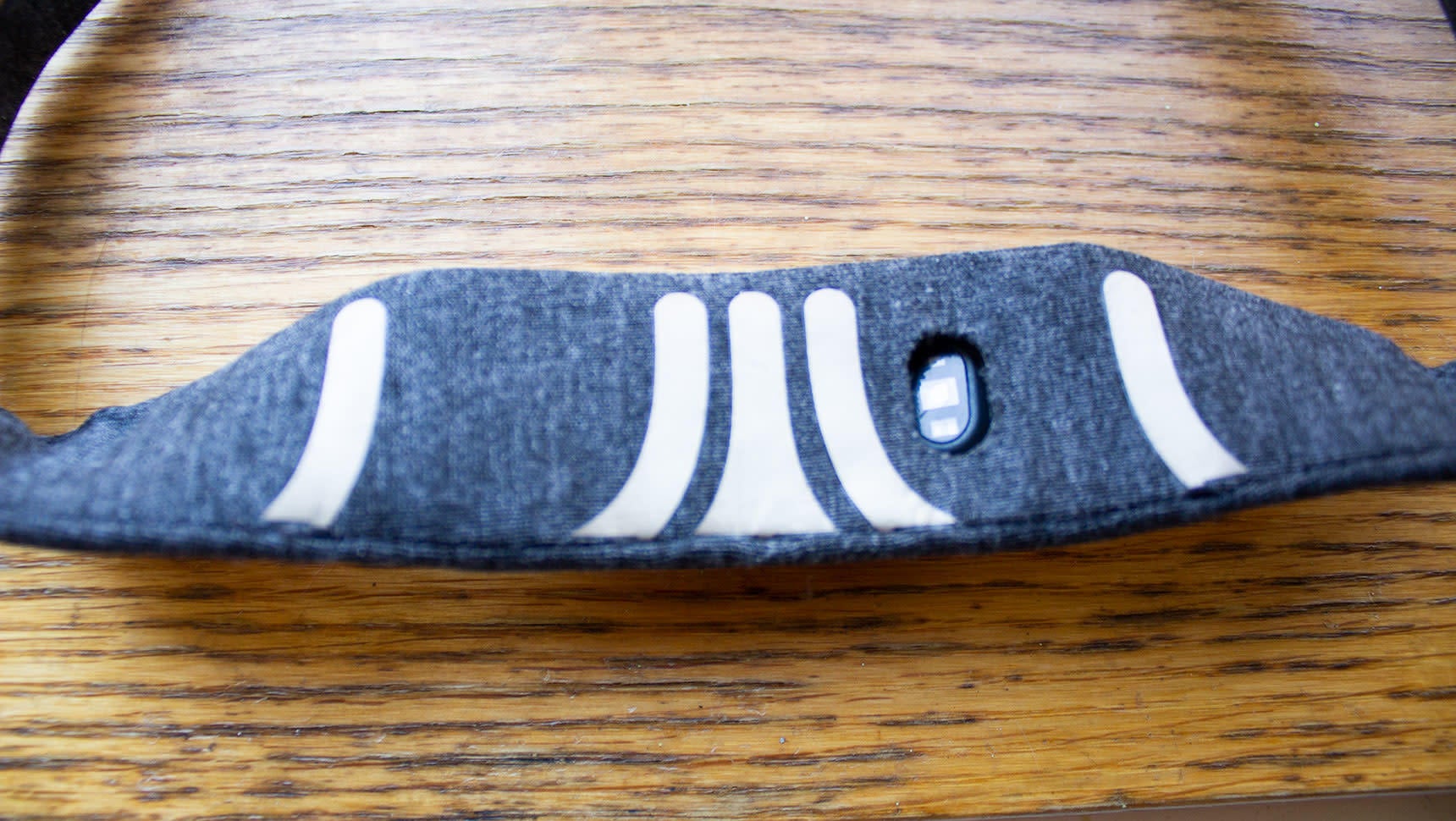 The EEG contacts that go on your forehead and the optical heart rate sensor. (Photo: Victoria Song /Gizmodo)

Initially, I thought this quantified approach would be the thing to cut through the bullshit and finally make meditating more palatable for me. In practice, I found it distracting. Perhaps my brain is truly, irrevocably broken, but it became a competitive game to see how often I could get the birds to chirp. It made me more agitated whenever the rain sounds got heavier. It wasn’t a conscious thing I was doing – just something I noticed I was doing after several sessions. (Maybe I’m one of those people who gets freaked out by meditation.)

That’s not to say the Muse S didn’t help me focus at all. It kind of did! There were times when it helped me fall asleep when my insomnia was acting up, or helped me refocus when I couldn’t seem to get words on the page. There were also times where the gamification triggered my admittedly specific neurosis and left me more strung out than I wanted. This might not be true for everyone, though – meditation is an incredibly personal thing. What works for one person may not ever work for another. I suspect that while on paper the Muse S should have been up my alley, I might just not be someone who finds inner calm from the sit-cross-legged-and-breathe type of meditation.

The real question is: How does the £330 Muse S compare to the sea of way more affordable mindfulness apps out there? To test that, I re-downloaded the Calm app at the same time to see how the Muse experience stacked up. Truthfully, beyond bird chirps and graphs, you’re not getting anything super different. Calm and Headspace focus more on guided meditation, so if you really hate people speaking softly about breathing and paying attention to your breath in your body, then, yes, Muse might be marginally better. You still have to listen to instructions (which you can skip), but most of the sessions are ‘quiet’ soundscapes. That said, there are plenty of chattier Muse sessions – particularly in the Go-to-Sleep journeys. 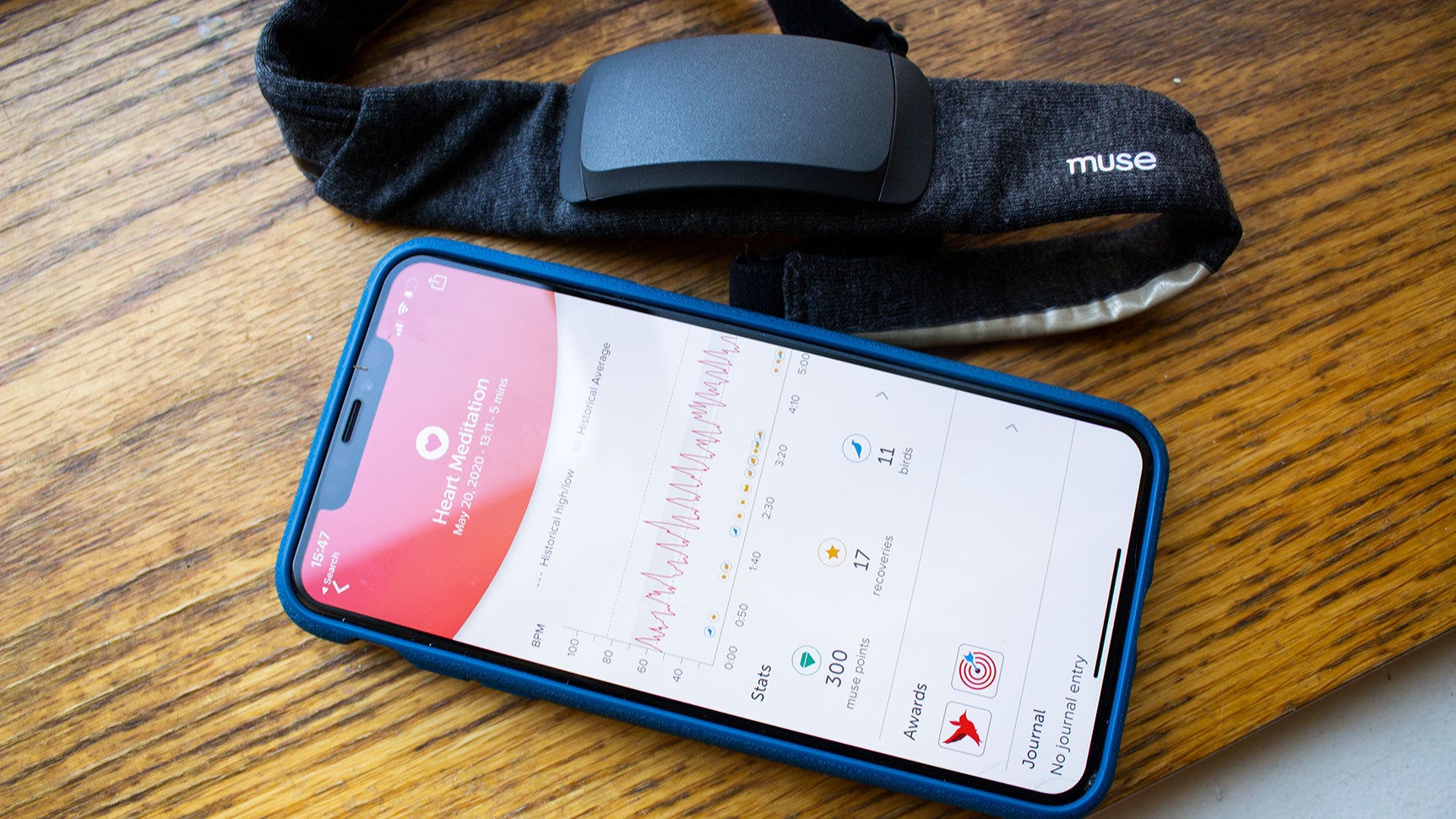 The heart meditation said I’d eventually be able to control my heart rate with my mind. I call bullshit. (Photo: Victoria Song/Gizmodo)

But, again, the Muse S is a whopping £330! Sure, you get hardware, but the app itself, while functional, isn’t quite as slick as Calm or Headspace. The headband is nicely constructed, but when I was holding it in my hands, meditating on the the idea of paying £330 for it, I balked. Eventually, all hardware is finite. Say, unlike me, you absolutely fall in love with quantified meditation – eventually you’re going to have to reach back into your pockets to pay another couple hundred for whatever comes out next from Muse. Another bummer? That price tag is prohibitively expensive if, like me, you wanted to experiment with a new type of meditative experience without committing.

Annual subscriptions to meditation apps are much more affordable. Calm is £64 per year, or £400 for a lifetime subscription. Headspace is £75 per year, and offers student and family discounts. YouTube meditation channels are free! Nothing is more portable and inexpensive than the YouTube app on your smartphone.

This isn’t to say the Muse S is a ‘bad’ product. I really do think some folks will dig it and find immense value from it. If you’re not strapped for cash, and you’re already a fan of self-quantification and mindfulness, you might love it. I’m just not convinced it’s a great option for anyone who is starting to explore what does and doesn’t work for them when it comes to mindfulness. As for me, I hate meditating slightly less than I did before – but I am stingy and will probably stick to the occasional YouTube guided meditation for whenever the mood strikes. Sadly, I may just forever be the type of person who finds nirvana at the bottom of an ice cream pint.