This Ugly Cyberpunk Clubbing Suit, as Analysed by a Former Cybergoth

Covid-19 has us thinking a lot about or daily interactions, how to keep us and our loved ones safe and how we will be able to interact physically in the future. Zoom isn’t exactly an adequate substitute for social interaction, and large gatherings will continue to be discouraged for some time. That hasn’t stopped Production Club, the company behind Skrillex’s touring production, The Cell, from developing a (patent pending) high-tech, full-body cybersuit so we can “safely socialise in times of a pandemic.” Specifically at a club. While it certainly looks safe for clubbing, the Micrashell also clearly has problems. As a qualified cybergoth with 10 years of experience, I feel uniquely qualified to point out the myriad of problems with Production Club’s sweat-maker.

This Cyberpunk 2077 and Breaking Bad mash-up suit might be air-tight, with a medical-grade filter in the helmet, “tactical, high performance cut resistant fabric,” and out-fitted with a bunch of social features. But eye-fucking someone across the dance floor is not nearly as sexy when you’re wearing a hazmat helmet! Even if you aren’t in the mood to flirt, the Micrashell doesn’t have the practicality of putting on a spiked respirator mask painted with hazmat icons on the filter caps – or of electrical tape covering your nipples. Dancing head to toe in a full body suit is going to get sweaty, very sweaty. The wrong kind of sweaty.

The ‘fashion accessories’ on the Micrashell suit are limited to an accessible NFC pouch (which is more like a 90s belt bag strapped to your chest) and “quick attachment features” all over the suit so you can place patches, velcro, magnets, hooks, and the collected works of Neal Stephenson all over your body. But a cybergoth wearing clothing made of cotton, polyester, or PVC fabric, doesn’t need patches to flair-up their outfit. We have enough flair thanks to personality...and a wide range texture applied to our clothing.

The Micrashell has RGB lighting strips, you say? Who needs RGB lighting when you have a full head of neon-coloured plastic tubes that glow under the club lighting? It’s just as effective, and cheap! 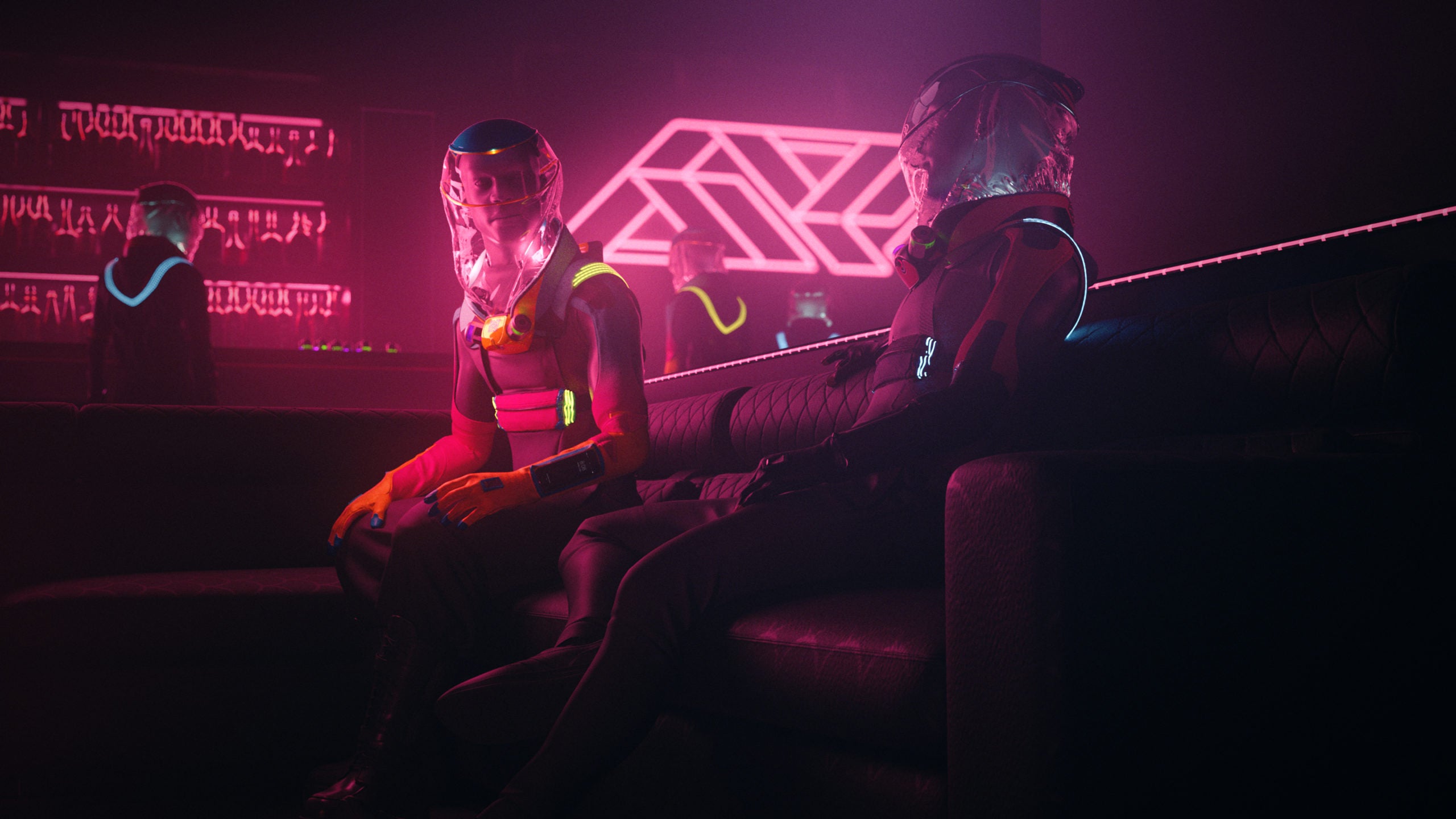 Sorry, but this does not look like fun. (Image: Production Club)

The Micrashell has an “emotion broadcast lighting system” that can tell people what your mood is before they approach you? You know what’s easier than taking the time to learn and program an entire new system of LED lighting patterns? Showing off your middle finger. That’s how I usually got the creepers to leave me alone at Das Bunker.

But what about the Micrashell’s voice communication system? You can set user-defined rules for social interaction based on “physical proximity and orientation.” You can let everyone talk to you or only a specific list of people, like the friends you went with to the club. While that does sound like a great way to mute the creepy guy who’s been trying to hit on you all night, flipping the bird is more direct, and gets the message across without any misinterpretation. Besides what happens if the communication system malfunctions? If you think shouting directly into someone’s ear over a deafening bass beat was hard enough through a mask, try doing it through a helmet.

Okay, let’s talk about the Micrashell’s “supply system”. There’s a bright, neon yellow port in the front where you can attach special canisters filled with different drinks, or even vape juice! Tubes inside of your helmet attach to the main unit so you don’t have to worry about removing your helmet. Also, Production Club says this is a safer way to drink alcohol because “this system removes the possibility of being roofied as the drink remains enclosed inside of a custom canister.”

First, that’s just a beer helmet attached to your neck. Second of all, a VAPE CANISTER. I mean, I guess if you’re going to smoke it’s better to breath it out inside your helmet and into your own face than into someone else’s but would not recommend doing that while dancing. Sounds like a great way to pass out. Third, sometimes clubs serve food. I don’t see a way for someone to eat without removing their helmet.

How about the Micrashell’s camera? It has a neat feature that adds an extra POV camera that connects with your phone through an app, so you can quickly take pictures and videos. No. Major red flag. The Micrashell has a phone pouch on the left forearm to store your phone and access it without touching it, but since the suit comes with an extra POV camera that connects to it, some club creeper could easily take inappropriate pictures of people without their knowledge since they don’t have to hold their phone up.

The future of clubbing doesn’t need to be so complex and dramatic. Just do as the cybergoths do: strap on a mask. Also, carry sanitiser, don’t have sex in grungy toilets, and just be smart about the things (and people) you touch. We don’t know what life will look like post covid-19, but something as dramatic as a full body suit is something better left for fiction novels. (Also, why make a suit with easy accessibility for having sex if the whole point of the Micrashell is to keep you safe from infection? Is there some weird, Demolition Man shit going on with this suit that we don’t know about yet?)

I know the cybergoth look is ridiculous to some people, combining goth, rivethead, and raver fashions like oh my god just pick one! But let me be clear, the cybergoth way is far superior to this full-body suit when trying to club in a post-pandemic world. I was wearing plastic, sci-fi Soviet-lookalike masks long before people started wearing face masks to do their daily shopping. Were they functioning masks? Hell no! But they could be modified into functioning masks. The dancing is also more social distance friendly, if, admittedly, strange and aggressive. Standing six feet away from someone else on the dance floor is common sense if you don’t want to get kicked in the shins or punched in the face.