If you’re worried about losing the respect of your co-workers with a collection of die-cast miniature Batmobile toys parked on your desk, don’t worry, Swarovski’s got your back. This £350 crystal Batmobile replica is described as a totally acceptable and normal “decoration object” on the Swarovski website and is definitely not a toy.

In recent years, Swarovski has gone overboard with its crystal creations, turning everything from Frozen characters to superheroes into collectibles that look like precious gemstones with a faceted finish that emulates the shape and appearance of diamonds and sapphires. This six-inch Batmobile features over 473 facets in its design, including angular wheels that would probably have the caped crusader pulling over to puke just minutes after racing out of the Batcave. 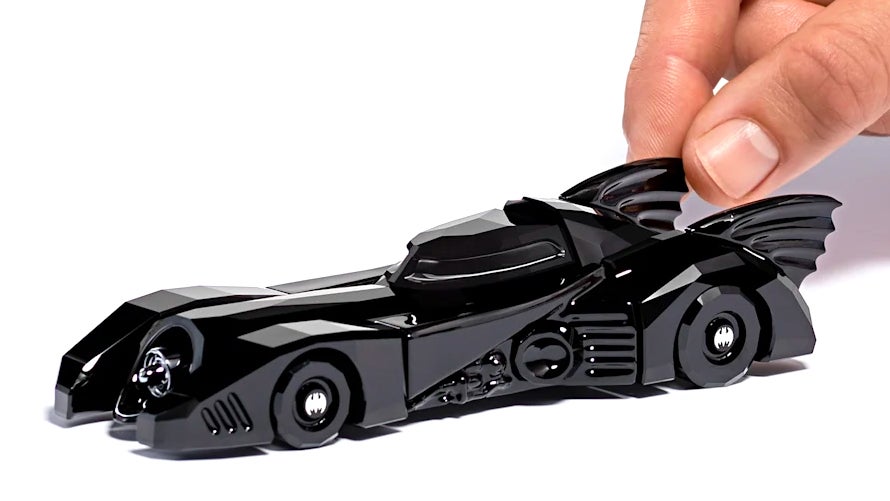 Although it’s roughly the size of a Hot Wheels toy, you’ll want to resist the urge to play with this Batmobile. (Photo: Swarovski)

As play-worthy as this collectible looks, you’ll want to resist the urge to drive it around your desk as it will not survive a run in with the Joker, the Penguin, or a fall of anything higher than an inch. The Swarovski website also points out that this item is “not suitable for children under 15” because, of course, 16 is the exact age when teens learn to responsibly take care of cars.

But the £350 crystal Batmobile isn’t the most lavish Batvehicle that Swarovski offers. That honour goes to this £6,500 10-inch Batmobile replica covered in over 16,000 individual crystals, giving it a sparkling look that will certainly help Batman slip through the night undetected. Just 200 of these are being made so you’ll want to act fast because there are undoubtedly lots of Batfans lining up to grab one of these for their collections instead of buying a new car, or taking a dent out of their student loans.