By Carlos Zahumenszky on at

The Lanmodo Night Vision system won’t turn your car into the Batmobile, but it definitely has that halo of techno-magic worthy of a Batman comic. It’s a night vision system in colour for your car. It literally turns night into day and is so easy to use that you don’t even have to professionally install it. Which is great, because it’s awfully expensive for what you get.

Germany, which is where I live, is very aware of light pollution and a big energy saver – which is a nice way of saying its motorways are very, very dark. Even the motorways with a significant amount of traffic aren't lit up. When you go from one town to another you depend on your car lights, and sometimes that’s not enough. So you can see why the Lanmodo Night Vision system was awfully appealing to me.

What is it?: It's a night vision system for the car that lets you drive even in total darkness.

Like: So easy to install and use that it's essentially plug and play. Image quality is really good.

The Lanmodo Night Vision system is a gadget the size of a rearview mirror, but instead of having a mirror, it has an 8.2-inch Full HD screen. On the other side you’ll find a camera similar in size to a webcam. The camera is nested inside a swivel that allows you to reposition the lens to better frame the highway in front of you regardless of where you install it. A single OBD cable juts out of the back of the device.

In terms of controls, there are only seven buttons on the top (or on the bottom if you decide to install it on your windscreen like a rear view mirror substitute). At first, I was a bit disappointed at this simplicity, but over time I have to admit that it’s a win.

The rear camera sits on top of a swivel so that you can adjust its position. Despite the lens’ appearance, it doesn’t have a focus dial. (Photo: Carlos Zahumenszky/Gizmodo)

The accessories to install the Lanmodo Night Vision system in your car. (Photo: Carlos Zahumenszky/Gizmodo)

The OBD connection cables and the connection for a car cigarette lighter, if you prefer to plug it in that way. (Photo: Carlos Zahumenszky/Gizmodo)

The lighter adapter and its cord. (Photo: Carlos Zahumenszky/Gizmodo)

A close-up of the buttons to adjust the image on the screen. (Photo: Carlos Zahumenszky/Gizmodo)

Easy to use, easy to install

The installation is one of the best things about the Lanmodo Night Vision system. Normally, car accessories tend to require complex set-ups and possibly even a trip to a professional installer. However, you can install this like you would install a GPS system. Just plug and play. If you know about car electronics, you can pass the cable underneath the dashboard and connect it to the car’s OBD cable for a neat install. But it’s nice to have the option of just plugging it into the lighter outlet. You mount it either on the inside of your windshield with a suction cup or on the dashboard with a non-slip mat. Both accessories come in the box and work wonderfully.

The ease of the installation also extends to use. The moment you plug it in and turn on the car, the Lanmodo Night Vision system activates by itself. It recognises ambient light by itself and selects the best image mode automatically. The only time you really have to fiddle with set up is if you have it mounted on the windshield. In that case, you have to turn the image upside down, but it’s a 10-second process.

The top buttons, besides turning the system on and off, allow you to adjust the brightness and contrast on the screen and rotate the image depending on your installation choice. Another button lets you alternate between the front and the optional $100 rear camera. The model I tried didn’t have that accessory, so this button didn’t do anything for me.

The last button lets you toggle the image between black and white and colour. The Lanmodo Night Vision screen actually combines two images being captured by its camera. It gets the first image from a Sony MCCD sensor that magnifies the light, and the second image from an infrared sensor. When there’s little ambient light, the colour information can disappear and switching to infrared only might be preferable. 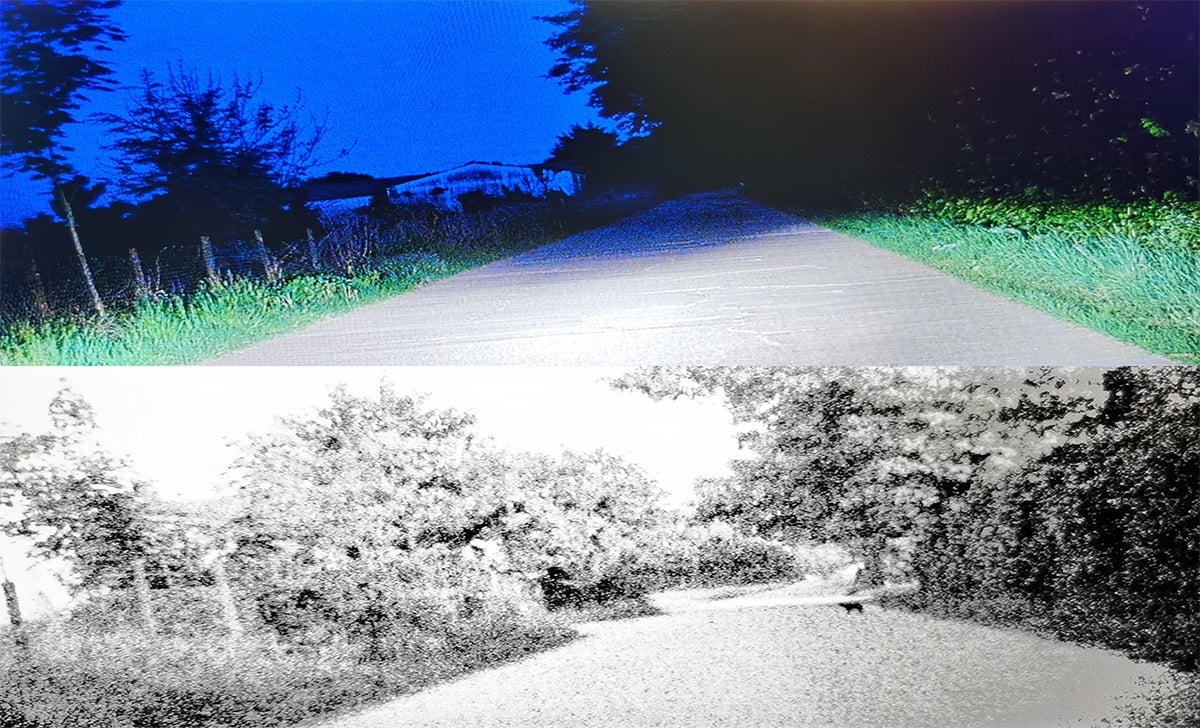 But the Lanmodo Night Vision will automatically switch to infrared only if it detects zero external light (say if you turn off your lights on a dark motorway). The image automatically changes to black and white and the Lanmodo Night Vision system trusts in the information that it receives from the infrared sensor. However, the infrared sensor doesn’t capture as high a resolution as the other, and image quality will drop from 1080p to 480p. But again, this only happens if you’re in the most absolute and complete darkness, without sources of external light and with the car lights off. I can think of very limited situations where this should happen in the real world. Unless you dedicate your time to hunting deer from your car you should be fine.

By day, the image quality is excellent and there’s no signal delay that could make it uncomfortable or dangerous to use. Driving while trying to use only the information on the screen is possible (at low speeds), but it is not advisable, and possibly not even legal in your state. Perhaps if you install it right in front of the steering wheel it could work, but don’t do that! Keep your eyes on the road please.

One interesting feature that I haven’t been able to try out yet due to the weather is its ability to improve visibility in thick fog or heavy rain. I’ll update this review the next time I get some rain.

This is what the system looks like when installed using your car cigarette lighter. (Photo: Carlos Zahumenszky/Gizmodo)

The perspective offered by the screen isn’t very useful if you want to drive using only the screen. Don’t trust in a tiny screen when you have a big view courtesy of your car's windscreen. (Photo: Carlos Zahumenszky/Gizmodo)

At night, the system offers an amazing amount of extra information over what my own eyes and headlights provide. It has a 36-degree viewing angle and reach of about 985 feet. In general, what it does is highlight the dark points on the road so I can better see animals or other objects outside the range of my headlights.

On streets with low lighting like this one, it allows you to drive without sticking your tyre into a place you’ll regret later. (Photo: Carlos Zahumenszky/Gizmodo)

The biggest inconvenience is that the lights from the cars going in the opposite direction tend to generate too much brightness on the screen. (Photo: Carlos Zahumenszky/Gizmodo)

On one of my test drives, I was driving slowly down a country road without lights when the screen showed a dark object moving towards the front of the car. It was a cat. I flipped on the lights and still couldn’t see it with my own eyes. I could only see that little buddy on the screen.

The only problem the system had when I used it at night was that the lights from the other cars are even more blinding on the screen, but you can greatly improve the situation by reducing the brightness.

The Lanmodo Night Vision system isn’t for everyone. If you always drive on well-lit streets and your car has good rear lights, you don’t need a system like this one. However, if your car is like mine (an old 2008 Ford Focus) or you live in a less than well-lit area you can probably get a lot of use out of it or something like it (similar gadgets can be found on Amazon or Aliexpress). The ideal users for this gadget are people who live in the country and frequently have to drive on streets with no light, or even on roads that aren’t even paved. If you’re a forest engineer or you have a farm, it’s very likely that the Lanmodo Night Vision system will change your driving life.

But at $500 (and $600 if you include the rear camera) it’s hard to justify the Lanmodo Night Vision system right now. It’s way too simple for the price! That simplicity is marvellous to avoid distractions while you drive, but I can’t help thinking that it could have a few more features to justify its price tag. It’s also due for an upgrade as later this year, Lanmodo will launch an Indiegogo Campaign for a new generation of its Night Vision System. We will get our hand on that new device so you can compare better between the two. But for now it’s probably a good idea to hold off – unless you really live in absolute darkness.

This review originally appeared in Gizmodo en Español. You can read it in Spanish here.