Aside from a couple USB port changes, you might not be able to tell the difference between Microsoft’s latest Surface Book and its past iterations. They look nearly identical side-by-side. Same keyboard layout. Chassis colour. The screen/tablet portion still disconnects from the base. Even the clamshell hinge still has that accordion-look to it. What mainly sets the Surface Book 3 apart from its predecessors is what’s under the hood, and in this case, it’s an Intel Core i7-1065G7 processor and Nvidia GTX 1660 Ti Max-Q graphics card – both current-gen parts and more than enough power to see you through your work day and then play some games once the clock hits 5 PM. It’s a dang fine machine, but it’s pricey, and most people probably won’t need or use all the versatility it offers.

It’s nice to see the Surface Book going strong. It’s got USB-C now! But in 2015 it was Microsoft’s first laptop and the company was looking for a way to shake off the stench of Windows 8 with its then recently released Windows 10, while still leaning into the tablet market. Tablets had good traction at the time, largely due to the iPad, but to see someone with a 2-in-1 wasn’t as common as Microsoft would have liked, and if they did have an iPad or a Surface they most likely had a keyboard attachment to go with it. Touch screen keyboard response times can’t match a good old regular keyboard.

Ergonomically, the major selling point then and now is that the Surface Book is still functionally a laptop (with decent hardware specs at that), but if you want or need to use it as a tablet you can. As someone who has traditionally shunned tablets because I hate typing on them (and no way in hell do I want to spend more money for a separate keyboard), the Surface Book 3 is surprising! I still made lots of typos since there are no physical keys to help guide my finger placement, but as long as I looked at the keyboard I could type almost as fast. I didn’t even mind I was paying more than I would from most other tablets (even factoring in the additional cost of a keyboard case).

What is it?: Microsoft's third-generation Surface Book with upgraded hardware

Don't Like: Price for specs, no stylist pen, screen ratio can distort games

The Surface Book 3 is offered in both 13.5 and 15-inch versions. The 13.5-inch version has a 3000 x 2000 resolution display with 267 PPI and starts at £1,600, and the 15-inch version has a 3240 x 2160 resolution display with a slight drop to 260 PPI and starts at £2,200. Microsoft sent me the 15-inch one and its larger screen gives the touchscreen keyboard more room than any normal tablet could. The keys on the keyboard are a bit larger too. It makes for a far better experience than a Surface Pro or something of that ilk, but what was really surprising was how often I found myself using it in tablet mode despite liking it precisely because its a good, if expensive, laptop. The touchscreen keyboard sits lower on the tablet than the physical keyboard sits on the base, so I found it more comfortable to type on the touchscreen than the physical keyboard when at my desk.

There’s nothing wrong with the physical keyboard, I just wish the keys were slightly larger and similar in size to the touchscreen keyboard. If you’ve used a Surface Book in the past you’ll probably notice that the physical keyboard design hasn’t really changed. I can’t personally attest to the feel of the keys on the previous models, but the keys on the Surface Book 3 feel light under my fingertips, and quiet too. 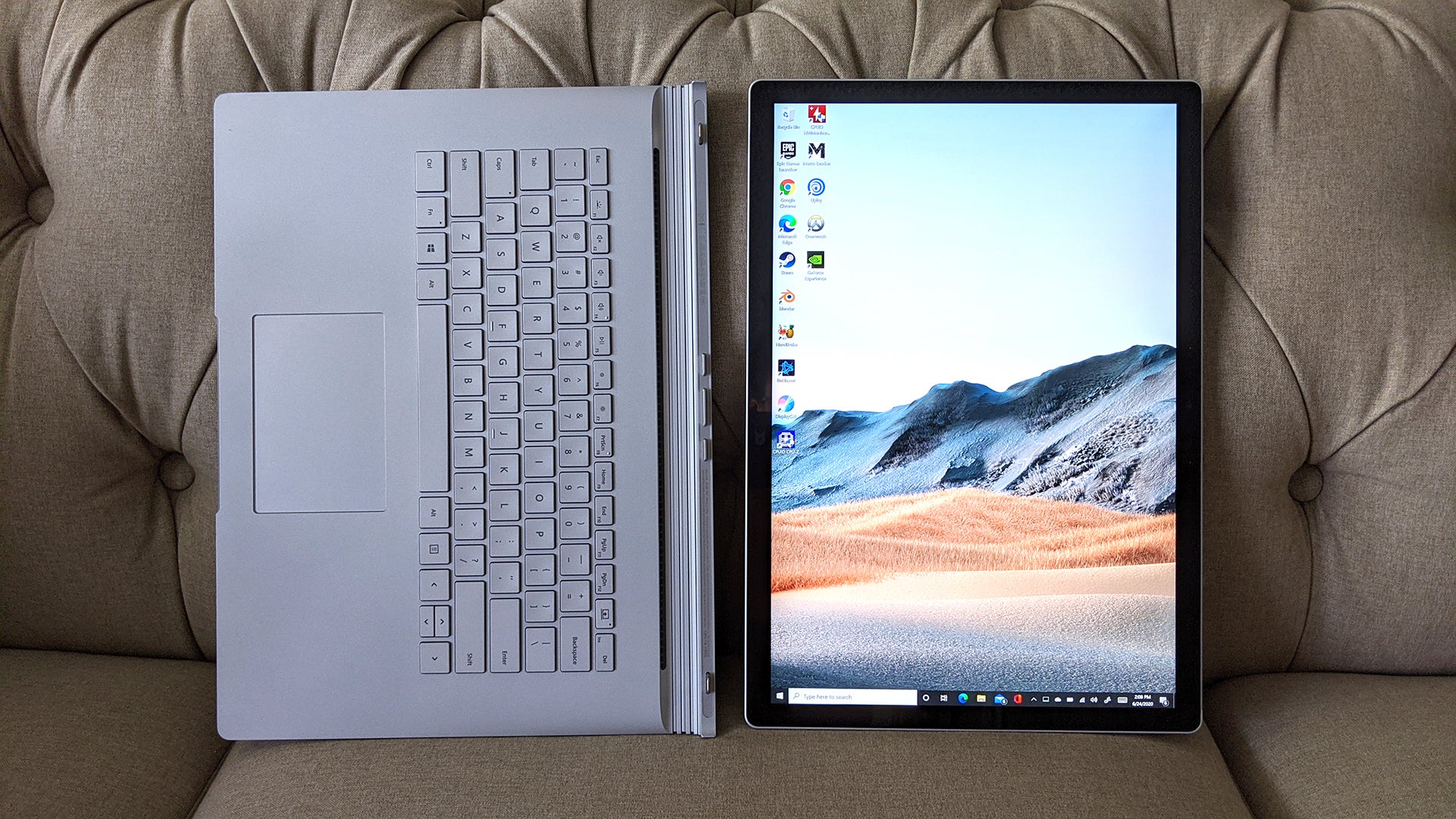 You still disconnect the tablet from the keyboard base the same way, too: with the push of a button in the top right-hand corner of the keyboard. You’ll hear a click, and then a message will pop up on the screen letting you know when its safe to remove the tablet. I tried to think of scenarios where I or someone else might prefer to use the Surface Book 3 in tablet mode, and I did come up with a lot, but the most useful way for me, someone who isn’t into art or design, would be as a digital notebook. Unfortunately, I couldn’t test that out because the pen comes separately (for £100), and would I want to spend all that money to mainly use the tablet as a notepad? I would not!

Due to the specs, I would get more use out of it gaming, but gaming on the Surface Book 3 is strange because of the screen ratio. Normally, a gaming laptop or desktop monitor has a 16:9 ratio, but the Surface Book 3 has the same 3:2 ratio as its previous versions. So depending on what resolution settings your game offers, the visuals will either be slightly elongated, like a funhouse mirror, or put a letterbox format with black, blank spaces above and below the game visuals, even if you have the full screen setting enabled. (It does this with the desktop settings, too.) Playing a game like Overwatch with either setting messed with my ability to focus on what was happening on screen at times.

But if you’re not bothered by that, then you’ll probably like the performance this thing puts out. In most games at 1080p, you can drop the graphics to high and get a respectable 60 frames per second. Shadow of the Tomb Raider on the highest graphical setting got an average of 57 fps, and Far Cry 5 on ultra averaged 67 fps. The more graphically demanding games, like Metro Exodus, will take a drop to medium graphics setting or lower to get at least 60 fps; Metro Exodus averaged 34 fps on ultra, which is not all that surprising considering that game needs more than a GTX 1660 Ti Max-Q GPU to take full advantage of all it offers.

CPU-intensive games and tasks are a different story with the Surface Book 3. The Intel Core i7-1065G7 is good, but it struggled with our Blender and Handbrake tests. Rendering a 3D image in Blender with the CPU took over 25 minutes, and just over 27 minutes with the GPU. Transcoding a 4K video to 1080p at 30 fps took just over 23 minutes. And while CPU turn-time in Civilization VI was just 8 seconds and average fps was 65-70 on 1080p ultra, Total War: Warhammer II fared an average of 47 fps at the same resolution and graphical settings.

So performance is good...but it’s not the reason you should buy the Surface Book 3. I understand the niche appeal of a laptop that can turn into a tablet at the press of a button. Yet the £2,700 price on this configuration is incredibly bold when you take into account the performance and specs. Yeah, you don’t have the convenience of removing the screen off something like the MSI GS66 Stealth, but if you’re the kind of person who values cost versus performance, a gaming laptop is almost always going to get you a better deal. But if you like the Surface Book 3's versatility and damn-good battery life (11 hours in our test), spending a few extra hundred quid might be worth it. You can even sacrifice some RAM and storage space, while keeping the 15-inch screen, processor, and graphics card, to lower the price down to £2,200.

The Surface Book 3 is great for light gaming and light creative work, but I’d look elsewhere if high performance gaming or serious video editing work is what you’re after. (You’re going to need lots of storage space for all that, too.) If you just need something to check emails or maybe work on that novel of yours, the £1,600 base 13-inch model would do nicely, but an even less-expensive, less-versatile laptop might be more your speed.