Google may have been one of the first companies to the smartwatch scene, but its Wear OS platform has so far been a journey of unfulfilled potential. For a long time, that was partly because most Wear OS watches were running on outdated hardware: the Qualcomm Snapdragon Wear 2100 chip. That was supposed to change in 2018, when Qualcomm introduced the Snapdragon Wear 3100. But that change was incremental. Fast forward another two years: Qualcomm is introducing its latest wearables SoC (system on a chip), the Snapdragon Wear 4100+ and 4100.

With the 4100+, Qualcomm is sticking with the hybrid architecture it introduced with the 3100: namely a primary SoC for running what it dubs “interactive” experiences and a smaller QCC1110 co-processor to handle ambient, always-on features. That said, Qualcomm is giving its flagship wearable SoC a much-needed spec boost. The 4100+ is 12nm compared to the 28nm 3100, and features four A53 CPUs, an upgrade from the 3100's A7s. It also has two DSPs to the 3100's single DSP. One DSP is dedicated to modem and location functions, while the other is for sensors and audio. The 4100+ also now supports Bluetooth 5.0, 4G LTE connectivity, and includes a bump up to a 750MHz LPDDR3 from the 400MHz used by the 3100.

These spec boosts to the main SoC are important, even if they may not be the most impressive. The jump from the Snapdragon Wear 2100 to the 3100 turned Wear OS watches was a noticeable improvement in performance. Qualcomm’s also boosting the co-processor, which hopefully means we’ll see another noticeable jump in performance from the 3100 to the 4100.

The base 4100 chip includes the main SoC but leaves out the co-processor. Of the two, Qualcomm says the 4100+ chip is meant to be the “premium” version. The 4100 is designed to be used in situations where the co-processor isn’t necessary, or if a vendor wants to supply their own co-processor.

According to Qualcomm, these upgrades should translate to 85% faster performance from the 3100, plus 25% more battery life. The new chip should deliver smoother app launches, a more responsive interface, and advanced features like voice assistant capability should be less laggy.

All this sounds great on paper, but forgive me for being mildly sceptical. After all, Qualcomm made similar promises in 2018 with the 3100 and the results were middling, at best. 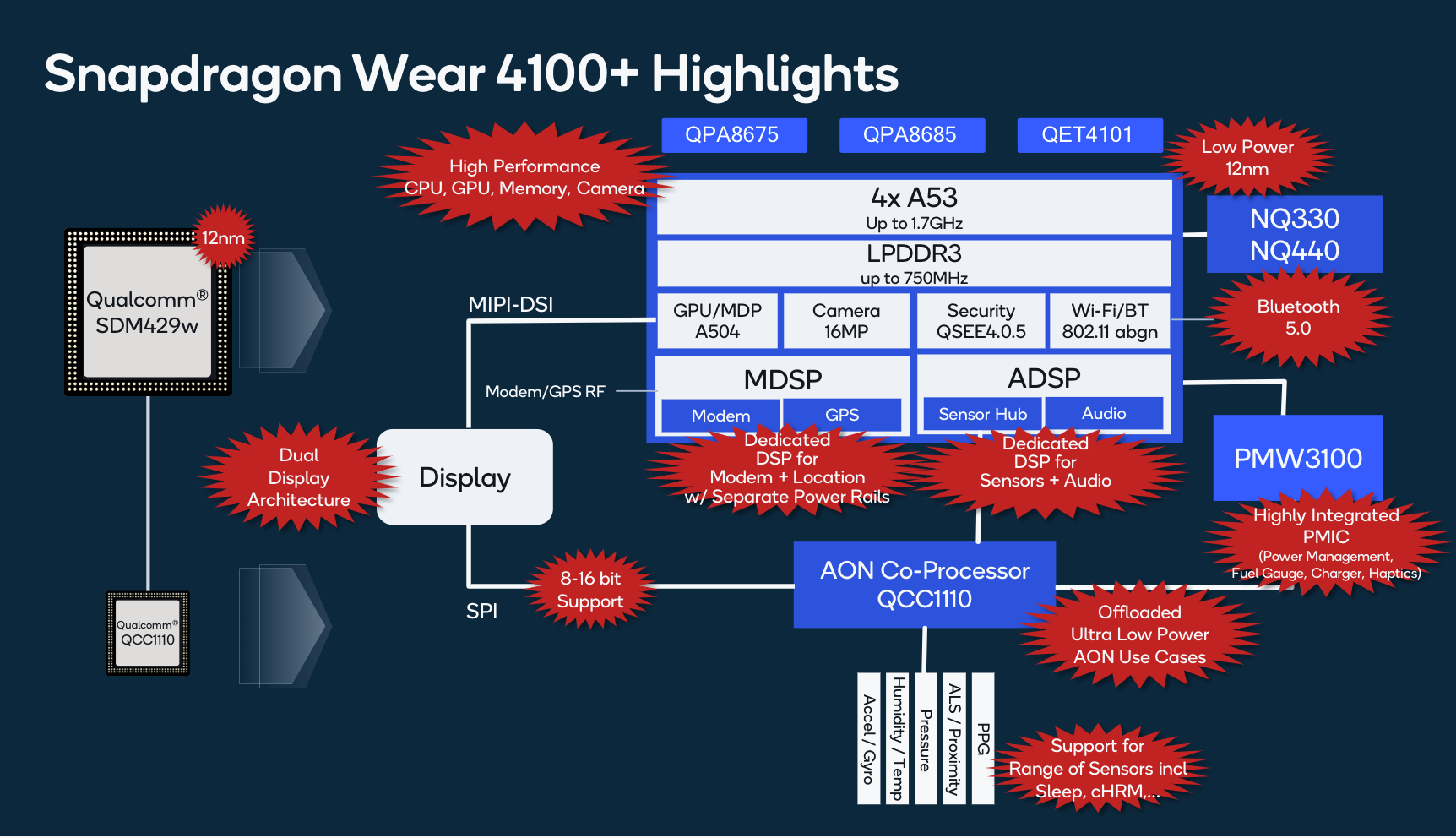 Part of the disappointment with the 3100 was it relied on a 28nm process node. In 2018, Apple, Samsung, and, heck, even Qualcomm were all capable of producing SoCs using 7nm and 10nm process technology. It’s not clear why Qualcomm opted to stick with 28nm, but it meant this “new” chipset was outdated before it even launched. When the first 3100-powered watches arrived, the experience felt anticlimactic. Yes, most 3100 watches were faster than their predecessors, and they didn’t die after 8-10 hours. But the watches were still slow and buggy compared to Apple or Samsung’s offerings, and died after about 18 hours. The bar was so low that any improvement was welcome, but it still fell short of making Wear OS truly competitive. Aside from the Suunto 7, none of the 3100-powered Wear OS watches I’ve tested have offered anything that wasn’t already done better by the Apple Watch, one of Samsung’s Galaxy smartwatches, or even some fitness trackers. Looking at the updates to the 4100+, you can’t help but sense that history may be repeating itself.

Going from 28nm to 12nm will translate to snappier watches, but 12nm still isn’t the latest process tech Qualcomm could be using here. Plus, faster performance alone is not going to magically erase the gap between Wear OS watches and rivals on other platforms. For context, Apple and Samsung added some of the features supposedly enabled by the 4100+ two years ago with the Series 4 and Galaxy Watch. We’re expecting to see a Series 6 from Apple this autumn, and we’ve already seen some leaks of the rumoured Galaxy Watch 3 from Samsung – it’s likely that both will offer new features that go beyond “better performance and battery life.”

Ultimately, we’ll have to see what companies do with the 4100+, and if it’ll enable Google to add more advanced updates to Wear OS itself. But despite today’s announcement, it could be a while before watches running on 4100+ are widely available. Qualcomm says the first watches featuring the chipset will be the BBK Z6 and the next-gen Mobvoi TicWatch Pro. No time frame was given on the new TicWatch Pro release date, and the BBK Z6 will likely be a China-only smartwatch for kids. It’s unclear at the moment whether Fossil’s autumn lineup will feature the 4100+ chipset. Last time around, Fossil put out just one watch, the Fossil Sport, to start with the 3100 after the chip was available, waiting until the following year to add the 3100 to its flagship Gen 5 watches.

As for whether we can expect to see more frequent hardware updates from Qualcomm going forward, well, don’t get too excited. Pankaj Kedia, Qualcomm’s senior director and business lead for wearables, demurred when asked in a press briefing. Instead, Kedia pointed to the range of existing Snapdragon Wear chips available for vendors across the 4100+, 3100, and 2100 platforms. That’s corporate speak for “not likely.”

To be fair, the 4100+ is a step forward for Wear OS. It just might not necessarily be a big one. But if Qualcomm’s hardware can’t keep up with the competition in a more timely manner, Wear OS is forever going to be playing catch-up.