Sonos Arc Review: A Neat Way to Get Dolby Atmos in Tiny Spaces

I’ve always wanted a cool home cinema setup, but two things have held me back. First, I rarely have several hundreds of pounds lying around. Second, for most of my adult life, I have shuffled from one teeny tiny flat to the next – I’m not trying to pile on the clutter! So I was intrigued by the Sonos Arc – the company’s latest soundbar which finally includes Dolby Atmos support.

There are plenty of surround sound formats, but Dolby Atmos is cool because it adds height channels to create a more 3D immersive sound. In a home cinema context, the promise is it will give you a more all-encompassing sound stage than stereo speakers or soundbars. It does require a bit of effort – all your hardware and the content itself has to support Atmos for it to work.

At £800, the Arc isn’t exactly cheap but when I talked to Sonos right before the soundbar launched, the company seemed pretty confident that the Arc could deliver quality surround sound all on its own. That’s a tall order for a single soundbar, especially when it comes to Dolby Atmos. Still, it’s not an unheard of claim. TCL showed off its Ray-Danz soundbar at IFA 2019 and its curvy design was meant to give you Dolby Atmos sound without the need for satellite speakers. Sennheiser’s Ambeo Soundbar also did a decent job at it in our testing, but, at £2,200, costs more than three times the Arc.

What is it?: Sonos's Dolby Atmos compatible soundbar

Like: Does a decent job on its own. Easy setup. Low profile. Good sound quality.

If you’re just comparing specs, there’s a few things the Ambeo Soundbar and the Arc have in common. They both pack in a lot of drivers into a single soundbar – the Ambeo has 13, whereas the Arc has 11. The Ambeo’s got six woofers, five tweeters, and two mid-range upward firing drivers. Meanwhile, the Arc has three tweeters (one in the centre and two on the sides), and eight elliptical woofers, two of which are upward firing. They’re also fairly large devices. The Ambeo measures 50 inches long to the Arc’s 45 inches.

But the Sennheiser uses the eARC port, which isn’t something that necessarily every TV has yet. The Sonos connects via the more common ARC port (though it also is compatible with eARC). Meanwhile, the Ambeo is limited to Chromecast and Bluetooth for music, but the Sonos Arc can easily double as a smart speaker and supports Alexa, Google Assistant, and Apple AirPlay 2. (Note: Beyond testing that I could get Google Assistant working on the Arc, I didn’t play around with this feature too much. I’m not looking for more microphones in my apartment on top of the ones I already have.)

These similarities – and differences – made a compelling case that perhaps the Arc could do a decent job of delivering surround sound from a single soundbar. That largely bore out in testing, with a few caveats.

To test how well the Arc worked with Atmos, I watched a bunch of action flicks full of zooming cars and nyooming spaceships. I could clearly hear cars skidding in various directions during the chase scenes in Baby Driver. During a scene where several characters were negotiating across a big parking lot, I could actually hear who was farther away and who was up close. But while left-and-right spatial sounds were crisp and clear, the Arc wasn’t quite as good with sounds coming from overhead. I’m not saying it did poorly. In Star Wars: The Force Awakens, I could hear the First Order ships were somewhere higher than me as Rey and Finn were trying to escape Jakku. There was an impressive bit where the Millennium Falcon swoops down from the sky, forward toward the viewer, and then back off into the distance that the Arc handled really well. It’s just that the overhead sound wasn’t quite as clear as the forward-and-back sound. You’d most likely get better results from installing ceiling speakers – though again, that’s not possible for every living situation.

I also didn’t ever really feel like sound was coming from behind me. Which makes sense, given that I didn’t set up satellite speakers (Sonos has a modular approach to surround sound so you can add additional speakers to create a full 5.1 surround sound system). When you set up the Arc, Sonos has you go around your room, waving your phone slowly up and down as it pings sound to “tune” the soundbar to your room’s specific acoustics – a feature it calls TruePlay and is used with all of its latest speakers, though it requires an iOS device. Theoretically, that should have given me that ‘sound bubble’ experience Atmos is known for, regardless of where the Arc was in my room. It mostly did, but I’d say it was more like I was seated at the far edge of an elliptical bubble, instead of right in the centre of a circular one. 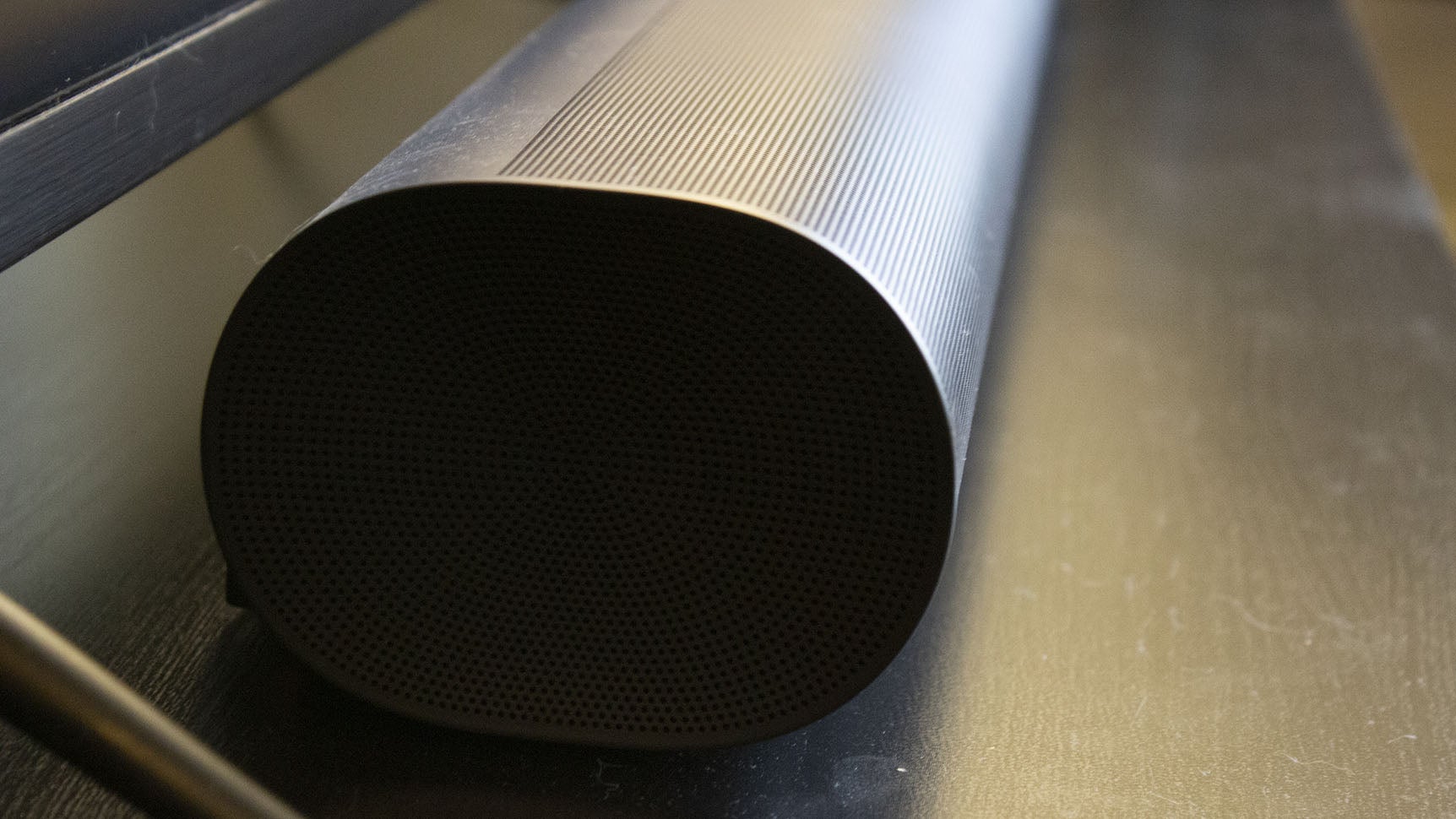 You can get a better sense of the c-shape from the sides than looking head on. So many holes. (Photo: Victoria Song/Gizmodo)

Still, it did a pretty good job in my sardine tin of a studio flat! For someone like me, who doesn’t have any space for an extra subwoofer or satellite speakers, this is probably the easiest, most space-efficient, Atmos-compatible ‘home cinema’ I could get. It’s not going to hold up to a system where someone has painstakingly placed speakers in the proper areas, but for a single device, it does a decent job.

If you do want to add extra speakers with the Arc, you can—so long as you’re using other Sonos speakers. The ease of setup and connectivity is one of Sonos’ major draws, but this is where it starts to get pricey. The refreshed Sonos Sub costs £700, while the new Sonos Five – which is replacing the Play: 5 – is £500 a pop. Meanwhile, Sonos One costs £200. If you wanted an all-Sonos home cinema setup, you’re looking at spending around £2,500 if you add speakers over time or £1,856 if you buy them as part of a bundled set.

As for non-Dolby Atmos content, the Arc holds its own. I have a hard time hearing dialogue on my TV’s native speakers, but I found I could finally turn off captions once I set up the Arc. Also, the Night Mode feature where the Arc lowers volume at night also came in handy as my apartment’s walls are not exactly soundproof. As for music – it’s a soundbar and probably wouldn’t satisfy audiophiles who really invest in their hardware. That said, the Arc isn’t too shabby. It handled the frenetic bass on Thundercat’s Uh Uh without sounding like a complete mess, though I’d say this isn’t a super bass-forward speaker overall. It’s also able to handle shifts from super quiet to super loud with aplomb. Gershwin’s Rhapsody in Blue and the chorus of Mitski’s Your Best American Girl can be trying for cheaper speakers – but both sounded great on the Arc. 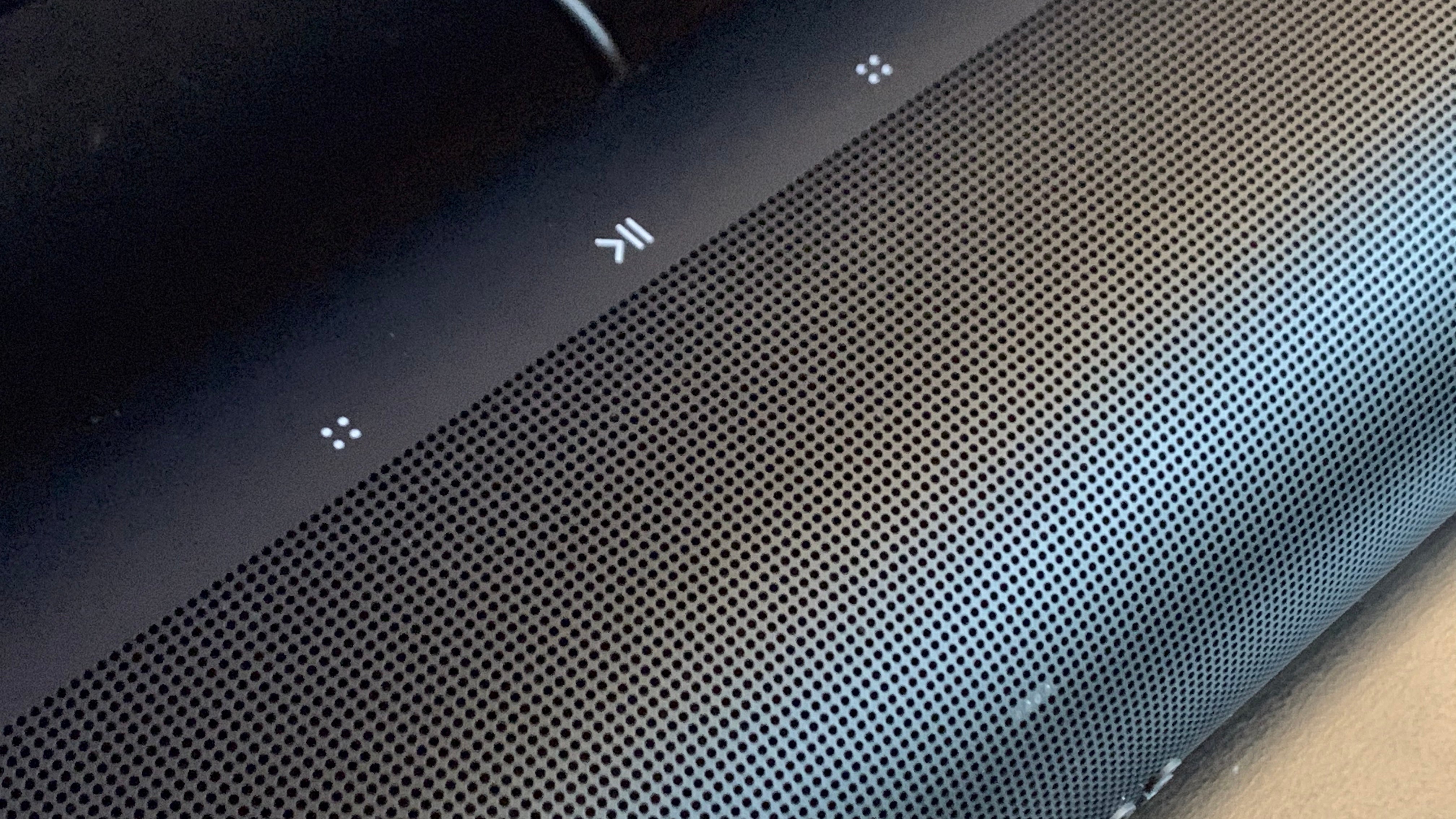 There are touch controls up top. You can also see the discreet LED that lets you know when it’s listening if you choose to use it as a smart speaker. (Photo: Victoria Song/Gizmodo)

While sound is the most important thing with regard to any type of speaker, Sonos does make some nice looking gadgets. The Arc isn’t boxy like most soundbars at all – it’s got a c-shaped, 270-degree grille with 76,000 holes in it. And even though it’s packing 11 drivers, it still maintains a decently low profile. On my console, it does overlap with the very bottom of my TV screen – but not to point where it obscures anything. I got the black version of the Arc for testing, so it kind of melted into my all-black furniture. Which, frankly, I prefer to it sticking out like a space-sucking sore thumb.

Another important thing to note about the Arc is that its part of a new wave of Sonos hardware that will use its forthcoming S2 app (the new Sonos Sub and Sonos Five speakers are included in this too). The app doesn’t officially launch until 8 June, so I tested the Arc with a beta version. It still functions similarly to the current Sonos app, albeit with a cleaner interface. The main updates here, according to Sonos, is that the new app will allow for better audio bandwidth and higher resolution formats – like, drumroll, Dolby Atmos. 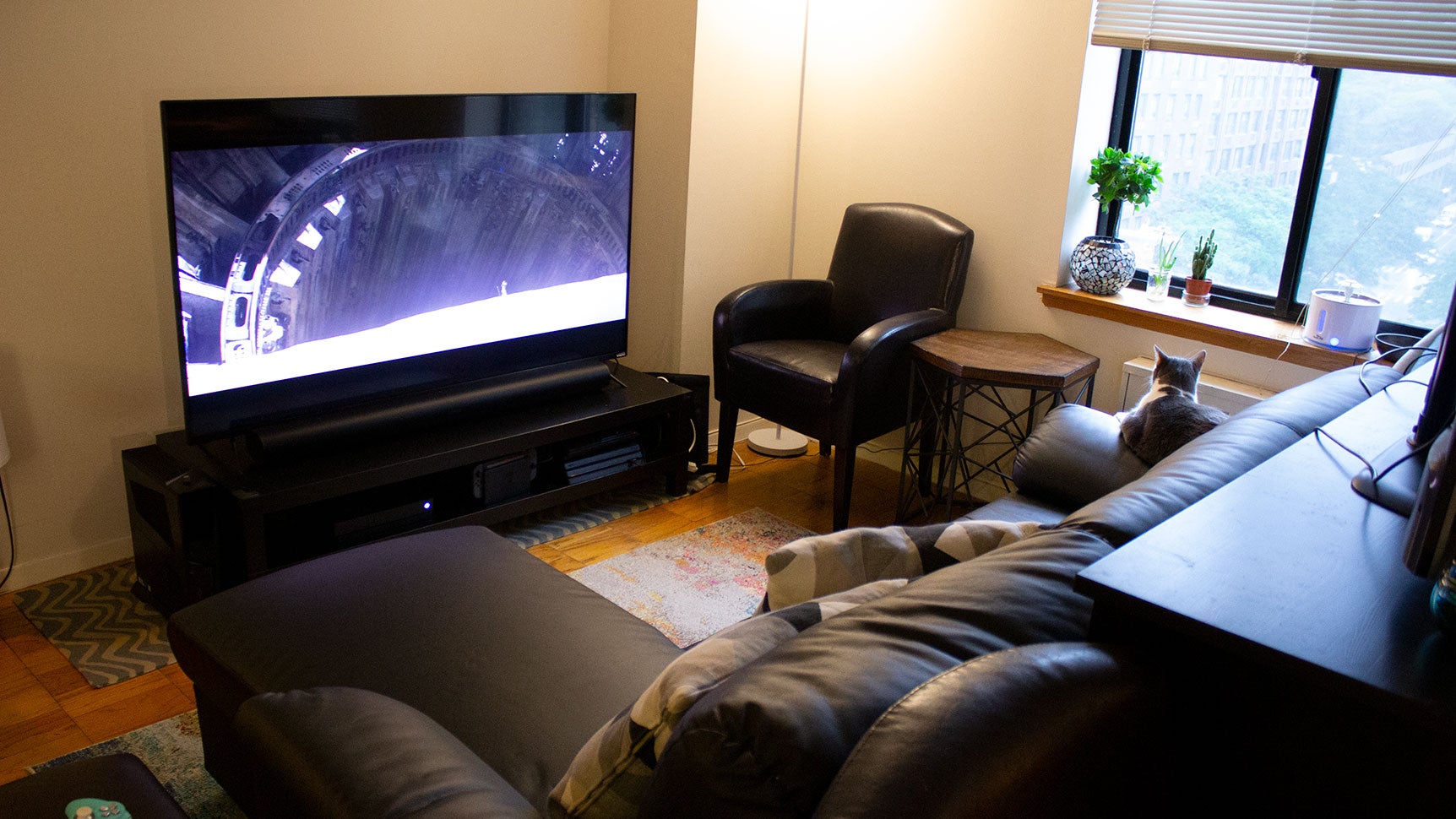 This is it. This is my closet-sized flat. The Sonos Arc does melt into my emo black decor. The low profile also means it’s not obscuring the screen. (Photo: Victoria Song/Gizmodo)

This is a consideration for people who want their home cinemas to last a long, long time. Sonos products don’t crap out on you after a year, but they are more vulnerable than “dumber” speakers when it comes to planned obsolescence – a thing Sonos had to deal with earlier this year when users clapped back at the company for sunsetting its older devices. Eventually, the Arc will also be obsolete in ways that other speakers won’t – though not for a long while yet.

So, is the Arc worth it? I’d say if you’re stuck in a smaller living space, or want that home cinema feel without all the extra speakers, then the £800 Arc is a decent bargain – if you want Dolby Atmos. But if you don’t particularly care about Atmos, or just want something better than your TV’s native speakers, there are soundbars out there that don't cost quite so much. There’s also the smaller, and Atmos-free £400 Sonos Beam. The Arc is for people who want to really improve their sound quickly and easily...and are willing to pay for it.