Over the last couple of years, it felt like Samsung’s laptop division has been coasting. That’s because none of its laptops were outright bad, but, aside from a couple Chromebooks, nothing really stood out either. A big part of Samsung’s laptop woes has been a lack of identity. But in 2020, one of Samsung’s goals was to double down on laptops, and after checking out the new Galaxy Book Flex, it feels like Samsung has some done soul searching and finally figured out a simple but winning formula. Combine a great screen with a slick design, solid specs, and a bit of Samsung expertise, and voila, Samsung has created its best laptop in years.

Priced at £1,350, the 13-inch Galaxy Book Flex is the slightly more premium sibling to the $1,000 (£800) Galaxy Chromebook. Both systems sport similar designs including a sleek, aluminium chassis with sharp, hard-edged lines, bold anodised finishes, and a built-in S Pen. The main difference is that the Galaxy Book Flex comes in an enchanting shade of blue (instead of red or grey for the Galaxy Chromebook) and it runs Windows 10 instead of Chrome OS.

What is it?: An ultraportable 2-in-1 with a stunning QLED display

The latter is a significant distinction, because while Chrome OS is generally fine for students or everyday tasks like shopping or browsing the web, Chrome OS’s more limited software compatibility means Chromebooks can still feel somewhat restrictive when it comes to getting work done. And when you combine Windows 10 with superior specs including a faster Core i7-1065G7 CPU and double the base storage (512GB instead of 256GB), that means despite costing several hundred more than its Chrome OS-based sibling, the Galaxy Book Flex feels like a way better value.

But even more important than the choice of OS, is what Samsung did to distinguish the Galaxy Book Flex from other ultraportables without adding too much unnecessary bloat. By leaning on expertise from its TV business, Samsung claims the Galaxy Book Flex is the first laptop in the world with a QLED display. Compared to a standard LCD screen, the Galaxy Book Flex’s screen looks incredibly vibrant while also pumping out the brightness, hitting a peak of 597 nits in our testing. That’s almost 40 per cent brighter than what we saw from the new XPS 13. 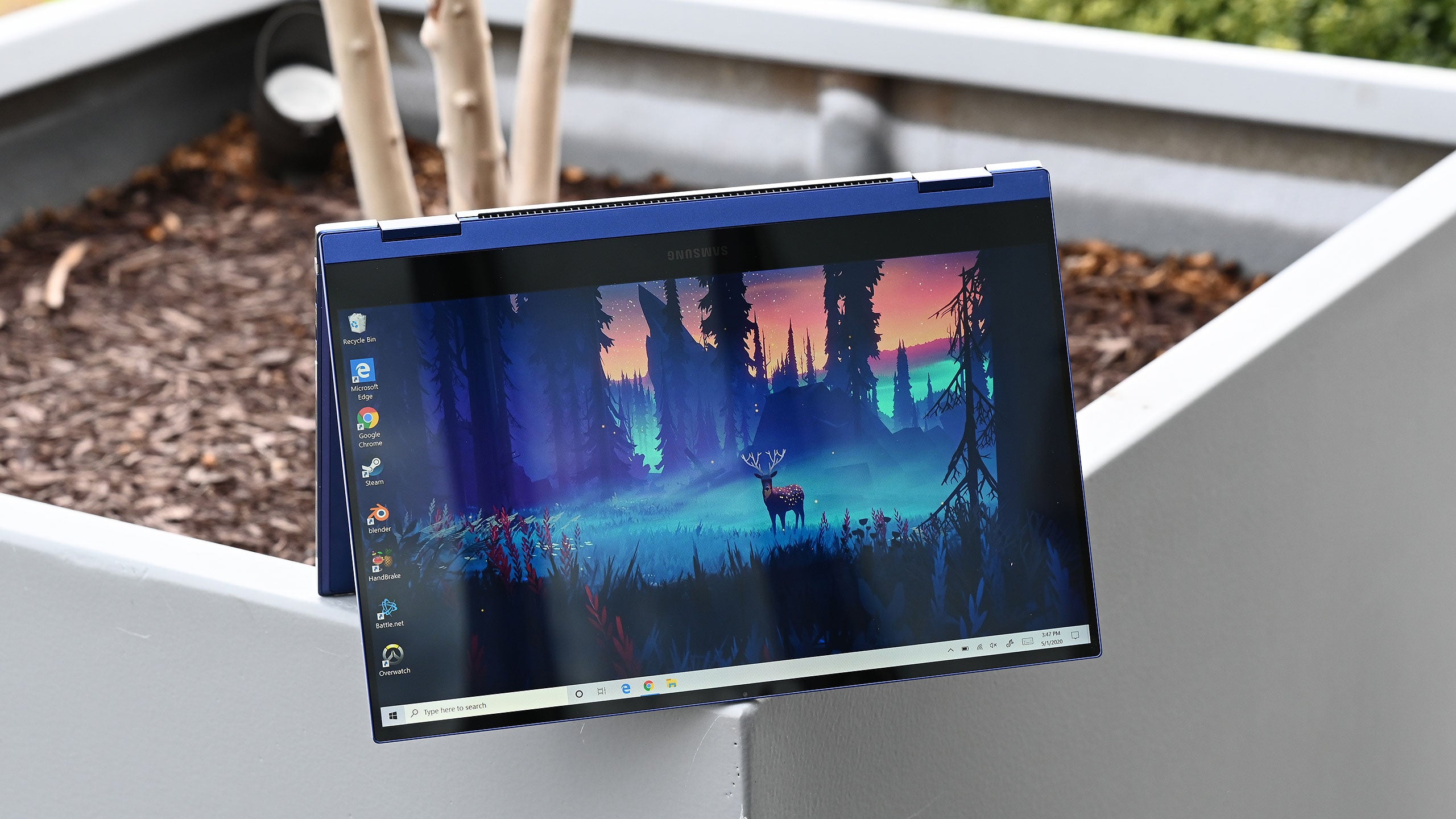 One thing I wish Samsung would improve is the size of the Galaxy Book Flex’s bottom (or top in this pic) bezel, as its significantly bigger than what you’d get on an XPS 13. (Photo: Sam Rutherford/Gizmodo)

That said, in order to make the screen that bright, you do have to enable the Galaxy Book Flex’s dedicated outdoor mode (which is easily toggled on via the laptops function keys), which slightly change the Galaxy Book’s colour profile. But in exchange, you get the luxury of being able to work outside and still easily read your screen, which considering how cooped up people have been as of late, feels like a real luxury. (Just try to maintain a healthy social distance where needed.)

Elsewhere, Samsung’s S Pen tech (which has its own built-in storage slot) is a nice inclusion on the Galaxy Book Flex, allowing you to quickly jot down a note, grab a screenshot, create a personalised Live Message, and more, which is something a lot of other mainstream ultraportables like the XPS 13 and MacBook Pro 13 can’t do. Sure, you’re probably not going to whip up a masterpiece with the S-Pen, as its slim dimensions and lack of customisable tips make something like the Surface Pro 7 a better choice for high-end creatives. But the included stylus is nice to have, and with its 360-degree hinge, the Galaxy Book Flex easily adapts to a wide range of situations.

The Galaxy Book Flex also sports more than satisfactory battery life, as it lasted 11 hours and 8 minutes on our video rundown test. That’s more than an hour longer than a comparable XPS 13 (9:59) and more than two hours longer than a similar, but less expensive mid-range 2-in-1 like the Lenovo Yoga C740 (8:45).

Samsung also threw in a couple bonuses too, like a built-in fingerprint reader that works with Windows Hello for streamlined one-touch sign-in, and a touchpad that turns into a wireless charger. That means if you want to top off your phone while you’re out and about, you can just select an option from inside the Windows 10 notification panel, slap your phone on the touchpad, and that’s it.

The downside is that you can’t use the touchpad while it’s being used as a wireless charger, because even if your phone wasn’t in the way, touch inputs are disabled. That makes it difficult to multitask by charging your phone while you work, but as a small nod to overall utility, I’m still happy it’s there. 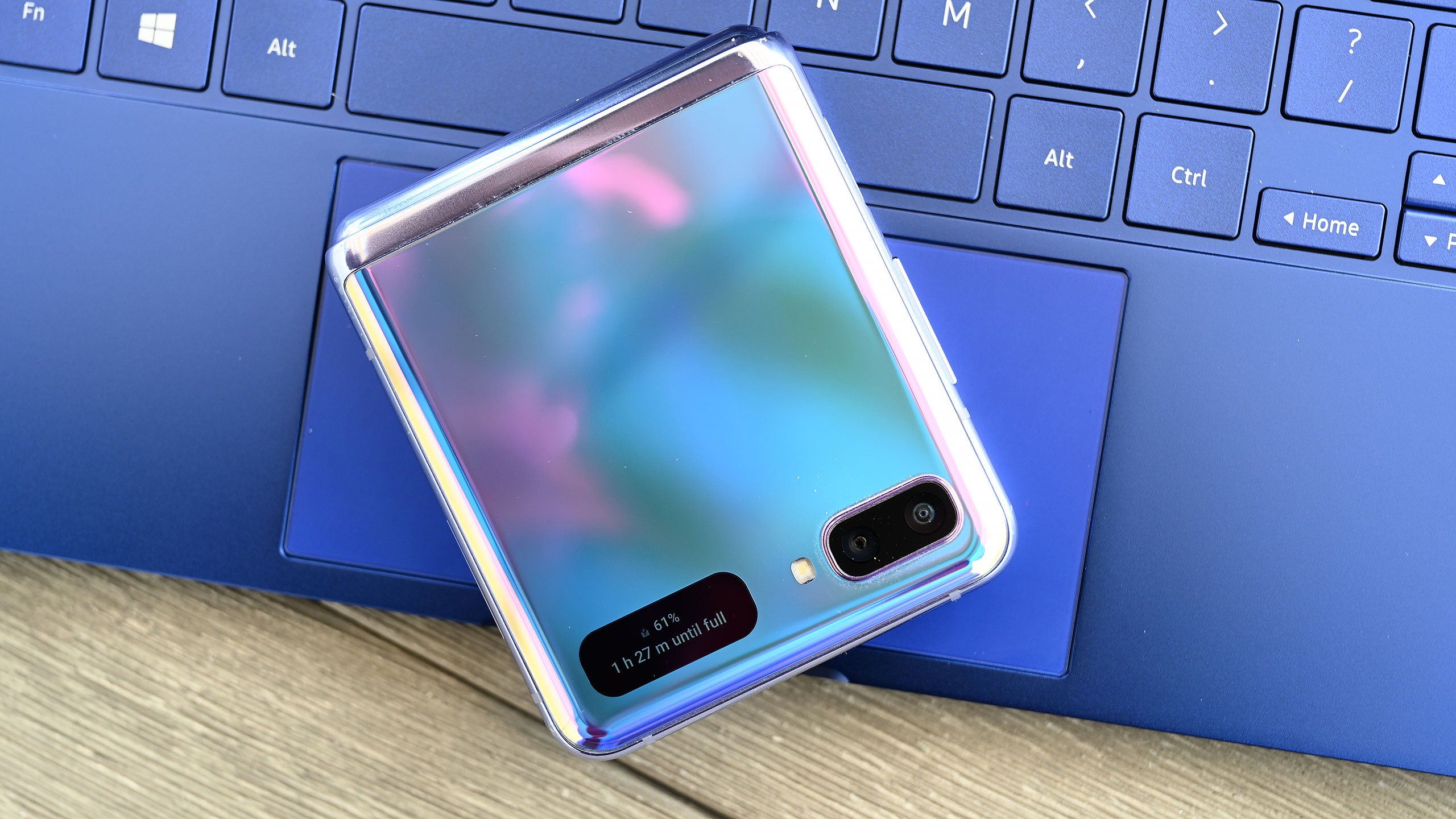 Building a wireless charging into the touchpad is kind of clever, but because that stops you from actually using the touchpad, you’ll probably still want to keep a cable around too. (Photo: Sam Rutherford/Gizmodo)

As for any potential gripes about the Galaxy Book Flex, there really aren’t many. Some might find Galaxy Book Flex’s somewhat shallow keys a bit unpleasant, but Samsung does a good job of combating typing fatigue by giving the keys a relatively stiff and bouncy feel. Meanwhile, others might find the exclusive use of USB-C ports (two of which support Thunderbolt 3) across the laptop a small annoyance, though Samsung addresses that too by including a USB-C to USB-A port for free in the box. And while the Galaxy Book Flex does come with a microSD card reader, it’s one of the smartphone-style trays that needs a pin to eject, which can be a hassle if you’re regularly swapping a card between your laptop and some other device. But like I sad, a handful of small issues, but all of them are pretty minor.

On the graphics side, the Galaxy Book Flex’s Iris Plus integrated GPU isn’t really meant for things like intense video editing or gaming. Although, if you don’t mind tweaking with the settings a bit, you can still enjoy less demanding titles like Overwatch or League of Legends without much trouble.

Honestly, the Galaxy Book Flex’s biggest downside might be its lack of configuration options. Its Core i7 CPU, 8GB of RAM (or 12GB on the 15-inch model), and 512GB compares favourable against a similarly specced XPS 13, but you don’t have the ability to upgrade to a 4K display, a larger SSD, or more RAM, or even downgrade to a Core i5 chip as needed. 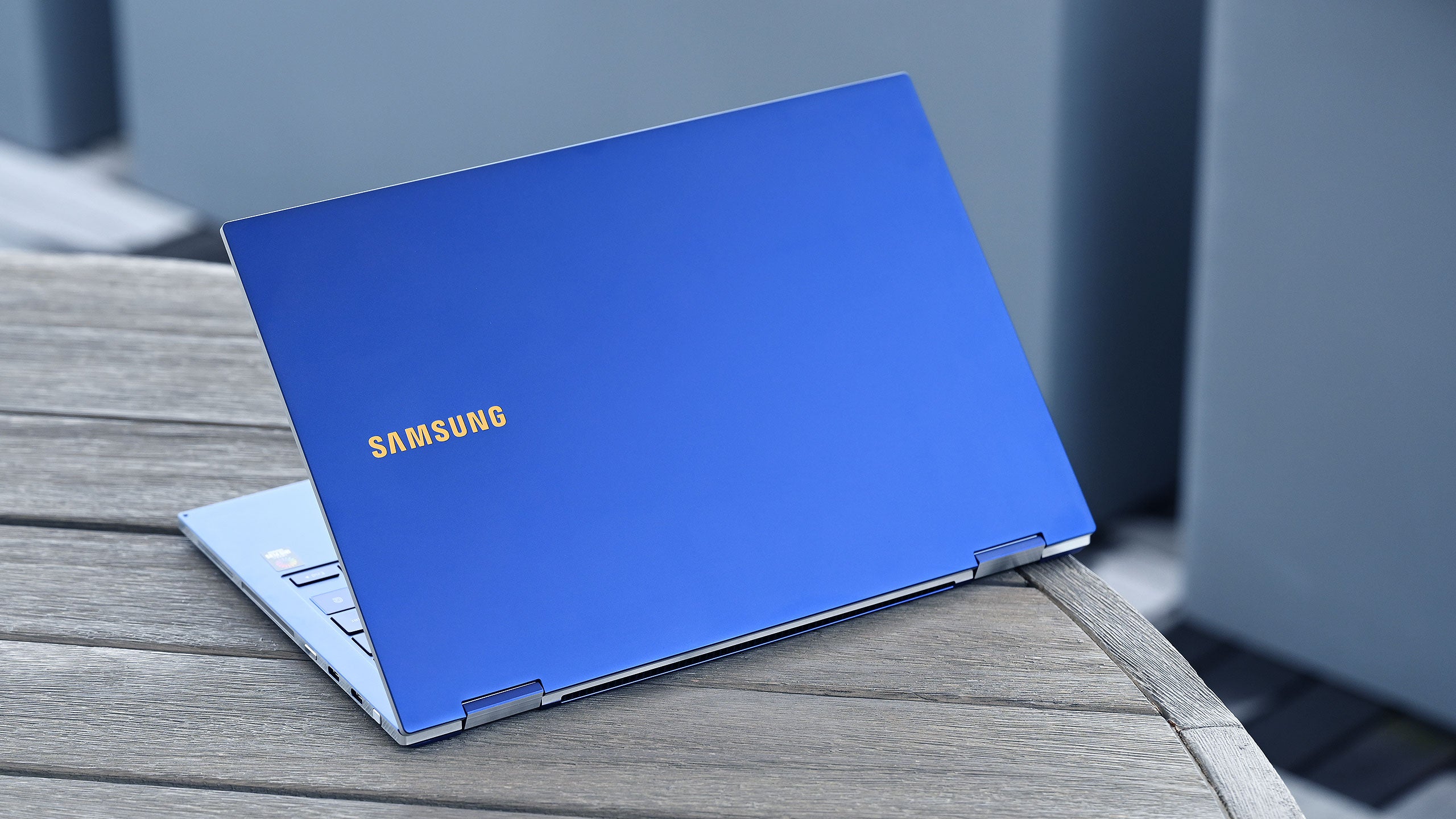 The Galaxy Book’s blue anodised finish offers a great pop of colour in a sea of silver and black alternatives. (Photo: Sam Rutherford/Gizmodo)

Still, while it may have taken Samsung a bit longer to create a new identity, the Galaxy Book Flex marks a strong new chapter for Samsung’s laptop division. It’s got a great, but simple design, a brilliant screen, and a handful of useful extras that help add a little bit of personality and expertise. And while its limited config options means it’s not a one-size-fits-all alternative to something like an XPS 13, for people who want something a bit more stylish, the Galaxy Book Flex is a solid alternative.