A popular painting app for the Nintendo DS and 3DS that relied on each handheld’s stylus is finally coming to the Switch. But instead of forcing users to paint with their fingers, Colors Live will include a stylus that cleverly uses the Switch’s headphone jack for pressure sensitivity and a better painting experience.

The Switch’s touch screen means that styluses are already available for the console, but they simply emulate the capacitive effect of a human finger and don’t facilitate other advanced functions like shortcut buttons or pressure sensing. Those features require additional technologies that Nintendo presumably skipped to keep the Switch’s price tag down, but they’re also features that can improve the digital doodling experience, as anyone who’s ever sketched or painted using a Wacom tablet or the Apple Pencil can attest. 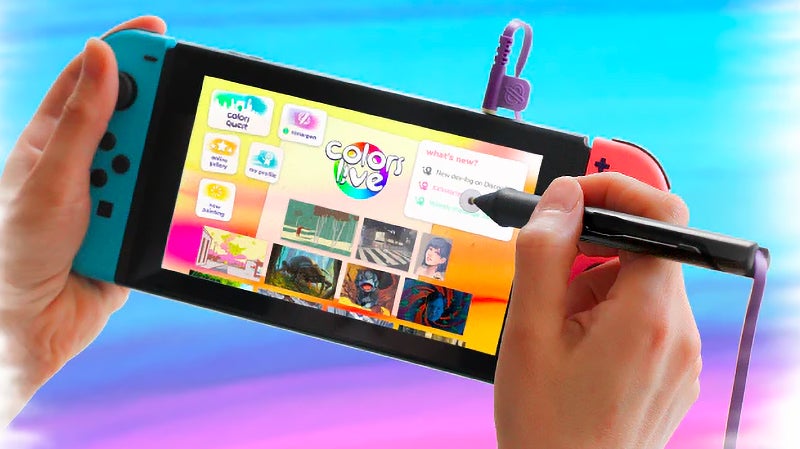 For the Nintendo Switch version of his Colors! painting app, Jens Andersson wanted to introduce an improved experience given the system’s power, and its large screen. So the app is being bundled with a new stylus accessory that doesn’t rely on Bluetooth and doesn’t require batteries or even charging. The SonarPen instead features a half-metre cable on the end that plugs into the Switch’s headphone jack. The painting app sends an 8,000 hertz tone through the cable to the tip of the stylus, and when the SonarPen makes contact with the Switch’s screen that tone is dampened as pressure is applied. A microphone inside the stylus records the altered tone and sends it back to the Switch through the headphone cable where the Colors Live app translates the changes in volume into varying levels of pressure being applied.

The SonarPen might not be as sensitive as a Wacom stylus or the Apple Pencil, but it’s also nowhere near as expensive as both of those accessories are. Colors Live for the Switch is currently being crowdfunded through Kickstarter (as Nintendo didn’t think the hardware + software combo was a good fit for its eShop) and the bundle will set you back about £32 for the app and the SonarPen together. Assuming you’ve already got a Switch, that’s probably the cheapest way to dabble in digital artistry.

The usual crowdfunding risks apply here, but over the years Andersson has delivered countless versions of his art app to various platforms, and it’s always been well-reviewed. Colors Live for the Switch does add hardware challenges to the mix with the SonarPen – there’s always the chance snags or hiccups in production could delay the estimated August 2020 delivery, and Nintendo still has to complete its certification process for the app to be allowed on the console. But the campaign has already blown past its funding goal, so as long as you’ve got the patience to weather a potential delay, this seems like another innovative way to expand what your Switch can do.