Amazon's Next Big Bet on Cashless Shopping Is a Smart Trolley

Amazon opened its first cashless Go convenience store in 2018 before following that up with its first full-size cashless grocery store earlier this year. But for its next attempt to revolutionise brick-and-mortar shopping, Amazon is betting on a smart shopping trolley.

Amazon calls it the Dash Cart, and it’s designed to help traditional grocery shopping go cashless by eliminating the need for the usual bank of tills at the checkout. However, instead of installing hundreds or thousands of cameras in the ceiling of a store like Amazon does in its Go stores, on the Dash Cart Amazon builds cameras and sensors into the trolley itself which tracks items as they are placed inside so that when you’re done, you can check out simply by pushing the cart through a designated Dash Cart lane.

To ensure the right person is getting billed, the Dash Cart also features an onboard QR code reader that allows people to sign-in to their Amazon account with their phones, while a small built-in screen allows you to check your Alexa Shopping List and view an updated subtotal alongside a list of items in your trolley.

Meanwhile, for items like fruit or veggies that don’t have an easily scannable barcode, the Dash Cart has an integrated scale, which allows users to enter a PLU code for the item they want, while the trolley automatically weighs the item after it’s placed inside. Then, the only thing you need to do is confirm the weight of the item. 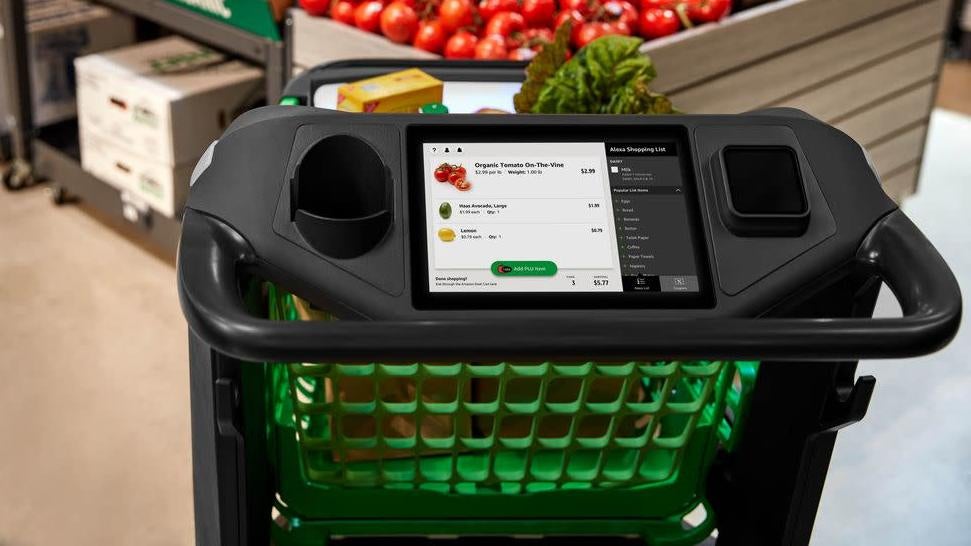 For Amazon, the advantages of the Dash Cart are clear, as it allows Amazon to build or convert traditional grocery shops into cashless stores without needing to install the expensive and complicated camera system it uses in its Go stores. And while it isn’t available in stores just quite yet, Amazon says the Dash Cart will make its official debut at the company’s new Woodland Hills location in the US state of California, which is expected to open sometime later this year. With Go stores still confined to the US, at least for now, it's hard to say when (if ever) we'll get our hands on the Dash Cart here.

As for its downsides, one of the Dash Cart’s biggest drawbacks is limited capacity, as it only has enough room to accommodate two grocery bags. That means it’s really only good for small to medium size shopping trips and not your big weekly family shopping hauls. Furthermore, because the cameras and sensors mainly track what goes into the trolley, Amazon will probably need more human clerks to help keep track of inventory or help resolve any technical difficulties, which would seem to go against Amazon’s goals of automating as much of the shopping experience as possible.

That said, for people who might be creeped out by the thousands of cameras in a regular Go store watching their every move, the Dash Cart could be a suitable compromise, but we won’t really know until people actually get to use them sometime later this year.