Apple Music Sucking Up Your iPhone Battery Life? You're Not Alone

If you have an iPhone and recently noticed that your battery isn’t lasting as long as it used to, you may not be alone: Many iPhone owners are claiming that they’ve noticed Apple Music is responsible for excessive battery drain.

According to complaints on both the official Apple Support forums and Reddit, first spotted by MacRumors, users with iPhones running iOS 13.5.1 and iOS 13.4.1 claim background activity from Apple Music is sucking up an inordinate amount of battery, resulting in battery usage upwards of 50% in some cases.

One user on Apple’s Support Communities posted a screenshot of their iPhone’s battery usage, showing a large spike in recent background activity with Apple Music responsible for sucking up 53% battery in one day. The kicker: That user claimed they had never opened Apple Music that day.

Over on Reddit, an iPhone owner posted a screenshot showing battery usage for Apple Music at a shocking 95% – even if you streamed Apple Music nonstop for an entire day, that would be incredibly high. 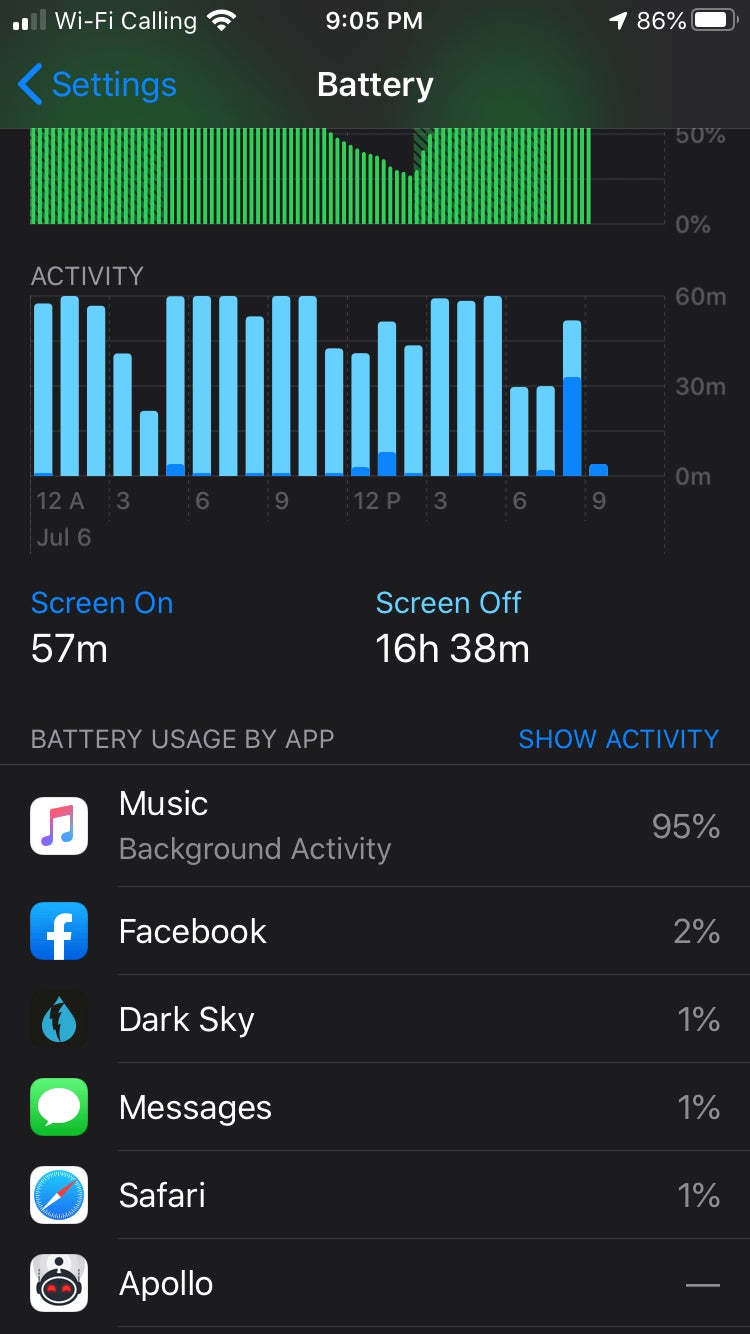 Even if you were streaming Apple Music all day while doing little else, 95% battery usage would still be extremely high. (Screenshot: u/ritty84/Reddit)

The current theory behind Apple Music’s unusual battery drain is that recent changes in iOS and Apple Music are causing the app to constantly ping Apple servers while also trying to download content in the background. Some complaints were reported as far back as April, but there seems to have been a large spike of reports claiming excessive battery usage over the last few weeks.

What makes the issue so difficult to pinpoint is that it’s hard to correlate the exact amount of time spent using Apple Music with how much energy it’s using, especially in less extreme cases where Apple Music may only account for 30% or less of an iPhone’s battery usage. One Gizmodo staff member recently reported a few instances where, after using Apple Music, their iPhone 8's battery life dropped significantly faster than expected.

For people who think they may be suffering from excessive battery drain caused by Apple Music, there are a number of troubleshooting options you may want to try. The easiest of these is to force quit Apple Music, delete Apple Music and then reinstall, or simply try restarting your iPhone. But if that doesn’t work, some users have reported success by disabling Automatic Downloads from the iPhone’s settings menu, disabling Background App Refresh, or cancelling all downloads in your Apple Music Library.

In extreme cases, some users have tried factory resetting their phone, but if you do this, you’ll want to make sure you back up all your data first.

Gizmodo has reached out to Apple for more information on the issue, and we will update this story if we hear back.