This week saw the surprising reveal of the next animated entry in the vast Star Wars saga: The Bad Batch, spinning out of Clone Wars’ final season to tell the story of an elite team of Clone Troopers against the backdrop of the rise of the Empire. They’re the latest in a long line of elite clones on the frontline, but their arguable progenitors are no longer Star Wars canon.

Back when Star Wars: The Clone Wars was a twinkle in George Lucas’ eye, the year after Attack of the Clones hit cinemas, Cartoon Network shook the galaxy far, far away with a fever dream of a pitch: Clone Wars, an anthological, action-driven short series set at the height of the titular conflict, spearheaded by an animation team lead by Samurai Jack, Powerpuff Girls and Dexter’s Laboratory icon Genndy Tartakovsky. Its penchant for spartan dialogue and its emphasis on outlandish action came to define Clone Wars as Star Wars at its most stylish, but also Star Wars at its most “badass”.

Although its follow up – set closer to the end of the war and tied directly into Revenge of the Sith – would incorporate more comprehensive storytelling, Clone Wars is remembered for its killer action. Mace Windu doing Force-kung fu. Kit Fisto slicing through massive underwater droids like they were made of butter. On the evil side, General Grievous just tearing through a group of horrified Jedi, or Asaaj Ventress’ stunning rain-soaked duel with Anakin Skywalker. But it wasn’t just Jedi and Sith that benefited from Clone Wars’ action: the Clones got in on it too, and in Captain Fordo and the Muunilist 10, they got to be the kickarse stars every bit as cool as the space wizards with their fancy magic tricks and laser swords.

The Muunilist 10 only make major appearances in two episodes of Clone Wars: “Chapter 3”, their true moment in the spotlight, and in “Chapter 21”, when Fordo and his men come to the aid of the Jedi survivors of that aforementioned General Grievous beatdown. But even in that tiny, tiny moment – maybe five minutes of screentime, if that – in which they barely said or did anything except shoot a large number of things, Fordo and his men are seared into the minds of anyone who watched Tartakovsky’s series.

Turning hyper competence up to the max, the Muunilist 10 were a truly elite group. They’re practically unstoppable, managing to survive their gunship being shot down, pinned down by droid kill teams and a tank like it’s nothing, before getting to their target and taking it down while barely breaking a sweat. Fordo guides them with a ruthless precision, not through his voice but with simple, crisp hand gestures. It’s cool as all hell. But it also makes them odd to revisit in the cultural context of where Clone Wars has passed into Legends, and The Clone Wars now exists in its canonical stead. 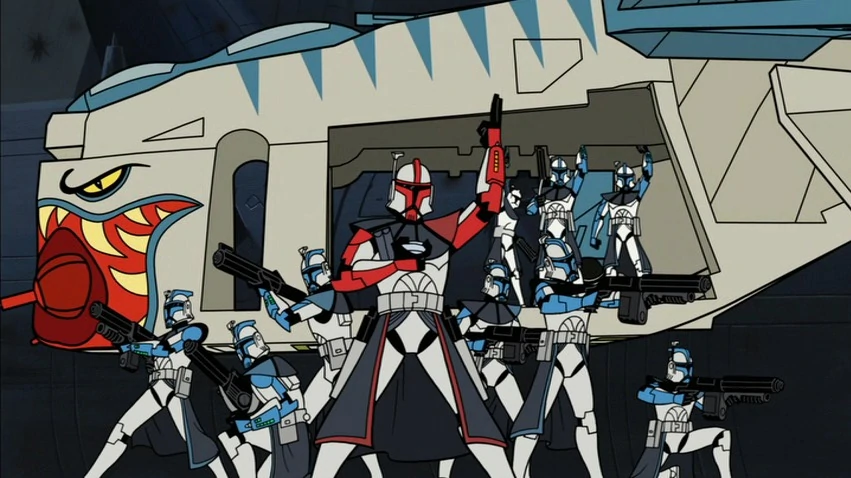 They’re not like the clones we would go on to meet and love in The Clone Wars. They’re barely human, because there’s no time for them to be: they are blank, masked killing machines who get in, get it done, and get out. We don’t get to know who these clones are, the nicknames they’ve taken for themselves, they don’t crack jokes or share banter with each other, or talk about the comradeship that unites them as not simply soldiers but brothers. There is a brutal precision to them that is, re-examined in the context of what Star Wars: The Clone Wars would go on to do with the Clone Troopers, that strange mix of gleefully exciting to watch and in some parts, oddly chilling.

What makes them so different from the droids they take down without breaking a sweat if we never get to see the humanity underneath their helmets? It’s something that this version of Clone Wars would never get to examine – and really wasn’t intent on examining – but would become so vital to what made its successor tick.

The potential the Muunilist 10 would represent – and the fact that Fordo, at least, got to live on in ways big and small through the equally excellent Dark Horse Clone Wars comics – went on to inspire so many beloved characters, from the heroes of Republic Commando and their compatriots in Karen Traviss’ landmark novel series, to figures like Cody, Rex, and their many Dee Bradley Baker brothers in The Clone Wars, the Bad Batch included. Even if they’re no longer an official part of Star Wars’ vast tapestry, there’s a small comfort in how their legacy is still alive and thriving in that tapestry, nearly two decades later.