If These Leaked Pics Are Real, the Galaxy Note 20 Is Going to Look Awesome In Copper

While Samsung still hasn’t officially announced the Galaxy Note 20, Samsung’s Russian website may have just let the cat out of the bag by inadvertently posting photos of the Note 20 featuring an enchanting copper finish.

Unfortunately, it’s still a bit unclear if this is actually the Galaxy Note 20 or not, though it seems quite likely. The potential slip-up was first spotted by noted leaker Ishan Agarwal, after visiting the page for ourselves, Gizmodo can confirm that these pics are being hosted on Samsung’s official Russian website.

Where the confusion lies is that the photos are found on a listing for the Galaxy Note 8 next to a caption that says “Discover the next generation Note” and a link that takes you to a listing for the Galaxy Note 10—not the Galaxy Note 20. That said, previous leaks have already indicated that Samsung may feature copper on its next wave of devices including the next Galaxy Watch, with a tweet from Ice Universe seemingly confirming copper as the next signature color for Galaxy Note 20. Furthermore, the design of the phone and arrangement of its rear camera modules aligns with previous fan renders that were created based on leaked schematics. 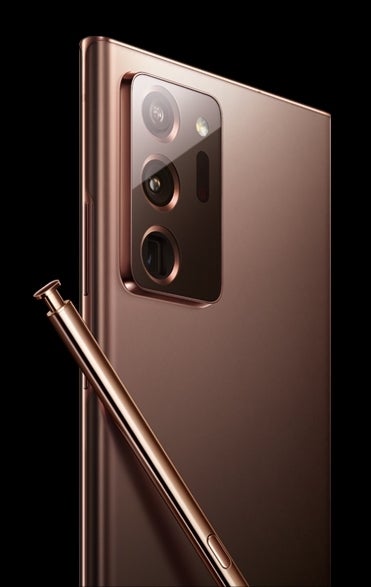 Every flagship phone for Samsung generally gets its own signature colour, with last year’s Galaxy Note 10 sporting Samsung’s pearlescent Aura Glow finish, while the Galaxy Note 7, Galaxy Note 8, and Galaxy Note 9 all sported a custom shade of blue (specifically Blue Coral, Deep Sea Blue, and Ocean Blue). Samsung also tends to offer any new peripherals launching alongside a new flagship phone in a matching colour, which suggests rumoured upcoming products like the Galaxy Buds X or a Galaxy Tab 7 could sport the same copper finish as well.

Either way, after years of rose gold being featured on tonnes of gadgets, it’s nice to see that copper is making a comeback, and if the Note 20 ends up looking anything like it does on these leaked pictures, Samsung could have a real head-turner on its hands.

So when is all this supposed to get announced for real? While nothing is technically official, Samsung is expected to host its next big Galaxy Unpacked event later this summer on 5 August, so check back around then for more info on Samsung’s next big phone.