iOS 14 Will Completely Change the Way You Use Your iPhone

Every year Apple introduces a new version of iOS, and every year promises to deliver a huge change in the way we use our phones. But I’ll be honest: Using my iPhone basically always feels the same and has for years, even with all the little tweaks and new features Apple continues to add. This time, though, is different. I’ve been using the iOS 14 developer beta for what seems like all of time but has actually been less than two weeks, and it’s profoundly changed the way I use my phone – in a good way.

The iOS 14 public beta began rolling out yesterday, which means it’s stable enough for anyone to try. The public beta of iPad OS 14, which includes almost all of the same features as iOS 14, is also available now.

Before you jump in and start installing, hear me out. First, let’s preface with the usual caveats: This is not a review, but some notes about my own hands-on time with Apple’s pre-release software. iOS 14 is still in beta, and with a beta comes bugs. If you decide to install the public beta, I recommend putting it on a device you don’t need to work dependably. (In my personal experience using the iOS 14 developer beta on an iPhone 11 Pro that I use as my daily driver, everything was mostly fine, but you never know!)

Here’s what it’s like to live with iOS 14 – and why it’s such a major change.

Widgets and App Library Cut Through the Chaos

The most dramatic shift in iOS 14 is the layout of the home screen. It can stay the same if you truly hate change, but I encourage you to play around with widgets, which you can now add to your home screen by long-pressing on the screen and then tapping the + on the top left. From the Widget Gallery, you can choose which apps to add to your home screen – I currently have Apple Music, Apple News, and Weather for quick access to my favourite tunes, news headlines, and the weather forecast, but I’ve been experimenting with this layout a lot.

You can move the widgets around, add enough of them (four or five) to move every app icon off the home screen to a second page, and change their design to view more info or less. You can create stacks of widgets to flip through, or let Apple create a Smart Stack of widgets based on what it knows about how you use apps. Basically, you can truly personalise your home screen for the first time in iPhone history. It’s a big deal.

Long press the home screen and tap the + to get to the Widget Gallery. (Photo: Caitlin McGarry)

Right now your only widget options are Apple’s own, but this autumn you’ll see widgets for third-party apps here. (Photo: Caitlin McGarry)

When I wake in the morning, I see a couple of Apple News headlines, which is enough to be informative but not as traumatic as a scroll through the horrorfest of Twitter. I see the local forecast, or I can quickly hop into my newest favourite album to start my workday with some good tunes. Alongside those widgets, I keep four of my most-used apps so I can quickly check Twitter, Instagram, Slack, and my work email. I also put my old stand-by apps – Calendar, Messages, Mail (for my personal inbox), and Safari – in the bottom dock. It’s the perfect setup. Even better: This will look completely different for everyone.

In the iOS 14 beta, you’ll only be able to customise widgets for Apple’s apps since third-party apps for iOS 14 aren’t yet available. But I’m excited to see what developers do with them. When iOS 14 officially rolls out this autumn, you’ll be able to see third-party widgets in the Widget Gallery. 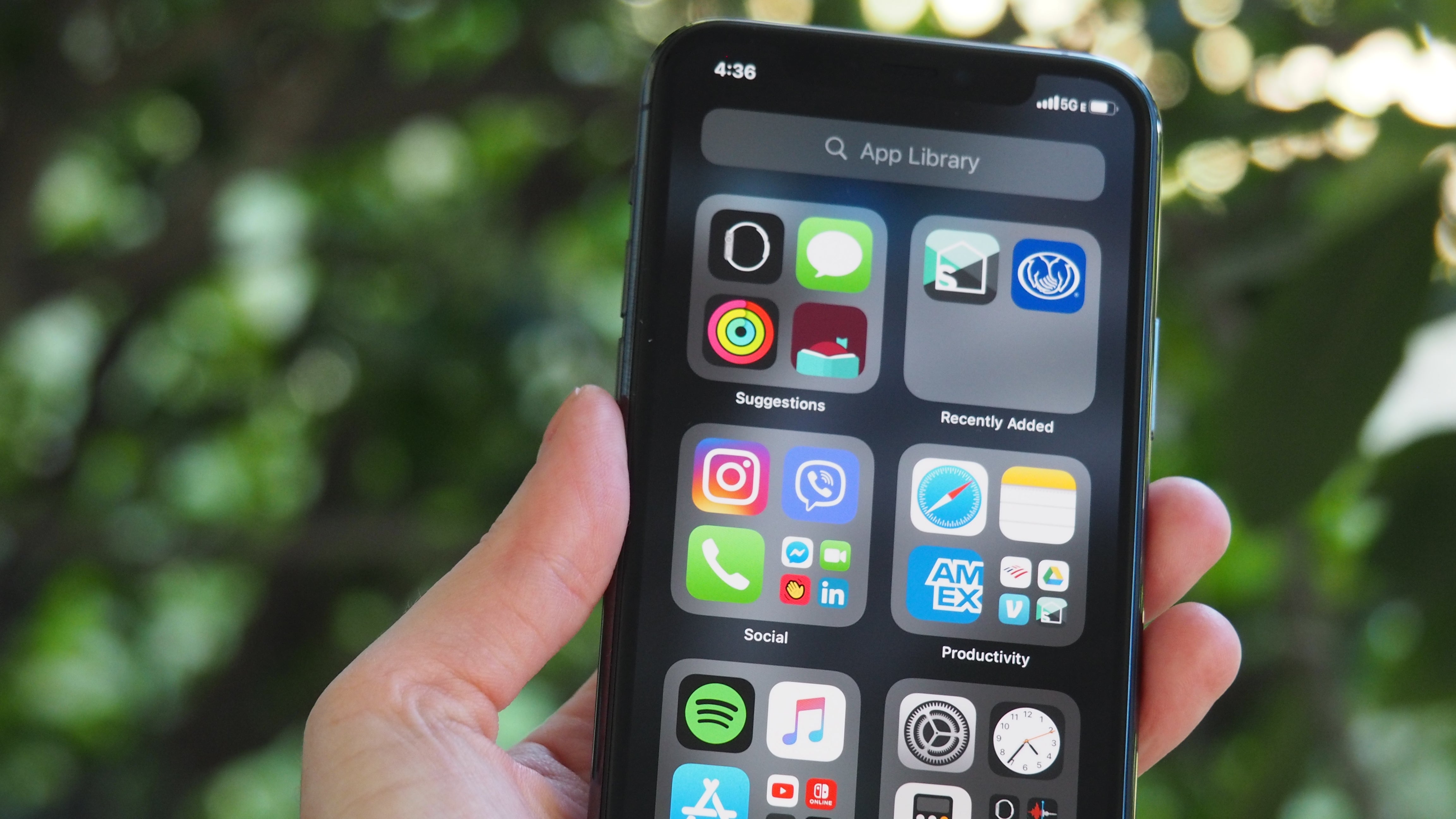 After I customised my home screen, I gingerly swiped to the right of my home screen to view the endless jumble of apps scattered across multiple pages. It’s a whole situation that could generously be described as a shitshow. As a tech journalist who tests a lot of devices with various companion apps, the apps I use on a regular basis are a mess. I occasionally get the urge to wrangle them into neatly labelled folders, but usually, I just use the Spotlight search bar to find what I’m looking for. iOS 14's App Library does the work I will not, organising all of my apps into perfect little windows where I can see every app icon. The icons I use more frequently are larger. You can’t change these categories or rename them, but in this case, I’m perfectly content to let Apple take the wheel. (My one request is that the company separate Food from Lifestyle now that restaurant takeout and delivery is our new way of life and I have more dining apps than I know what to do with.)

iOS 14's new interface has helped me focus on the stuff I need. The rest is just clutter filed away in the App Library.

There are a few other changes to the iOS interface that have quite simply made my life easier, which has really made me wonder why they weren’t possible before, but whatever – onward! Apple has introduced what it calls a “compact” user interface in iOS 14, which means that you can do some tasks, like FaceTime, watch YouTube videos, and ask Siri questions, without completely halting what you were already doing. 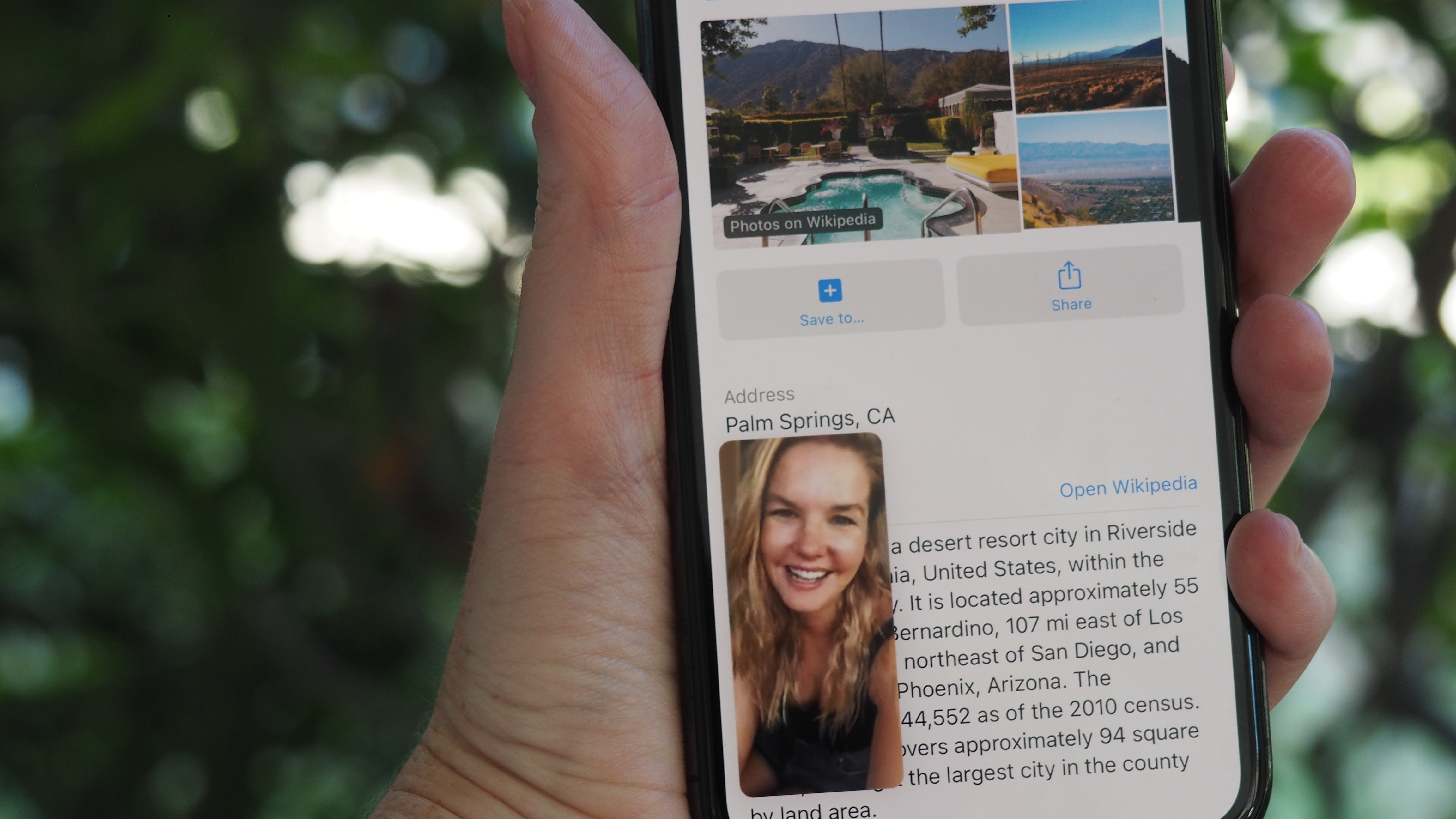 Dreaming of holidays with girlfriends over FaceTime is now much easier, thanks to iOS 14's picture-in-picture feature. (Photo: Caitlin McGarry)

I’m obsessed with this. I’ve been using the iPad’s Picture-in-Picture feature since it debuted, and while I don’t plan to use the same feature on my iPhone in quite the same way (because binge-watching tiny, tiny TV shows while doing other stuff isn’t appealing), the option to jam out to new a music video while checking emails or send texts while on a FaceTime call is a dream. Now that we’re all relying on FaceTime a lot more to stay in touch with friends and family, it’s nice that I don’t have to pause a call when I have to respond to a Slack notification or when I want to Google something.

Siri’s new compact interface is also much more useful: When I ask the assistant to perform tasks, it no longer takes up the entire screen. That makes it more useful to add ingredients to a shopping list while looking at a recipe, for instance. 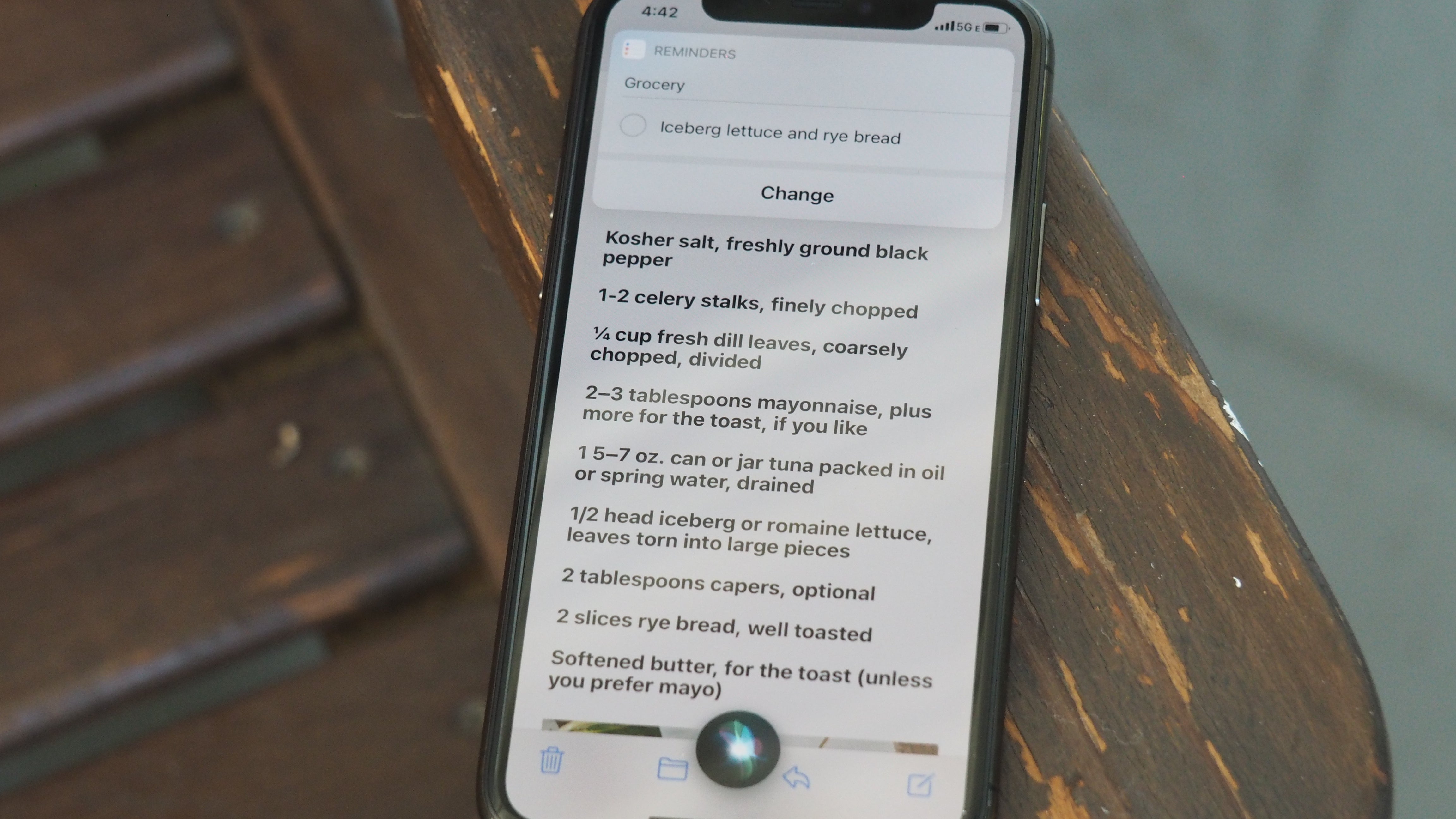 Look at Siri being helpful in iOS 14! (Photo: Caitlin McGarry)

However, Siri still can’t set multiple timers at the same time, and there’s really no excuse for that in the year 2020.

I don’t know about you, but my iPhone’s Messages app has become unwieldy, to say the very least, mostly because I have group chats on group chats with various friends and family members. Some of the group threads have funny names, while others are just a long list of who’s in them. Then there are the threads themselves, which can be truly chaotic – and heaven help you if you check in a few dozen messages deep; at that point all you can do is add reactions to the stuff you want to like or laugh at and move on. But Messages is getting an overhaul in iOS 14 that makes it easier to label and respond to group chats. Once all of my friends and family are on board with iOS 14, it’ll be a brave new world. 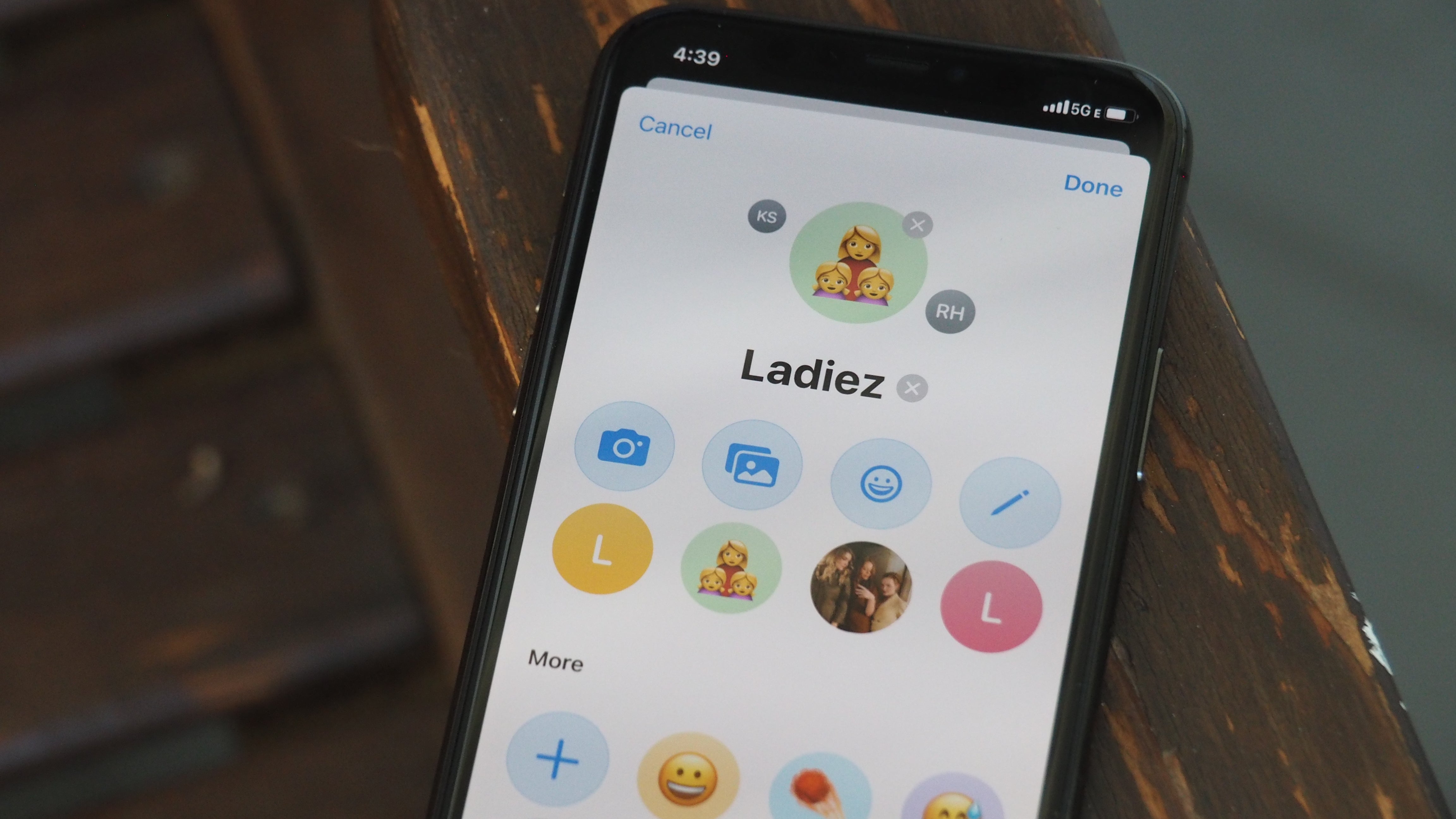 It’s all pretty basic stuff: You can add a photo, emoji, or Memoji to label a group chat (which will make it stand out from the others). You can reply to a specific text in a group conversation and start an in-line thread instead of side-texting someone privately to follow up on something that has long since been buried. You can @ someone by name to flag their attention. You can pin conversations to the top of the Messages app to more quickly access the people you talk to most often. These are all good, useful features, many of which I’ve used in Slack to control the flow of my work convos for years. Now I can do the same in my personal life. (Note to people who know me: If I try to convince you to sign up for the iOS 14 public beta this summer, it’s just for my own sanity.)

Apple has been beating the privacy drum loudly and consistently for years, but iOS 14 is pretty insistent that you pay attention, dammit to how third-party apps work: what they do behind the scenes, which information on your phone they request access to, and how they use your data. This is good! Developers have already discovered in the iOS 14 beta that several apps, including Reddit, LinkedIn, and TikTok, were irresponsibly copying information from your clipboard for apparently no good reason other than they could. 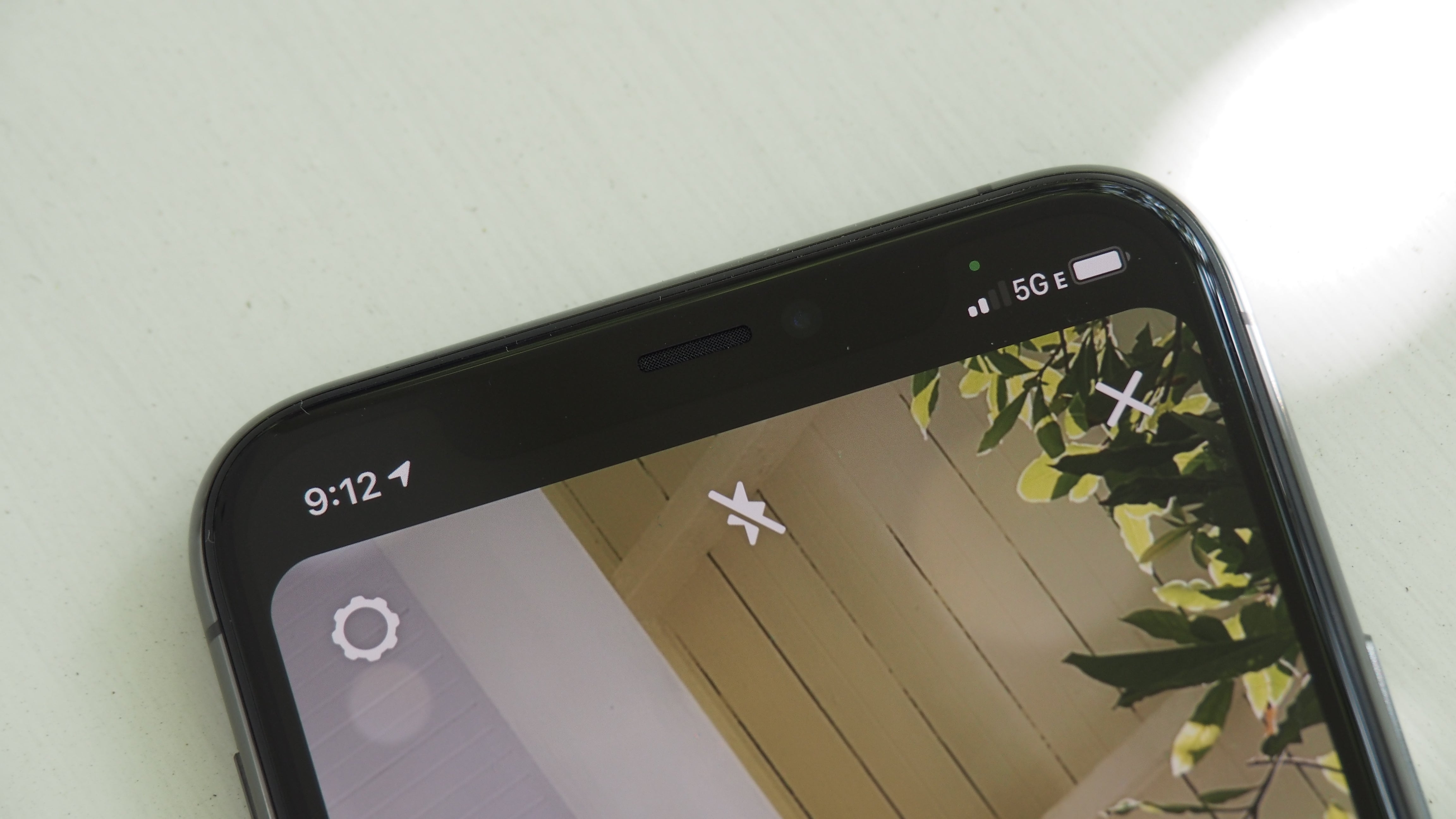 That little green dot at the top right signals that an app is using my camera (in this case, it’s Instagram). (Photo: Caitlin McGarry)

I really, really appreciate having granular control over things like which photos to share with apps that request access to my camera roll, or the ability to share my approximate location with an app instead of my exact spot. And a recording indicator on the top right shows me when an app is tapping my camera or microphone, like the light on my MacBook camera does (so far, it’s only been the usual suspects, but this is something I plan to watch). After installing iOS 14, it might feel like you have to completely rethink your privacy settings for every single app – and maybe you do.

When iOS 14 officially rolls out, developers will have to ask your permission to track you around the internet (I would recommend denying those requests, but that’s just me). And you’ll be able to see an app’s privacy practices spelled out on its App Store page before you even install it, which people may not pay attention to but, hey, at least it’s there.

So Far, So Good 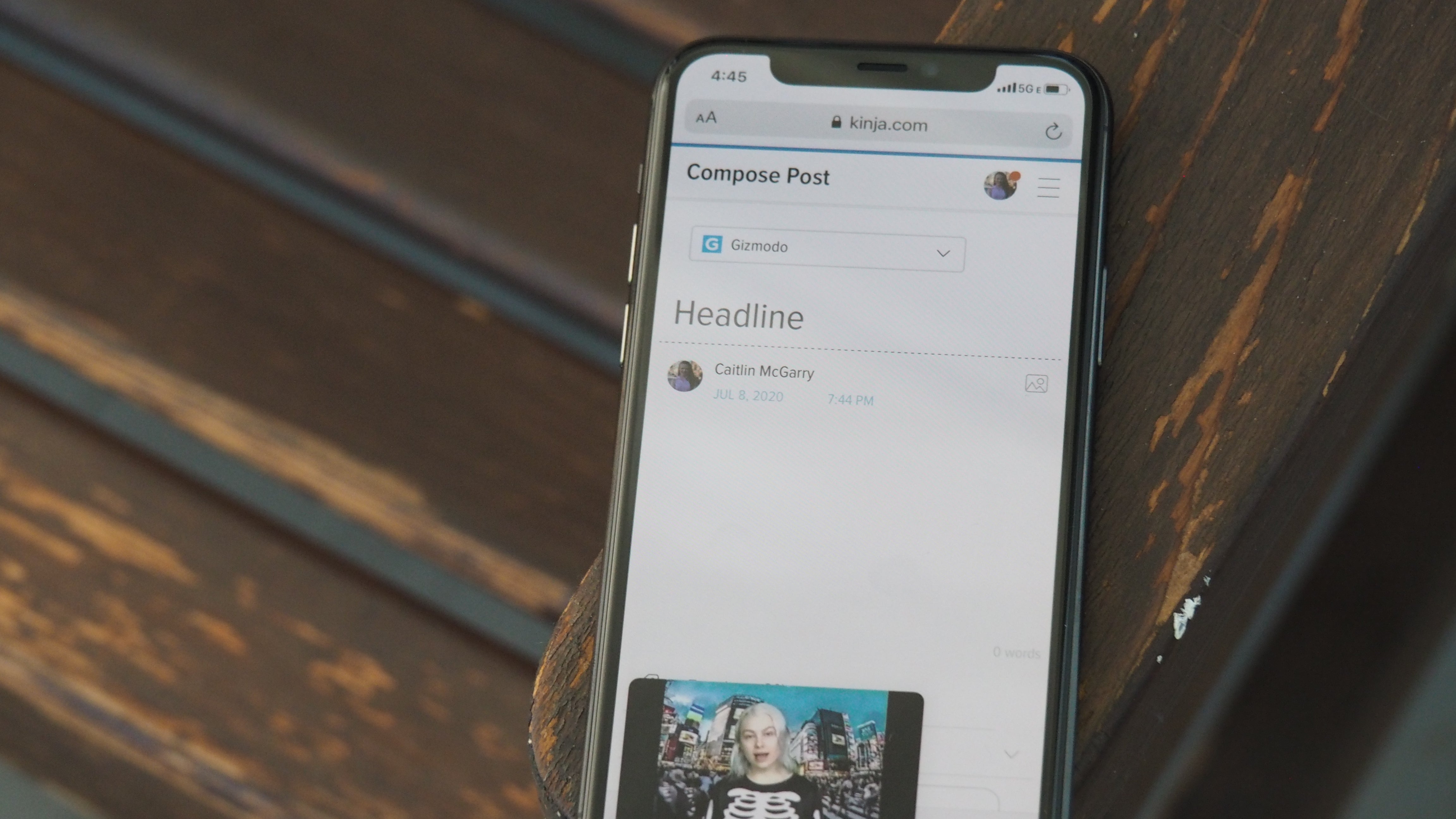 Sorry, but I can’t get over this picture-in-picture feature! (Photo: Caitlin McGarry)

I haven’t been using iOS 14 long enough to thoroughly test every feature. There are some, like the refreshed Maps app, that honestly make me too sad to try out. Why do I want to make a guide for a place I won’t be able to travel to for who knows who long? There are other new tools, like App Clips, that won’t be widely available until developers finish creating the bite-sized extensions of their full apps. And I’ve tried my hand at the brand new Translate app, but until I need to use it in another country, I’m not really putting it through its paces. After all, I almost never leave my house, let alone communicate with someone in another language.

But for now, I like what I see. iOS 14 is encouraging me to interact with my iPhone in new ways, and to be more thoughtful about my priorities. It might just be the most useful iOS upgrade we’ve seen in ages – but for real this time.