An amateur astronomer in South Africa has detected a bright new surface feature rising above the cloud tops on Jupiter.

The largest planet in the solar system has a bright new blotch in its southern hemisphere, reports NASA. The cloudy plume, dubbed “Clyde’s Spot,” appears between Jupiter’s iconic Great Red Spot and S2-AWO A7, another big storm to the southeast.

Jupiter’s new spot was discovered on the morning of 31 May 2020 by Clyde Foster, director of the Shallow Sky section of the Astronomical Society of Southern Africa and the astronomer for whom the feature is now named. Foster was imaging Jupiter at the time, spotting the spot with a filter that’s sensitive to methane gas. Interestingly, the feature was not seen by astronomers in Australia just a few hours earlier. 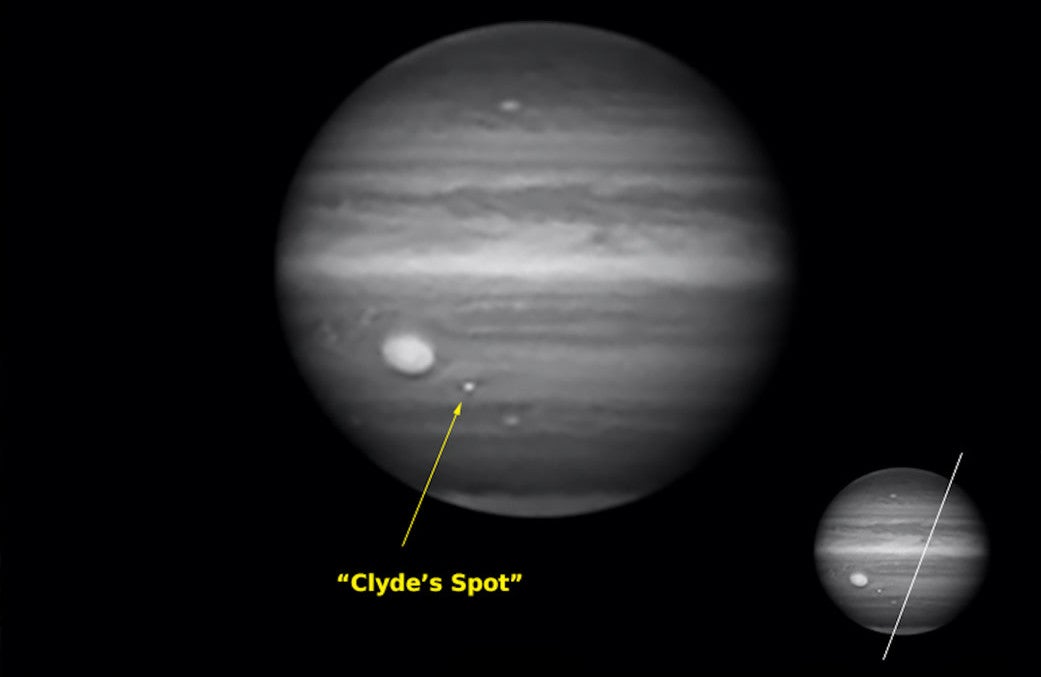 The new feature, as discovered by astronomer Clyde Foster and as seen through a filter sensitive to methane wavelengths. (Image: Clyde Foster/ASSA)

In a stroke of amazing luck, NASA’s Juno spacecraft made its 27th perijove, or close flyby of Jupiter, just two days later on 2 June 2020.

“Given the timing, the fact that Juno is in a 53 day highly elongated orbit, and only able to capture a thin slice of Jupiter during flyby, it is a remarkable coincidence,” wrote Foster at the ASSA website.

The Juno images “show fascinating structures within the storm system that is already causing excitement within the planetary science community,” wrote Foster. Another view of the new spot, as seen by Juno. (Image: NASA/JPL/SwRI/MSSS/Clyde Foster)

Known as a “convective outbreak,” Clyde’s spot is a plume of cloud extending up above the cloud layers. Such features are easily detectable in methane wavelengths, appearing as bright splotches. According to NASA, convective outbreaks are not uncommon within Jupiter’s South Temperate belt, including one that appeared in this latitude band two years ago.

Juno will be making another perijove on 25 July 2020, at which time NASA will get another close-up view of this storm, so we’ll get to see how this outbreak has changed over the days and weeks since its initial discovery.