I live for all things pink, and there’s something beautiful about pink glacial ice. However, the dusty pink layer atop the Presena Glacier in the Italian Alps is more sinister than it looks. Algae has dyed the snow a bizarre colour. The otherworldly look could end up speeding up the melt of snow and glaciers in the fragile mountain region.

Pink snow is usually a spring and summer phenomenon, requiring the right amount of light, warmth, and water to grow. Usually, the algae are inactive while under the snow and ice, but once melt season hits, the normally stark landscape bursts with colour.

Biagio Di Mauro, a researcher at the Institute of Polar Sciences at Italy’s National Research Council, told Gizmodo in an email that the bloom on Presena Glacier is an example of Chlamydomonas nivalis, a type of algae found in the Alps as well as polar regions from Greenland to the Antarctic. It’s more commonly referred to as watermelon snow, and it could be having an impact on snowmelt.

That’s because the whiter the snow, the more effective it is at bouncing the sun’s rays back into space, keeping things cool. Global warming is already doing enough harm to polar and mountain regions without algae coming and making it all the worse. A study published last year showed that up to half of the Alps’ glaciers could disappear this century as temperatures rise. While there’s been a bit of research into how much snowmelt the algae blooms actually cause, more is needed to dig deeper into its full impacts on snow and ice as well as if blooms will be more likely to occur as the planet heats up.

“Less solid precipitation during winter and higher air temperatures during spring and summer are expected to favour the formation of snow- and glacier-algae,” Di Mauro said, noting there’s “little information on this aspect.” 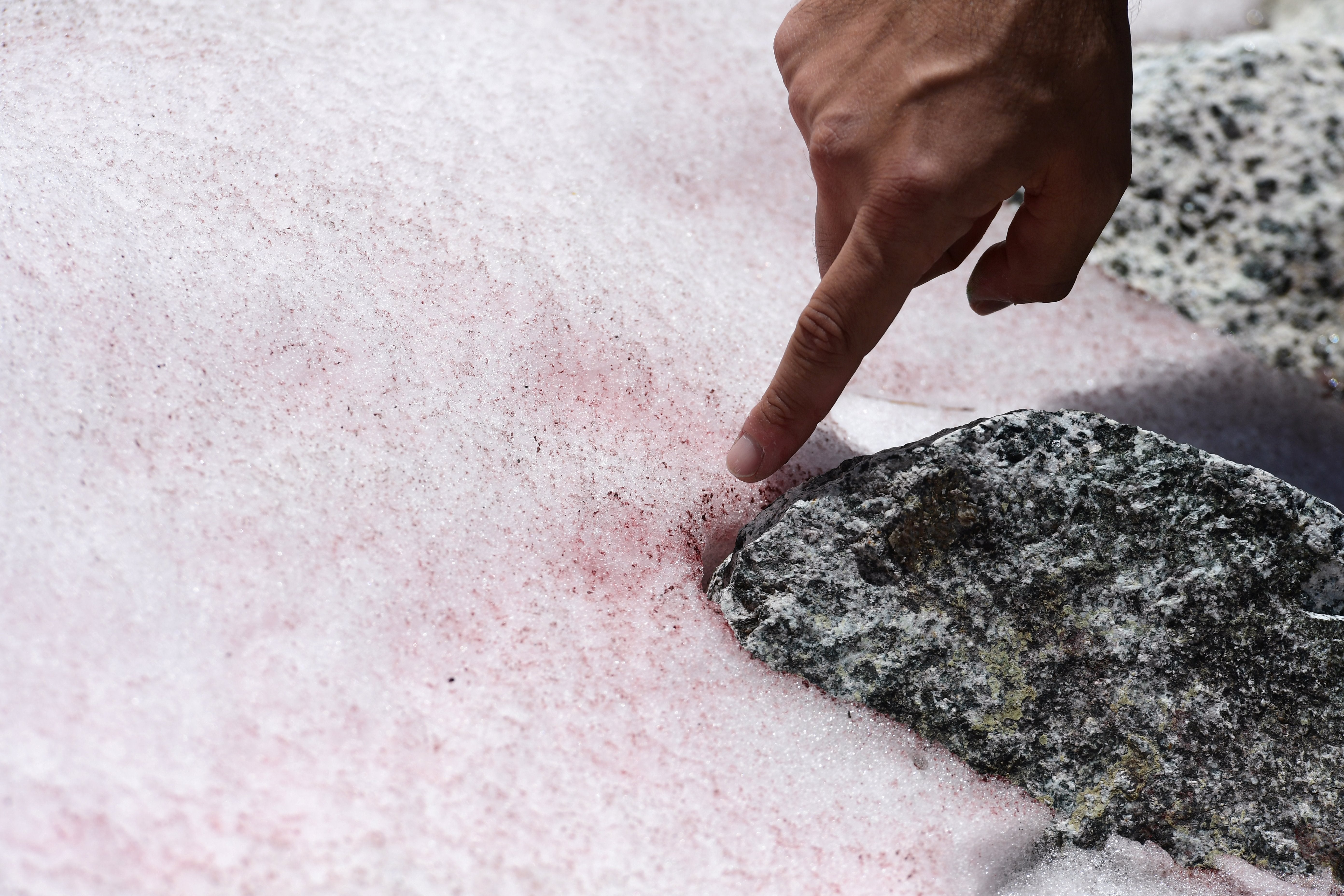 Biagio Di Mauro points to the pink snow on 4 July 2020, on the top of the Presena Glacier near Pellizzano. (Photo: Miguel Medina/AFP/Getty Images)

The Presena Glacier watermelon snow bloom is hardly alone this year. Just a few weeks ago, the US state of Alaska saw some pink snow. In March, Ukranian researchers on Galindez Island off northern Antarctica witnessed a similar event – though the ice was definitely more on the red and bloody side. Research published earlier this year also documented weird green algae blooms in another part of the continent, though scientists are still understanding how climate change may affect the frequency and location of these algae blooms.

Algae isn’t the only problem for snow and ice either. Last year, New Zealand glaciers turned pink as a result of smoke from the bushfires in neighbouring Australia. Ash plays a similar role to the algae, absorbing more heat and melting more ice and snow.

Some scientists have argued that this mechanism needs to be added into climate models so that we can have a clearer understanding of how all this pink and red algae might further global warming into the future. This pink snow might be a sight to marvel at, but it’s doing the Earth no good. 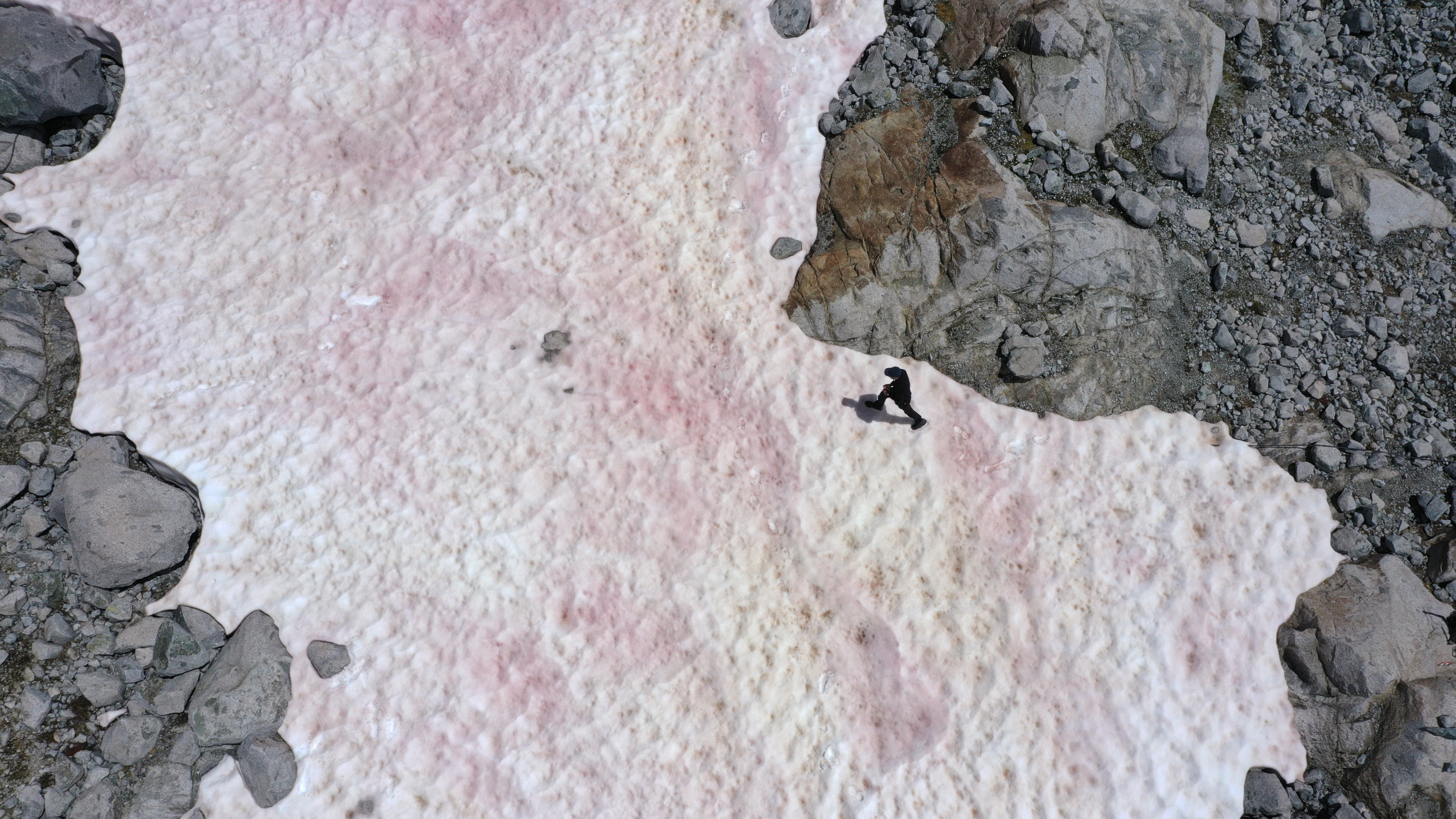 An aerial shot shows someone walking over the pink snow atop the Italian Alps on 3 July 2020. (Photo: Miguel Medina/AFP/Getty Images)