New research shows how some deep-sea fish, with their specialised, ultra-black skin, are able to avoid detection even in the presence of light.

Certain black-skinned fish, like dragonfish and fangtooth, are capable of absorbing more than 99.5% of light that reaches them, according to new research published today in Current Biology.

So even in the presence of bioluminescent organisms, these ultra-black fish can avoid detection, appearing as vague silhouettes with indiscernible forms. As the new research shows, this extreme form of camouflage is made possible owing to the shape and configuration of highly specialised structures on the fishes’ skin.

“If you want to blend in with the infinite blackness of your surroundings, sucking up every photon that hits you is a great way to go,” said Karen Osborn, a co-author of the new study and a research zoologist at the Smithsonian National Museum of Natural History in the US, in a Smithsonian press release.

Osborn became interested in ultra-black fish after she tried to photograph some specimens. Regardless of how she set up the camera or lighting, “they just sucked up all the light,” she said.

To better understand this stealthy trick, Osborn, along with co-author Sönke Johnsen from Duke University, embarked on expeditions to Monterey Bay and the Gulf of Mexico. At these locations, the team used trawling nets and a remotely operated sub to capture dozens of ultra-black fish at depths reaching a mile.

With a spectrometer, the researchers measured the amount of light reflecting off their skin, which is among the blackest organic materials now known. Incredibly, these fish reflect less than 0.5% of the light that reaches them, making them practically invisible even when in the presence of bioluminescent light. Equipped with this ultra-black camouflage, the fish appear around 20 times darker than ordinary black objects, allowing them to avoid detection at close distances. 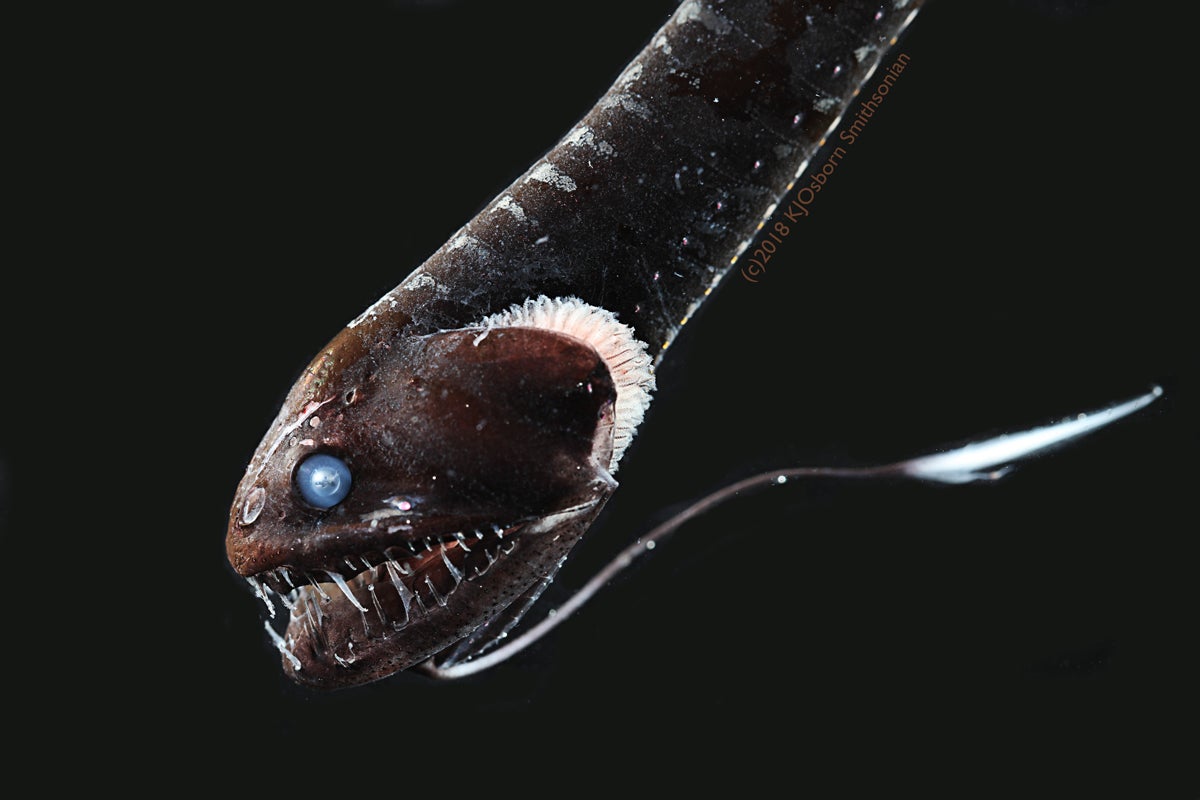 The Pacific blackdragon (Idiacanthus antrostomus) – the second-blackest fish studied – combines its ultra-black camouflage with a bioluminescent lure, which attracts prey. Without their ultra-black skin and transparent, anti-reflective teeth, the glowing lures would frighten prey away, according to the scientists.

The researchers identified a total of 16 species with this ultra-black skin, including a tiny anglerfish capable of absorbing 99.96% of incoming light, which is nothing short of astounding. With so many species having ultra-black skin, this is a good example of convergent evolution at work, in which unrelated species evolve identical traits.

“Ultra-black arose more than once across the fish family tree,” said Alexander Davis, a biology PhD student from Johnsen’s lab and the first author of the study, in a Duke press release.

Ultra-black skin, as the new research shows, is made possible by specialised melanosomes – tiny packages of pigment, called melanin, within the fishes’ skin cells. The shape of these particular melanosomes are unique compared to those found in ordinary black fish. Peering through these structures with an electron microscope, the researchers saw that the ultra-black melanomes were shaped like Tic Tacs, compared to the tear-drop shape found in regular black skin.

“Effectively what they’ve done is make a super-efficient, super-thin light trap,” said Osborn. “Light doesn’t bounce back; light doesn’t go through. It just goes into this layer, and it’s gone.”