A team of neurologists are raising a red flag over risky and unproven stem cell therapies. Their new study suggests that their fellow doctors are frequently asked about these controversial procedures by desperate patients. Many doctors are also seeing patients with serious complications from stem cell therapy, including seizures, infections, and spinal tumours.

Stem cells are the raw material that our body uses to replace other damaged or ageing cells. Scientists have been hopeful about the potential to use these cells as a way to surpass the body’s natural regenerative ability and treat currently incurable diseases, including degenerative neurological disorders like multiple sclerosis.

“I’ve had doctors call us and tell us that patients don’t want to report problems with their stem cell treatment.”

But so far, there are only a few proven uses in medicine for stem cells, such as bone marrow transplants to treat certain blood cancers. Most of the evidence for their claimed benefits elsewhere is either limited or entirely lacking. These caveats haven’t stopped the consumer stem cell industry from growing, though, with clinics offering treatments on an experimental basis, often without express approval from the US Food and Drug Administration.

This new study, published Wednesday in the Annals of Neurology, was a survey of over 200 neurologists across the United States, including a third who specialise in multiple sclerosis. Among other questions, the neurologists were asked if they had ever come across patients who had used or wanted to use stem cells to treat their health problems. For those with patients previously given stem cells, they were also asked about any health complications they had seen that were possibly linked to stem cell treatment.

Almost 90% of the neurologists surveyed said they had been asked by a patient or a close family member about stem cells, a rate that was slightly higher for those with patients who had incurable conditions like multiple sclerosis. Many of those conversations involved patients asking for the neurologist’s blessing to go ahead with stem cell therapy. But only 28% of the doctors reported feeling completely prepared to talk to their patients about the topic.

“One of the study’s points is that these discussions are happening in more than 90% of every outpatient neurology clinic, but many of the doctors are not ready,” said senior author Jamie Imitola, a neuroscientist at the University of Connecticut who specialises in multiple sclerosis and stem cell research. “And if they’re not fully prepared, then that’s shocking, because these are the doctors that should be up to date.”

Two-thirds of neurologists also said they had treated someone who had already gotten a stem cell therapy, while 25% of respondents said they had come across a patient with complications thought to be related to a stem cell therapy. Some of the specific complications listed have been reported before, but Imitola said the percentage of doctors who reported any at all is much higher than you would expect from the small number of case reports available. It suggests that side-effects linked to these procedures may be more common than previously thought.

“I’ve had doctors call us and tell us that patients don’t want to report problems with their stem cell treatment,” he added. “They feel embarrassed, number one, because they have a complication or two, because they feel they were ripped off.”

The long list of complications reported by doctors in the survey included stroke, paralysis, bloodborne infections like hepatitis C, and several deaths. In two cases, doctors reported the emergence of a tumour along the spinal cord; in one case, the tumour had cells that didn’t seem to belong to the patient, suggesting the donor’s cells had somehow turned cancerous. In other cases, the therapy seemed to worsen the progression of the disease it was meant to treat. Still other patients had spent tens of thousands of dollars on their treatment, with no lasting improvement.

The survey’s findings are limited, especially when it comes to the reported complications, since they’re reliant on the recollection of doctors rather than detailed case reports sourced from the medical records of patients.. But the study points to all sorts of systemic problems, Imitola said. Many of these patients are understandably looking for a miracle, and there’s a growing mistrust of science in general, he noted. That makes the wondrous claims peddled by many clinics selling stem cell therapy look all the more appealing. And it makes the relationship between a doctor and their patient all the more important to get right.

“There is a sense around the country that scientists are hiding new therapies for this or that. That we don’t want people to get stem cell therapy, because there is some ulterior motive,” he said. “The reality is that for us to translate stem cells into something real, it’s going to require a great deal of work. Because, ultimately, we want to provide people the best therapy, the best opportunities.” 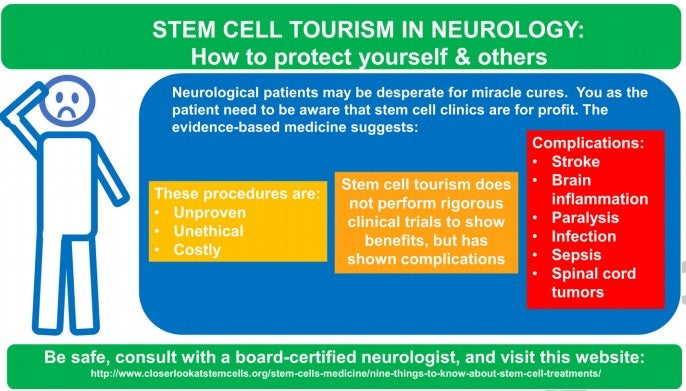 The English language version of the handout created by the researchers, based on their study findings. (Illustration: Julian, et al, Annals in Neurology)

To help neurologists be more prepared to talk about stem cells, the researchers have created a patient-friendly handout based on their findings, translated into 17 languages. Imitola has also set up a patient registry where doctors and patients can anonymously report any possible complications linked to stem cell therapy.