If you’re in the market to buy an ereader, Amazon’s Kindle and Rakuten’s Kobo are really the only two options if you want access to a well-stocked ebook store. The latter has now revealed its alternative to the current cheapest Kindle model with the new £90 Kobo Nia, which includes a high-res display, a backlight, and no ads on the lock screen.

The cheapest Kindle you can currently buy will set you back £70 if you’re OK with Amazon’s feature, which displays ads and sponsored messages on your device’s lock screen whenever it’s in sleep mode. They’re mostly unobtrusive and easy to ignore, but if you’d rather not have Amazon nagging you to buy things while you’re trying to relax with a book, you can buy a Kindle without ads for £10 more.

The new Kobo Nia isn’t subsidised by ads, aside from book suggestions in its online store, which makes it competitive with Amazon’s cheapest ad-free Kindle for £10 more. The device is clearly Rakuten’s attempt to steal potential new customers away from Amazon. If you don’t already have a huge library of Kindle books, it’s a solid choice if you’re just getting started with ereaders, or already have a collection of ebooks in PDF or EPUB formats. 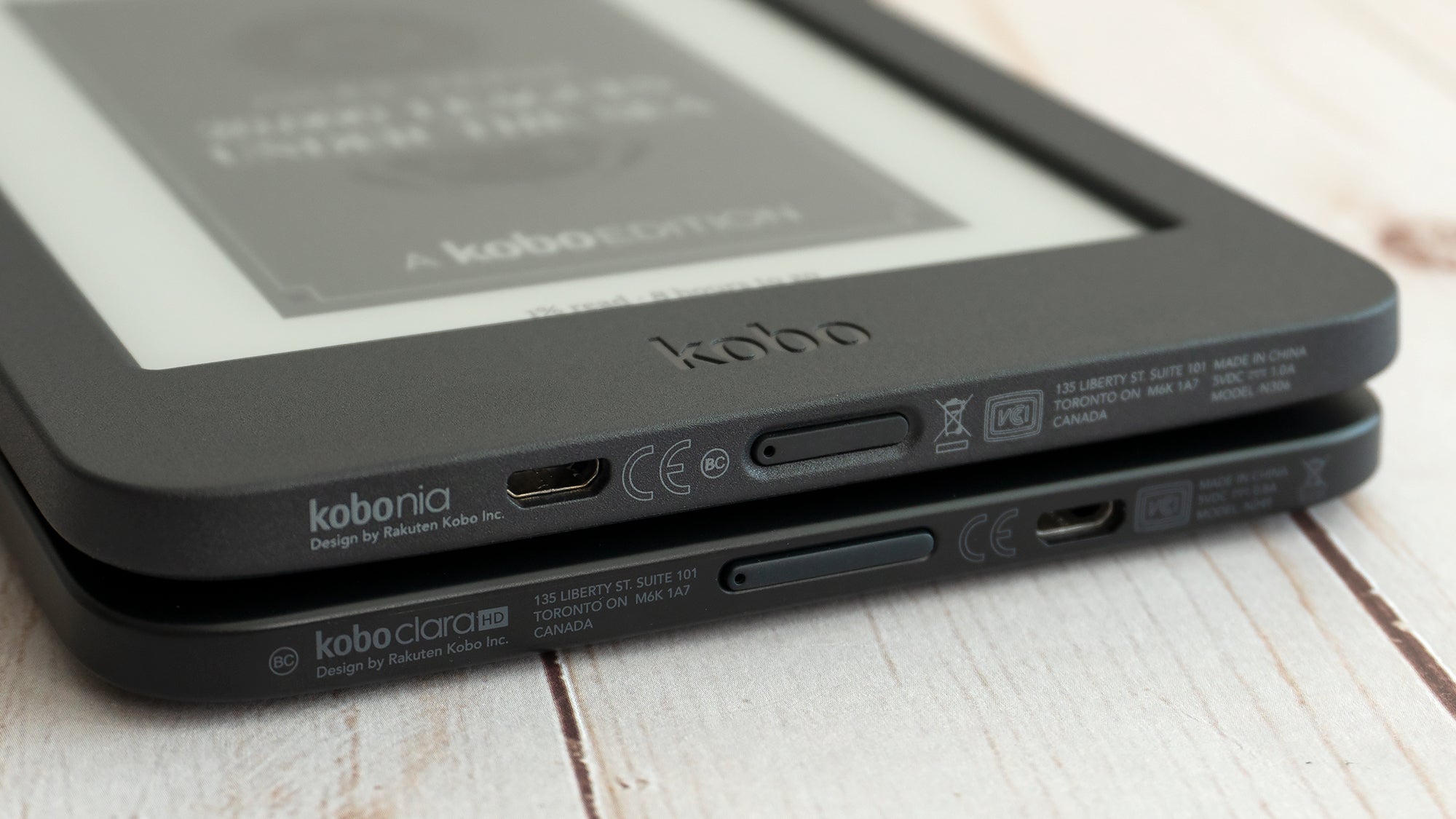 The new Kobo Nia (top) is slightly taller and thicker than the Kobo Clara HD (bottom) but the size differences are negligible. (Photo: Andrew Liszewski/Gizmodo)

Not only is the new Nia competing with the cheapest Amazon Kindle, it’s also competing with Rakuten’s Kobo Clara HD, which offers a few compelling upgrades for just £20 more. With a passing glance it’s hard to tell the Nia and Clara HD apart, aside from cosmetic finishes. But the Nia is slightly taller than the Clara HD, slightly thicker, six grams heavier, and the microUSB charging and sync port (we seriously need everyone on board the USB-C train already) has been repositioned on the bottom of the device. 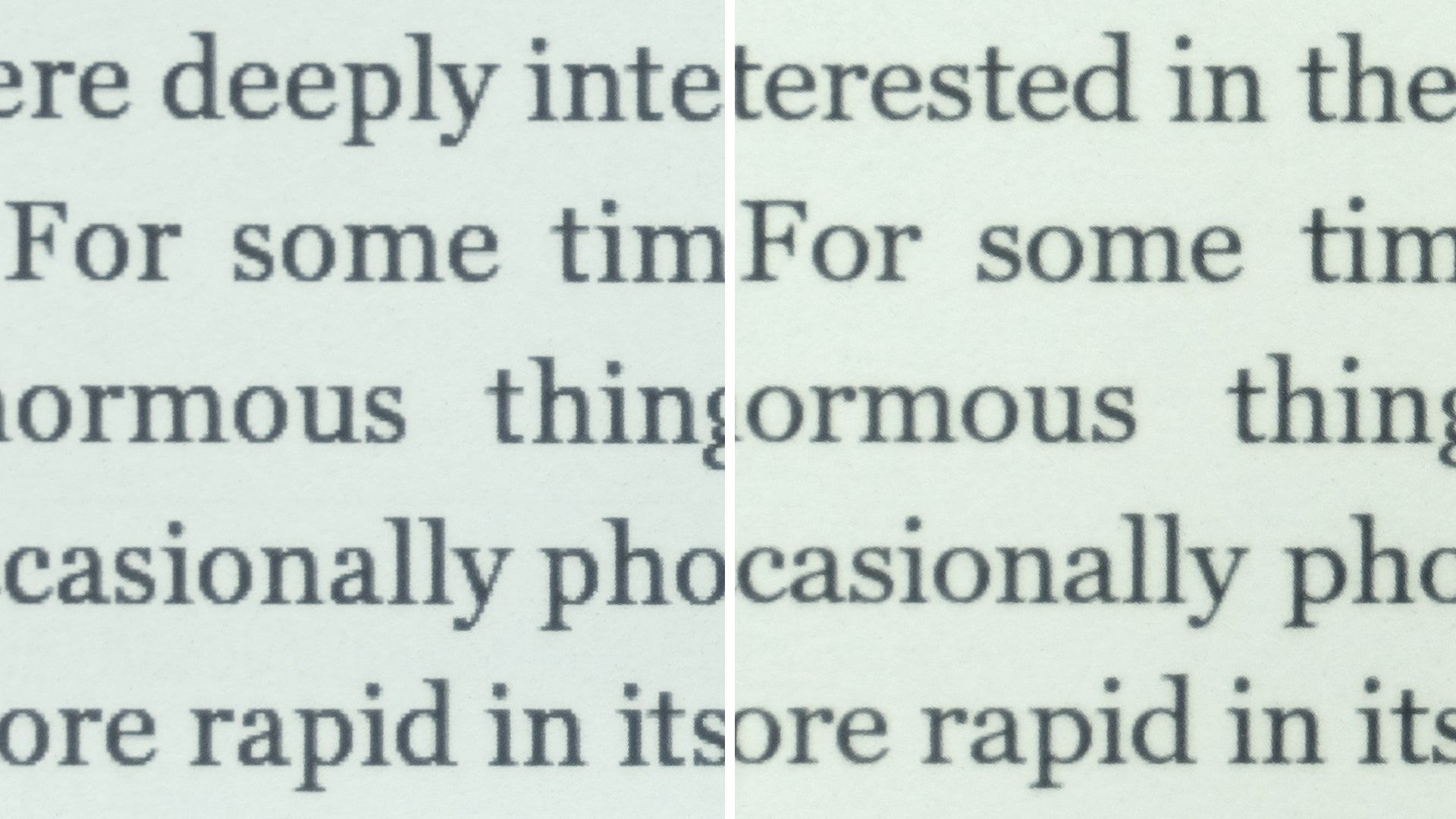 The differences between the Kobo Nia’s (left) 212 ppi screen and the Kobo Clara HD’s (right) 300 ppi screen are very noticeable up close, but less so at a comfortable reading distance. (Photo: Andrew Liszewski/Gizmodo)

The differences between the Kobo Nia and Clara HD are more apparent when you power on the ereaders and place them side by side. The Clara HD boasts E Ink’s current top-of-the-line, 6-inch Carta epaper display with a 300 pixel-per-inch (ppi) resolution, whereas the Nia uses the same 212 ppi screen that Rakuten used in the Kobo Aura 2 that was discontinued earlier this year. But both offer better resolution than the entry-level Kindle, which has a 167 ppi screen res.

If you zoom in close, there’s definitely a noticeable difference between how smooth letters and fine lines appear on the Clara HD’s screen versus the Nia’s, but at a comfortable reading distance I found those differences mostly negligible unless you’re really looking for them. 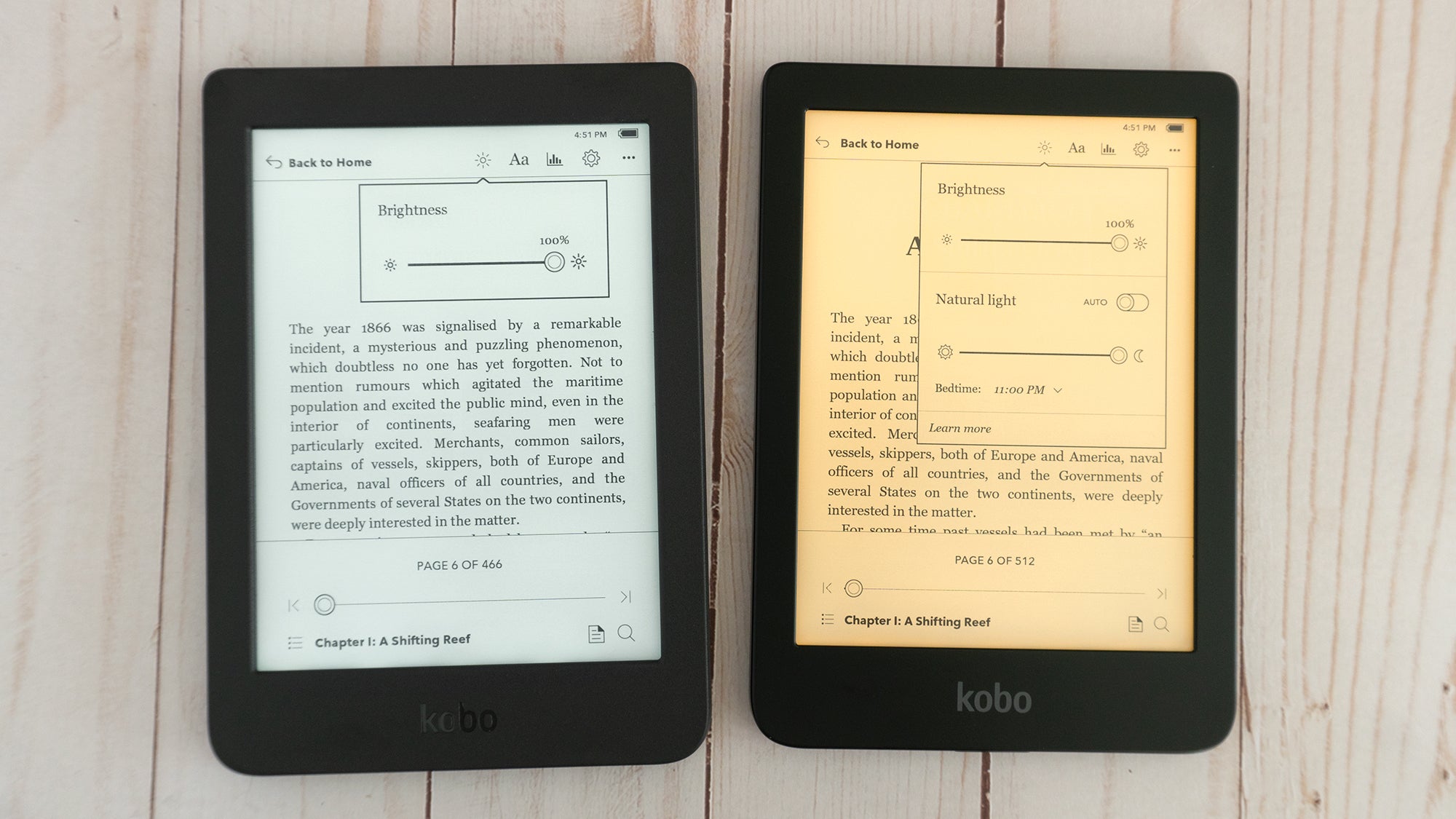 The biggest reason to splurge £20 for the Kobo Clara HD is its backlight, which allows for colour temperature adjustments at night, shifting warmer to help calm your brain. (Photo: Andrew Liszewski/Gizmodo)

If there’s one feature that makes the Kobo Clara HD worth spending an extra £20 on over the new Kobo Nia, it’s the screen’s ability to adjust the colour temperature of its lighting. By now, every smartphone and tablet maker has added automatic adjustment features that tint a screen towards warmer hues in the evening as cooler blue light has been found to increase wakefulness when you’re supposed to be transitioning toward sleep. The lighting for the Kobo Nia’s screen is excellent, and at max brightness it’s even slightly brighter than what the Clara HD can offer, but it’s limited to a very cool shade of white. The Kobo Clara HD’s lighting can be shifted to much warmer shades, which is more pleasant to read in the dark, and, at least in theory, improves your chances of drifting off once you put your book away.

At £90 the Kobo Nia is a tough sell next to the £110 Kobo Clara HD, but as we get closer to Christmas, you can expect the Nia to be the first Kobo to be discounted. (Photo: Andrew Liszewski/Gizmodo)

The Kobo Nia works with an optional collection of faux leather book-style cases available in either blue, black, or yellow. But unlike the cases for the Kobo Clara HD, they don’t double as hands-free stands. (Photo: Andrew Liszewski/Gizmodo)

If you’re only just getting started with ereaders, the new Kobo Nia is a solid place to start. The Rakuten online book store more or less matches what’s offered by Amazon when it comes to major book releases, but you’ll want to take a minute or two to confirm that your favourite authors are available on the platform. If you prefer to bring your own ebooks, however, the Kobo has long offered support for a wider variety of file formats compared to the relatively locked-down Kindle.

But with the Nia’s £90 launch price, you’re probably better off spending an extra £20 for the Kobo Clara HD, which gets you a slightly better screen, much better lighting, and an optional case that can double as a hands-free stand. But as we get closer to the holidays, there’s little doubt the Nia will be the first Kobo device in Rakuten’s current lineup to be discounted, and if the company knocks it down by even £20, it will be a compelling alternative to the cheapest Kindle and the pricier Kobos.