A lot of gaming phones fail to differentiate themselves from standard smartphone fare. But that’s not a problem for Asus’ new ROG Phone 3, which has massive specs, in your face RGB lighting, and possibly the most responsive performance I’ve ever experienced in a phone.

While I’ve only had the chance to use the phone for a couple of days, the ROG Phone 3's unapologetically gamer-focused design is actually kind of endearing. With a 6.59-inch AMOLED screen, the ROG Phone is already huge even by today’s standard, but because the ROG Phone 3 also has good old bezels above and below its screen, it feels even bigger than it is. And weighing in 0.53-pounds, the ROG Phone 3 is also one of the heaviest phones on the market.

Around back, Asus has once again included its signature ROG logo, which gets full customisable RGB lighting along with some abstract lines that are probably supposed to remind you of a circuit board or something, plus dual rear cameras. New on the ROG Phone 3 is a clear section that lets you see the phone’s built-in wind tunnel that’s designed to work with Asus’ add-on cooling fan (more on that later), with Asus even having the gall to write AERODYNAMIC SYSTEM under the glass so there’s no mistaking what it’s for. It’s such an unnecessary flex that you kind of have to love it – the phone’s design is almost an affront to the super sleek phones that mainstream device makers like Apple and Samsung have been pushing out. 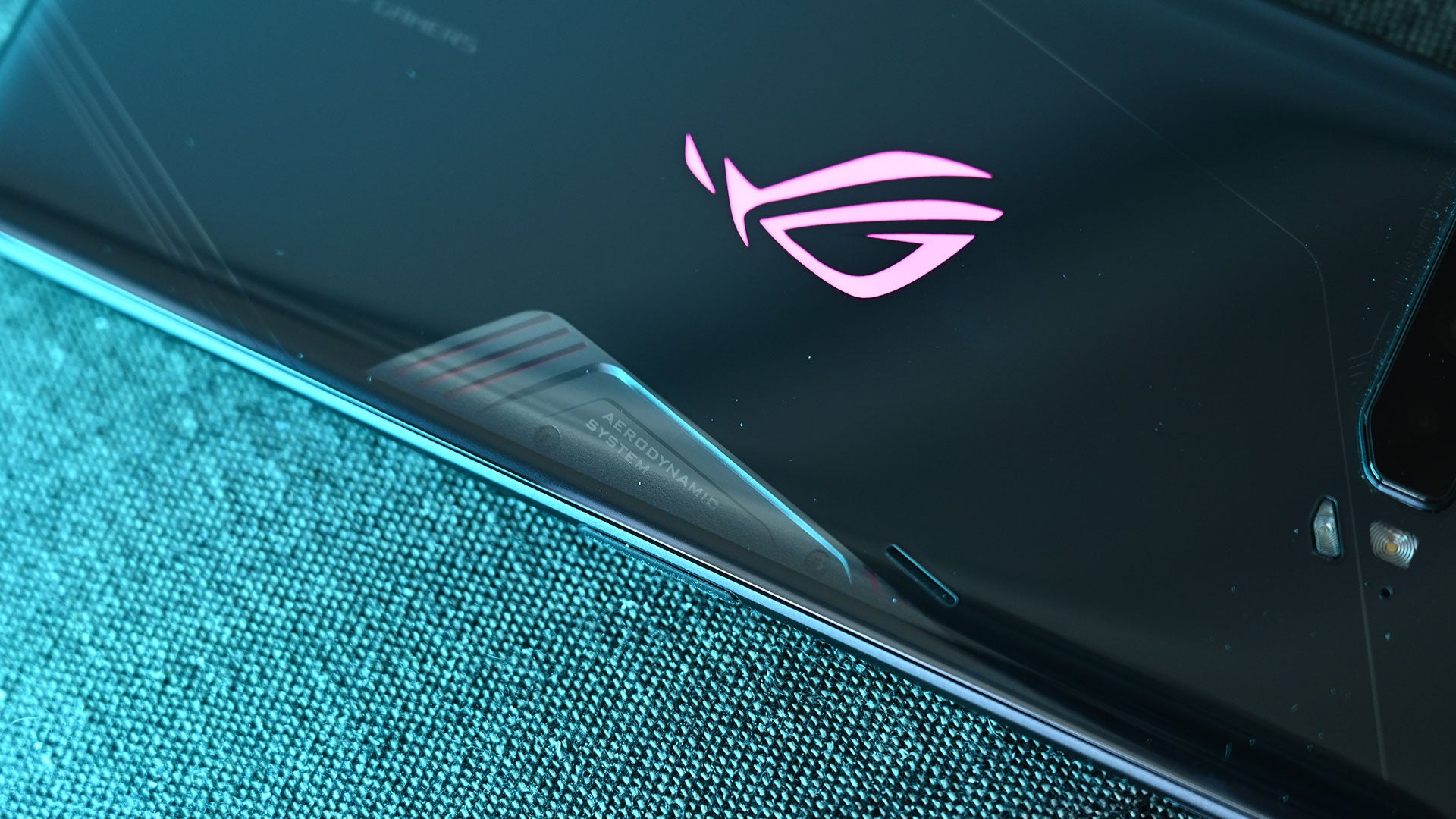 One of the first things you do when setting up the phone is to set the squeeze force level you can easily activate X Mode and get the phone’s full performance. (Photo: Sam Rutherford/Gizmodo)

That said, all the neon lights and vents in the world don’t mean much if the ROG Phone 3 doesn’t have the performance needed to back up its design, which it does. Not only is the ROG Phone 3 powered by Qualcomm’s new Snapdragon 865+ 5G processor, which Qualcomm claims offers 10% better graphics and performance than a vanilla Snapdragon 865 chip. For 2020, Asus also upped the ROG Phone 3's refresh rate to 144Hz while also reducing the screen’s touch latency to just 25ms. From the moment you pick the phone up, the effects of all that speed are instantly recognisable because it feels like the phone responds instantly to anything you do, regardless of if its a simple gesture or launching an app.

As for its gaming cred, I really appreciate what Asus has done to support using the phone in landscape mode. Instead of using weak bottom-mounted speakers, the ROG Phone has true front-firing stereo audio that pumps out some serious volume. This thing is loud. But even more importantly, in addition to the usual USB-C port on the bottom, Asus also includes a USB-C port on the side of the phone, which would be on the bottom if you’re holding the phone sideways. That means you can easily plug in a pair of headphones or a charging cable while gaming without any cords getting in the way of your hands.

However, the ROG Phone 3 doesn’t really hit its true potential until you attach its included GameCool 3 accessory, which adds a fan for extra cooling along with a handy 3.5mm audio jack, a pass through USB-C port, and even a kickstand. Now I admit that putting a fan on a phone is probably more style than function, though Asus says the fan can lower the ROG Phone 3's surface temps by up to 8 degrees Fahrenheit, that little fan also helps keeps your hands dry, which is something that big time mobile gamers would appreciate.

But perhaps my favourite new addition to the ROG Phone 3 are the new pressure sensors built into the side of the phone. We’ve seen other devices like Pixel phones use similar tech before, typically to do things like summon the Google Assistant. But on the ROG Phone 3, Asus has set up its pressure sensors to activate X Mode, which not only turns on the phones RGB lighting, it also enables the phone’s high-performance profile while also changing the phone’s default background from blue to red. It’s pure cyberpunk silliness and it’s awesome. 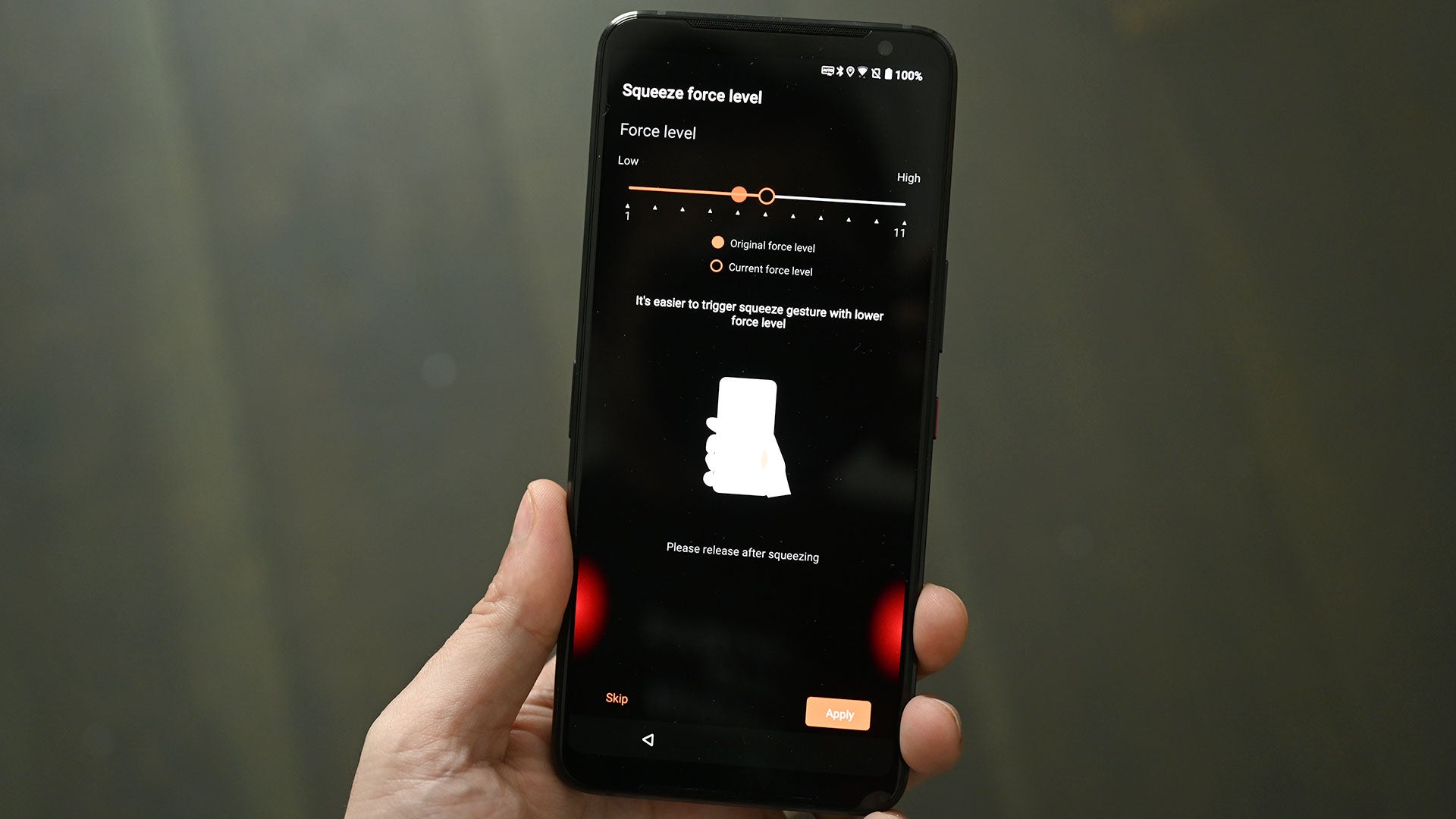 One of the first things you do when setting up the phone is to set the squeeze force level so you can easily activate X Mode and get the phone’s full performance. (Photo: Sam Rutherford/Gizmodo)

Meanwhile, when it comes to playing games, Asus has partnered with ultrasonic component maker Sentons to improve the phone’s AirTriggers, which serve as customisable touch-based shoulder buttons. The big upgrade for the ROG Phone 3 being that the triggers can detect both touch and swiping gestures, and each trigger can be divided into two different buttons in case you need four buttons instead of just two.

If that’s still not enough, the ROG Phone 3 supports fully customisable on-screen controls that work across almost every game. The ROG Phone 3 is also one of the first phones I’ve used that has Google Stadia pre-installed, which is an interesting move as it suggests that third-party device makers are starting to really embrace the idea of cloud-based gaming on the go. 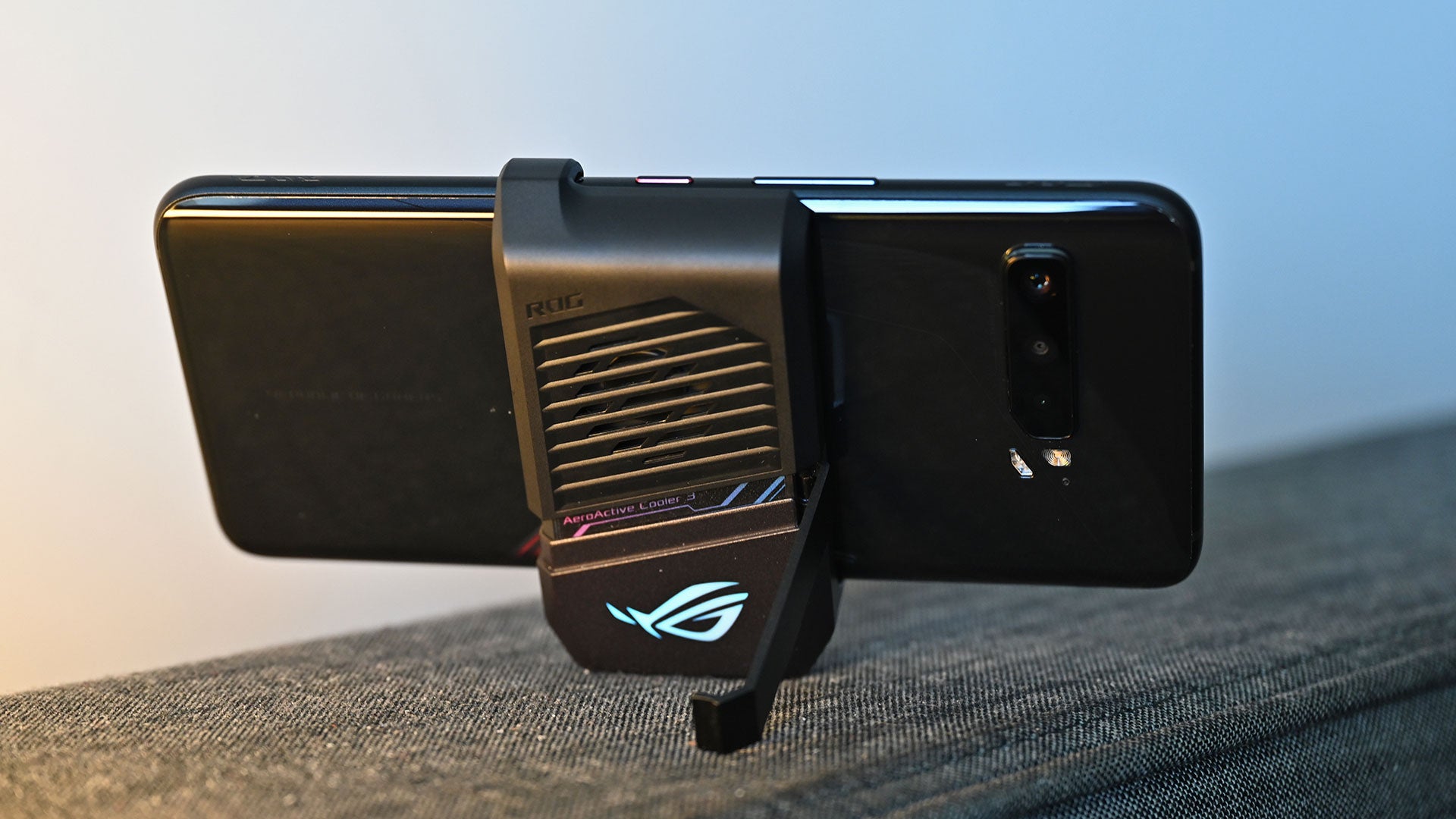 One of the first things you do when setting up the phone is to set the squeeze force level you can easily activate X Mode and get the phone’s full performance. (Photo: Sam Rutherford/Gizmodo)

Finally, anchoring all this tech is a giant 6,000 mAh battery that Asus is the absolutely largest capacity powerpack it could jam inside the ROG Phone 3 without making it bigger. To give you a sense of how much juice that is, the Galaxy S20 Ultra (which is a massive phone in its own right), only offers a 5,000 mAh battery. Furthermore, Asus has also included special low-voltage charging mode and enhanced heat regulation to make sure that even with heavy use and multiple charging cycles, the ROG Phone 3's battery health shouldn’t degrade as quickly as other phones.

Look, I know the ROG Phone 3 isn’t for everyone, but in a way that’s what makes it so special. It’s made for the kind of hardcore mobile gamers that crave higher refresh rates and built-in trigger buttons. It’s got beastly specs, a monstrous battery life, and a design that aggressively ties everything together, and I’m looking forward to spending more time with to really get a sense of how it performs in the real world. 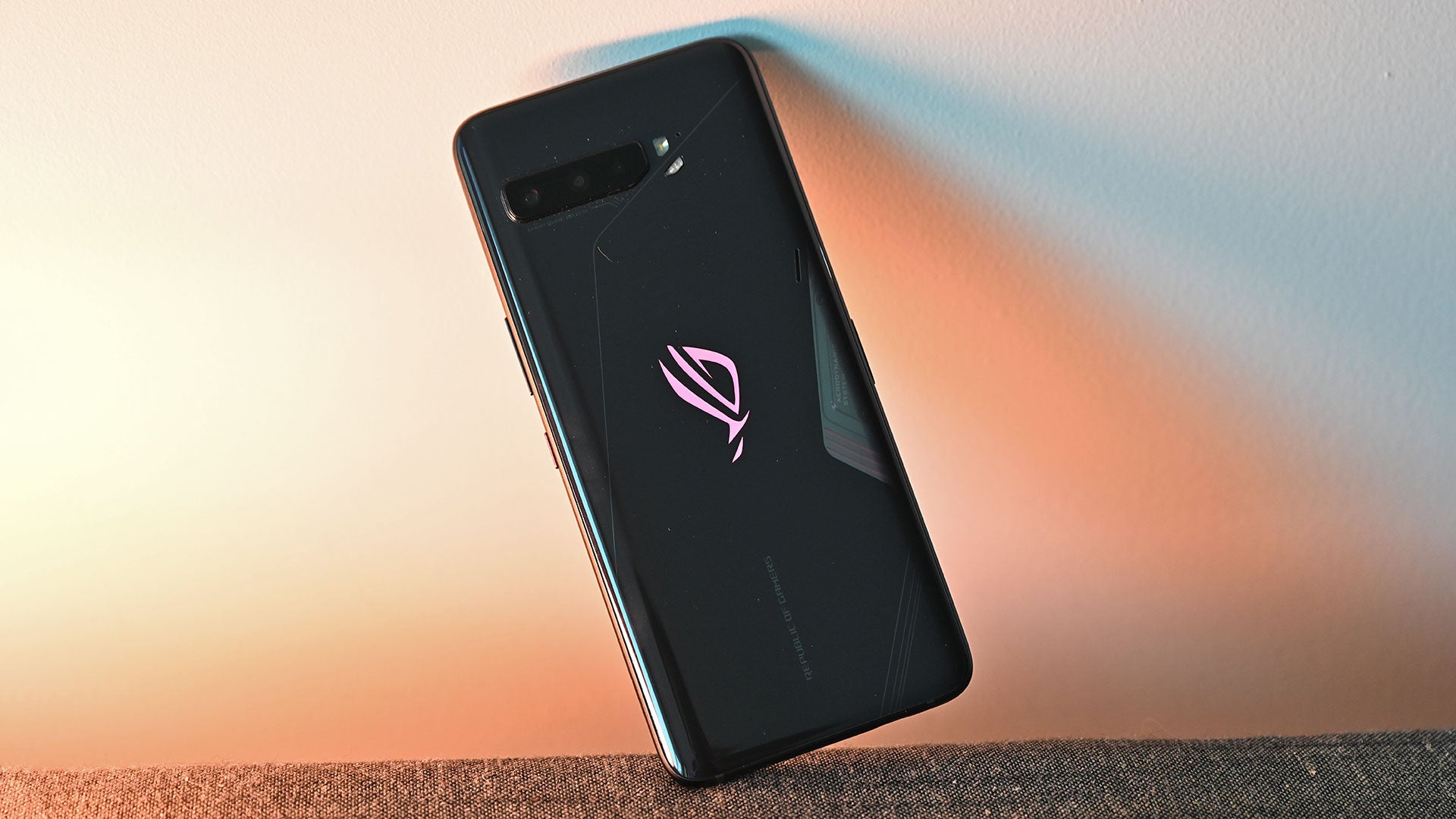 Unfortunately, this thing probably won’t be cheap, because while Asus has yet to reveal official pricing, it’s expected to cost about the same (or maybe a little more) than last year’s ROG Phone 2, which launched at £829. It’s also unclear when this thing will actually be available either, with Asus only saying to stay tuned for more info sometime in September.