For years I’ve considered the Razer Blade 15 to be the closest thing you can get to a MacBook Pro for gamers. Sure, it doesn’t run macOS, but no other non-Apple computer does either, at least not legally. Like a MacBook Pro, the Razer Blade 15 has an understated, minimalist design and excellent build quality, but it also comes with some tasteful gamery additions like per-key RGB lighting and a bevy of ports. And now for 2020, the updated Razer Blade boasts even better performance thanks to a refreshed range of CPUs and GPUs, more sophisticated cooling options, and displays that go up to 300Hz. So while it ain’t cheap, the Razer Blade is one of the most well-built and well-equipped gaming laptops you can get right now.

What is it?: A premium 15-inch gaming laptop

Look, there’s no mincing words, that’s a helluva lot of money for a laptop, but if you want something that is just so choice, the Blade 15 is an exceedingly good general purpose and gaming machine. Similar to a MacBook, the Blade 15 sports an all-aluminium chassis with clean lines, a large touchpad, and lots of ports. The whole thing feels incredibly sturdy. Some sections of laptops tend to be flimsy and flexible on lesser devices, but when you press on sections like the frame of its keyboard the Blade 15 barely has any give.

Along the side of the laptop, Razer includes enough ports that you’ll practically never need to carry a dongle around. On the left, there are two USB 3.2 Type-A ports, one USB 3.2 Type-C port, and a headphone jack, while on the right you get HDMI, another USB 3.2 Type-A port, one Thunderbolt 3 port, and even a full-size SD card reader. This gives you plenty of connectivity, and as someone who spends a lot of time transferring data between my camera and PC, I really appreciate that Razer included a built-in card reader. 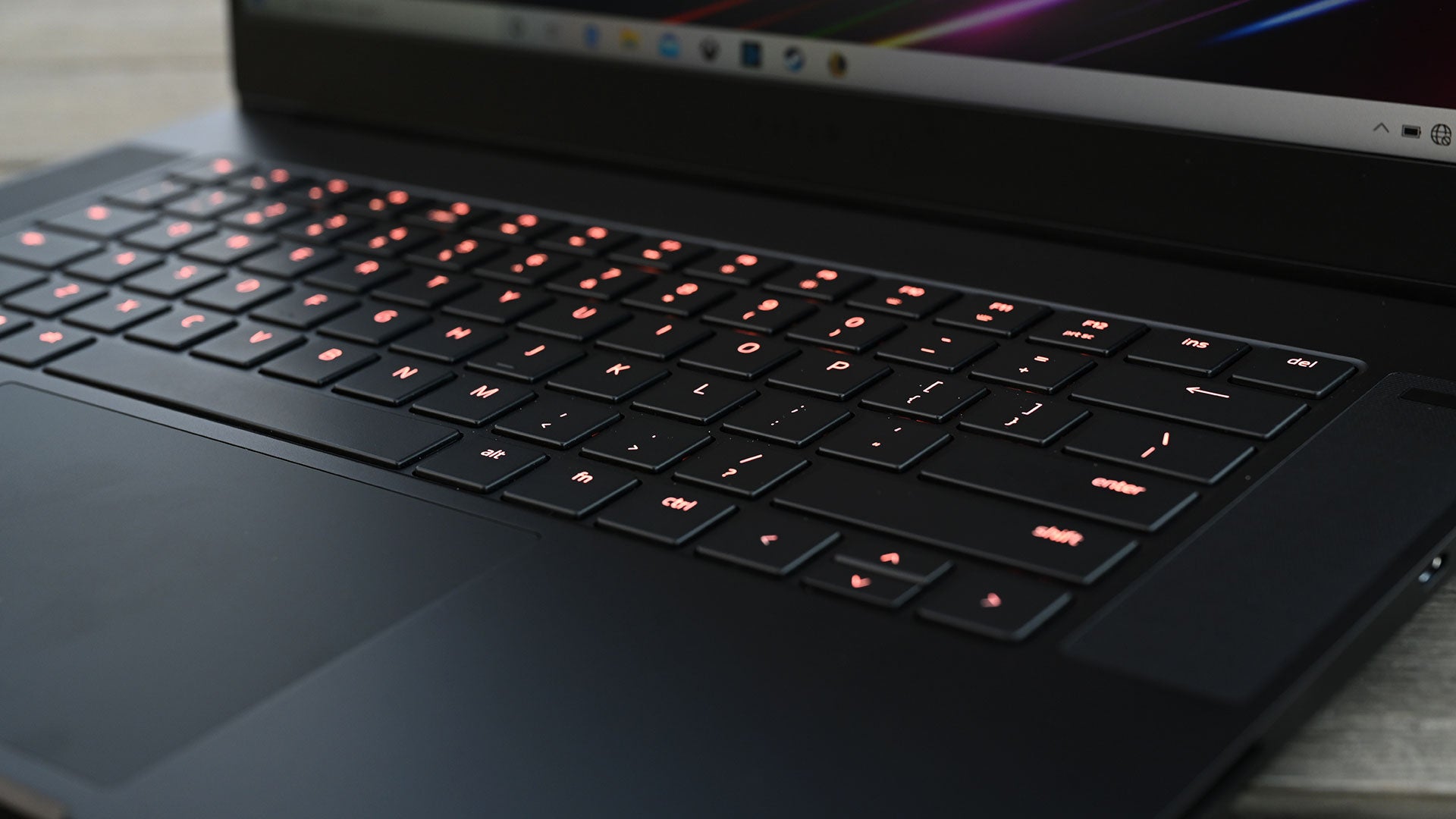 As for the keyboard, that’s one thing I’m glad Razer hasn’t messed with because it didn’t need fixing. On the Advanced model, you get full per-key RGB backlighting, with keys offering a fair bit of travel and a light, but bouncy feel.

The real upgrades come on the inside, with our review unit featuring an Intel Core i7-10875H CPU, 16GB of RAM, a 1TB SSD, and an Nvidia 2080 Super Max-Q GPU. Aside from potentially trying to shoehorn a Core i9 chip in here as MSI did with the GS66 Stealth, this is essentially as fast as you can make a thin-and-light gaming PC, which is what you’re going to need if you want to take full advantage of that 300Hz display.

Take a look at these close up pics of the Blade 15's chassis and design. (Photo: Sam Rutherford/Gizmodo)

However, when you play a less demanding esport-focused game like Overwatch, where getting all those frames might make a difference, the Blade 15 shined delivering 275 FPS at 1920 x 1080 on high. And after a few minor settings tweaks, I was able to get a quite stable 300 FPS, which is what you want if you’re truly trying to gain that extra little competitive advantage.

As for the screen itself, the Blade 15's 300Hz display features a matte coating to help cut down on glare and reflections, while a colour gamut that covers 100% of the sRGB spectrum looks fine, though it definitely doesn’t deliver the more vivid colours you’d get from Razer’s optional OLED panel. The one small con about the Blade 15's screen is a max brightness that topped out at just 333 nits, which is fine, but a bit short of the 400 nits or more you’d like to see on a system this expensive.

The Blade 15's other small concern is that even with the special vapour chamber cooling system that comes on the Advanced model, because of the placement of its fans, the bottom of the laptop can still get a bit toasty under full load. It kind of goes without saying that you probably shouldn’t settle in for a long gaming session with a laptop resting on your legs and groin. I wouldn’t say its truly painful, but actually gaming on your lap isn’t very comfortable either. If you're dead set on gaming like that, you’ll probably want to go with a less demanding or more casual title.

When it comes to battery life, with a time of 5 hours and 58 minutes our own video rundown test, the Blade Advanced performed quite well for a system this powerful. The GS66 finished with a very similar time of 5:53 and compared to gaming laptops from a few years ago that struggled to go more than four hours unplugged, it’s nice to see battery lives on gaming laptops going in the right direction. 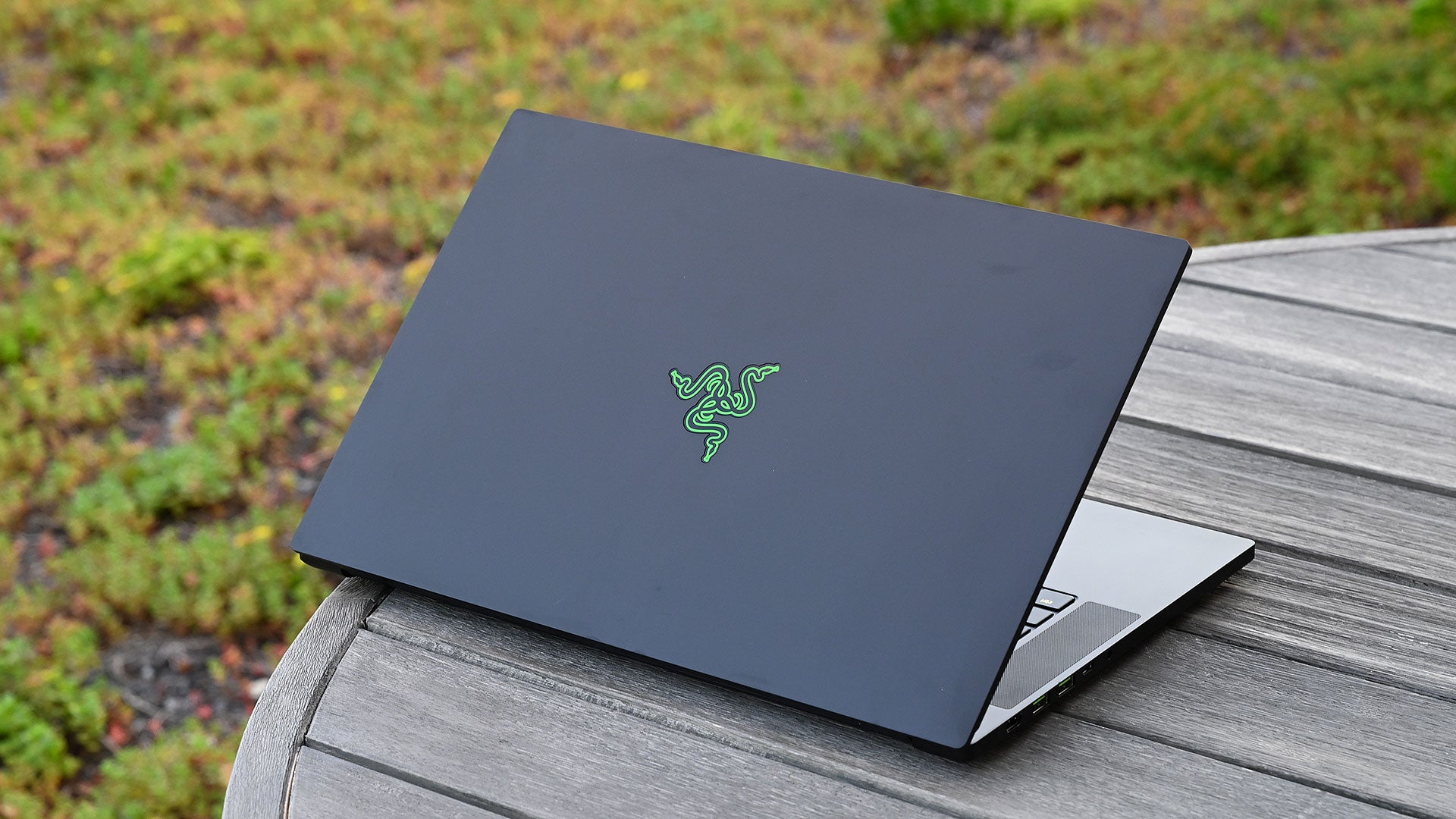 When I was younger, the Blade 15 Advanced is exactly the kind of laptop I dreamed about. It’s got a beautiful build, massive specs, and the kind of silly gamer features, like RGB lighting and a neon green logo, that make it more fun than something like more vanilla, like the XPS 15. But there is that price to consider. Heck, £3,100 is more than I spent building my desktop PC, which isn’t nearly as good looking but does have better performance. So while I’m not sure I’d want to drop this much on a laptop – even one as good as the Blade 15 Advance – as I (and Ferris) said before, if you’ve got the means, it is so choice.