Designers often rely on their smartphones for snapping a quick photo of something that inspires them, but Pantone has found a way to turn their smartphone into a genuine design tool. As part of a new online service, it’s created a small card that can be used to accurately sample real world colours by simply holding the card against an object and taking a photo.

There’s a long list of variables that can affect the colour accuracy of objects in a photo you snap. Say, for example, you spot the perfect red apple and want to use that colour for a corporate logo you’re working on. The amount of light, the colour temperature of the light (which varies greatly indoors and out), the time of day, shadows, and even the internal software your camera uses to translate data from a sensor into an image (assuming you’re not shooting RAW) can affect the colour of that apple in a digital photo. More often than not, when you try to recreate that perfect shade of red using Photoshop’s colour-sampling eyedropper tool, it just doesn’t look as good as it did in real life.

There are existing solutions to this problem. Even Pantone itself sells handheld devices that use highly-calibrated sensors and controlled lighting to sample a real-life colour when placed directly on an object. After sampling, the device lets you know how to recreate it in your design software. The problem is they can set you back well north of £700 if the design work you’re doing is especially colour critical and accuracy is paramount. 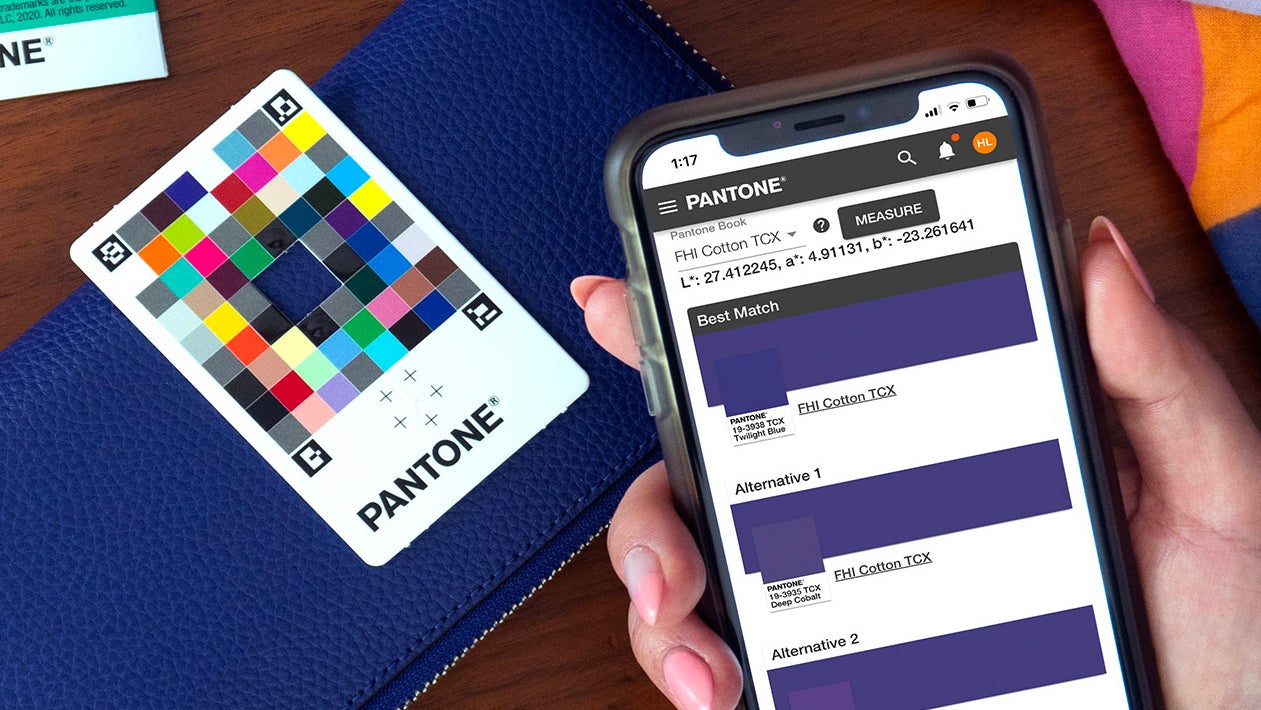 At £16, the Pantone Color Match Card is a much cheaper solution, and it’s one that can be carried in your wallet. When you find a colour you want to sample in the real world, you place the card atop it, with the hole in the middle revealing that colour, and then take a photo using the Pantone Connect app available for iOS and Android devices.

The app knows the precise colour measurements of all the coloured squares printed on the rest of the card, which it uses as a reference to accurately calibrate and measure the colour you’re sampling. It then attempts to closely match the selection to a shade indexed in the Pantone colour archive. The results can be shared to design apps like Adobe Photoshop and Adobe Illustrator using Pantone’s other software tools, and while you can use the app and the Color Match Card with a free Pantone Connect account, a paid account is needed for some of the more advanced interoperability functionality.

The app and the card are not a complete replacement for an expensive handheld colour scanner, however. Pantone points out that the best results will come from photos snapped in well lit places with minimal glare, and the system simply won’t work with colours on metallic or shiny surfaces. Using a flash is also a no-no, and Pantone has a specific list of supported smartphones that work best with the Color Match Card, which so far is limited to just devices from Apple, Samsung, and Google. It can technically be used with any camera-equipped smartphone, but its ability to accurately match the colour you’re trying to replicate to Pantone’s colour library will be hindered.