This Connected Kettlebell Would Be Great If Its App Wasn't Crap

In my shoebox of a flat, I have one yoga mat worth of free space for at-home workouts. This wasn’t a problem before stay-at-home orders were issued. I just made use of my building’s free gym. But since all the gyms – including the one in my building – are now closed, I’ve had to get more creative with strength training.

On paper, the JaxJox KettlebellConnect seems like the perfect at-home fitness gadget for my exact problem. It’s an adjustable kettlebell set that ranges from 12 to 42 pounds, doesn’t take up a whole lot of space, and automatically tracks your workouts via a companion app. Plus, JaxJox has made a series of free kettlebell workouts that you can watch either on Vimeo or in the app itself. It’s kind of a like a Peloton or Tonal for lifting, but minus the installation process and monthly subscription fees.

What is it?: A smart, adjustable 6-in-1 kettlebell

Like: Very well made! No extra subscription for roughly 130 JaxJox workout videos. You only have to press a button to adjust the weights.

Don't Like: Significantly more expensive than most kettlebells on the market. The JaxJox app is outdated.

The KettlebellConnect as a device is pretty straightforward. It’s...a kettlebell. It’s less round than a traditional kettlebell – the shape is more of a column with the standard kettlebell handle on top. That design decision is because the device is actually a hollow shell that accommodates five disc-shaped weights. The KettlebellConnect is also an accelerometer and gyroscope inside its shell to help track movements and reps. These all sit on top of a charging base. You can either store the kettlebell on it all the time, or I guess you could also take it outside to your backyard or a park, because it lasts 14 hours on a charge. The base also has an itty bitty LCD display that tells you the weight it’s currently at, and you can press the ‘+’ or ‘-’ button to make it heavier or lighter in 6-pound increments, depending on your needs. It whirs a bit. A tiny in-progress animation shows up on the display. There’s a locking noise. It beeps. And boom, you’re ready to go.

Overall, the hardware itself is well-constructed. Even during the fiercest of kettlebell swings, I never felt like the grip was going to fly out of my hands – though you can hear the weights jiggle around during more dynamic movements. Thankfully, the locking mechanism was always solid. I did not destroy any furniture in my cramped space, though one time my dog did come very close to being bulldozed into a pancake. (That, however, was not the KettlebellConnect’s fault.)

From a tech standpoint, I was most excited to test the auto-adjusting feature. My main issue with “dumber” adjustable weights is that, depending on the set you use, the pins meant to lock weights in place can be finicky. (The pins on my adjustable dumbbells are not fun! I regret that purchase!) I could pause a workout to adjust them correctly, but running to my computer or my phone messes up my flow – I have to pause the workout video I’m streaming, adjust my weights, and then start everything back up again. On the flip side, if you rush, you might end up with a weight falling off when you go to pick it up – a thing that has happened to me a few times. Auto-adjusting sounds way more convenient. 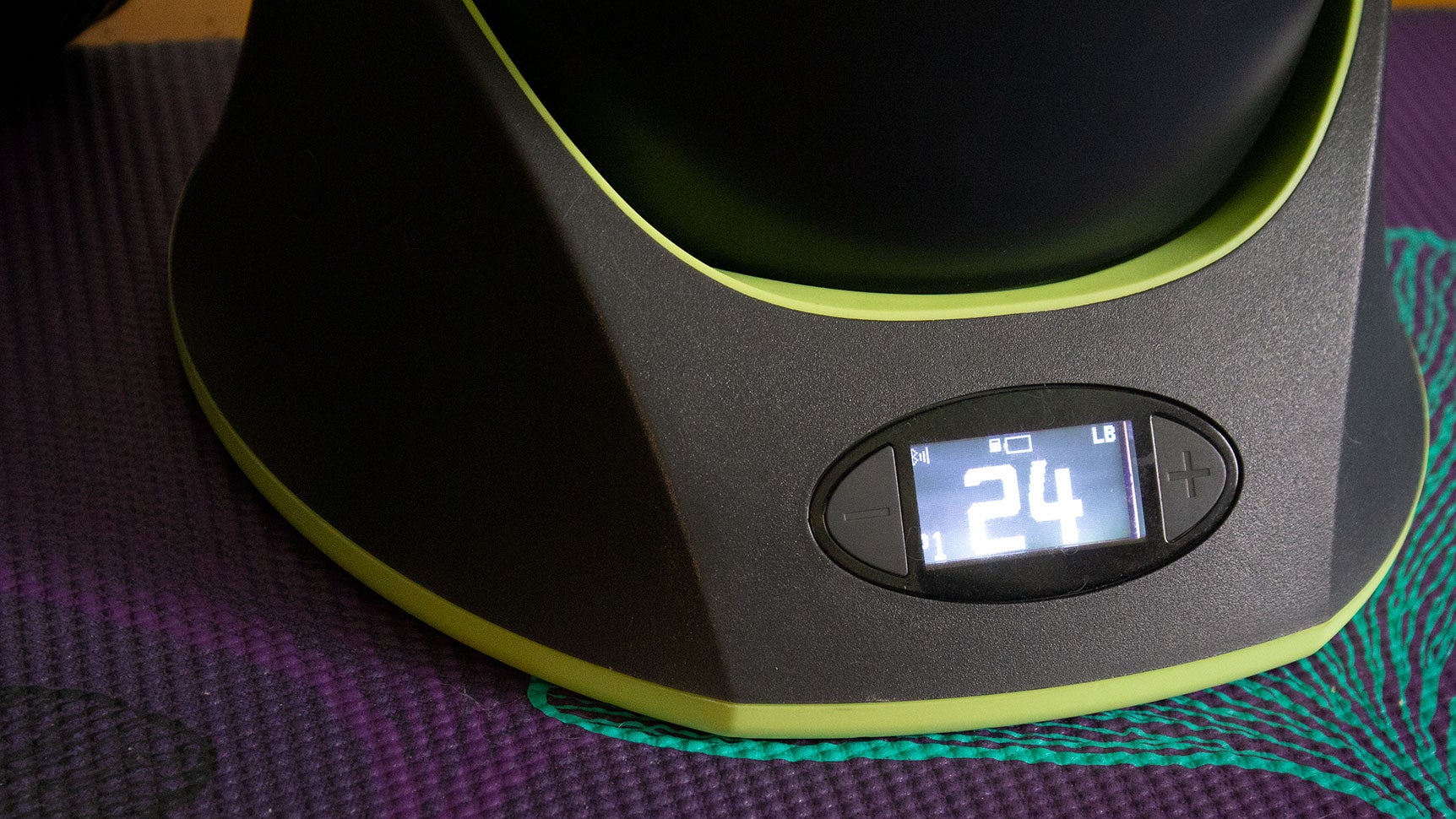 You can adjust with a push of one of the buttons. The LCD screen isn’t anything fancy, but it does the job. (Photo: Victoria Song/Gizmodo)

In practice, the results of automatically adjusting weights at the push of a button are more mixed. While I liked that it was no fuss and easy, it still takes a hot second – especially if you accidentally overshoot or undershoot your desired weight. This isn’t a dealbreaker. It’s simply something you have to factor in when you’re trying to follow along with a guided workout. For freestyle workouts, it’s less of a problem, because you can go at your own pace.

One thing I found limiting was the KettlebellConnect’s size. Traditional, non-adjustable kettlebells are compact even at heavier weights, meaning you have a fairly wide range of movements you can do with them. Because of the KettlebellConnect’s design, you’re always carrying around a honking 16-inch tall and 12-inch wide shell, regardless of whether you’re lifting 12 pounds or 42 pounds. For reference, this 50-pound kettlebell is 12 inches tall and 8 inches wide. The KettlebellConnect’s size is fine for moves like swings, cleans, deadlifts, Russian twists, and goblet squats. However, other moves may require you to modify accordingly. For instance, I had to slightly change my grip for get-ups, and halos with the KettlebellConnect were unwieldy. Also, moves that usually require two kettlebells (like a kettlebell pushup or a two-arm row) were harder for me to modify. That’s fine if you have a set of free weights as an alternative, but it’s a thing to keep in mind if you want this thing to be a one-stop fitness purchase.

The Kettlebell Connect may leave beginners feeling a bit lost, especially if relying solely on JaxJox’s videos to learn moves and form. This brings us to the worst part of the KettlebellConnect: the JaxJox app. 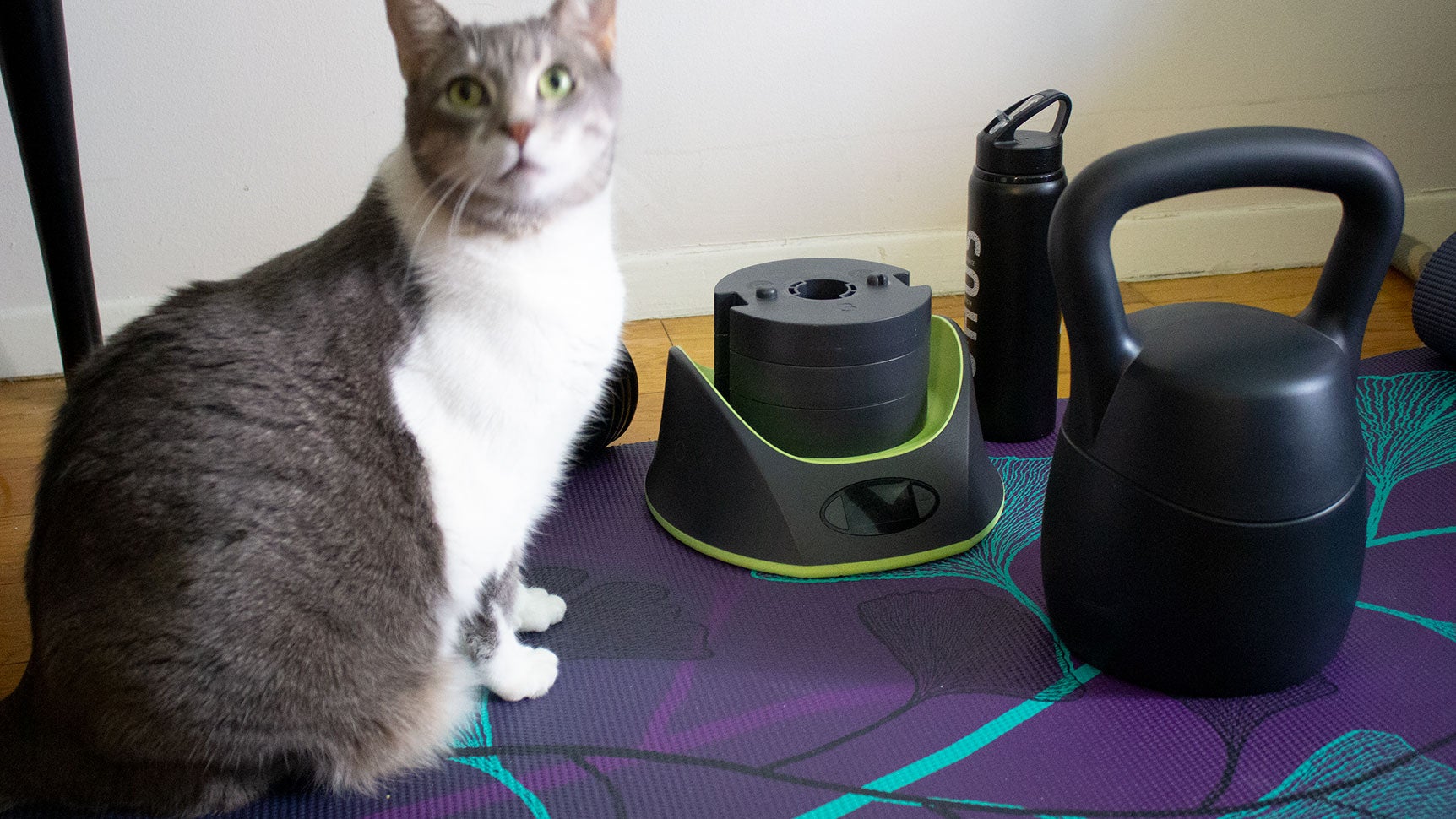 Blurry, uncooperative 18-pound cat for scale. My cat is huge, but so is the KettlebellConnect. (Photo: Victoria Song/Gizmodo)

The JaxJox app looks like it hasn’t been updated in years. The design isn’t what I’d call intuitive. JaxJox’s workout videos, for instance, aren’t the easiest to pull up, and on several several instances, the videos didn’t even load. A few times, the app crashed before it could sync my data from the device. You can set weekly goals, but the way the app is set up assumes you already know what a reasonable target would be. That’s not helpful for newbies, and honestly, I’m not convinced it’s helpful for fitness nerds either. The dashboard is perfectly adequate at displaying reps, sets, total exercise minutes, and average power (the wattage you generate from your workouts, or something like that). But beyond tracking reps and sets, personally I don’t find these metrics all that useful.

JaxJox also offers up a “FitnessIQ” metric that scores you based on peak power, average power, average heart rate, consistency (how many times you work out over a 7-day period), and step count. That seems to be a more useful metric than whatever you get on the dashboard. However, the KettlebellConnect, as you may have noticed, does not measure your heart rate. You’d have to get the JaxJox heart rate monitor. Even though I linked the app with Apple Health – which records my heart rate metrics via the Apple Watch Series 5 – this heart rate data never transferred over. There’s no option for adding, say, my Polar H10 chest strap. As far as integrating third-party trackers goes, you’re limited to Fitbit. 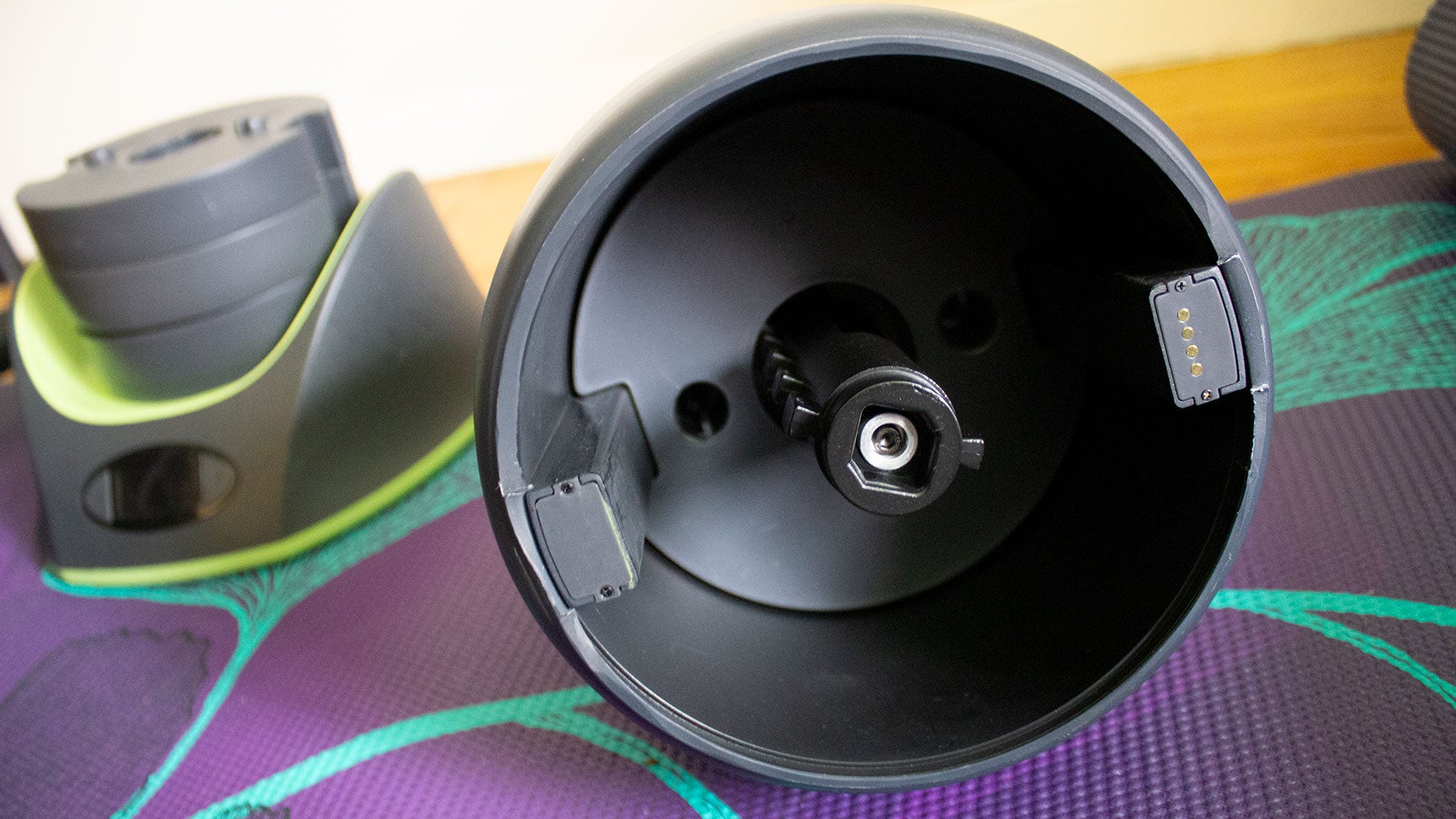 The KettlebellConnect is essentially a shell, so unfortunately it is the same big size regardless of what weight you use. (Photo: Victoria Song/Gizmodo)

I did like JaxJox’s video workouts, though I do have mild reservations. The videos are divided into a few categories: sweat, strong, skills, and chill. The first two are kettlebell-centric workouts; sweat is the cardio-focused option, while strong is more anaerobic strength training. Skills is a set of tutorial videos demonstrating proper form for a few basic kettlebell moves. Chill is irrelevant because they’re primarily videos for JaxJox’s connected foam roller.

All the instructors are upbeat, but not obnoxiously so. The workouts themselves left me sweaty and pleasantly sore the next day. But there’s no real organisation for the roughly 130 videos JaxJox has produced. You can’t sort by duration, instructor, or intensity level. That’s true for both the app and JaxJox’s videos on Vimeo, which I preferred to watching on my phone via a wonky app. It could take you a while to find a workout that fits your particular needs on a day. The upside is these videos don’t cost you extra and it’d take a while to get through them if you were working out once or twice a week. 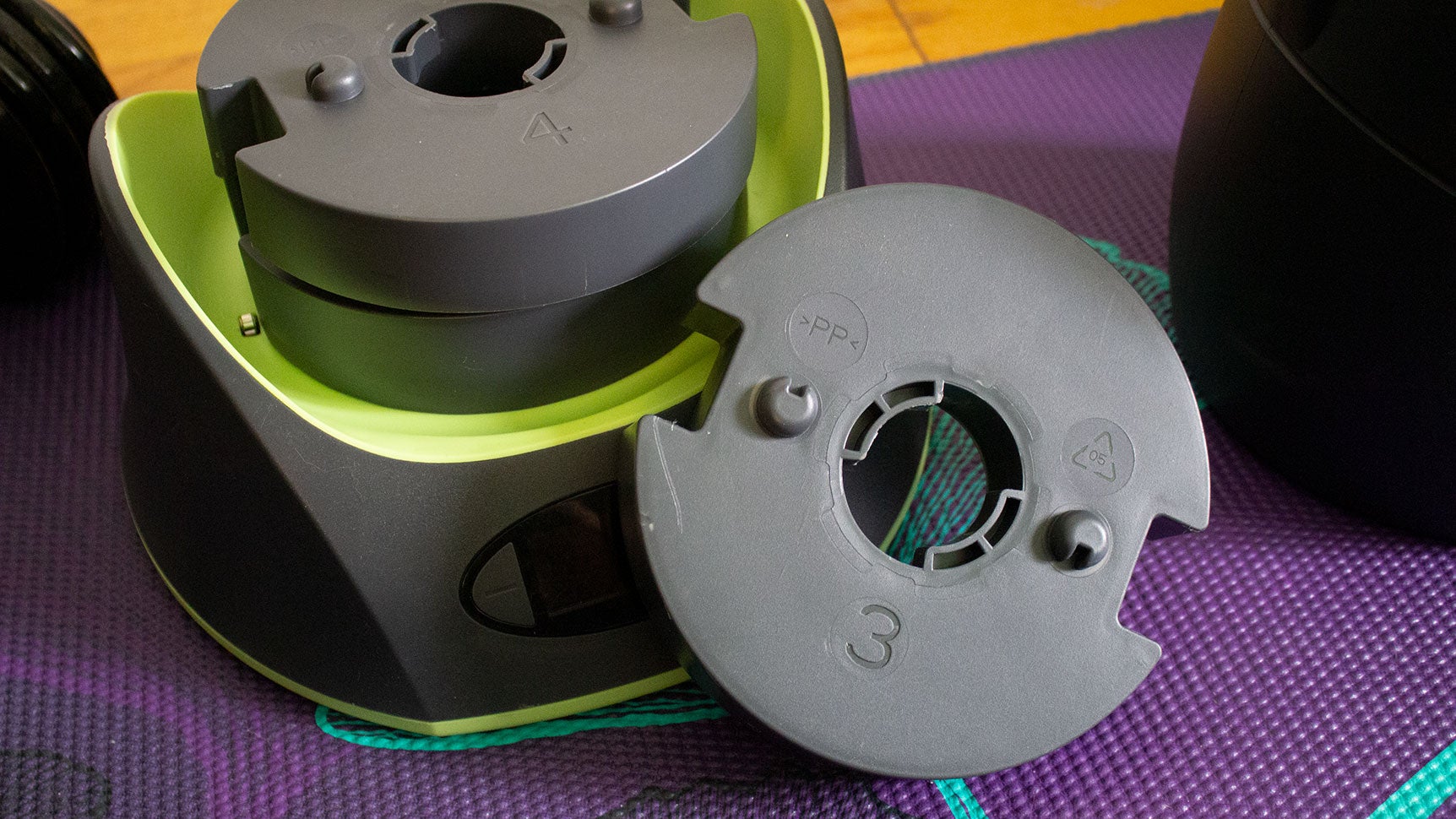 There are 5 disc-shaped weights total, each 6 pounds. The handle + shell itself are 12 pounds altogether. (Photo: Victoria Song/Gizmodo)

Even without an additional subscription, the KettlebellConnect itself is expensive at £230. That cost is kind of hard to stomach. Regular adjustable kettlebell sets with similar weight ranges are a fraction of that price. I found some as low as £50, and a few fancier ones around £150-£180. That’s a hefty premium for connected features that aren’t quite worth it.

However, we are in a pandemic, and exercise equipment can be hard to find online right now. If for whatever reason all the cheaper options are out of stock, the KettlebellConnect itself is well made and will get the job done – even if the app isn’t really worth it. Otherwise, I’d say you’re better off going with a cheaper adjustable option and YouTube-ing some kettlebell videos.