This Depth-Sensing, Laser Measuring, Touchscreen Drill Is the Smartphone of Power Tools

Despite companies desperately trying to come up with reasons to add a screen to every appliance in your house, your fridge and toaster probably work just fine the way they are. And while a drill with a touchscreen also seems like complete overkill, the creators of the xDrill have at least come up with some genuinely useful applications for the upgrade.

Like any drill you can find at your local hardware store, Robbox Inc.’s xDrill works in forward and reverse, accepts standard bits with a twist-to-tighten chuck, and it’s powered by a 21-volt rechargeable battery good for two to three hours of making holes. The drill’s gleaming white finish is probably the first thing you notice, and anyone who’s ever spent any amount of time building, making, or hanging out at a construction site, will wonder how many minutes it will take for the tool to become filthy and dirty. But the next feature that stands out is a circular multi-function touchscreen on the back.

The screen’s most basic use is as a digital level, ensuring the drill bit is entering a material at the desired angle, like perfectly horizontal if you’re drilling into a wall to hang art, by simply ensuring a small dot is aligned in the centre of a crosshair. But the level can be recalibrated, allowing other angles to be dialled in if you needed a hole at 45 degrees, for example. It can even remember the exact angle of a hole you just drilled by hand, allowing you to perfectly recreate it in other locations. 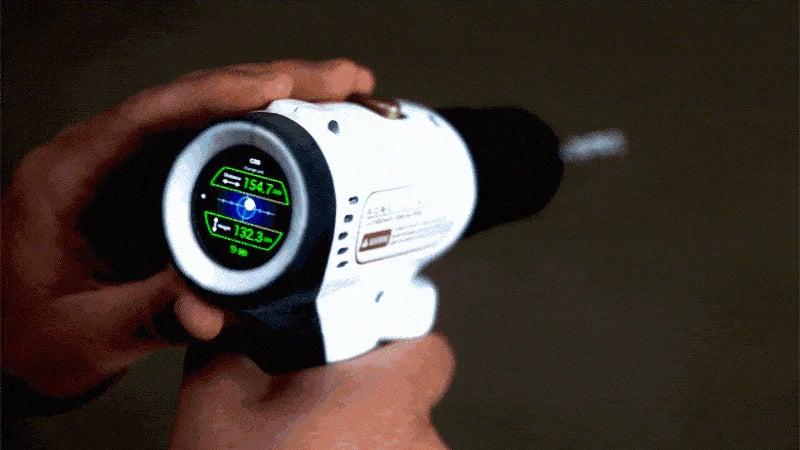 Anyone who’s ever carefully measured and applied a piece of tape to a bit to ensure they only drill to a specific depth, the xDrill can do all that for you. Using the touch screen you can program a depth, in inches or centimetres, and the drill will automatically stop when the bit has reached that limit. The tool can also measure other distances using a pair of built-in laser rangefinders. If you wanted to drill a hole five feet from a wall and three feet off the floor, you could just use the touchscreen to set those distances and the xDrill will let you know when you’re on target. Goodbye tape measures.

The xDrill’s touchscreen also includes a series of menus giving you access to other settings for the drill, such as adjusting the speed and torque depending on what materials you’re actually drilling into (plastic, wood, metal. etc.) and the size of the hole or drill bit you’re using. It sounds just as useful for amateurs who aren’t already familiar with using a drill effectively, but also professionals who really want to fine-tune its performance.

And yes, there’s an app for that too. The software connects over Bluetooth providing a slightly more comfortable user interface for making adjustments to settings like speed and torque, or for simply finding the drill in case you forget where you set it down in your workroom.

As for the catch? Yes, this is another crowdfunded product that’s going the Kickstarter route to raise the £17,500+ its creators need to put the xDrill into production. The usual caveats apply, especially during a pandemic where hitting manufacturing deadlines is challenging for even companies like Google and Apple, but the xDrill looks like it exists well past the prototype stage. Pre-ordering one requires a pledge of around £234 which isn’t that far off from the cost of a high-end drill that a contractor would choose. Although the xDrill includes just a single battery, and given all the upgrades, it might not be as capable at shrugging off the daily wear and tear that a construction site can dole out.