This Powerful Retro Handheld Almost Puts the N64 in Your Pocket

It didn’t take long for the handheld emulators coming out of China to get powerful enough to finally play N64 games, which is impressive – N64 is a notoriously challenging console to emulate. The RK2020 is among the first batch of portables that can play classics like Super Mario 64, and while it doesn’t emulate every N64 game perfectly, it’s already one of the better handhelds available.

Note: A sample of the RK2020 was provided to Gizmodo by online retailer Playkaka.

Despite the fact it’s from the previous generation of handheld emulators, we still recommend the Anbernic Retro Game 350 as the best value if you’re looking for an easy-to-use portable console that can handle 8- and 16-bit titles, while also doing a decent job at emulating more powerful 3D machines like the original PlayStation. But the RG350's specs – a 1GHz, dual-core processor and half gig of RAM – are starting to feel dated, and it lags behind the RK2020, which is powered by a 1.3GHz quad-core ARM processor and a full gigabyte of memory.

What is it?: A handheld console capable of playing countless retro games through emulation, including many N64 games.

Like: Beautiful screen, an excellent analog joystick that doesn't sit too high, and a powerful processor for emulating consoles beyond the original PlayStation.

Dislike: Games are stored on the same microSD memory card as the Linux OS, making it kind of a pain to load ROMs without resorting to a USB wifi adapter.

The RK2020 definitely feels like a step-up from the RG350 in terms of performance, and since the two consoles are priced nearly identically, which one you should choose will come down to personal preferences, the types of games you want to play, and how comfortable you are with jumping through some technical hoops to load your ROMs. 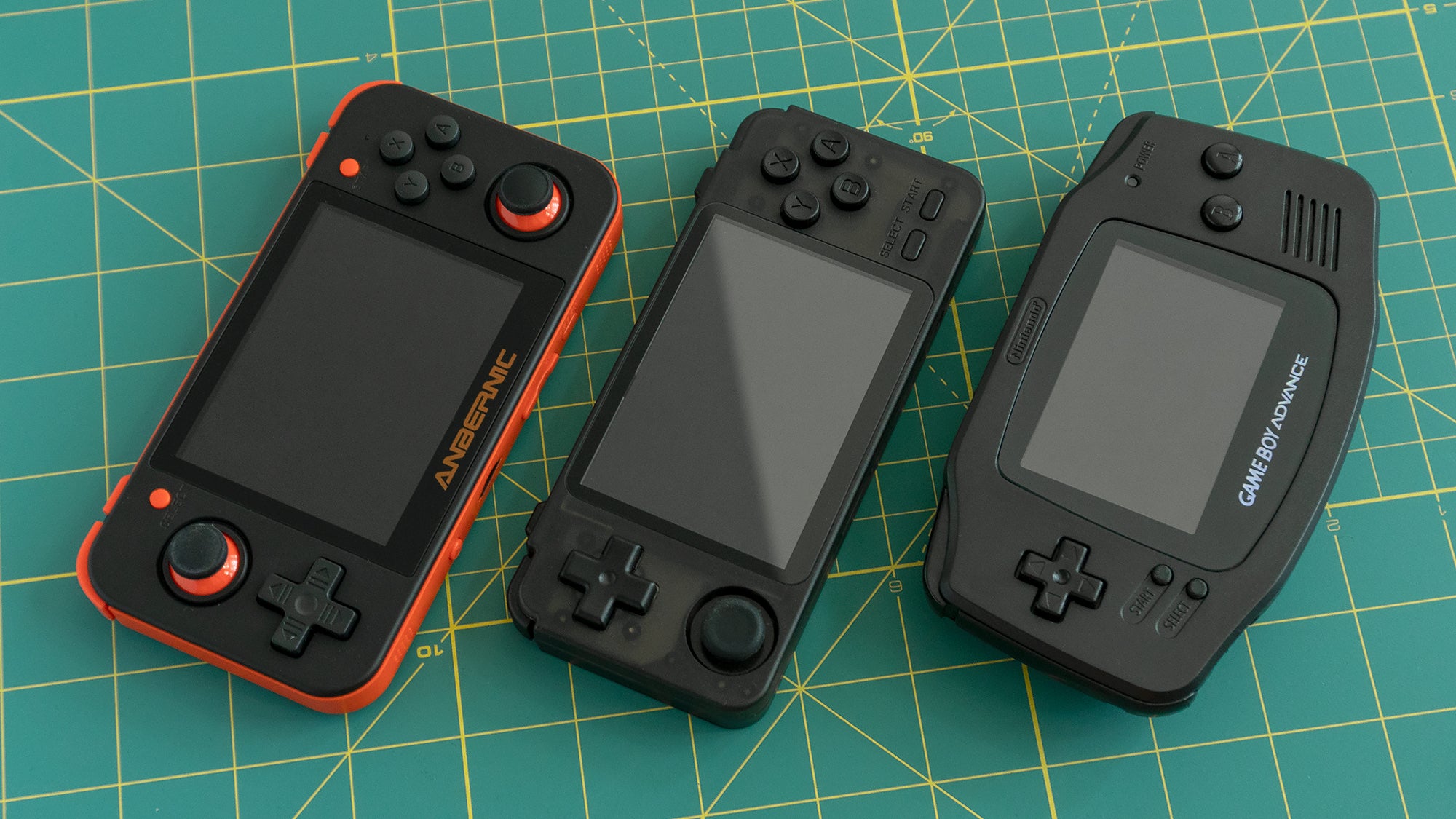 The RK2020 (middle) hits a sweet spot in terms of size between the RG350 (left) and the original Nintendo Game Boy Advance (right). (Photo: Andrew Liszewski/Gizmodo)

Only slightly smaller than the RG350, the RK2020 is actually a little thicker but still easier to slip into a pocket thanks to a low-profile joystick. However, build quality, including the type of plastic used for the housing, feels a little cheaper than the RG350, presumably because the RK2020 is actually designed to be a more affordable clone of another popular handheld – an issue I’ll touch on later. That’s not to say the RK2020 feels like it’s about to fall apart at any second. The hardware is still quite solid, there are just some design choices that were obviously made to cut costs, such as the use of a plastic screen cover which is more easily scratched.

The recessed analog joystick on the RK2020 (left) makes the handheld easier to pocket, and it has less travel and is slightly looser than the joysticks on the RG350 (right), which I prefer. However, you only get one. (Photo: Andrew Liszewski/Gizmodo)

The four-way directional D-pad on the RK2020 (right) is smaller than the RG350's (left) but feels better under thumb. (Photo: Andrew Liszewski/Gizmodo)

I don’t love the feel of the RK2020's action buttons (left), they’re a little loose for my tastes, but they are softer to press than those on the RG350 (right) if you’re a button masher who loves topdown shooters. (Photo: Andrew Liszewski/Gizmodo)

I love the tiered shoulder buttons on the RK2020, which makes them feel distinctly separate and the smaller button easier to find. (Photo: Andrew Liszewski/Gizmodo)

Some users have criticised the feel of the RK2020's analog joystick and its limited travel. Out of the box it isn’t ideal, but an included rubber cover improves its usability, and I do prefer the recessed design compared to the sticks on the RG350, which simply sit too high. However, the RK2020 includes just a single analog joystick, which makes it challenging to play games that were designed for consoles with controllers like the PlayStation DualShock, so keep that in mind.

The RK2020's four-way D-pad is excellent, with rounded edges that make it really comfortable to play with, and while the action buttons feel a little loose, they’re quite soft and perfect for button mashing your way through old-school top-down shooters and fighting games. I also really like the tiered layout of the RK2020's shoulder buttons, with the L2 and R2 buttons sitting slightly higher than the L1 and R1 buttons, making them easy to find by touch alone. Moving forward, every handheld with four or more shoulder buttons should copy this approach.

On the top of the RK2020 you’ll find a USB-A jack for connecting peripherals, a USB-C jack for charging, and an incorrectly placed headphone jack. (They should always be located on the bottom of devices with a screen.) (Photo: Andrew Liszewski/Gizmodo)

A tiny recessed dot serves as the RK2020's power button on top, which is not always easy to press, and putting the headphone jack on the top of a device with a screen is always a no-no. It also doesn’t have a dedicated volume dial or buttons, requiring you to memorise a combination of other buttons, which I find annoying. Charging over USB-C is convenient, and an additional USB-A port for attaching peripherals like a wifi dongle is a nice inclusion, but it also contributes to my biggest complaint with the RK2020. 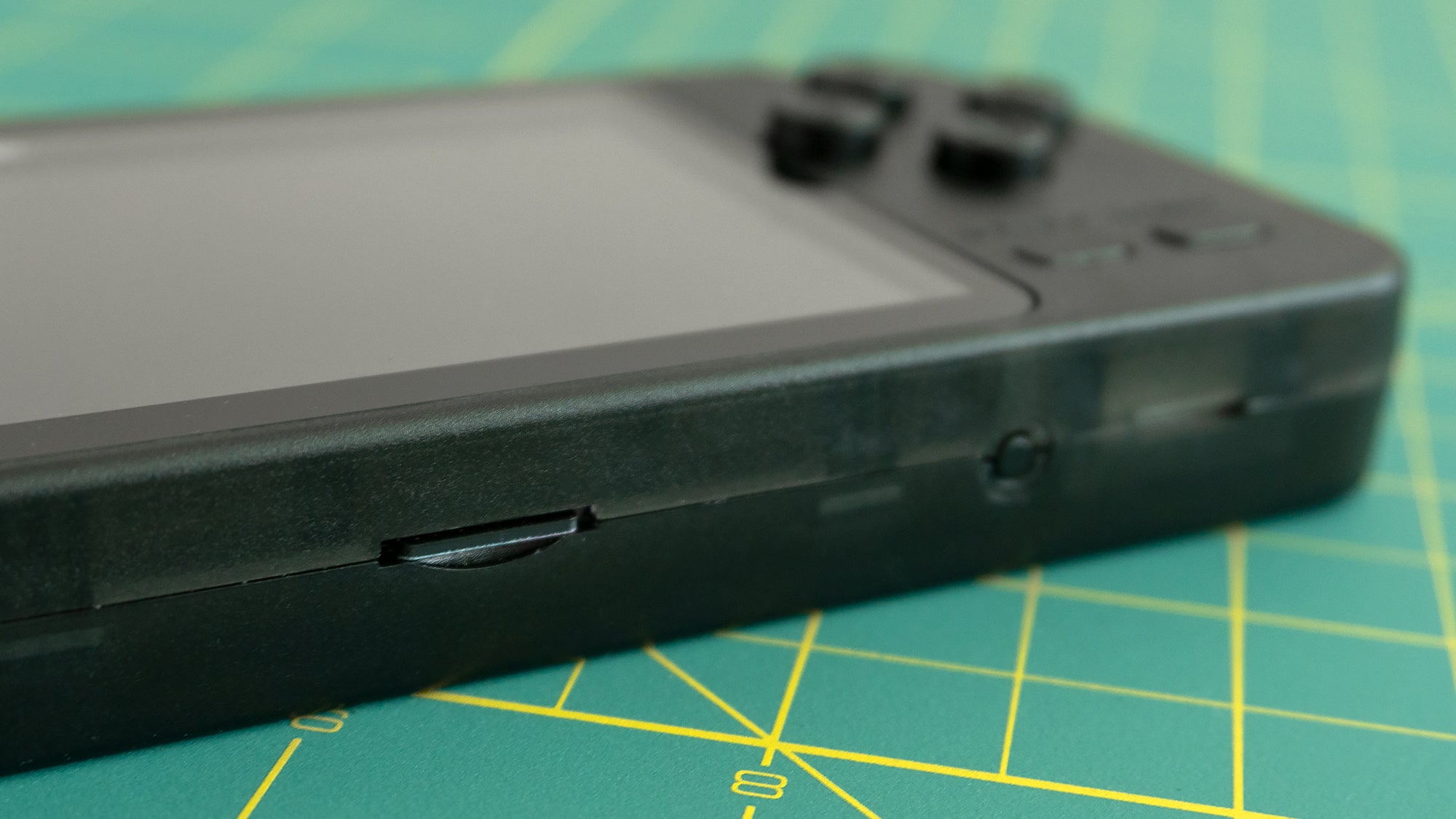 On the bottom you’ll find a reset button, a slot for the speaker, and a single microSD card slot, which is one of the handheld’s biggest challenges. (Photo: Andrew Liszewski/Gizmodo)

On the bottom of the console you’ll find just a single microSD card slot, similar to the RG350. But unlike the RG350, which has a second memory card hidden inside where the operating system is stored so that games can be easily loaded onto the externally accessible card, the RK2020 puts everything on just a single card. Given the device’s operating system and emulators are all built on Linux, it means you can’t simply pop the memory card into a Windows or macOS computer and expect it to mount as a drive you can easily copy files to.

There are a few approaches to actually getting your ROM files onto the RK2020. The ‘easiest’ is to buy a wifi dongle, attach it the console’s USB-A port, and transfer files wirelessly to it. The other is to use paid software (from companies like Paragon) that allow Windows PCs to mount and access memory cards configured with a Linux file system. Neither are terribly complicated if you’re comfortable with computers, but I much prefer the simplicity of handhelds that include a second memory for the ROM files.

It’s probably also a good time to point out, once again, that playing games using ROM files, not the original cartridges or discs, is a legal grey area and an added challenge to using devices like these. Most require you to find and supply your own ROM files, and if that’s not something you’re comfortable with, you’re better off sticking with ‘official’ handhelds such as the Nintendo Switch or digging up an original Game Boy to get your retro gaming fix. 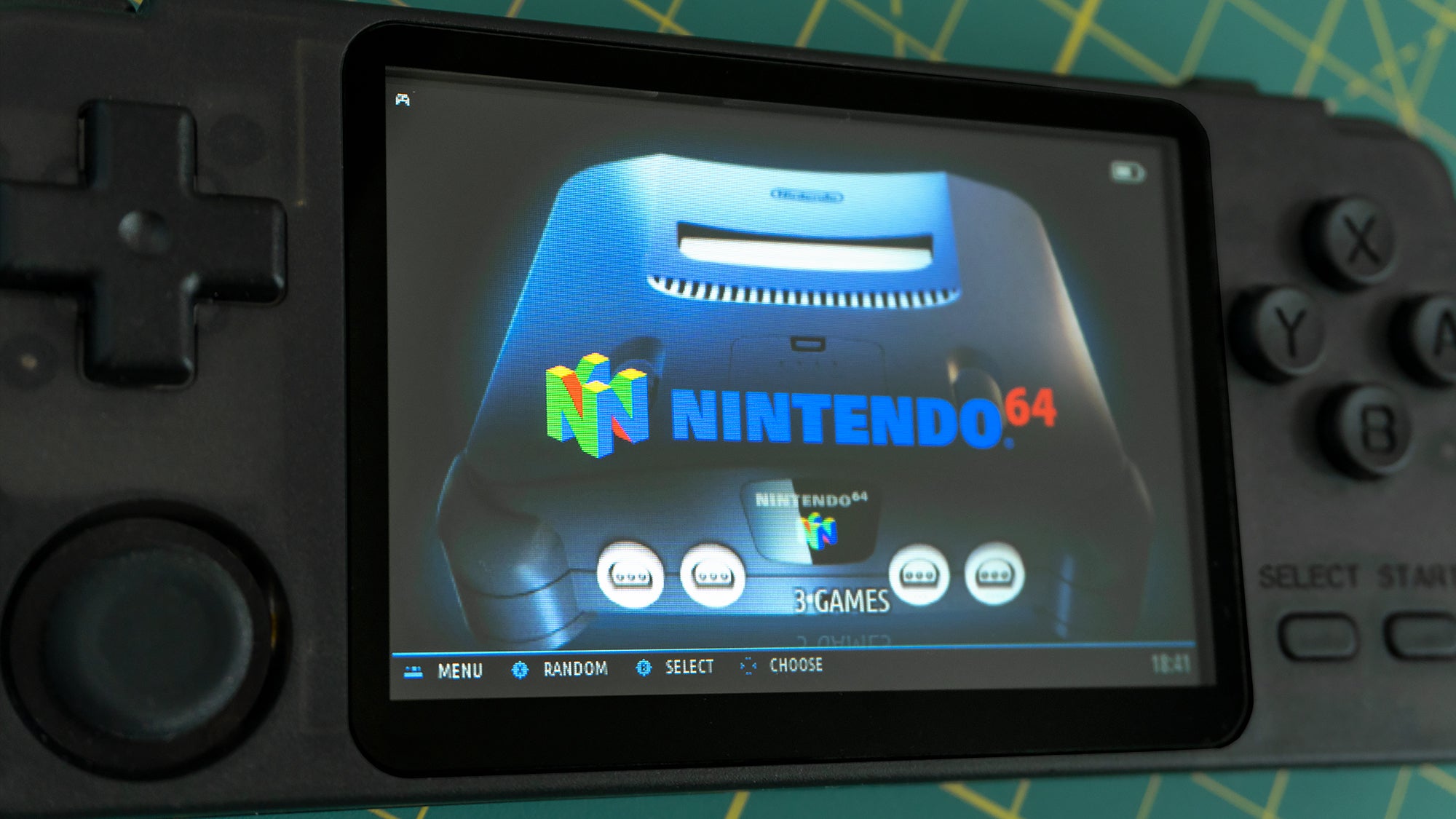 The RK2020's screen resolution pales in comparison to smartphones, but it ranks as one of the better displays in these types of devices. (Photo: Andrew Liszewski/Gizmodo)

Despite a slight bump in resolution over the RG350 – 480x320 compared to 320x240 – the RK2020's screen looks fantastic with bright colours and excellent viewing angles. You can still make out individual pixels if you look close enough, but more resolution also means more processing power needed to play games without slowdowns, so given its size, 480x320 works quite well for this screen.

So how well does it actually play games? There are currently a handful of pre-built operating systems that work with the RK2020, but most of my testing was done using a port of Batocera Linux. Older games from 8- and 16-bit systems like the Sega Genesis and Super Nintendo ran absolutely flawlessly, which is not surprising given the quad-core processor inside this thing. PlayStation support was also solid, but game performance is hit-or-miss once you start trying to emulate more advanced hardware on the RK2020, including the Sega Dreamcast and even the Sony PSP. If it’s a game that really pushed the original hardware’s capabilities, you can assume there’s going to be frame rate and performance issues when emulating it.

As for the RK2020's ability to play N64 games? From my own testing that was mostly a miss. Super Mario 64 was very playable, although it suffered from plenty of weird visual artefacts that were hard to just ignore, like shadows constantly popping on and off. With Mario Kart 64 there was a lot of slowdowns once a race got going, and sound effects were completely out of sync. As for putting GoldenEye 007 in your pocket? The experience was promising once I got the RK2020's controls properly remapped, but the gameplay got quite stuttery when the action on screen intensified. Tweaks can be made to improve problems like these, such as reducing frame rates, but I think there needs to be some considerable optimisations made to these emulators before I’ll try my favourite N64 games again. The RK2020 isn’t quite there yet. 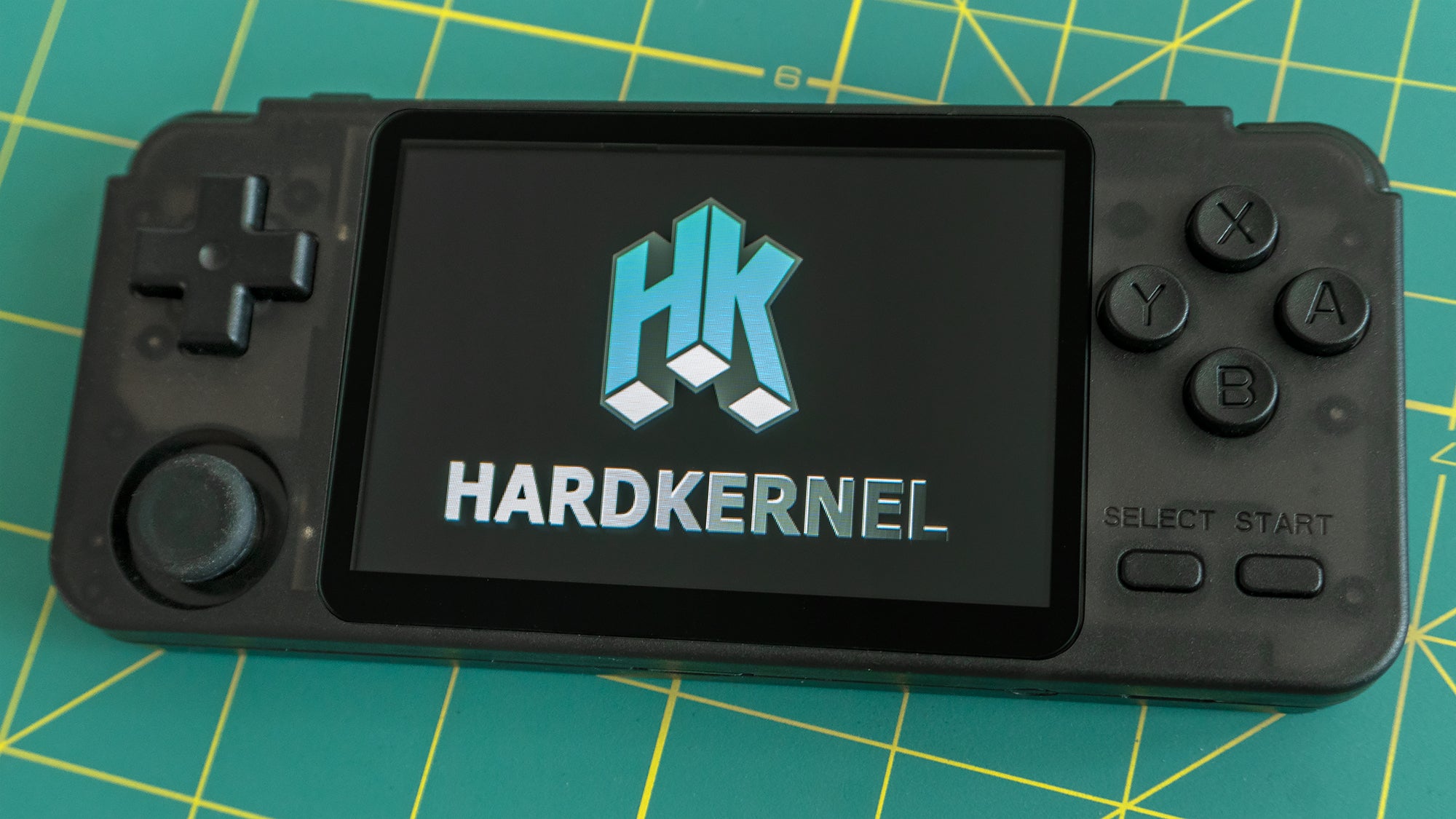 The RK2020 sample we were sent included the Hardkernel firmware developed for the ODROID GO Advance. (Photo: Andrew Liszewski/Gizmodo)

Even if you’re just sticking to 8- and 16-bit games, the RK2020 is a solid alternative to the RG350, while its improved ability to handle 3D games is an added bonus that makes it worth considering. However, as I mentioned earlier, the RK2020 is a direct clone of a handheld called the ODROID GO Advance from a company called Hardkernel. Not only was the hardware nearly identically copied, but for awhile the makers of the RK2020 were also installing the firmware that Hardkernel had developed specifically for the ODROID GO Advance, as was the case with the sample I was sent.

The creators of the RK2020 now claim they ship the RK2020 with no firmware at all, which potentially makes the device even more of a challenge to get up and running, and less appealing than the RG350 if you’re looking for a portable that’s easy to jump right into.