NASA is set to launch its next rover to Mars on 30 July, in what is certain to be an exciting new phase in humanity’s exploration of the Red Planet. Here’s what you’ll want to know about the Perseverance rover and why it’s our best bet yet for finding evidence of life on Mars.

When Perseverance lands on Mars in February 2021, assuming all goes well, the rover will be the fifth to reach the Red Planet, its predecessors being Sojourner, Spirit, Opportunity, and Curiosity. Perseverance is NASA’s most advanced rover yet, but to be fair, it’s heavily modelled after Curiosity, which has been trucking away on Mars since 2011.

“Perseverance is essentially version 2.0 of the Curiosity Rover,” Kenneth Farley, a Mars 2020 project scientist and a geochemist at Caltech, told Gizmodo.

Perseverance is scheduled to launch atop an Atlas V rocket from Cape Canaveral Air Force Base in the US on 30 July at 12:50 pm BST. NASA is managing to pull off the Mars 2020 mission despite the covid-19 pandemic (the same cannot be said for ExoMars, unfortunately). This is great news, given the limited launch window to Mars, which appears once every 26 months. 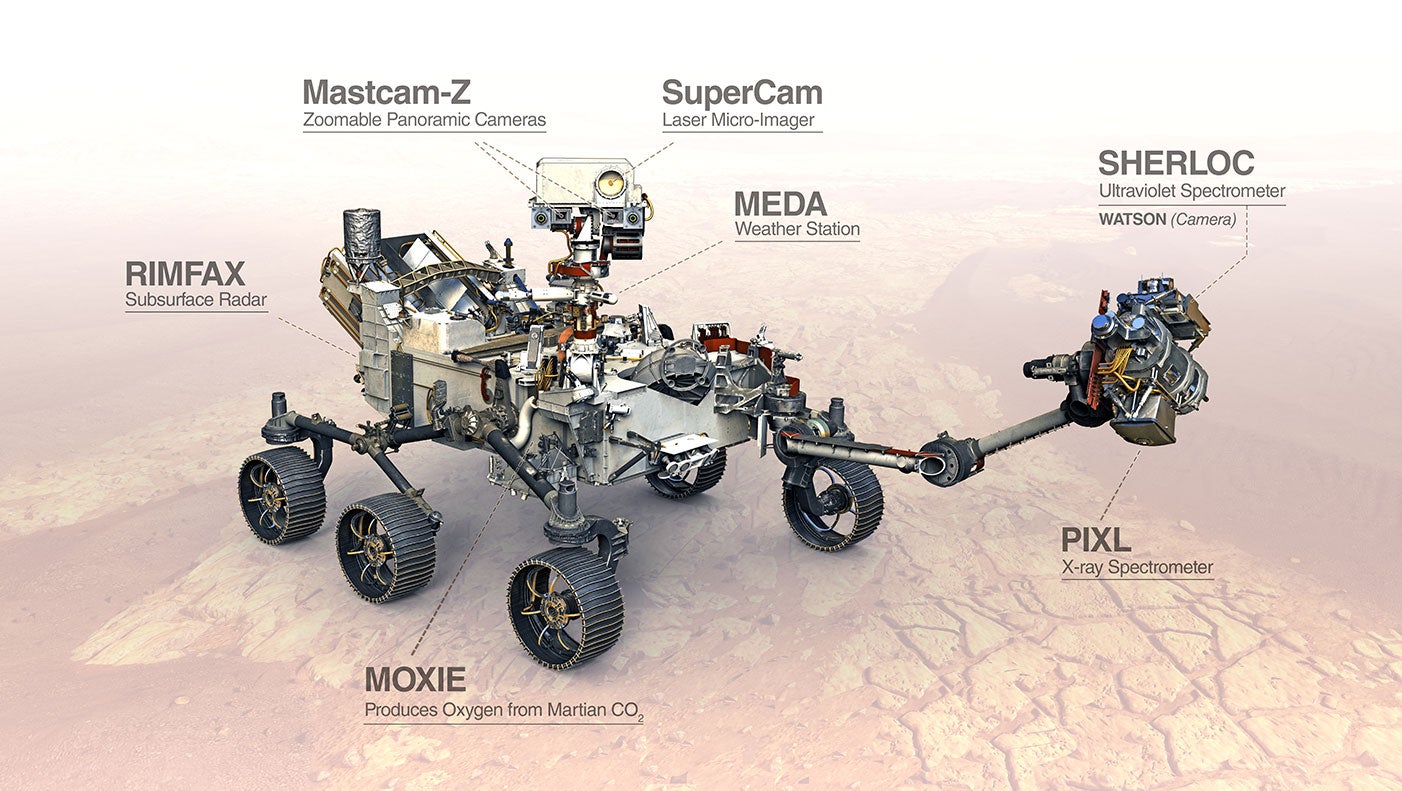 Following its seven-month journey to the Red Planet, the rover will land in Jezero crater – the site of a former lake and river delta. The $2.7 billion (£2.1 billion) rover will then spend the next two years searching for signs of ancient microbial life, analysing the planet’s geology and climate, studying rocks and sediment, launching a helicopter (yes, a helicopter!), demonstrating tech for future missions, and collecting and caching samples for a future retrieval mission, among other mission goals. But as previous rovers have shown, this mission, managed by NASA’s Jet Propulsion Laboratory, will likely last longer than the planned-for two years.

The rover is equipped with six wheels, each with its own motor and 48 cleats, which should provide excellent traction. The front and rear pair of wheels have their own steering motors, allowing Perseverance to turn a full 360 degrees while remaining in place. The rover’s legs will “enable the rover to drive over knee-high rocks as tall as 40 centimetres (15.75 inches),” according to NASA. 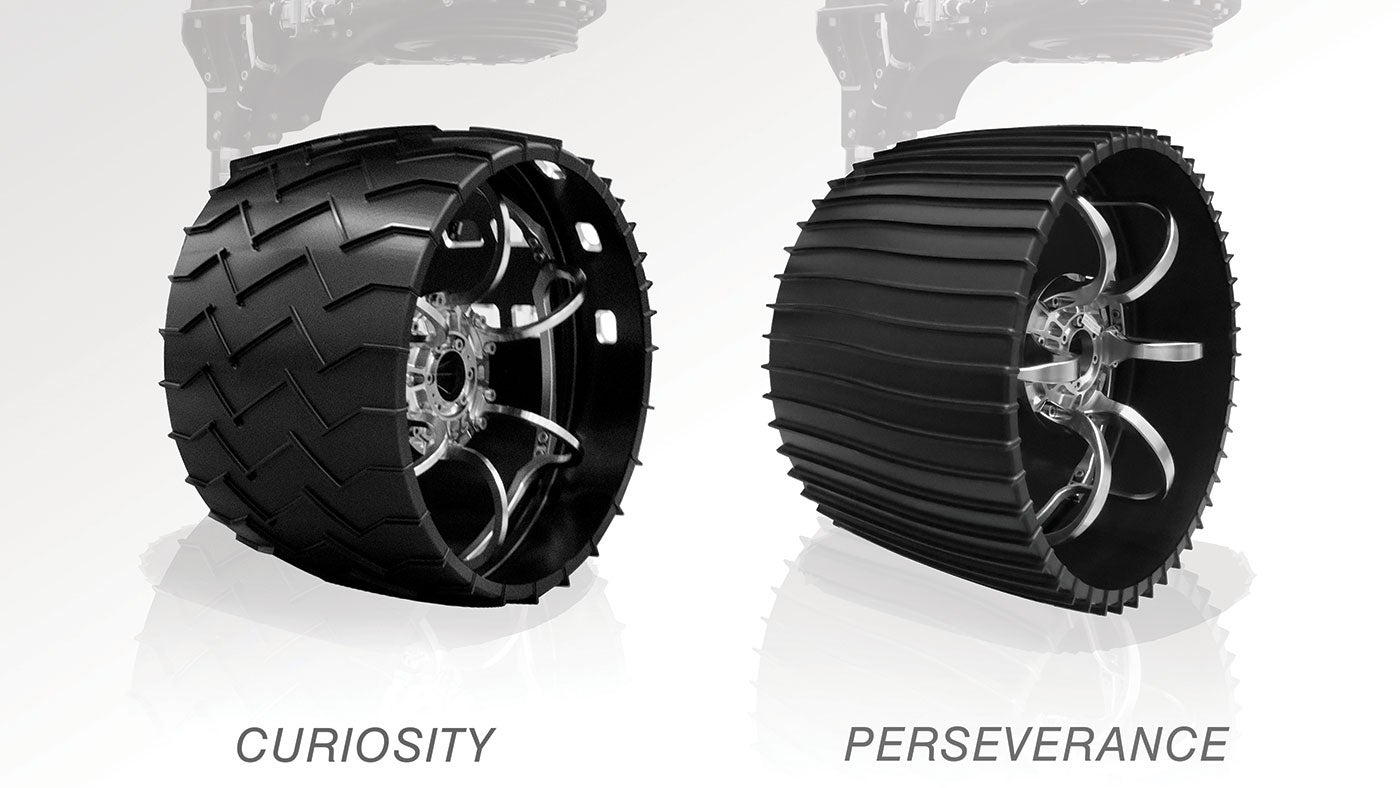 “One seemingly small but important change is a new wheel design, which should prevent the sort of ‘punctures’ encountered by Curiosity when traversing terrain with small sharp and pointy rocks,” Morten Bo Madsen, a Mars 2020 project scientist and astrophysicist at the Niels Bohr Institute, wrote in an email to Gizmodo. “The new wheels have a slightly reduced width, and the ‘thread’ of the wheels is thicker and more robust.”

The Perseverance mission will also include an “additional processor to allow the rover to autonomously drive further and faster and to adopt a capability that allows the spacecraft to navigate itself to a safe touch-down point during landing,” Farley said.

This last capability is important, he said, because it means NASA can land right next to dangerous rock outcroppings. Right from day one, Perseverance will be located near to exciting science targets, “instead of having to make a long journey to them from a hazard-free landing zone,” Farley said.

Perseverance will also be more efficient than its predecessors.

“Taking samples from the surface and analysing them inside the rover takes time,” Svein-Erik Hamran, a Mars 2020 project scientist and a researcher at the University of Oslo, explained in an email to Gizmodo. “Perseverance has remote-sensing instruments and proximity instruments that speed up the instrument data collection and increase the speed of the rover,” said Hamran, adding that “Perseverance will cover more terrain than previous rovers.”

The rover’s suspension system, a so-called rocker-bogie system, will make it possible for the rover to traverse uneven terrain. Incredibly, the rover is designed to endure tilts of 45 degrees without falling over, but NASA doesn’t plan to let it go beyond a 30-degree angle. 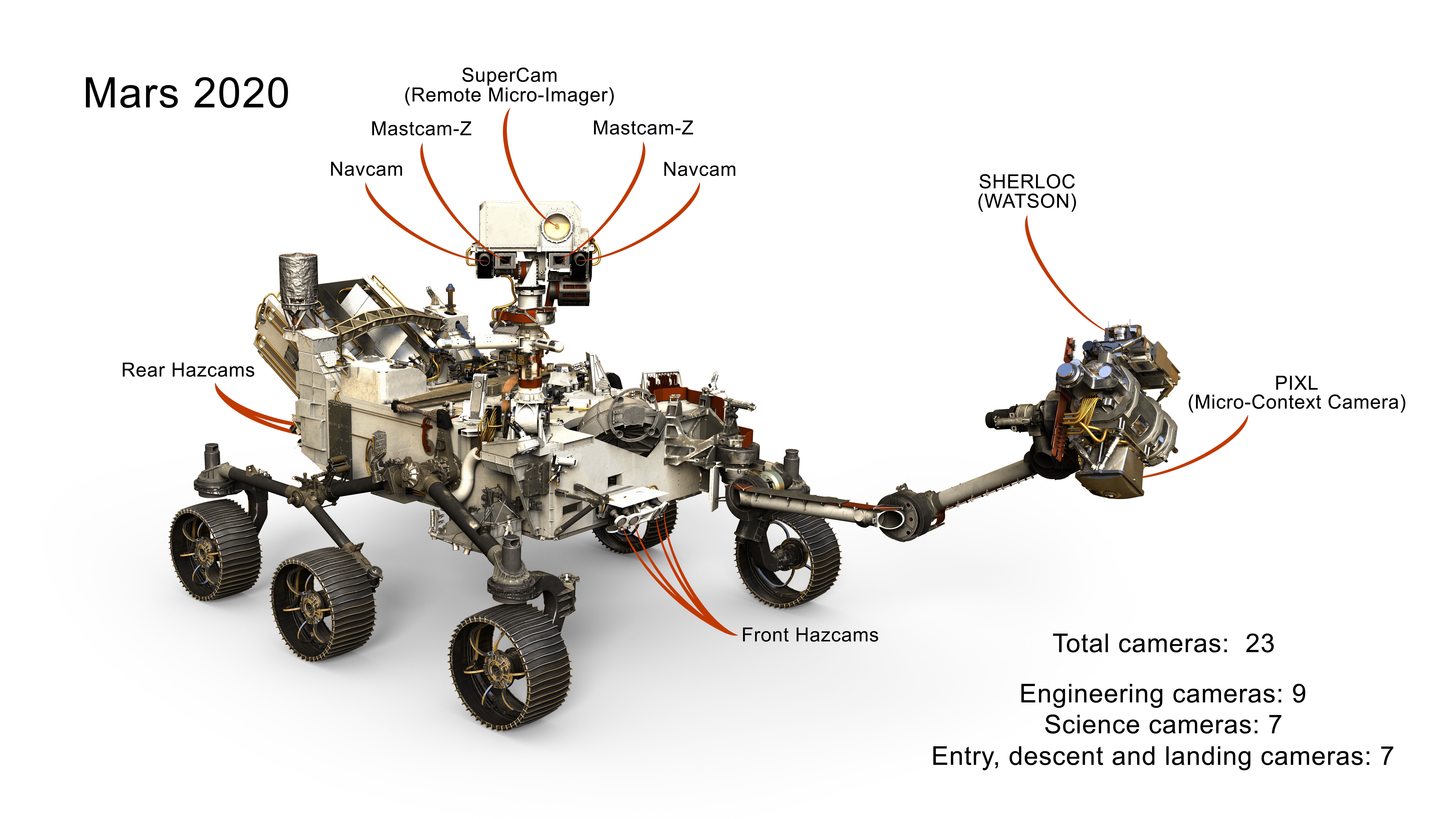 A total of 23 different cameras were included for the Mars 2020 mission, including nine engineering cameras, seven science cameras, and seven cameras for the entry, descent, and landing phase of the mission. Including a pair of microphones, this mission has an impressive assortment of eyes and ears.

Mastcam-Z will take panoramic, stereoscopic, and zoomed-in images of the Red Planet (Curiosity’s Mastcam can’t zoom, hence the added “Z”). This camera will assist with the rover’s navigation, but it’ll also be used by mission scientists to, for example, identify the mineralogy of the surface. The rover’s SuperCam, in addition to normal imaging, will be used to “identify the chemical composition of rocks and soils, including their atomic and molecular makeup,” according to NASA. 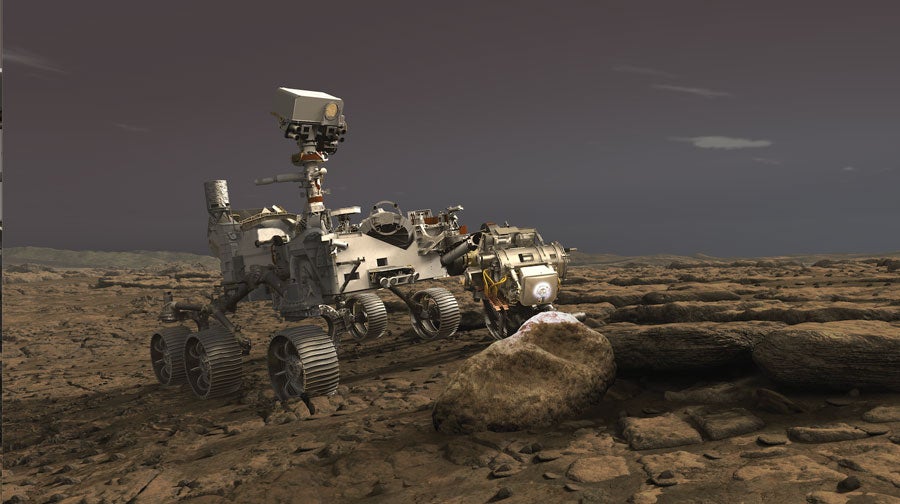 Depiction of NASA’s Perseverance rover using its Planetary Instrument for X-ray Lithochemistry (PIXL) instrument to analyse a rock on the surface of Mars. (Image: NASA/JPL-Caltech)

Using the Mars Environmental Dynamics Analyzer (MEDA), the rover will measure the speed and direction of winds, air pressure, humidity, and the size of dust particles. An onboard X-ray fluorescence spectrometer, called PIXL, will analyse chemical elements at fine scales, while an ultraviolet laser spectrometer, called SHERLOC, will provide microscopic images of the Martian surface. RIMFAX – a ground-penetrating radar – will allow scientists to analyse the area immediately below the rover and study its geological makeup.

“For the first time, a Mars rover will have the ability to look into the subsurface of Mars,” said Hamran. “The surface of Mars is obscured by a layer of dust, and now we will be able to look and see what is beneath.” 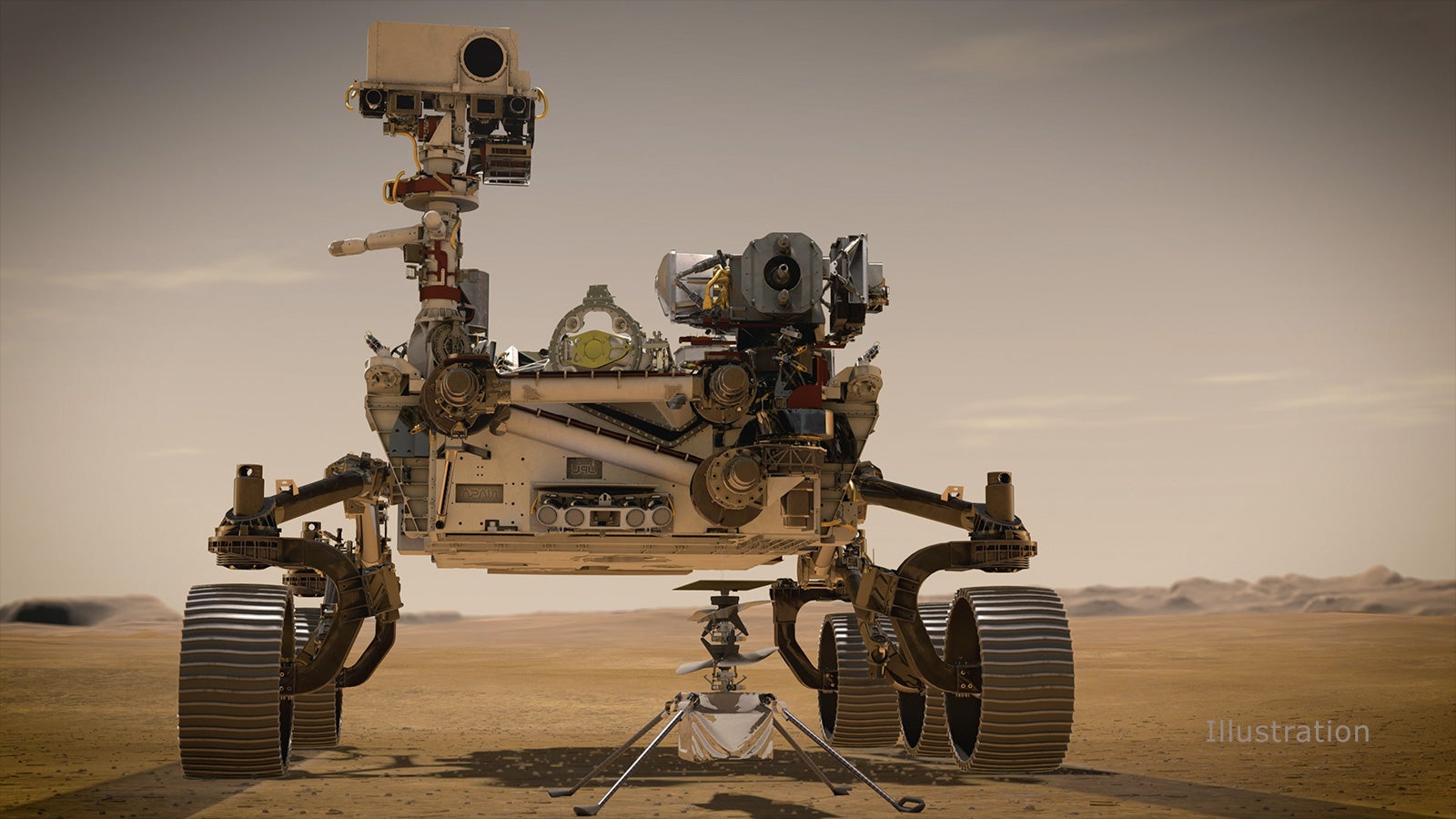 Perseverance will also deploy a helicopter named Ingenuity, in what should be the first controlled flight of an aircraft on another planet. Ingenuity is a kind of proof-of-concept project, and it’s only expected to make a small number of short flight tests. If all goes well, however, Ingenuity could pave the way for more ambitious aerial projects on Mars.

Perseverance will also try to produce oxygen from atmospheric carbon dioxide, as part of the Mars Oxygen ISRU Experiment (MOXIE). Success with this experiment would be a good sign for future explorers, as NASA explained in a recent release: “It’s an oxygen generator called MOXIE, designed to convert carbon dioxide – which constitutes about 96% of the Martian atmosphere – into breathable oxygen. This technology could evolve into bigger and more efficient oxygen generators in the future that would allow astronauts to create their own air to breathe and provide oxygen to burn rocket fuel needed to return humans to the Earth.”

One of the most intriguing and scientifically promising aspects of Mars 2020 is the Sample Caching System (SCS). For this part of the mission, Perseverance will pick up rock and soil samples within Jezero crater, place them in several small containers, and drop them onto the Martian surface for a future mission to retrieve and bring back to Earth.

“Martian samples returned to Earth would be investigated for a huge diversity of topics and will shed light on the possibility of ancient life on Mars, the puzzling warmer and wetter climate of early Mars, and the geochemical evolution of a broadly Earth-like planet that has remained little changed since 3.5 billion years ago,” Farley said. “To me, answering these questions with the certainty we can obtain with terrestrial laboratories is the most exciting aspect of the mission.”

As Madsen explained to Gizmodo, the earliest traces of life on Earth appear to have been erased by geological processes and the spread of life itself, but this may not be the case on Mars. Accordingly, he’s “particularly intrigued by the prospect of samples being brought back potentially with traces of life which is much older and maybe more primitive than anything we know on Earth and which may tell us about how life originates when the environment permits.” 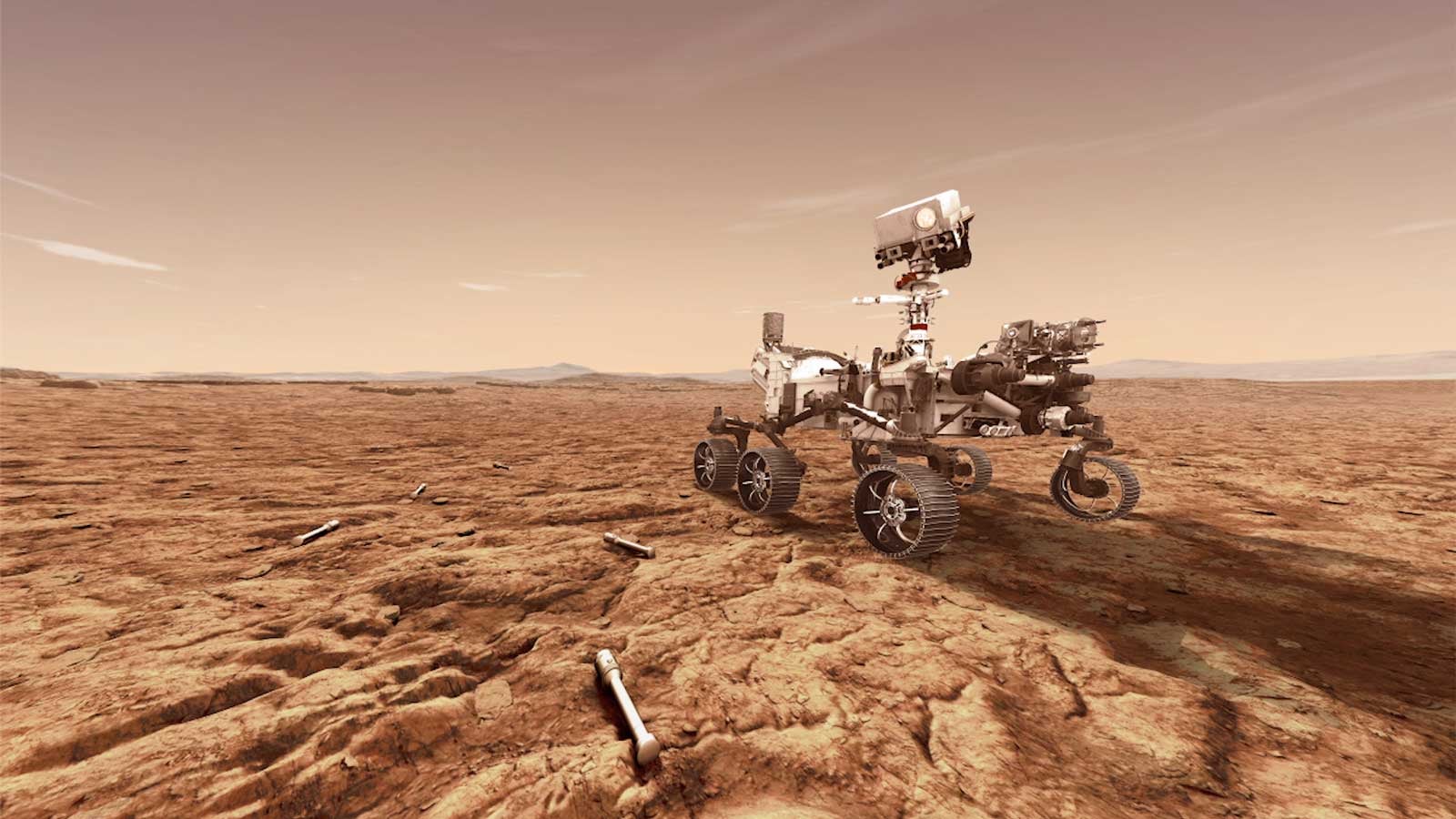 Artist’s depiction of Perseverance and samples caches dropped to the surface. (Image: NASA/JPL-Caltech)

SCS is a key aim of the Perseverance mission, which is why the rover’s instruments are geared toward reconnaissance. As Madsen told Gizmodo, its tools will help the science team find potential samples in the context in which they originally formed.

“Instead of a built-in ‘Science Laboratory,’ as in Curiosity, Perseverance has an intricate and extremely complex sample acquisition and handling system, in which the selected drill cores can be put in suitable containers, imaged in their containers which are subsequently sealed, and ready to be left in groups on the surface for later collection by a fetch rover,” Madsen told Gizmodo.

Which leads us to Jezero crater itself – a seemingly perfect spot for Perseverance to perform its duties. Located north of the Martian equator, this roughly 23-mile-wide (48 km) depression was once filled with water, fed by a rushing river delta. If primitive life existed on Mars a few billion years ago, it could very well have been in a place like this. Accordingly, Perseverance will hunt for fossilised organic remnants and other potential biosignatures dating back some 3 billion to 4 billion years ago.

As noted, we’ll have to wait until February 2021 and the harrowing “7 minutes of terror” during atmospheric entry before this mission gets rolling. Godspeed, Perseverance. Godspeed.